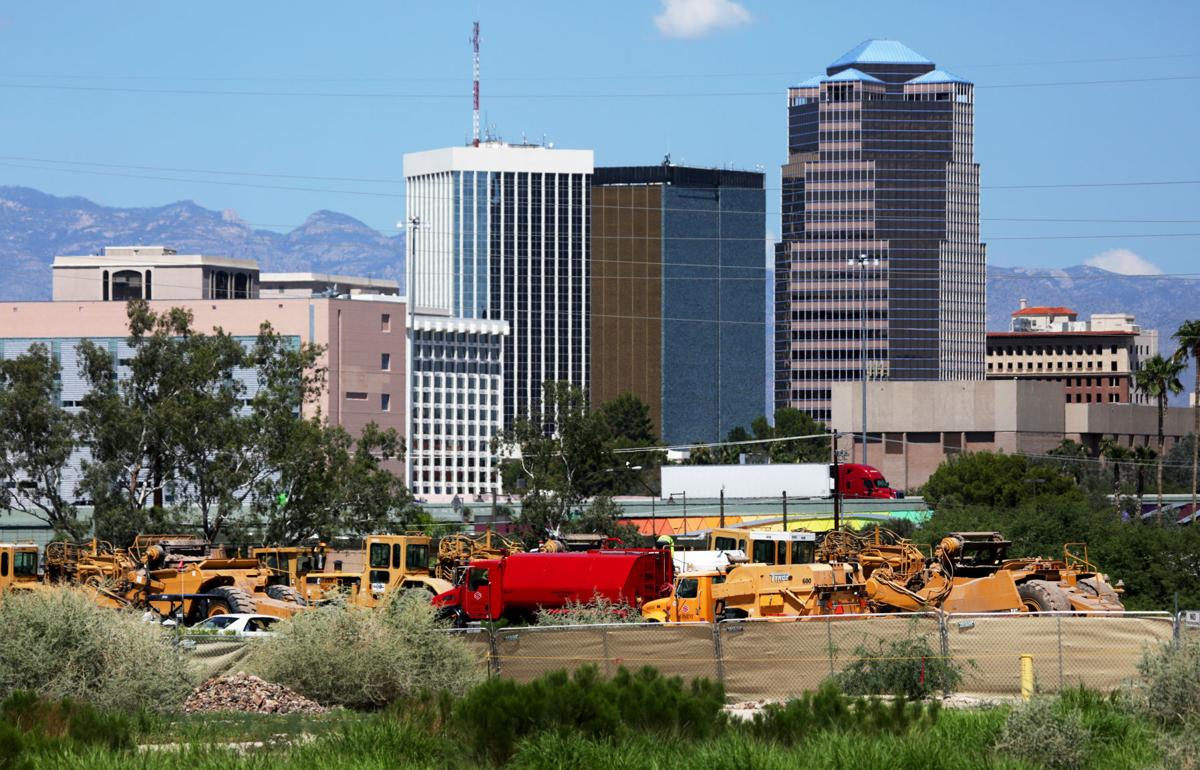 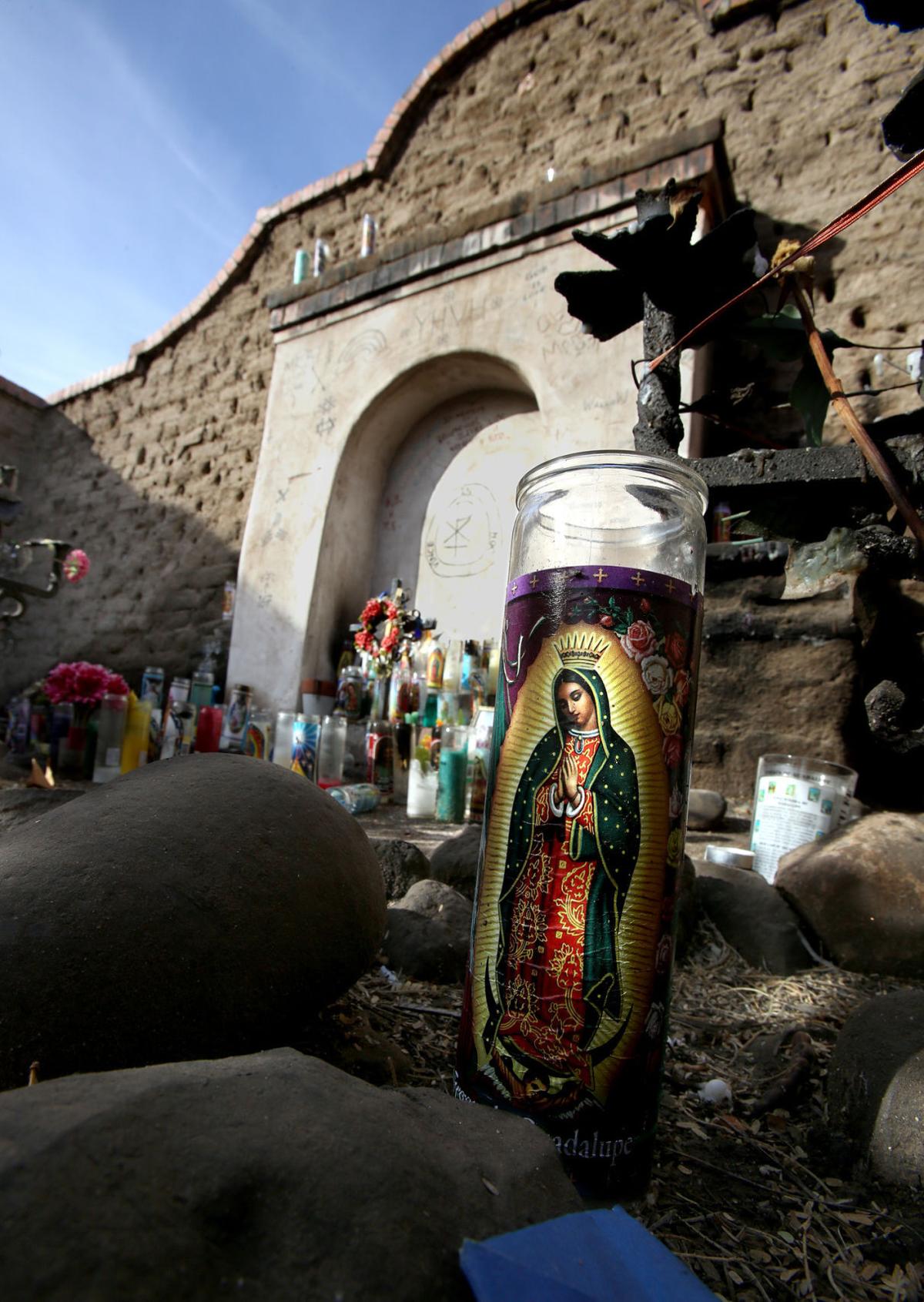 The El Tiradito shrine is south of the Tucson Convention Center, which was built after a major portion of the barrio was razed 50 years ago. People light candles at the shrine, seeking an answer to their prayers.

I grabbed the office phone on the third ring and a long-absent familiar voice flowed like the Santa Cruz after a hard summer rain.

“I’m back!” boomed the voice of I.K. Bruto, my long-time imaginary friend. “Miss me?”

I laughed. Not really, I told him. Although he had left town for 10 years, I often imagined him calling to razz me like he was doing now. Bruto had returned to a town where major changes have occurred downtown: the Sun Link streetcar, a new hotel and talk of more hotels, and new upscale condos, restaurants and bars.

“Dude, so much has changed since I left,” Bruto said. “Like I don’t recognize our town anymore. Is this really Tucson?”

I started to say something when he stopped me. “C’mon homes, let’s meet.” It wasn’t an invitation.

We met near Carrillo school on South Main Avenue, the border between Barrios Viejo and El Hoyo, just south of the 50-year-old cemetery known as the Tucson Convention Center, which sits atop the buried memories of what was once the heart of the barrio. He pointed to a white wall, where fresh brush strokes of a different shade of white covered some faint lettering. The corner building had been tagged.

“It said get out of the barrio,” Bruto said, rolling his Rs in a low rumble. “Shall I interpret for you?”

He didn’t need to.

There’s that word, hardly said aloud in public discussions about the changes occurring in the barrios in and surrounding downtown. Development. Addition by subtraction. Promises made but not kept.

No, I told Bruto. I heard it clearly the first time. Over the years, Bruto has challenged me, questioned me about changes in our beloved Tucson. We had similar experiences growing up in Tucson. But we often agree to disagree.

Bruto is skeptical about the alteration to Tucson’s core that have come and that will come. He thinks long-time barrio residents have been shortchanged and will continue to lose out as development encroaches, sending already high home prices even higher as the promised jobs are doled out to others.

He’s not averse to change; he knows all to well that Tucson has always undergone changes since the Spanish colonial flag was planted along the Santa Cruz River where native Pimas had long, deep roots.

Still, some changes rankle him.

“Look over here,” he said pointing to the line of earth-removal trucks lumbering in and out of the soon-to-be ex-vacant lot west of the freeway at the foot of Sentinel Peak. “This doesn’t look like they are building a cultural interpretive center to recognize Tucson’s origins. Remember Rio Nuevo?”

Yes, I answered, like I did when the nuns at the old All Saints Catholic School would sternly ask me if I loved Jesus Christ. Bruto was referring not to the new business-focused Rio Nuevo, but the original. In 1999, voters approved Rio Nuevo with the written commitment that Tucson’s birthplace would highlighted and celebrated.

A campus would be constructed at the base of “A” Mountain where a convento and the mission garden were established before and after the Tucson Presidio was created where the Tucson Museum of Art is located.

Instead, there is the small Mission Garden devoted to promoting our rich past supported by the fledgling nonprofit, Friends of Tucson Birthplace — with little to no help from Rio Nuevo.

“It’s gonna be a temple to gentrification,” Bruto said of the three-story, 150,000-square-foot building that Rio Nuevo is building for the earthmoving company Caterpillar. Rio Nuevo will spend $50 million to construct it and another $2 million for moving expenses. A state agency will kick in $4 million for moving costs.

Caterpillar, which will pay taxes and utilities, will have a 25-year lease and the option to purchase it after the lease terminates.

“At least a majestic, decades-old saguaro wasn’t sacrificed to get Caterpillar to come to Tucson,” he said not with a hint of sarcasm.

But the new corporate regional office will bring 600 executive jobs and generate economic growth for Tucson and the west side, I countered. If you ask people today if they would rather have jobs or a museum, they’ll say jobs, I continued.

“I get that,” Bruto said. “I also get that those good, high-paying jobs will largely go to engineers and white-collar workers from outside Tucson. Barrio residents will be looking in from the outside — again.”

Bruto was on a roll, as usual.

“And one more thing,” he said as I rolled my eyes. “Caterpillar is building in a floodplain.”

“Yeah, we may be in a desert, but that fancy-schmancy building needs to be elevated on a pad, make it four stories for the flood that will come.”

Oh, I’m sure the engineers have already figured that out, I said.

We continued going back and forth, as we have for years. While we didn’t agree, we agreed to pick up another time.

“Let’s go to Pat’s Chili Dogs,” Bruto said. “I haven’t been there in years. And you’re buying, Mr. Columnist.”

The memories of razed Barrio Viejo are blurring for many Tucsonans.

Cyclovia sights from the Lost Barrio in Tucson

Rain or shine Cyclovia pedals on in the Lost Barrio, which this time was the end of the route. This year's first roads without cars event took…

The former supervisor is the only applicant so far, though at least one other is considering it.

Thanks to Star readers 647 kids went to overnight summer camp

Weekly bell given for good deeds in our community.

The quarterback can be brilliant with the ball in his hands, but his well-being is paramount to Arizona’s success.

Transfer from Oregon has Utah undefeated heading into Friday's game at Arizona.

Temperatures should drop into the high-80s by this weekend.

Tucson's All Souls Procession is featured on the list.

We've collected a few front pages from newspapers.com to give you a look at some Sept. 19 papers in history. With a subscription to newspapers…

Protesting over President Trump's decision to end the DACA program.

The ruling says Suzan McLaughlin of Tucson is entitled to the same parental rights as if she were a man. The divorced couple's son was born through artificial insemination.

Tucson teacher and competitive eater Michelle Lesco set a world record Monday by eating a large bowl of pasta in just under 27 seconds, the Ar…

Arizona must run effectively to upset Utah; is the Wildcats’ offensive line up to the task?

The Wildcats will play at unusually traditional schedule times and dates this season.

See why UA's School of Dance has a solid national reputation

Students, choreographers strut out new works, and revisit old ones

The theater season is really heating up, and there are some exciting shows in town. If you haven’t seen The Rogue’s “Celia, A Slave,” this wee…

This year’s NLAAD is Oct. 19, a free, three-hour block party beginning at 5 p.m. on South Park Avenue in Lost Barrio.

Neto's Tucson: Son's memoir honors mother who raised 6 children on her own

“The Tortilla Maker” tells the story of a determined, successful immigrant family.

The Sonoran desert park for the Rio Nuevo downtown redevelopment and revitalization district was proposed in 2013.

The discussion will be about the future of the old city landfill at the eastern base of Sentinel Peak, the site of Tucson's birthplace.

Neto's Tucson: Pushing back against velodrome’s air of inevitability

I.K. Bruto and Neto talk about a pair of radio interviews about the proposed velodrome on Tucson's birthplace, at the foot of "A" Mountain.

Neto's Tucson: 'Dream on the dump' remains for Josefina Cardenas

Josefina Cardenas has spent all her nearly 58 years living along the banks of the Santa Cruz River, at the foot of Sentinel Peak. She reveres …

Neto's Tucson: A park on the old 'A' Mountain landfill?

"It is historic land. It's been inhabited by people for thousands of years."

The El Tiradito shrine is south of the Tucson Convention Center, which was built after a major portion of the barrio was razed 50 years ago. People light candles at the shrine, seeking an answer to their prayers.