Neto's Tucson: Saying goodbye to Padre Cheno, the 'people's priest'
Share this
1 of 3 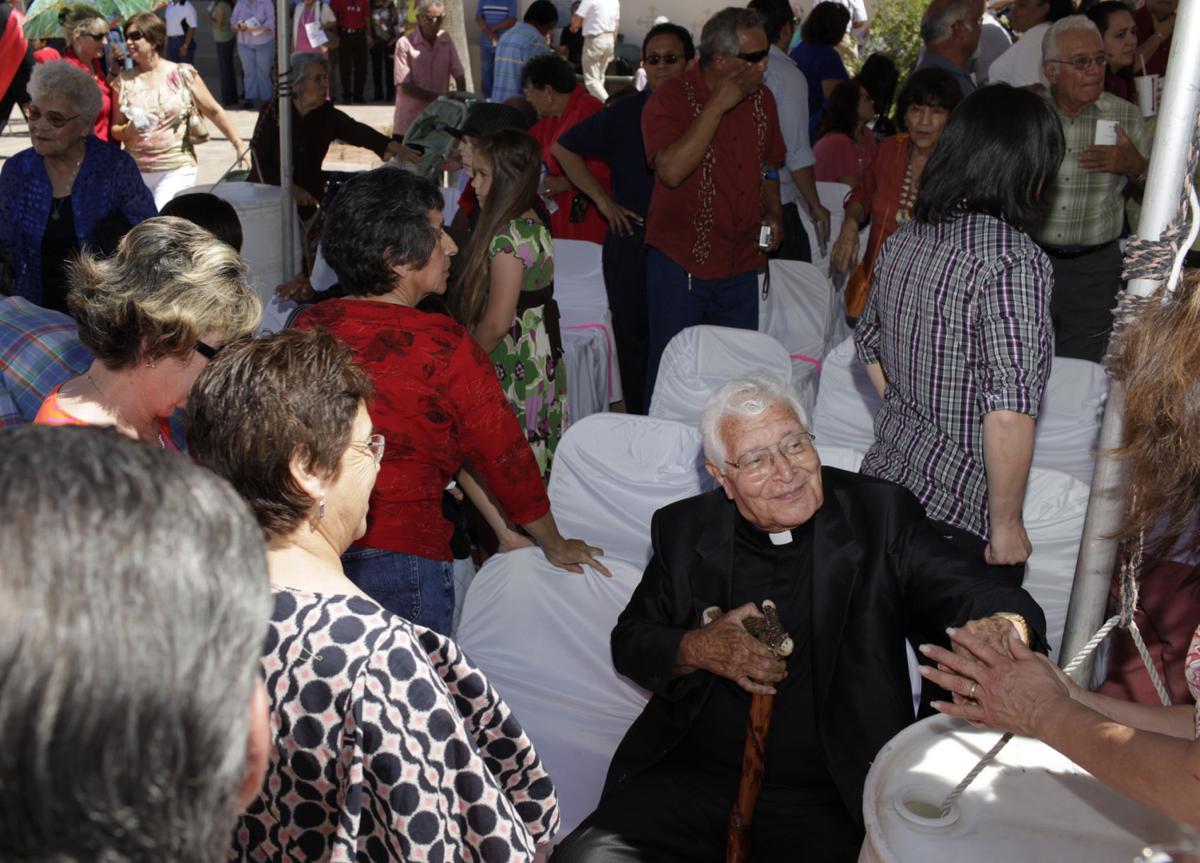 Monsignor Arsenio Carrillo is greeted by well wishers during the dedication ceremony for Monsignor Carrillo Placita at St. Augustine Cathedral May 31, 2009. The placita, which is open to the public, was built entirely with $1.3 million in donations and with no Rio Nuevo money. 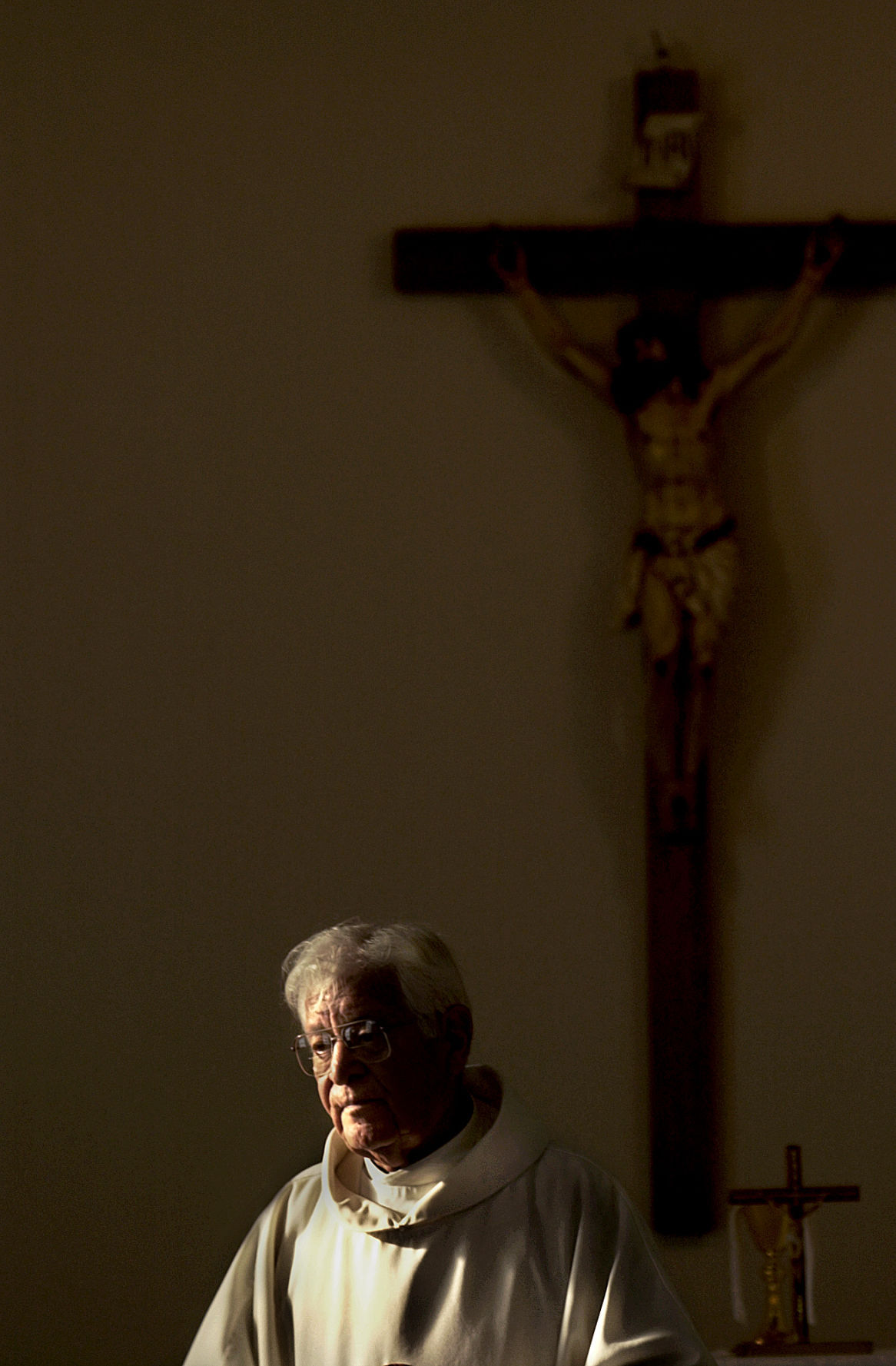 Above all, Monsignor Arsenio Carrillo relished being a priest, humble and devoted. He didn’t seek attention. 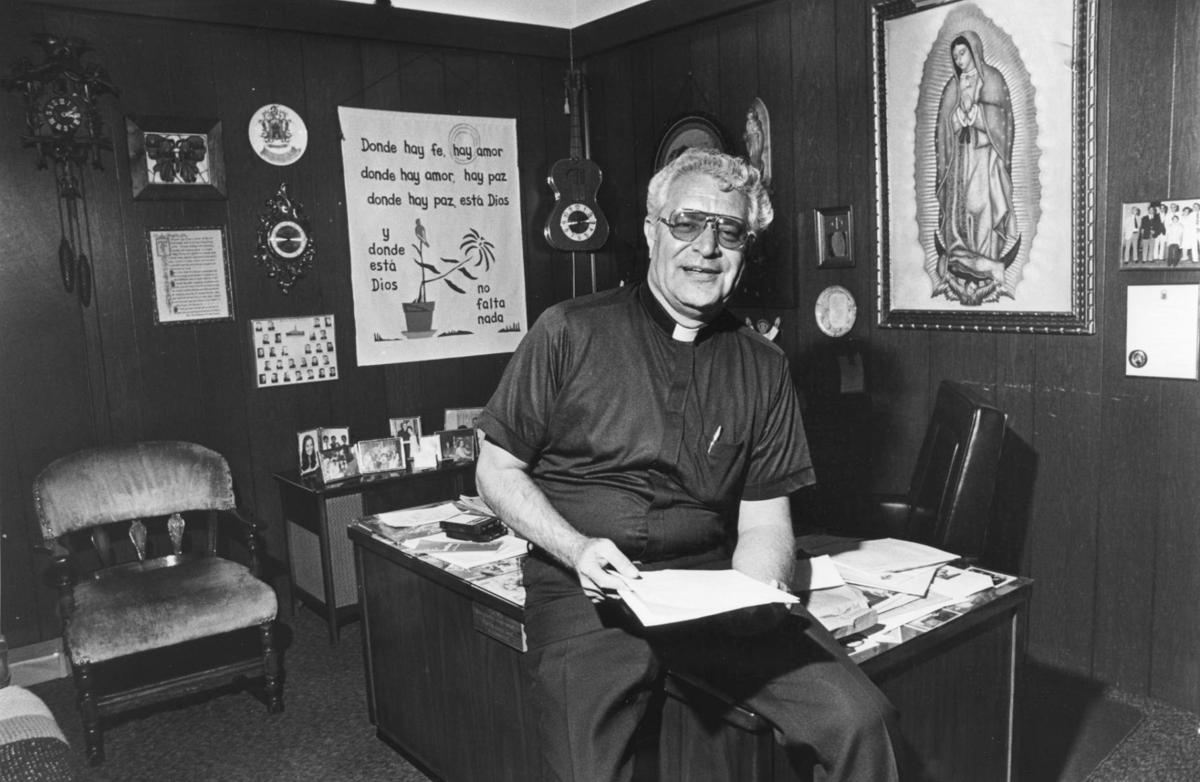 Msgr. Arsenio Carrillo in his office at St. Augustine Cathedral in Tucson in 1983.

The people’s priest was laid to rest Friday.

Monsignor Arsenio Sotomayor Carrillo, who for nearly 50 years ministered to Roman Catholics in Tucson and Southern Arizona, was eulogized and celebrated at St. Augustine Cathedral in downtown, where he first served as an assistant pastor in his initial assignment after ordination in 1956, and later as pastor and rector for more than 30 years beginning in 1969.

Monsignor Thomas Cahalane, pastor of Our Mother of Sorrows Parish, remembered his longtime friend and mentor for his humility, humanity and heart. The two priests met in 1969 and served together at the Cathedral, forming a deep bond of friendship and loyalty that extended over the years.

“I share the pain of your grief,” Cahalane said to the Carrillo-Sotomayor families at the beginning of his homily.

Carrillo, who was known to many as Padre Cheno, died April 26 at the northeast home where he had lived in his later years cared for by his family. He had turned 87 on April 2. He was one of the first Tucson-born, Mexican-American priests to serve in the Diocese of Tucson.

On the city’s west side two murals — one in Barrio Anita on the freeway frontage road and the other at the underpass of West St. Mary’s Road and the freeway — carry Carrillo’s images, a reminder of the spiritual and secular roles he played in many Tucsonans’ lives.

About three dozen priests and deacons, including Tucson Bishop Gerald F. Kicanas, led the funeral Mass attended by Carrillo’s extended family, many friends and acquaintances, some of whom were baptized or married by Carrillo.

Carrillo, was a “Pope Francis priest” long before the Pope Francis era, said Cahalane, referring to the current pope known for his pastoral ways and support of social issues.

Carrillo’s cousin, Frank Sotomayor, eulogized Cheno as a “dedicated priest of the people and for the people.” He said Carrillo “had a common touch that he exercised in an uncommon and remarkable manner” and “always had the right words” to share with someone in grief, troubled or in need of compassion.

Cheno always had a joke or a funny story to kick off his homilies, Sotomayor said, regardless if the punchline had any connection to the scriptures heard at the same Mass. But Carrillo had a talent and a touch for connecting with people with his meaningful and masterful homilies. He would lean into the pulpit, roll up the sleeves of his priestly garb and talk, simply and directly to churchgoers. And when he finished, Carrillo always asked those in the pews to pray for him.

“He was a giant of a priest,” Kicanas said.

While leading the Cathedral parish, Carrillo steered the congregation to a more active social role. He created CROSS, Christian Responsibility in Sharing and Service. He was a founding member of the Pima County Interfaith Council and promoted numerous parish activities such as the annual Christmas Posadas at San Cosme Chapel on West Simpson Street in Barrio El Hoyo just south of the Cathedral.

Above all, Carrillo relished being a priest, humble and devoted, taking Holy Communion to the sick or the elderly in their homes. He didn’t seek attention nor did he look to advance in the church hierarchy.

“As priests, Monsignor Carrillo said, ‘We are ordained to be with the people,’” Sotomayor said.

Carrillo was born in Barrio Anita, just north of downtown. He wasn’t expected to live. He and his twin sister Maria were born underweight and weak. She didn’t survive. Carrillo entered an Ohio seminary when he was 14 years old and was ordained on May 26, 1956. He celebrated his first Mass with his family at Holy Family Church where the family worshipped, and where Carrillo and his brothers were altar boys.

He was profoundly proud of his Mexican-American barrio roots.

And if Carrillo’s priestly contributions were not enough, credit him for the role he had in the growth of mariachi music in Tucson. A lifelong lover of mariachi music, Carrillo shared the music with a fellow priest, Charles Rourke, assigned to the Cathedral. Rourke, a musician, took to the music and formed a youth ensemble in 1964. Los Changuitos Feos, with two of Carrillo’s nephews, Randy and Steve, was the incubator for Tucson’s youth mariachi movement which thrives today.

To understand and appreciate Tucson is to have known Cheno. For in his life he was a spiritual leader and friend to countless Tucsonenses over several generations whose experiences reflected their hard work, perseverance, and faith in family and God. Cheno’s steady hand, dry and razor-sharp wit, and uncompromising devotion to his church and congregations, were his hallmarks.

He was Tucson’s priest.

Retired Msgr. Van A. Wagner of the Roman Catholic Diocese of Tucson dies

He served in six parishes and held diocesan leadership positions.

Enhancements for emblematic hill would include biking and walking paths, interpretive signs and shaded rest areas.

Neto's Tucson: A mariachi marriage that is about more than music

When their eyes met, they immediately knew. Nothing was said. Instead, they sang to each other.

Magdalena Majalca knew, 86 years old and a Douglas resident for the past 60 years, became a proud U.S. citizen on Friday.

Neto's Tucson: In the studio with the local queen of Tejano radio

Barrio Anita may have lost a priest, a coach and a teacher, but the three inspired others to lead — and there are more to come.

Program is aimed at those in financial need.

The bishop of the Diocese of Salina in Kansas, Edward J. Weisenburger will be installed as Tucson's bishop on Nov. 29.

Bishop Edward Weisenburger will be installed on Nov. 29. He plans to have public Masses "all around the diocese."

Neto's Tucson: Mariachi Cobre holding auditions, and I'm so there

From the Old Pueblo, Federico and Perfecto's story of war, friendship and family love

World War I brought together two Tucsonans 100 years ago.

Monsignor Arsenio Carrillo is greeted by well wishers during the dedication ceremony for Monsignor Carrillo Placita at St. Augustine Cathedral May 31, 2009. The placita, which is open to the public, was built entirely with $1.3 million in donations and with no Rio Nuevo money.

Above all, Monsignor Arsenio Carrillo relished being a priest, humble and devoted. He didn’t seek attention.

Msgr. Arsenio Carrillo in his office at St. Augustine Cathedral in Tucson in 1983. 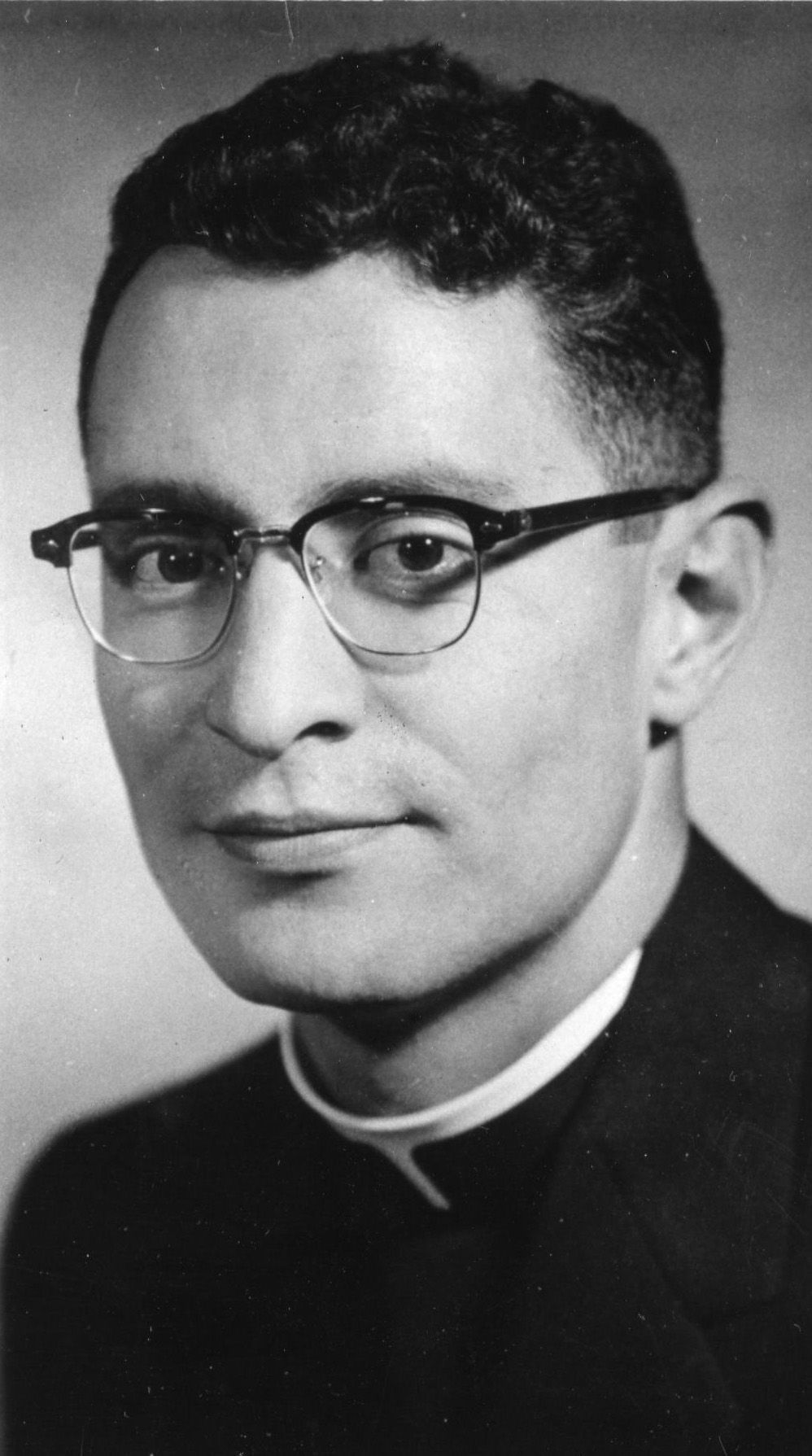 Arsenio Carrillo graduated from a seminary in Ohio in 1956.