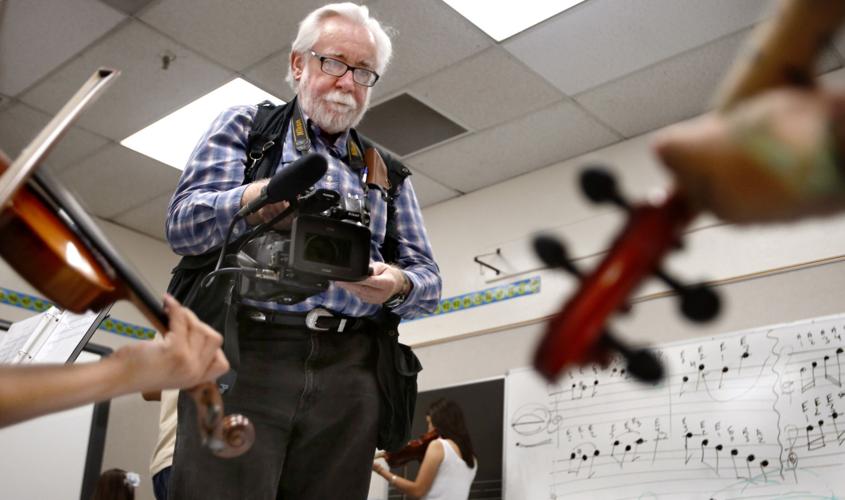 Daniel Buckley, who began delving into and writing about mariachi music more than 30 years ago, shoots some film for his documentary, “The Mariachi Miracle,” during the mariachi summer camp at Davis Bilingual Magnet School.

The halls were buzzing with young musicians and music at Davis Bilingual Magnet School. The mariachi summer camp was full on when Daniel Buckley walked into the classrooms.

Many of the students recognized him instantly, and some greeted “Mr. Buckley” warmly.

Buckley, a tall 62-year-old with a full white beard and white crop of hair, may not be your idea of a superstar. But to many of these budding mariachis — and to many older and accomplished mariachi musicians — Buckley rocks.

However, he doesn’t play the guitar, violin, trumpet, vihuela or guitarrón. He doesn’t sing or dance. Yet to many in Tucson’s wide mariachi and folklorico dance community, Buckley is the champion of mariachi music and culture.

“He’s like family,” said Jaciana Fimbres, a 17-year-old senior at Pueblo Magnet High School and a violinist with Pueblo’s Mariachi Aztlán who was tutoring at Davis last week. “He’s always around.”

For the past three years, Buckley, with his video and still cameras, has recorded hundreds of hours for his documentary film, “The Mariachi Miracle,” which he hopes to debut during next year’s Tucson International Mariachi Conference.

Buckley, who began exploring and writing about mariachi music more than 30 years ago, probably knows more about the music’s history and players than most mariachis. He likely has done more to promote the music, which is embedded in Tucson, than most people have. And if there are some who love mariachi music more than New York-born Buckley, it surely must be a very short line ahead of him.

“We need someone like Dan. If it wasn’t for Dan we would not be here right now,” said violin instructor and longtime mariachi David Gill at the Davis mariachi summer camp.

While the music’s roots are deep in Mexico, mariachi music in this country can trace its lineage to Tucson, the birthplace of the first mariachi youth group, the incubator of mariachi festivals and where mariachi curriculum was introduced into public schools.

The inclusion of mariachi programs in schools has led to lower drop-out rates among students and has propelled many high school graduates into college. Mariachi school programs, led by graduates of Tucson’s youth mariachi groups, can now be found in Las Vegas, San Francisco, Chicago and elsewhere.

But Buckley’s mariachi chronicle is more than the story of youths performing on stage. The history of mariachi in Tucson is the history of desegregation, urban renewal and Chicano social and political changes, said Buckley, a former writer for the defunct Tucson Citizen.

“I have learned more than I could have ever imagined,” said Buckley, who was inducted into the Mariachi Hall of Fame in 2013 and was 2014 Artist of the Year at the Arizona Governor’s Arts Awards.

To complete his project, Buckley needs to raise some serious money, to go along with funding he has already received from the Tucson Pima Arts Council, the Southwestern Foundation, The Chann Foundation, Pima County Board of Supervisors, the Pascua Yaqui Tribe, a 2012 Kickstarter campaign and money out of his own pocket.

Next Saturday, Buckley will be joined by some of his many mariachi and folklorico dance friends for a daylong fundraiser, from 2 p.m. to midnight, at El Casino Ballroom at 427 E. 26th Street.

Buckley plans to present his film at the Fox Tucson Theatre in April during the annual mariachi festival, in conjunction with a two-day national summit on mariachi education in collaboration with The White House Initiative on Educational Excellence for Hispanics, Buckley said.

Linking the music to education is critical, he said. Musical excellence and classroom achievements are inseparable, he added. Many of the mariachi students Buckley has met over the years are now in college or have earned their degrees working as professionals.

What: A fundraiser showcasing Latino musicians and dancers to support the making of the film "The Mariachi Miracle."

Tickets: $10 at the door (A $5 spaghetti dinner, sponsored by the Mariachi Aztlán parents, will be available).

For more information contact Daniel Buckley at 260-4176 or at dbtucson@gmail.com

Ernesto Portillo Jr. selects some his favorite columns from 2015.

A couple of weeks ago, at a party on the edge of Mission San Xavier del Bac, I saw a rock star.

This will be the student ensemble's fourth performance with internationally acclaimed "little orchestra."

The Tucson Museum of Art acquires a painting by Tucson artist, Santos Barbosa, a self-taught painter of western art.

Neto's Tucson: Victor Lopez-Carmen heads to Harvard with hope of returning to help his community

Victor enters Harvard Medical School this year and someday hopes to be a doctor, helping people in his Native American community.

Must see! Last supermoon of the year filmed in the skies over Wales

Daniel Buckley, who began delving into and writing about mariachi music more than 30 years ago, shoots some film for his documentary, “The Mariachi Miracle,” during the mariachi summer camp at Davis Bilingual Magnet School.