NOGALES, Arizona — If you come to Nogales and you don’t go to La Cinderella, it’s like you didn’t come to Nogales at all — that’s the saying anyway, says Adreana Ortega, a manager in the iconic shoe shop’s sister store, across the street from the border with Mexico.

The problem is very few people have come to Nogales since the U.S. closed its borders because of the pandemic to “non-essential” travel, which includes the many Mexican shoppers who used to cross the border daily to spend money at La Cinderella and its sister store Kory’s, a women’s clothing shop.

The U.S. borders with Mexico and Canada are set to reopen Nov. 8, for travelers who are fully vaccinated against COVID-19, after about 20 months of closure to non-essential travel.

The number of people who could cross the U.S.-Mexico border during the closure dropped dramatically, with people who aren’t U.S. residents allowed to cross only for reasons that include work, education and medical treatment.

While downtown Nogales used to bustle with shoppers coming up from Sonora, many residents say since the border closed in March 2020, it’s been a ghost town. Kory’s clientele is usually about 80% Mexican shoppers. Ortega says the store has survived the extended border closure because of clientele in Sierra Vista, Tucson and Phoenix who are familiar with the shop, which has been there for more than 50 years.

But many of the shops on Morley Avenue, part of Nogales’ downtown, have not been so lucky. At least 20 stores closed in the small downtown center because of the pandemic and border closure, says the Nogales Chamber of Commerce.

The majority of shops on the street were closed on a recent Wednesday afternoon. Some look closed for good, with empty rooms or covered windows. Others look as if they had been left in a hurry and could open again at any moment — fully decorated but with dark windows and half-clothed mannequins.

Pre-pandemic, 60% to 70% of sales in all of Santa Cruz County came from Mexican shoppers, who have since been unable to cross, the Nogales Chamber of Commerce says.

The border reopening is huge for Arizona border towns like Nogales and Douglas but also for cities like Tucson and the state as a whole, says J. Felipe Garcia, executive vice president at Visit Tucson, the city’s destination marketing organization.

Every year the Department of Homeland Security counts 20 million to 25 million visits from Mexican nationals crossing the border into Arizona. Close to 80% of those visitors are coming here to shop, spending about $1 billion in Tucson and about $2.5 billion a year across the state, Garcia says.

“So just imagine the challenges we’re facing because those individuals were not able to come across the border and spend money,” he said.

Visit Tucson recently launched a campaign, on social media and with billboards and TV ads in Mexico, to welcome people back. Many Tucson venues are already programming events to attract visitors from Mexico, Garcia says.

For example, when best-selling Latin-American artist Richardo Arjona plays at the Tucson Music Hall on March 27, Garcia expects a couple thousand people will cross the border to see him.

As well, Gov. Doug Ducey and the Arizona Office of Tourism announced last week that 43 businesses and organizations across the state will receive a total of more than $9.4 million in grant funding for festivals, arts and culture and community events, of which more than $4.67 million is going to organizations in Tucson and the southern part of the state.

One factor that could hinder a return to pre-pandemic tourism is that to enter the U.S., visitors need to be vaccinated with one of the COVID vaccines authorized by the World Health Organization. Two common ones used in Mexico, Sputnik V and CanSino, are not authorized.

So, although Mexican officials say that about 90% of adults who live in municipalities along the country’s northern border are fully vaccinated, not all will be able to cross.

Many of the remaining merchants in Nogales’ downtown are gearing up for a lot of shoppers, especially as the holiday season approaches.

The Arizona city has no property tax and so relies on sales taxes. Before COVID, residents of Sonora supplied 60% to 65% of the city’s sales tax collections, Garino says.

“Those people that come across, they come as tourists, they come as shoppers,” he said. “They fill up their cars with gasoline and they stay in our hotels, use our restaurants and shop. That increases our sales tax, which is key for any municipality, especially along the border.”

Every time Kory’s — the dress shop across the street from the closed port of entry — had to shut its doors because of the lockdown, a COVID case in the store or just not enough customers, Ortega felt more disheartened. With two kids and a new house she had just rented, she worried about whether she would make it through the loss of income.

But the last time the store reopened, Ortega came back to work full time, though fewer people were needed to work the store.

Ortega loves her job and says everyone she works with is excited and anxious to see what business looks like once the border reopens.

Throughout Nogales, the businesses that have weathered the closures and loss of Mexican shoppers are all excited. Faces light up when people are asked about the border reopening, like that of Ivan Ortiz, who owns Baby Market Boutique, about a mile-and-a-half from the border.

With about half of his clientele in Nogales, Sonora, Ortiz had to pivot for his business to survive. He began selling his products online and crosses the border himself to bring purchases to established clients.

“For some other business owners, the damage is done,” he said. “They couldn’t do anything to survive.”

Many of the stores that stayed open on Morley are larger, more established stores. About half the shops in the plaza with Baby Market are empty. The dress shop next door has a sign on the door that says it’s taking customers by appointment only.

Ortiz opened his children’s clothing store that he runs with a little help from his mother about a year before COVID hit. Without having built a clientele over that year, he wouldn’t have made it through the border closure, he says.

Another effect of the border being closed is that it separated families who live on opposite sides of the border.

This was the case for Ortiz’s grandmother, who lives in Sonora and missed a grandson’s wedding because she couldn’t cross into the U.S. since she is not a resident. Ortiz says his abuelita is very excited for the border to reopen.

The border reopening is good news for many families on both sides, said Tucson’s Consul of Mexico Rafael Barceló Durazo. The closure has separated many families since family visits were not considered essential, he said.

In some cases, the family member living in Mexico had a visa to visit the U.S., but the person living in the U.S. may not be able to visit Mexico, either for health or immigration reasons.

Therefore, in addition to the people whose jobs or businesses depend on the commerce and tourism of Mexican people, many binational families are joyous at the news that the border will reopen, Barceló said.

Lots of people in Nogales have parents or a spouse who live in Mexico and couldn’t come across to visit once the border was closed, said Garino, Nogales’ mayor.

It’s meaningful that the border is reopening in time for the holidays, for more than economic reasons.

“If everything goes good, all of us will be together this Christmas,” Garino says, “because we haven’t had that opportunity.”

Pima County employees who work with vulnerable populations are required to get vaccinated by Jan. 1 or face termination.

Experts: High count of border crossers misleads; thousands were tallied more than once

While the number of migrant crossings of the U.S.-Mexico border in fiscal 2021 was high, it likely did not set a new record — due to a high percentage of people crossing more than once and fewer people crossing undetected.

She awaits judge’s ruling on whether she was within her rights to remain at a border wall construction site, on land sacred to Indigenous people, after federal law enforcement asked her to leave.

As the U.S.-Mexico border reopens to nonessential travel, Mexican tourists come across to shop and visit family, though the hordes of shoppers that many anticipated have yet to materialize.

A judge ruled that Amber Ortega can't use a federal law protecting religious freedom as her defense for not leaving a border-wall construction site near a spring that is sacred to the O’odham.

COVID is No. 1 on-the-job killer of CBP officers, despite imminent vaccine mandate

​​COVID-19 is the top killer of agents with Customs and Border Protection, whose deaths from the virus are considered in the line of duty, even as Border Patrol union leaders advocate against a vaccine mandate that takes effect Nov. 22.

Customs and Border Protection's Air and Marine Operations works with Border Patrol to apprehend migrants at the U.S.-Mexico border on Nov. 10,… 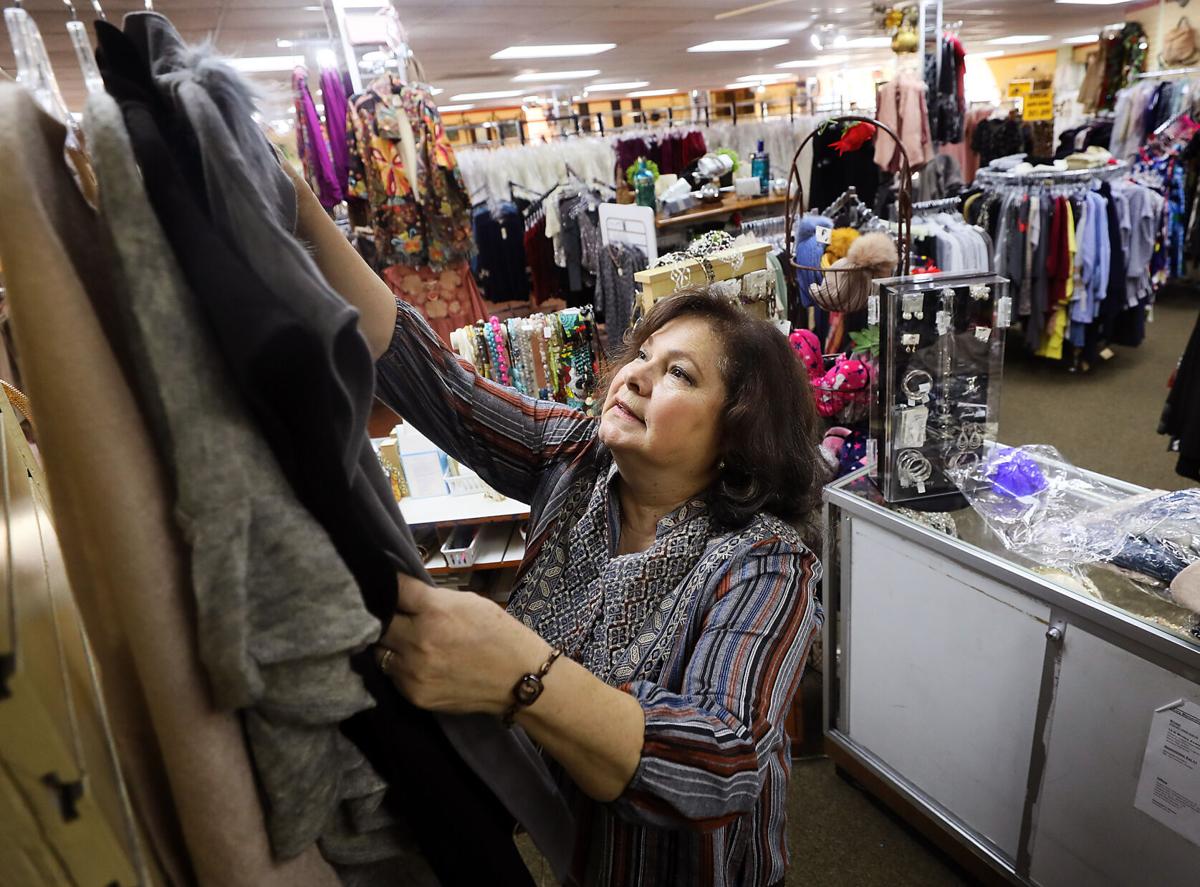 Sandra Kory, owner of Kory’s, a bridal shop on Morley Avenue in Nogales, Arizona, unpacks new merchandise. When the U.S.-Mexico border closed, many businesses lost shoppers crossing over from Mexico. 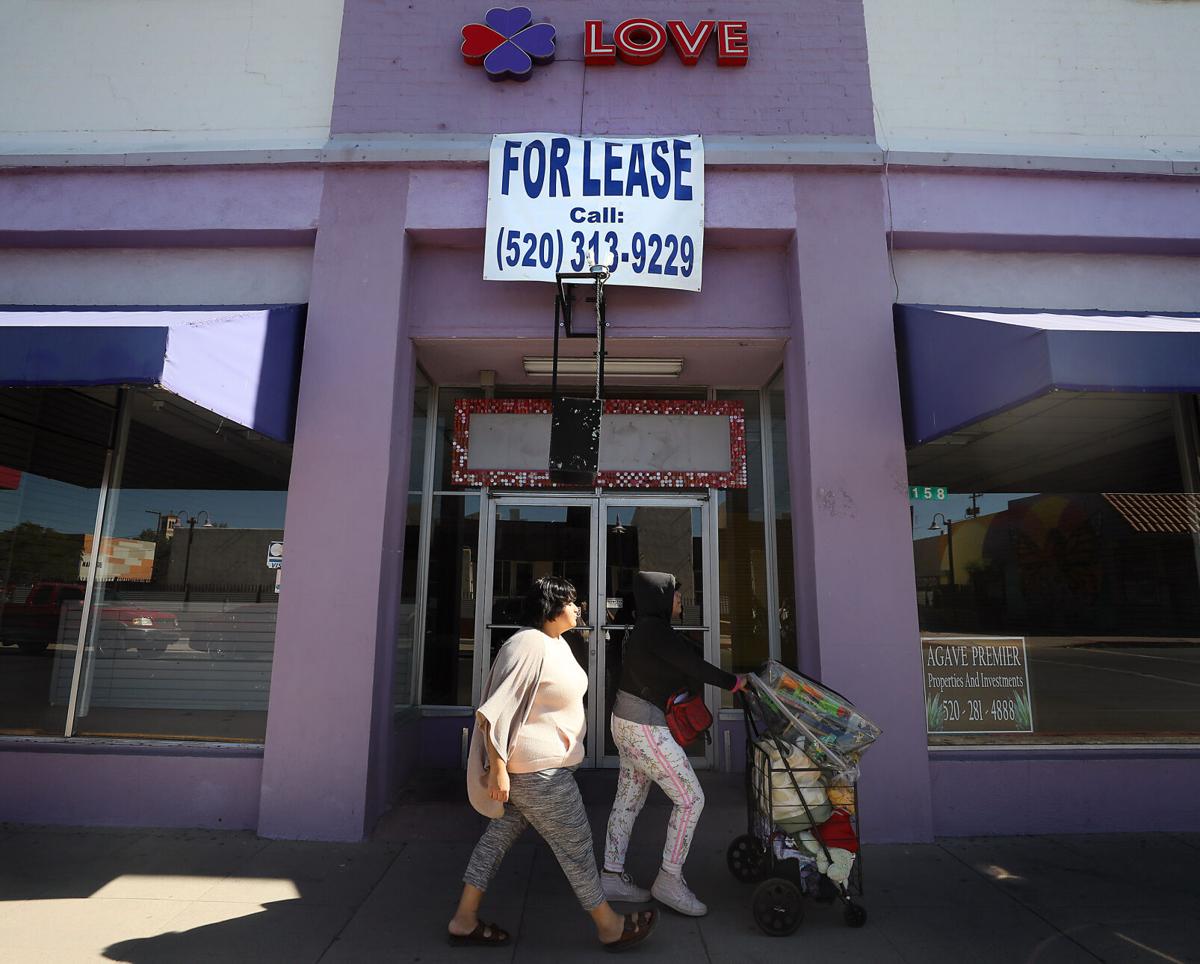 Two women walk in front of an empty storefront along Morley Avenue in Nogales, Arizona, where many clothing and shoe stores are located. At least 20 stores closed in the small downtown center because of the pandemic, says the Nogales Chamber of Commerce. 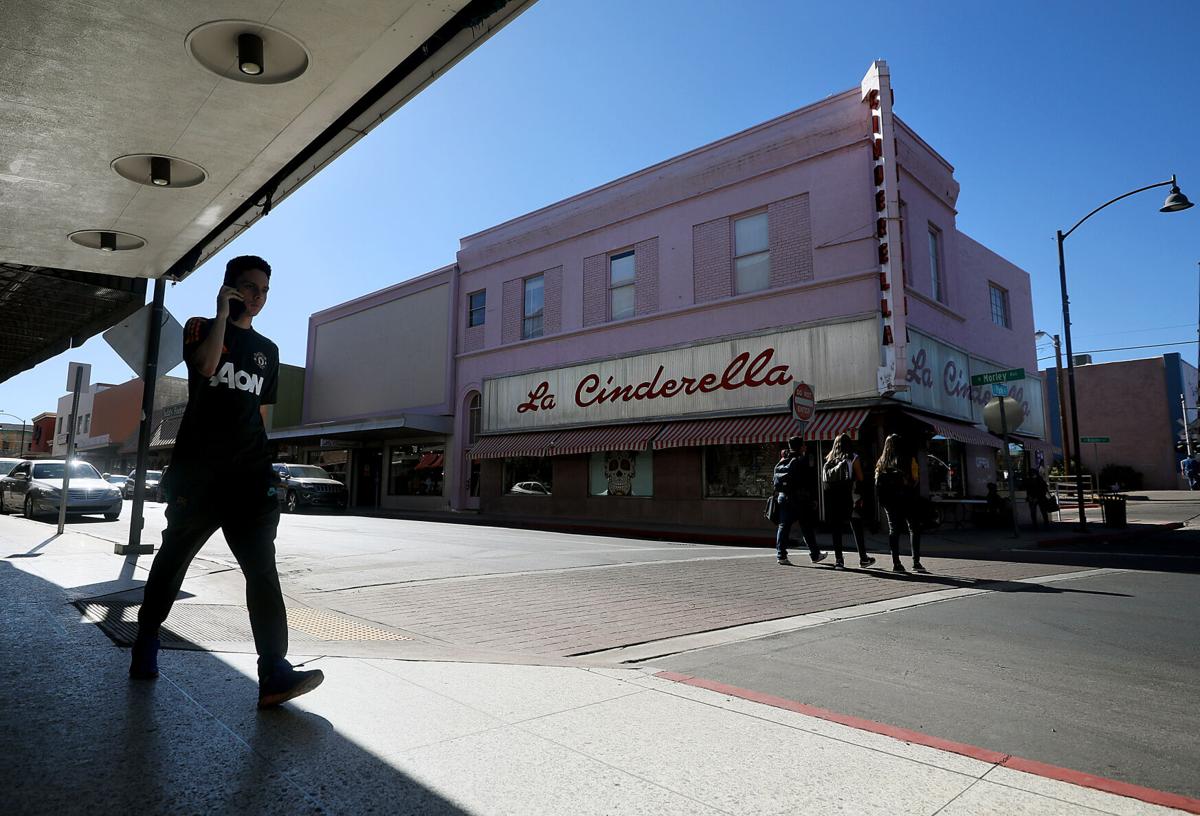 Only a few pedestrians and cars are seen near the once-popular shops along Morley Avenue in Nogales, Arizona, near the border with Mexico. 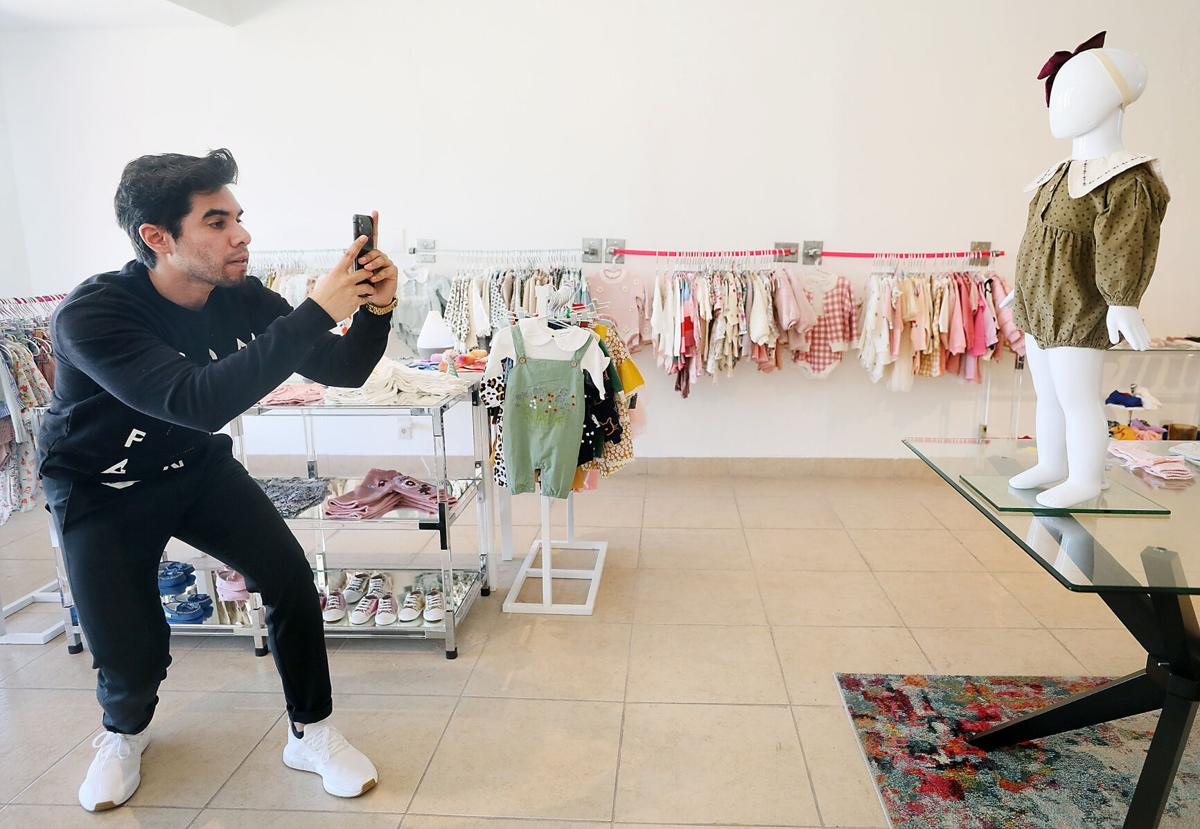 Ivan Ortiz, owner of Baby Market Boutique, 840 N. Grand Ave. in Nogales, Arizona, takes a photo of an outfit to post on social media. Ortiz opened his store about a year before the coronavirus pandemic began. 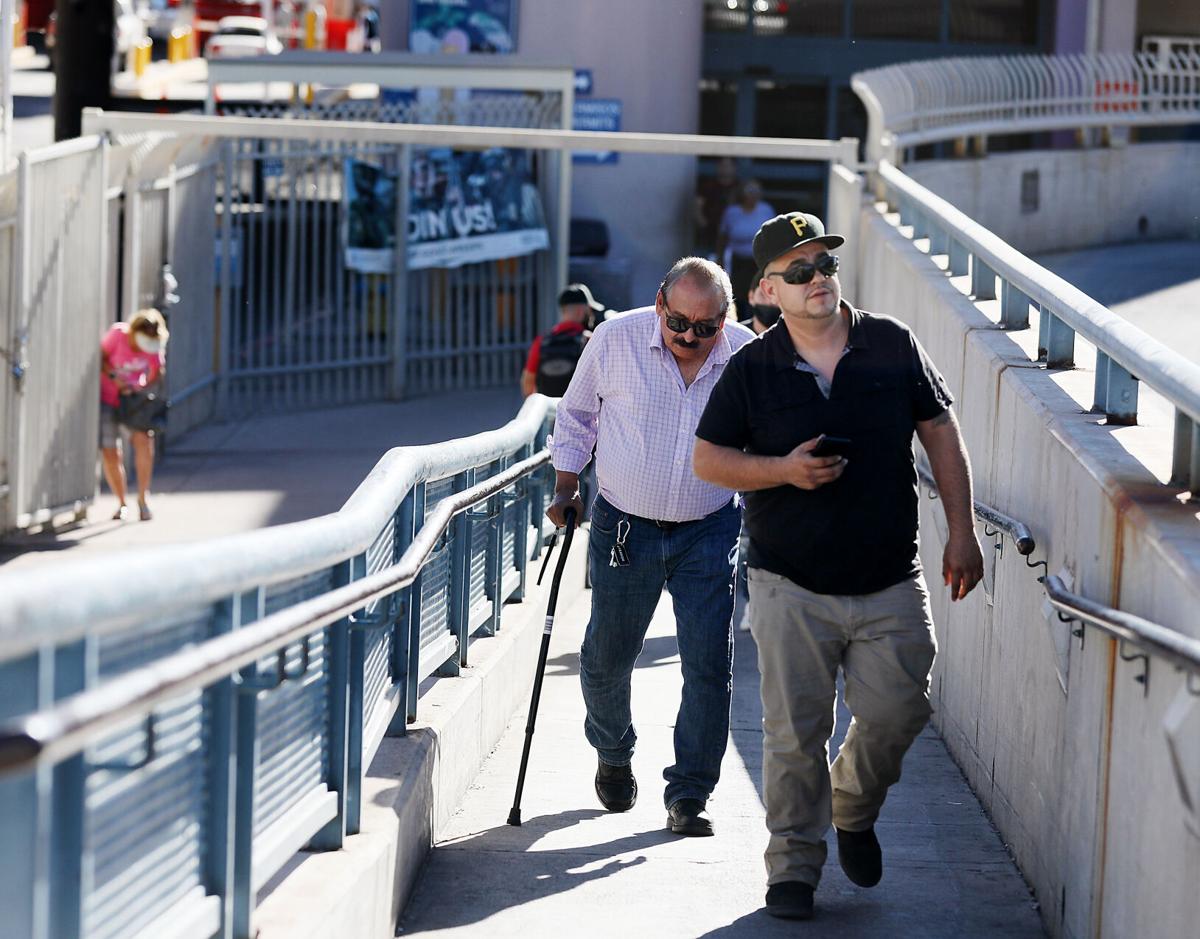 People walk up a ramp after crossing the border from Mexico into the United States at the Dennis DeConcini Port of Entry in Nogales.