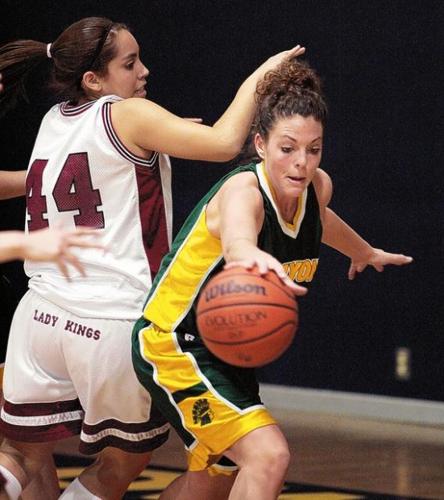 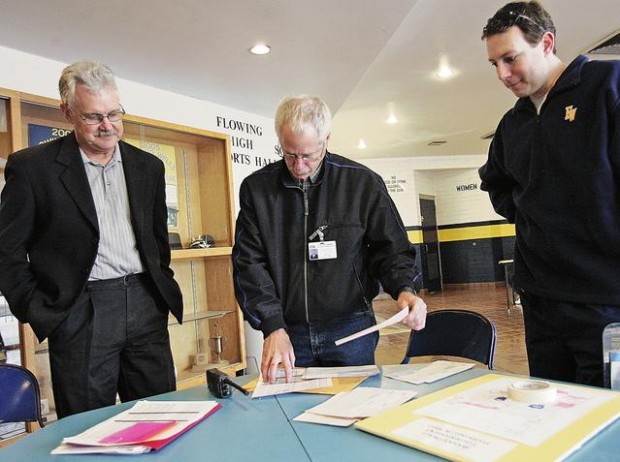 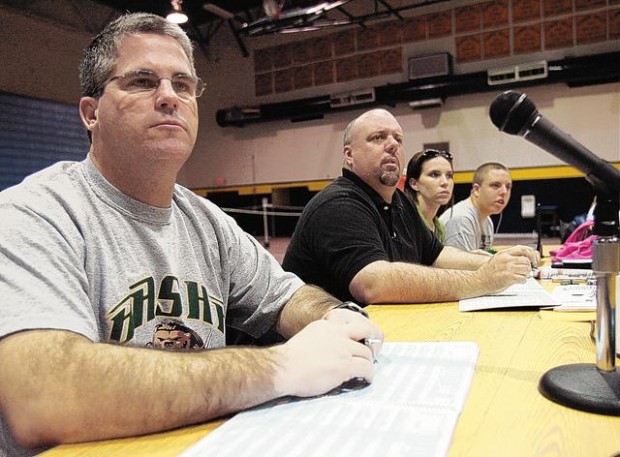 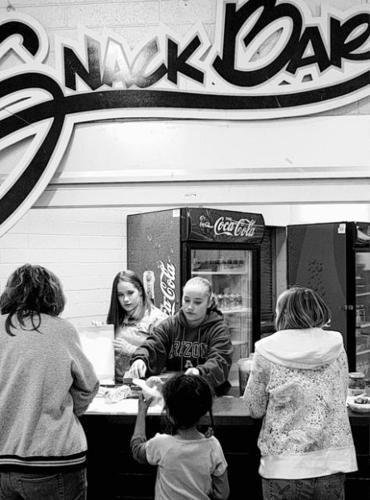 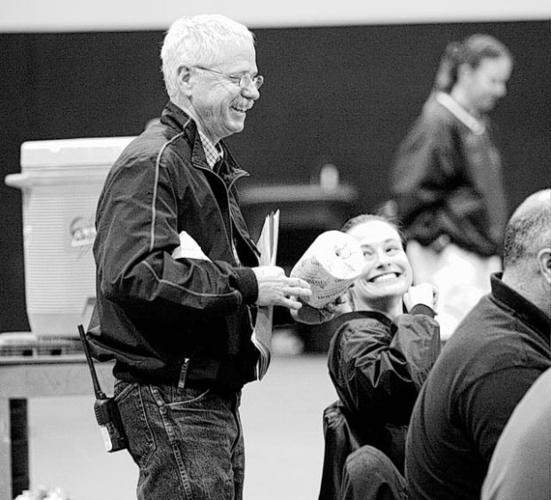 With 16 sets of teenage girls playing a total of 32 basketball games in two gyms, the potential for something to go wrong is high.

The school recently finished hosting the Flowing Wells Holiday Shootout, a tournament it has held for 17 years during a three-day span between Christmas and New Year's Day.

To most people who attended the event, the only things that mattered were the game scores, including Ganado's 67-52 victory over Phoenix Desert Vista in the championship game Dec. 29.

That no one noticed anything else other than the action on the court was a testament to how well-run the tournament has become over the years.

"It's always been a pretty nice holiday tournament," said Flowing Wells athletic director Pat Weber, who also served as the tournament director. "We get a lot of good people to help us out."

Here is a look at some of the people who were involved in the Flowing Wells Holiday Shootout.

He's in charge of it all

Weber, 50, in his third year as athletic director, has been with the Flowing Wells district 21 years. He previously was the wrestling coach before taking over the athletic department in the fall of 2004.

As the person who oversees everything associated with the tournament, Weber is in constant motion from before the first game is played — he arrived at 6 a.m. on Dec. 27, 2 1/2 hours before the opening tip-off — until the championship and runner-up trophies are awarded at the tournament's completion.

"It's always a challenge, but we manage to get it done," said Weber, who also will oversee the school's 35-team wrestling tournament Jan. 12 and 13.

If Weber is not scooping ice into Gatorade jugs or posting signs to indicate which schools will use which locker rooms, he is listening to or talking into a walkie-talkie, often while tooling around in a golf cart that makes the 200-yard trek between the East Gym and West Gym much easier to navigate.

Though he deemed the event a success, it wasn't without a few hiccups. The most notable: the school district's decision to start repaving some of the parking lots during the first — and busiest — day of the tournament.

Weber said the tournament runs so smoothly because of all the help he gets from various paid and unpaid support staff.

Flowing Wells High School's close-knit atmosphere really shows itself in the form of some of the people who make themselves available to work the tournament each year.

Among those is Sherrie Gaona, a 1986 Flowing Wells grad who works in the cafeteria at the district's Homer Davis Elementary School. This is her third year selling tickets at the tournament, and on the first day of competition she was stationed at the entrance to the East Gym.

"I've always been part of this school, I just wanted to be a part of it," Gaona said of the tournament. "I know my spot, I know where to go."

Weber said the tournament was expected to draw about 1,500 people over three days, generating between $2,000 and $3,000 in revenue after expenses. That money goes into the school's general fund for athletics.

The portable table that separates the team benches is a veritable who's who of Flowing Wells alums. The clock and scoreboard operator is 2003 grad Jessica Whatton, while the official score book is handled for the 17th straight year by Jeff Watson.

Watson, also a Flowing Wells grad who until this past year had served as the high school's equipment manager, said he had been looking forward to coming back during the winter break to help out with the tournament.

"When school is out I don't have a lot of business," said Watson, a sales representative for a local sports equipment supplier.

Watson is in charge of assigning who works the clock, scoreboard and score book in both gyms for every game. He says there are plenty of people, mostly former students, from whom he can choose.

"We'll bring in a new person every so often, and we just put them with someone who knows what they're doing," he said.

Any self-respecting tournament must have a fully stocked snack bar to satisfy the cravings of students, parents, relatives and other fans.

At Flowing Wells, students run the booth in the West Gym (the East Gym's snack bar, operational for regular season games, was not open for the tournament because games were only played in there on the first day).

Among the students helping out this year was 18-year-old Heidi Siefers, a senior who until this year played basketball at the school.

Heidi didn't try out for basketball this year because she wanted more time for schoolwork and her church, but she still likes to work the snack bar so she can watch twin sister Hope, who is on Flowing Wells' varsity team, play.

"Everything was already here when I got here, so it's easy to set up," said Heidi, whose first shift on the tourney's first day was to end in time for her to get a front-row seat for Hope's 1 p.m. game.

One or two students work the snack bar at a time, depending on how busy it gets. The peak times are around lunch and dinner time, Heidi said.

"We've run it so much in the past, it's so well-organized," Heidi said."

Unlike the revenue from gate receipts, all profit from the snack bar during the tournament goes right back into the girls basketball program to help pay for uniforms, equipment and travel. Weber figured the snack bar would clear about $1,000 over the three days.

The folks in stripes

With more than two dozen games played over three days, a key to things running smoothly is having a good crop of referees to officiate.

Enter Steve Ganson, the Arizona Interscholastic Association's commissioner of officials for Southern Arizona. He is in charge of assigning refs to all freshman, junior varsity and varsity games in all sports between Tucson, Benson and Nogales. That also includes eight basketball tournaments during the winter.

"We have a strong relationship with Flowing Wells," said Ganson, who himself officiated a pair of games on the tournament's first day.

Because the tournament was used as a testing ground for an experimental three-person officiating crew, each referee earned $33 per game rather than the normal $50-per-person, per-game fee for two-person crews. Flowing Wells pays for the officials out of money it receives from gate admission.

Each three-member crew worked back-to-back games in the same gym during the first day of the tournament.

A slice of hospitality

Tucked into the northwest corner of the West Gym in a room normally used to store extra equipment is the heart and soul of any good tournament: the hospitality room.

At Flowing Wells, this room is also where parents of the basketball players get to contribute to the tournament's success by providing a homemade spread of food for coaches, referees and tourney support staff.

"We're very proud of our hospitality room," said Kathy Hupp, whose daughter Abyee Maracigan is a junior on the varsity team. "Once you come to work it once, you're a gym rat. If I have parents do it one year they're signed on and do it for years."

Hupp, who has volunteered to work the hospitality room each of the last five years, teams with other parents to put the potluck selection together.

A sampling of the vittles available for lunch during the first day of the tournament: fried chicken, macaroni salad, pizza, barbecued meatballs, cookies and flavored fudge.

"This afternoon they're getting honey-baked ham, but don't tell anyone, or they'll be lined up at the door," Hupp said.

As the clock crept toward noon on the first day, several tournament personnel could be heard wondering when the hospitality room would be open for business.

"I'm waiting for the fried chicken and the pizza to come," said Matt Swan, 16, a junior at Flowing Wells who is a manager for the girls basketball team.

Just then the pizza arrived and Swan quickly sprinted over to the hospitality room to be first in line for a slice.

Since Weber and his supporters handled every facet of the tournament, Flowing Wells girls basketball coach Michael Perkins needed only to concentrate on one thing: repeating as tournament champs.

"I couldn't do this by myself," said Perkins, who is in his second year as head coach. "A lot of good people help out from the top down to make this work, and Pat Weber does a ton of work."

The Caballeros were unable to defend their tourney title, however, falling to Desert Vista in the semifinals before beating Chandler Basha 60-54 for third place.