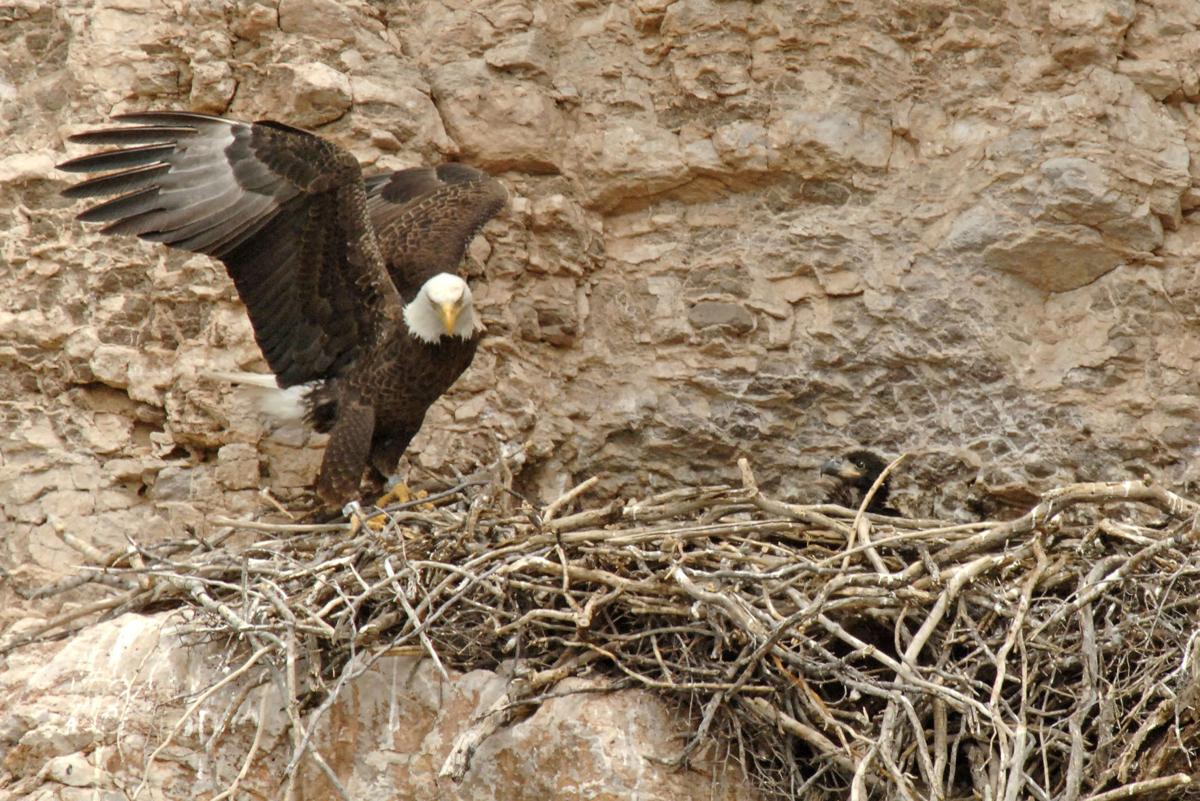 A bald eagle with a nestling.

Arizona’s population of once-endangered bald eagles has flourished in the past year — with a record number of young hatched during the 2017 breeding season, state wildlife officials reported.

Eighty-two were hatched this year, topping the previous high of 79 in 2016.

Since 1978, when only 11 pairs of bald eagles were counted in the state, their numbers have grown to an estimated 67 breeding pairs today.

“An increase in breeding areas and increasing numbers of hatchlings is a testament to the resiliency of these magnificent animals and our ongoing efforts to help recover bald eagles in Arizona,” Jacobson said.

An increase in the bald-eagle population in Arizona and elsewhere is welcome news after decades in which the species’ survival was in doubt.

“Forty years ago, our national symbol was in danger of extinction throughout most of its range,” according to the U.S. Fish and Wildlife Service. “Habitat destruction and degradation, illegal shooting, and the contamination of its food source — largely as a consequence of DDT — decimated the eagle population.”

DDT was a powerful insecticide that was found to cause serious problems in wildlife.

The dire situation led to federal listing of the bald eagle as an endangered species in 1978.

“Habitat protection afforded by the Endangered Species Act, the federal government’s banning of DDT, and conservation actions taken by the American public have helped bald eagles make a remarkable recovery,” the Fish and Wildlife Service noted.

The species was removed from the endangered species list in 2007.

In Arizona, most bald eagles nest in trees and on cliffs within a mile of water.

“They’re usually found along waterways with fish and waterfowl — their main prey,” Jacobson said. “They’re spread across the state primarily along Central Arizona waterways such as the Salt River and Verde River.”

Bald eagles aren’t usually seen in the Tucson area, but sightings could eventually be possible.

“In recent years, there has been an expansion of the population to new locations,” Jacobson said. “We even have five pairs in the metro Phoenix area. That’s probably because Phoenix has artificial waterways stocked with fish. Tempe Town Lake is stocked with fish.”

Tucson also has some lakes stocked with fish that could eventually attract some of the birds.

Jacobson noted that Arizona is home to 274 breeding pairs of golden eagles. “They are not tied to water” as bald eagles are, he said. “They are distributed across Arizona.”

Conservation efforts are underway by the Southwestern Bald Eagle Management Committee. The committee is a coalition including the Game and Fish Department, 25 other government agencies, private organizations and Native American tribes.

Bald eagles are not actually bald. They have feathers covering their heads. The name comes from the old English word “balde” which originally meant white.

Arches and windows in rocks can be found near the Catalina Highway.

Tucson's Sweetwater Wetlands look a bit like a bayou this summer

Check out the verdant late-summer beauty at Sweetwater Wetlands.

The fire burned 48,000 acres on the mountain over the summer.

Don't miss this: Autumn is showing its colors in Tucson's Catalina Mountains

Here are some places for an up-close look at autumn color.

Some remnants of brilliant autumn color remain in the Catalina Mountains.

A bald eagle with a nestling.