Coronavirus cases are nearly everywhere in Pima County, which has recently set another record for the number of cases in a week.

Since the start of the current spike to the second week in November, at least one person was diagnosed with the virus in 99% of the county’s census tracts, which are areas similar in size to neighborhoods.

The Arizona Daily Star mapped and analyzed the locations of COVID-19 cases in Pima County, which were provided by the county, to learn where the virus has spread the most when cases spike.

Cases have spiked three times in Pima County. The latest surge is ongoing and hasn’t peaked. But cases here have peaked twice before, once over the summer and once in September after University of Arizona students returned to Tucson for the fall semester.

The Star mapped six weeks of cases before each spike reached its highest point. For the ongoing spike, the Star mapped a recent six-week period from Oct. 4 through Nov. 14, which included the latest complete week of data available from the county.

While a few hot spots stick out on maps of the most recent spike, these hot spots are not driving the record-breaking numbers in Pima County. Instead, widespread increases nearly everywhere are driving the numbers.

Since the start of the latest spike to the second week in November, cases have increased in nearly 90% of census tracts countywide. More tracts will likely see an increase as more data is reported.

And nearly half of all census tracts in Pima County have set or matched record weekly case counts during this latest spike.

When cases spiked at the University of Arizona, for example, that surge lasted only about three weeks, from Aug. 30 to Sept. 19.

During the ongoing spike, the census tract with the most cases per 1,000 people in Pima County included a federal prison on South Wilmot Road that had a recent outbreak.

Officials ultimately contained the UA spike to a much smaller number than when cases spiked over the summer. But Pima County has already blown past summer levels in recent weeks.

The county shut down places such as pools, spas and gyms at apartment buildings in a specific geographic area near the university.

And the county partnered with the university to issue a shelter-in-place recommendation for students living in that area.

“I think that was what contained that surge and actually limited it from spreading through the community,” said Bonnie LaFleur, a biostatistician at the University of Arizona.

The ongoing spike is so widespread, however, that these same tactics won’t work, Garcia said.

“That’s way harder to do on this kind of level,” he said. “You just can’t do that for the entire county. ... We’re talking about a landmass the size of the state of New Hampshire. How do you possibly enforce stuff like that?”

Not only that, but Gov. Doug Ducey has limited the county’s options to combat COVID-19, he said.

“We really are limited by the governor’s executive order, except with regards to our mandatory mask mandate. We really cannot do things that are more stringent than what the governor has set forth,” Garcia said.

Ducey said last week that he has no plans to issue restrictions beyond existing ones that include limits on occupancy at bars, restaurants, movie theaters and gyms. Meanwhile, the widespread nature of this spike has required Pima County to combat the virus in new ways.

“That’s actually part of the reason why our approaches have to be much more population-based,” Garcia said, adding that this is why the county has issued a voluntary nightly curfew, canceled sports tournaments and “quadrupled down” on testing.

“You’re seeing us pull out all the stops on all those strategies because that’s really the only thing that we can do,” he said.

“Those are all very kind of imprecise interventions that we have. But by the same token, they are the only tools that we now have in order to deal with the situation that is at hand.”

Arizona's hospital beds available for a potential surge in COVID-19 patients are at their lowest number since July, and analysts predict they could run out soon.

The Democratic mayors, including Tucson's leader, concede that their police departments are not enforcing their own local orders.

Arizona Gov. Doug Ducey laid out a schedule Tuesday for business leaders on when he expects COVID-19 vaccines to be available to "prioritized groups," and then to the general public.

Hospitals are taking in patients from overwhelmed facilities out-of-state, and are finding it hard to recruit the staff they need as COVID-19 cases rise across Pima County.

Arizona is expected to receive "hundreds of thousands" of COVID-19 vaccine doses by the end of this month. Gov. Doug Ducey refused hospitals' pleas to put new mitigation measures or restrictions in place in meantime.

Cases surged after Christmas, setting a new statewide record. How much worse will the next two months get, health experts are wondering. 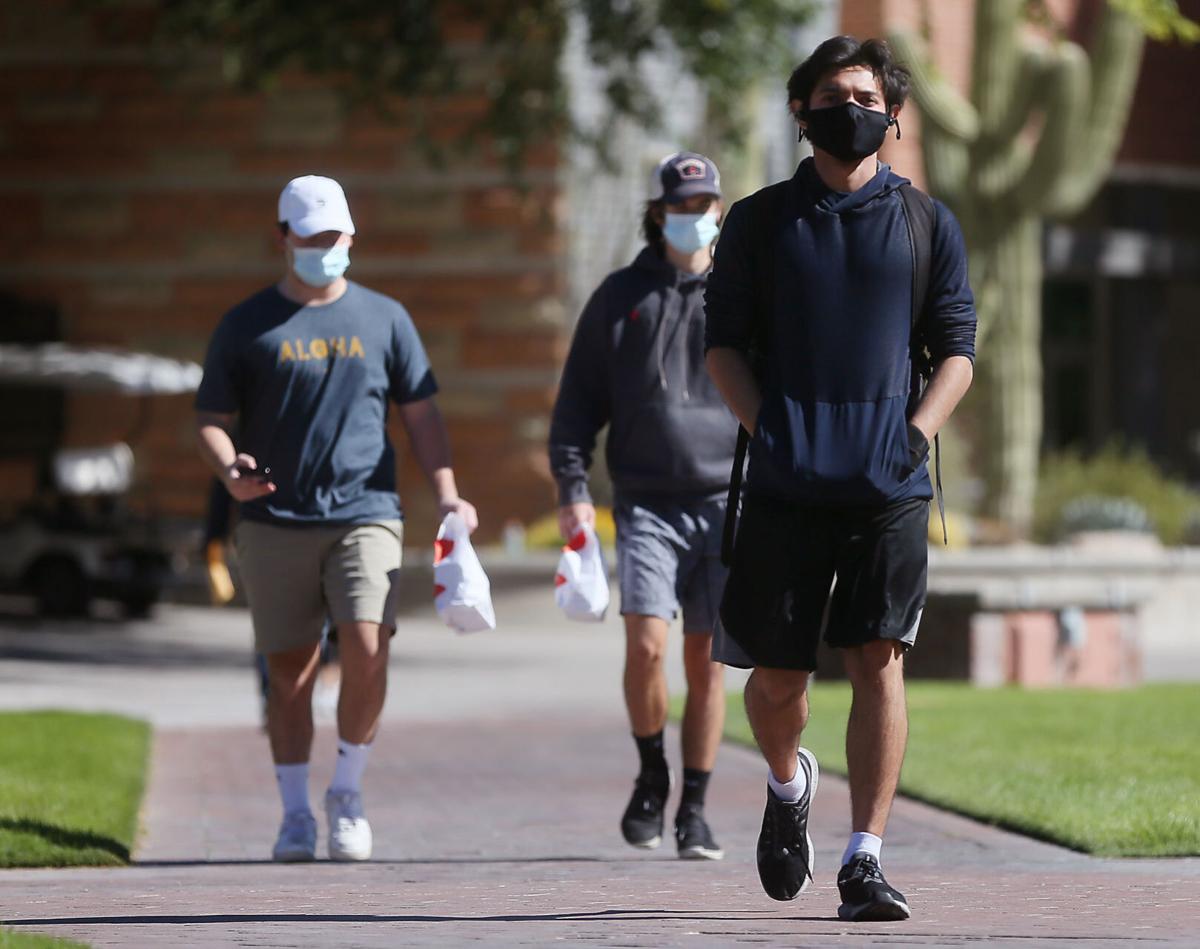 When coronavirus cases spiked at the University of Arizona, students had returned to Tucson for the fall semester. That surge lasted only about three weeks, from Aug. 30 to Sept. 19. 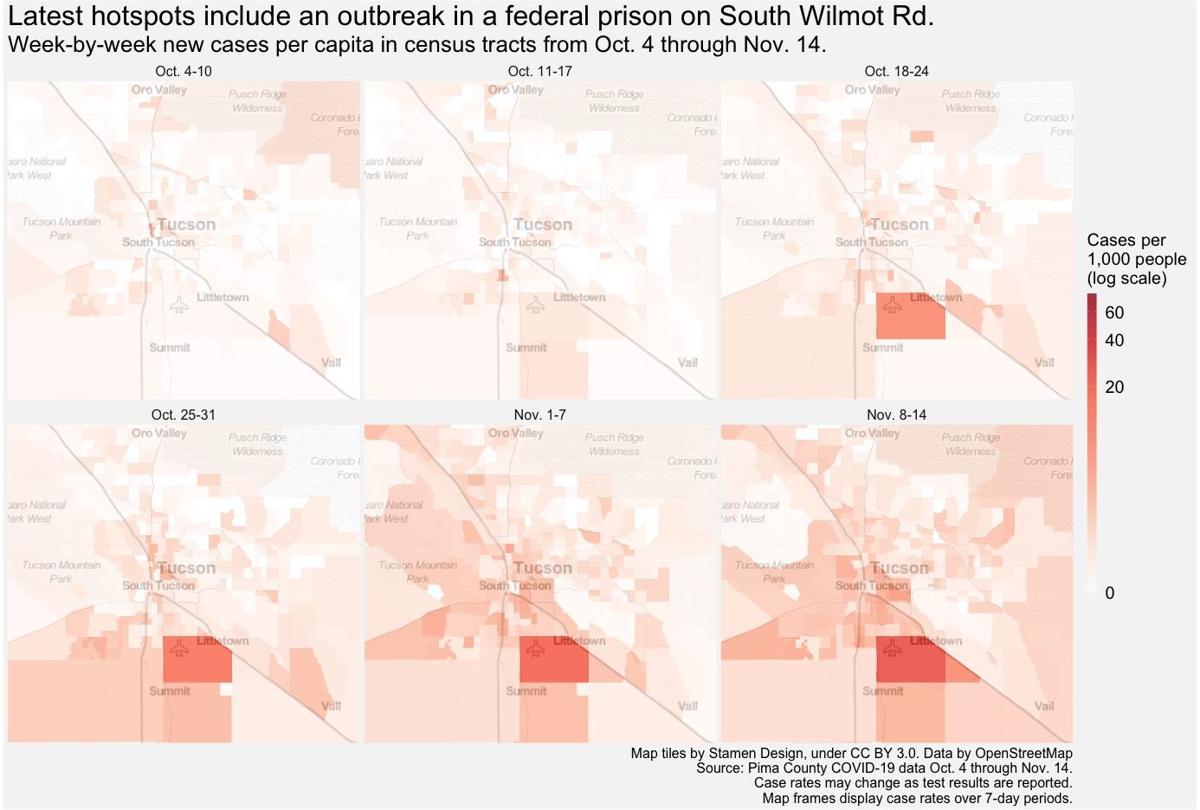 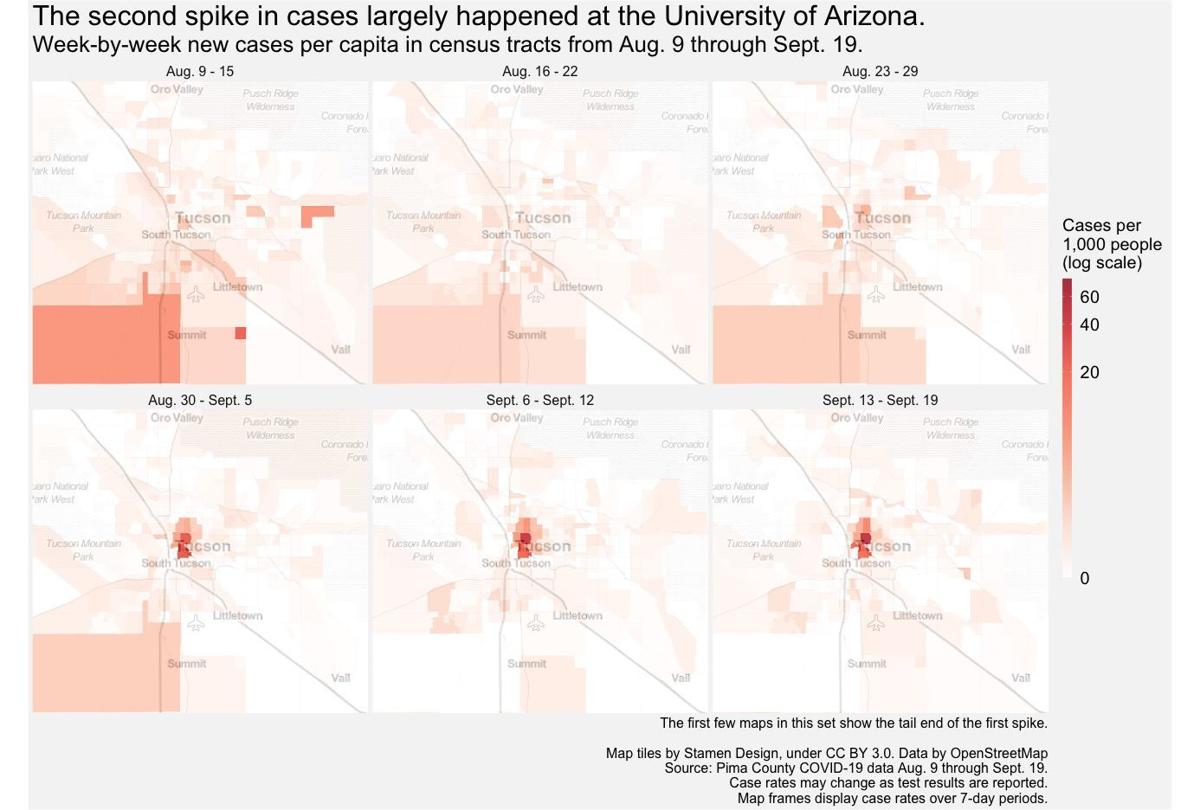 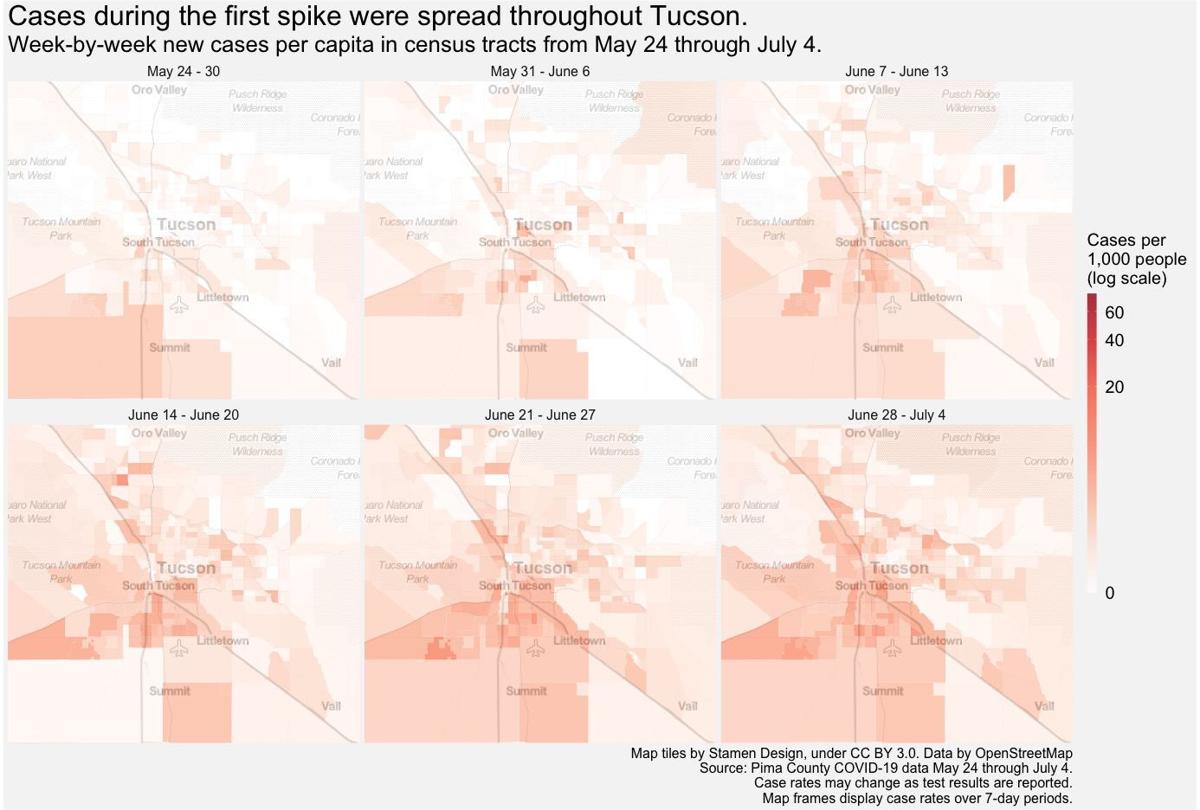 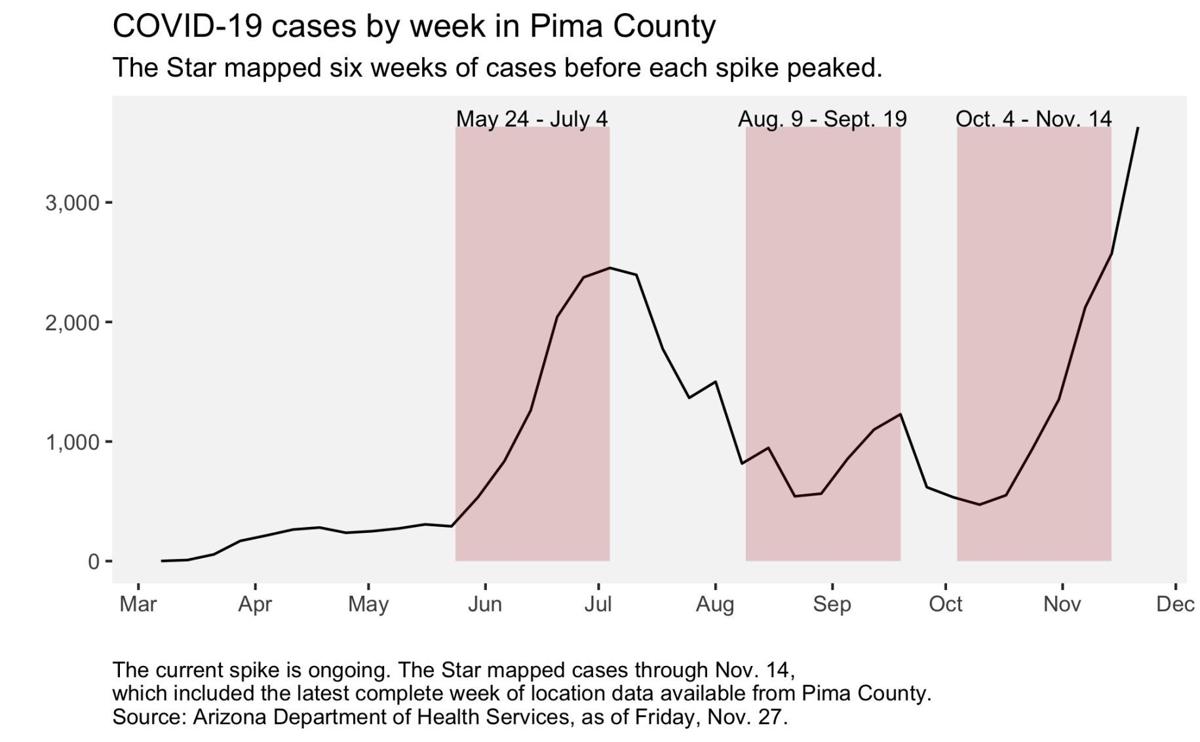 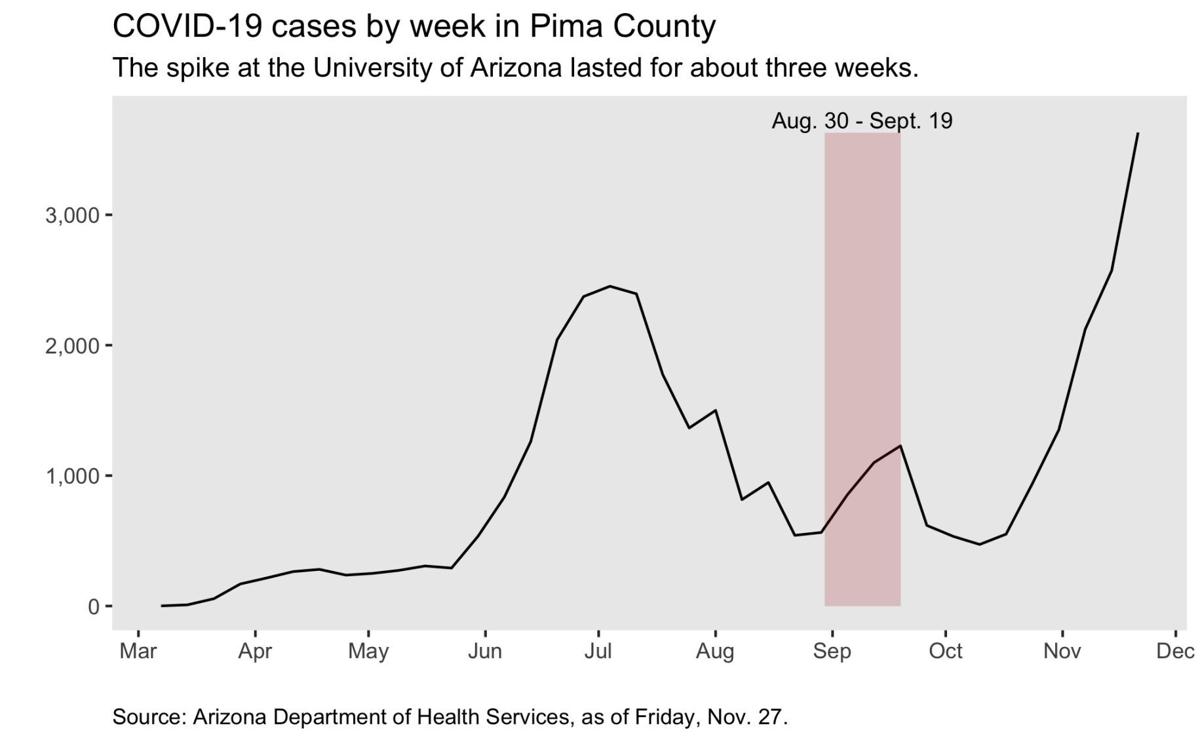