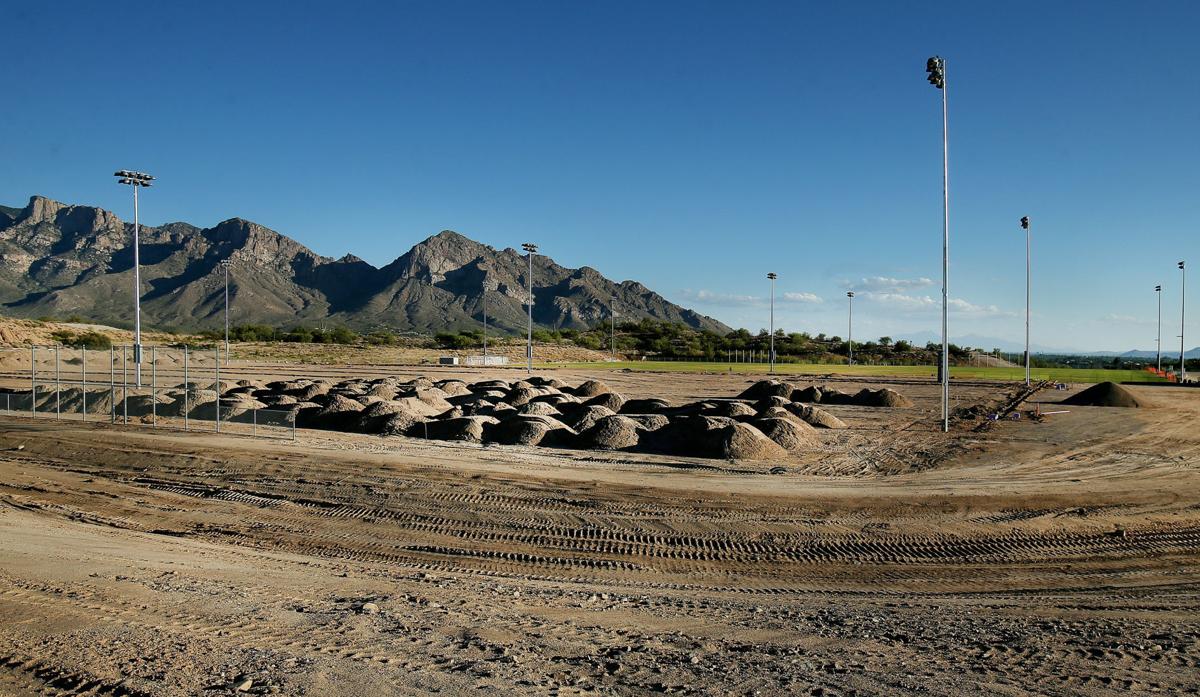 Voters in Oro Valley will decide on a $17 million general obligation bond package to pay for improvements to Naranja Park. 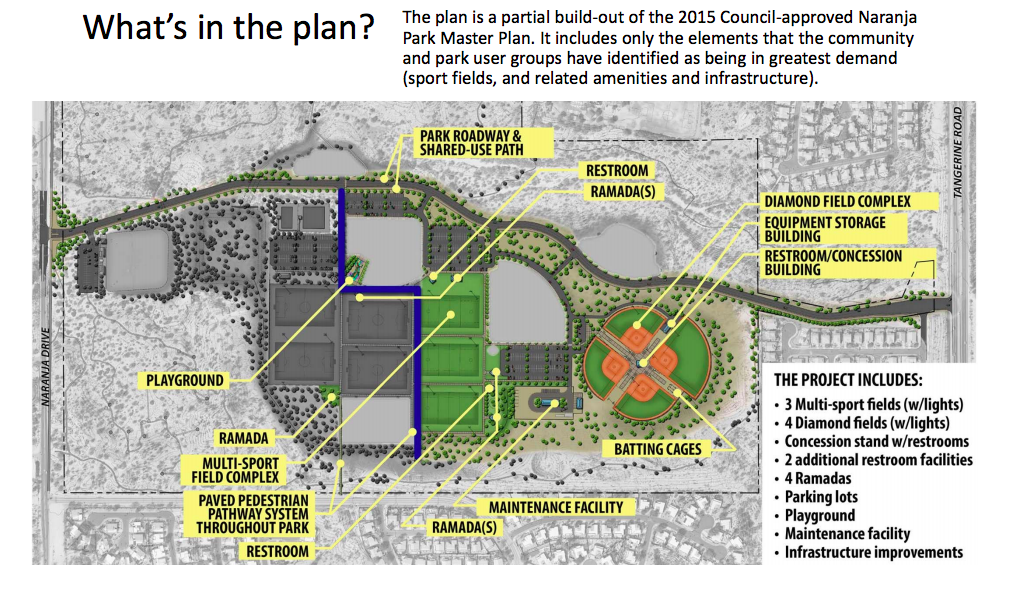 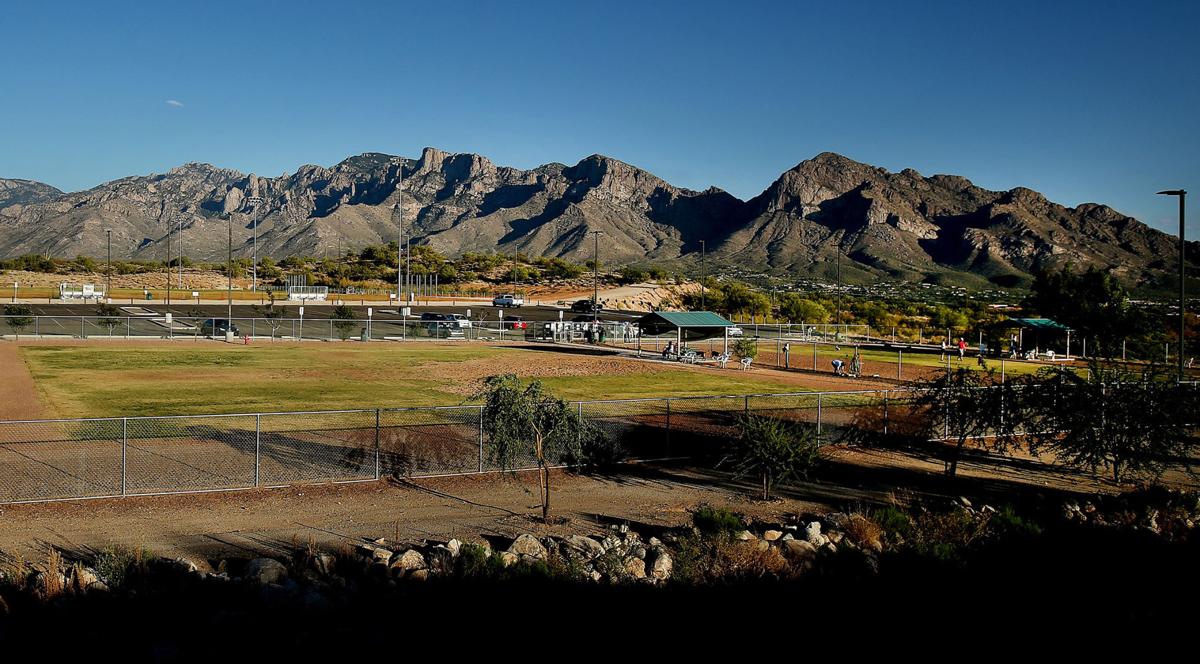 A view of the dog park with Pusch Ridge in the background at Naranja Park. Nearly 72 percent of voters rejected the proposed bond package.

Voters in Oro Valley will decide whether to break from the town’s history of paying for parks incrementally when they decide Nov. 7 whether or not to support a $17 million bond proposition to build new fields and other amenities at Naranja Park.

Proposition 454 was born out of a February 2017 Town Council meeting with parents, athletes and Oro Valley groups who asked the town to build more playing fields at the park.

Brian Mitchell, an Oro Valley Little League coach, said the shortage of playing fields is so bad that many Oro Valley sports teams have never actually played games in the town.

The council directed its staff to develop a park bond proposal, and in April it voted to put Prop. 454 on the November ballot.

If approved, the general obligation bonds would pay for three multi-sport fields with lights; four baseball diamonds with lights; a concession stand, restrooms, four ramadas, playground, a maintenance facility and other infrastructure projects. This would provide for a partial buildout of the park’s master plan.

If voters back the bond project, a homeowner with a property worth $250,000 would pay $54 in additional property taxes a year, the town estimates. The debt service for the bonds would be about $1.4 million per year for 20 years.

Critics of Prop. 454 argue the $17 million bond proposal will actually cost taxpayers a total of $28 million over 20 years, with only about $8 million going to new playing fields.

Supporters of the bond package argue the $28 million figure is being used to scare away support for the project.

If approved, the project costs, according to the town, for the park would be:

Jack Stinnett, an Oro Valley resident who chaired the town’s parks board several years ago, said the proposal is filled with unnecessary amenities that serve outside interests rather than local users.

Stinnett helped to establish the group Axe the Tax, which is opposed to the bond package.

He also says he supports the building of new fields in Naranja Park but doesn’t want the town becoming a taxing authority. “In the 2015 Pima County bond (package), the town requested $9 million for Naranja Park improvements and I supported that bond request,” he said. That bond package was defeated by voters.

Many critics of the proposal believe Prop. 454 is just the first step of a long-term plan to spend a total $33 million on the park, with eventual plans to build an events center.

The city staff confirmed that a 2015 general plan for the park does include plans for an events center in Naranja Park, but that is not part of Prop. 454. The town has not identified any source of funding to build the center.

In public meetings, some area residents were quick to tie larger-than-expected financial losses at the town’s new golf course as the real culprit to why the town hasn’t built new playing fields.

For the last two years, the town has lost more $2.2 million each year on the golf course and the community center.

Mitchell, the Little League coach and the head of the pro-Prop. 454 group, describes poor conditions for his players at fields being used at nearby schools — dry fields with little to no grass, with players dodging gopher holes as they play.

“There are seasons where there is no water,” he said.

He said he and other coaches have been working for over a year to persuade town officials, and now residents, to back the bond proposal.

And it is not just a problem for those playing baseball. The local youth football team doesn’t have a field either, he said. “They have to travel with lights and generators,” Mitchell said.

With hundreds of children in town playing sports, Mitchell said the local teams often rely on using fields in nearby communities — when they are available.

“Some of our kids have been playing for seven or eight years and never played in Oro Valley,” he said.

The Nov. 7 election is being conducted as a polling place election. However, voters who have requested an early mail ballot will receive a mail-in ballot for this special election.

The deadline to register to vote in this election has already passed.

For more information, contact the Pima County Recorder’s Office at 724-4330.

Arizona basketball: On Jackson-Cartwright's injury, the unknowns, and some levity

Here's the rundown from Arizona's visit to Pac-12 media day on Thursday, as Sean Miller, Allonzo Trier and Dusan Ristic stepped into the spotlight.

Tate is expected to make the second start of his college career Saturday when the Wildcats take on UCLA. A lot has changed since the first one.

Greg Hansen and Star sports editor Ryan Finley talk about what it was like in Boulder for UA quarterback Khalil Tate's historic performance, h…

Rodriguez has more than $20,000 on hand for Tucson council campaign vs. Kozachik

With Kozachik deciding against donations, his rival for City Council raised more than $21,800 in September.

Voters in Oro Valley will decide on a $17 million general obligation bond package to pay for improvements to Naranja Park.

A view of the dog park with Pusch Ridge in the background at Naranja Park. Nearly 72 percent of voters rejected the proposed bond package.