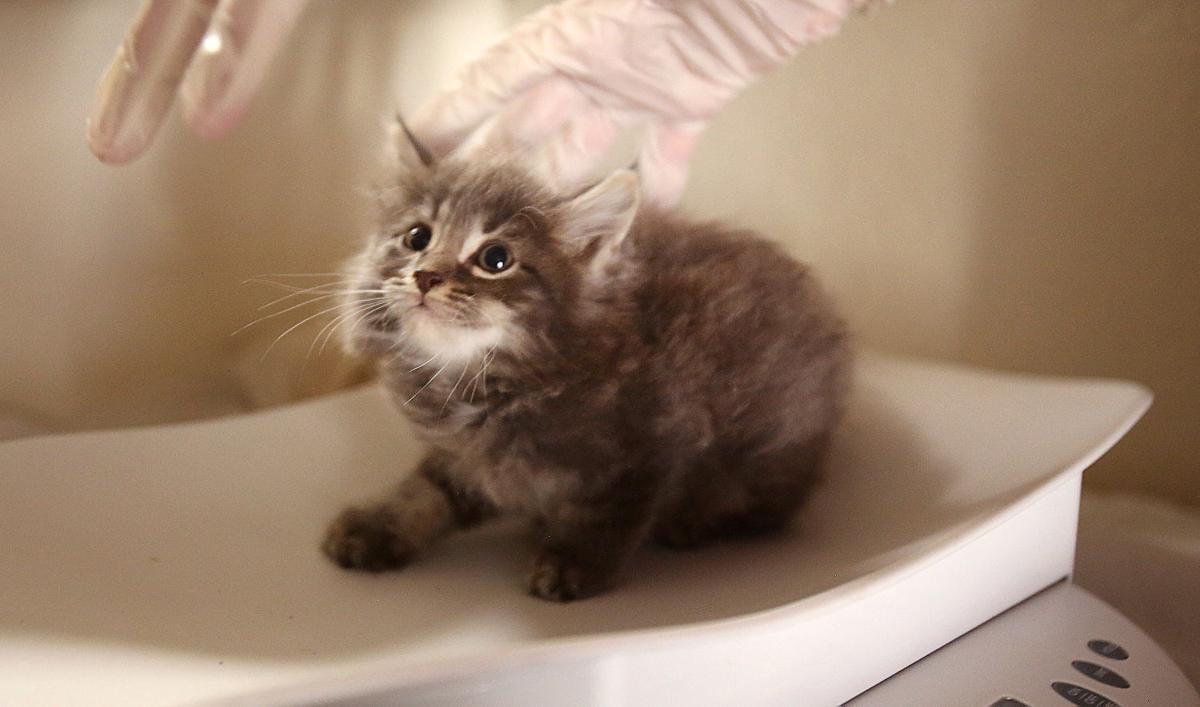 One of the six kittens that Shannon Macke is fostering is weighed Friday. At 2 pounds, the kittens can be spayed or neutered and then they can be adopted through Pima Animal Care Center. If you find stray kittens, PACC asks that you leave them alone and watch for the mother to return. 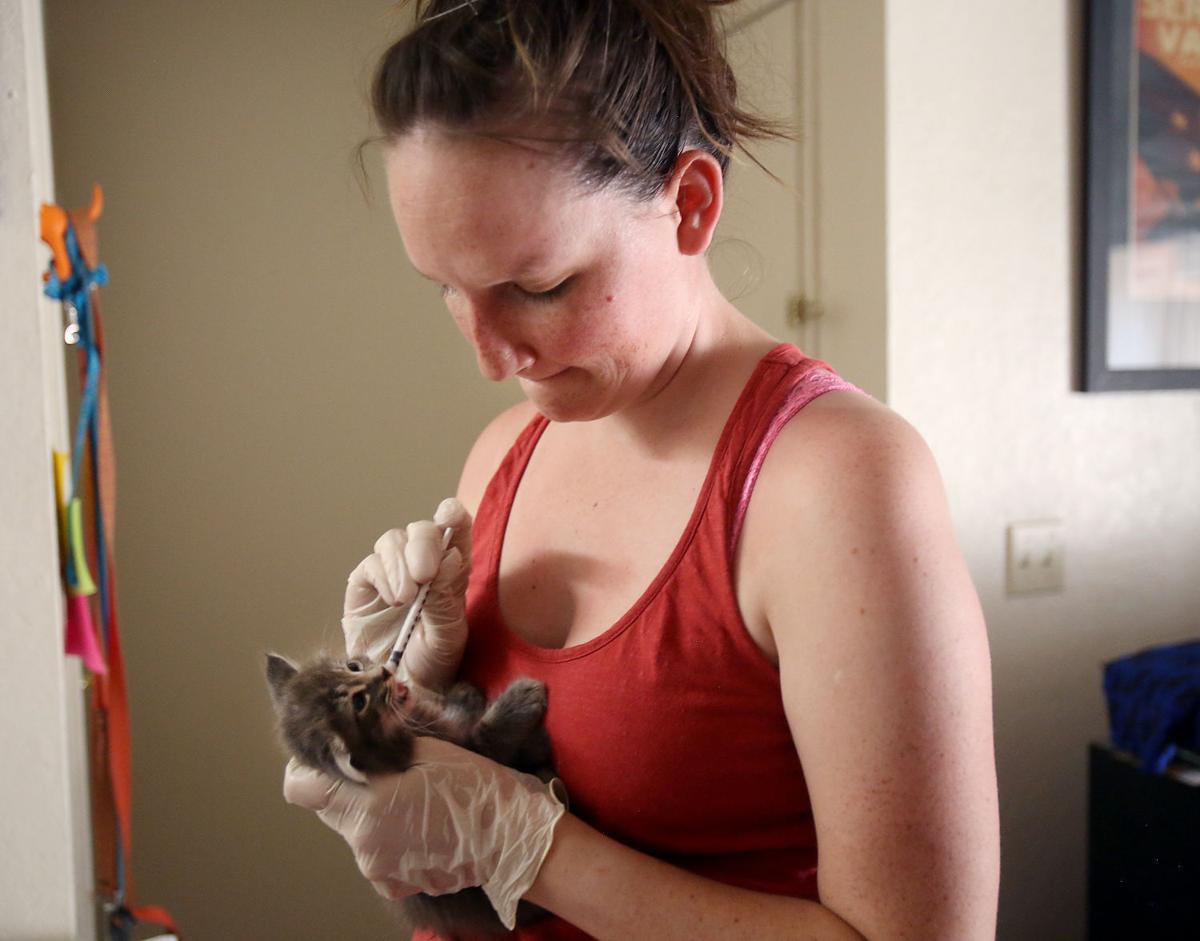 Shannon Macke gives antibiotics to one of the six kittens she’s fostering at her home on Friday June 03, 2016. When the kittens reach two pounds, they can be spayed or neutered and then they can be adopted through Pima Animal Care Center.

Pima County residents who happen upon a heap of cute, mewing kittens should do one thing, at least at first, and that is … nothing.

Each year during kitten season, baby cats are frequently taken to shelters with bellies full of milk and no pressing need for rescue. More often than not, momma was taking care of them and that’s what needs to continue until they are ready to wean.

Staff at the Pima County Animal Care Center and other local feline friends are asking that concerned residents don’t move kittens and instead assess the situation to see if the they are really in danger.

“This is a challenge we have every summer,” said Justin Gallick, executive director of community engagement for PCACC. “People are finding young litters and, rather than leaving them where they have a mother to care for them, they bring them in.”

PCACC is receiving anywhere from 10 to 30 kittens per day. Gallick said they then have to scramble to find foster homes where people can keep them in an enclosed area and feed the cats every two hours.

Gallick said PCACC placed about 150 kittens in foster care in May and will likely place over 200 more this month. June and July are their busiest months, he said.

Kittens are in need of that constant care from their mothers for the first four weeks of life. The likelihood of survival is much lower if they are being bottle-fed, and especially if they miss out on the nutrient-rich colostrum they get from their mother during their first week of life.

People often mistakenly believe cats have been abandoned when their mother may have just left in order to eat or get water.

The Hermitage No-Kill Cat Shelter has been taking in as many kittens as it can, along with nursing or pregnant mother cats.

“I think we’ve already taken in about 35 felines. We currently have over 75 kittens on hand and these will be made available to the public for a special fee at our annual “Kitten Shower” which will be held here at the shelter on June 18,” said Lee Bucyk, the organizations’s executive director.

Part of the long-term plan to cut back on the number of kittens born here each year is being carried out by Stephanie Stryker and others with the Tucson Community Cats Project, which got its start in Sept. 2014.

Stryker said their nonprofit, which is part of the Best Friends Animal Society, provides free trapping, spaying or neutering and return for feral cats as well as shots they might need and a flea and tick preventative.

“Our goal is to humanely decrease the cat population through spay and neuter,” she said. “We want to make sure mom is humanely trapped and fixed. It’s great to get the kittens off the street but there’s going to be more unless we find the mom.”

The Pima County Animal Care Center is looking for families who can help foster kittens. To learn more, call 724-5900 or visit http://webcms.pima.gov/cms/One.aspx?portalId=169&pageId=259555

Need help with stray cats in your area? Contact the Tucson Community Cats Project by phone or text at 520-820-4492 or email tucsoncats@bestfriends.org.

The Animal Care Center recommends people do the following if they find kittens:

• Wait and watch to see if the mother is coming back or if they are truly orphaned.

• Observe the kittens from a minimum of 35 feet or more and use a camera zoom or binoculars if possible so you don't get too close.

• Don't check on the kittens too often, as this can put the mother on alert and keep her away.

• Make sure the kittens are not in immediate danger by checking for dangers in the area, such as reactive dogs or traffic. Remove them only if they are in immediate and serious danger.

• If the mother cat returns, leave the kittens with her until they are able to eat on their own.

• Kittens will begin eating wet food when they are about a month old. The best age for socializing kittens is five to six weeks of age.

• Keep in mind that if there's a single kitten or two, the mother might be relocating them and has left them behind temporarily, as she can only carry one  in her mouth at a time.

Colleen Johnson returned to Perryville in January; she died of undetected cancer.

One of the six kittens that Shannon Macke is fostering is weighed Friday. At 2 pounds, the kittens can be spayed or neutered and then they can be adopted through Pima Animal Care Center. If you find stray kittens, PACC asks that you leave them alone and watch for the mother to return.

Shannon Macke gives antibiotics to one of the six kittens she’s fostering at her home on Friday June 03, 2016. When the kittens reach two pounds, they can be spayed or neutered and then they can be adopted through Pima Animal Care Center.