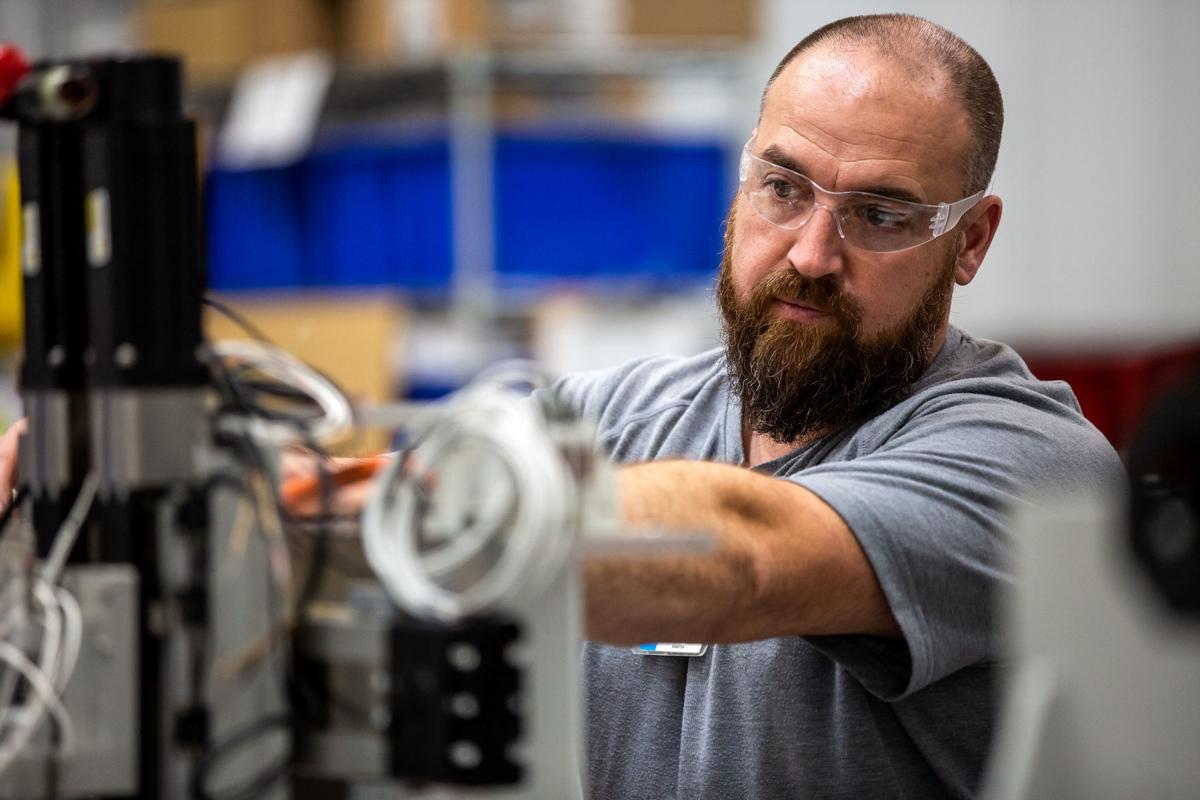 Employees of CAID’s automation division take mostly off-the-shelf components like conveyors and robotic arms and design and custom-build automated assembly lines costing about $300,000 to $3 million each for customers including medical-device companies. 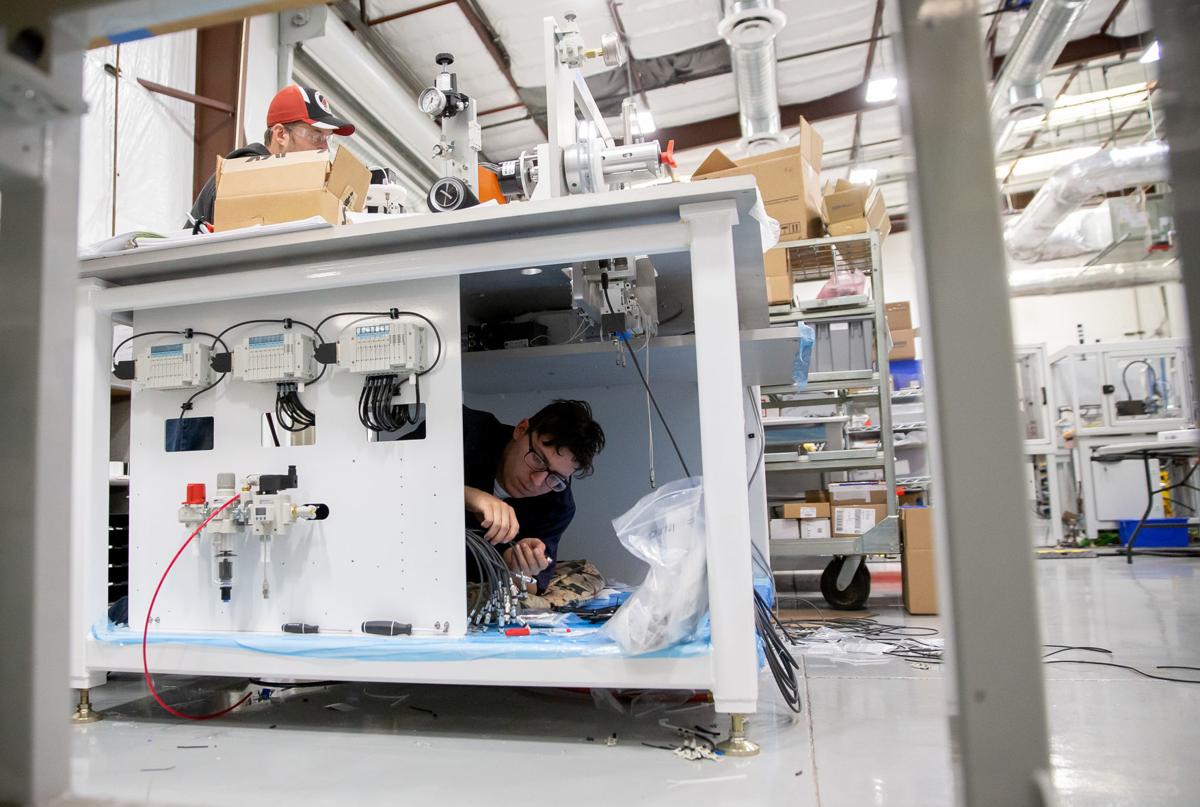 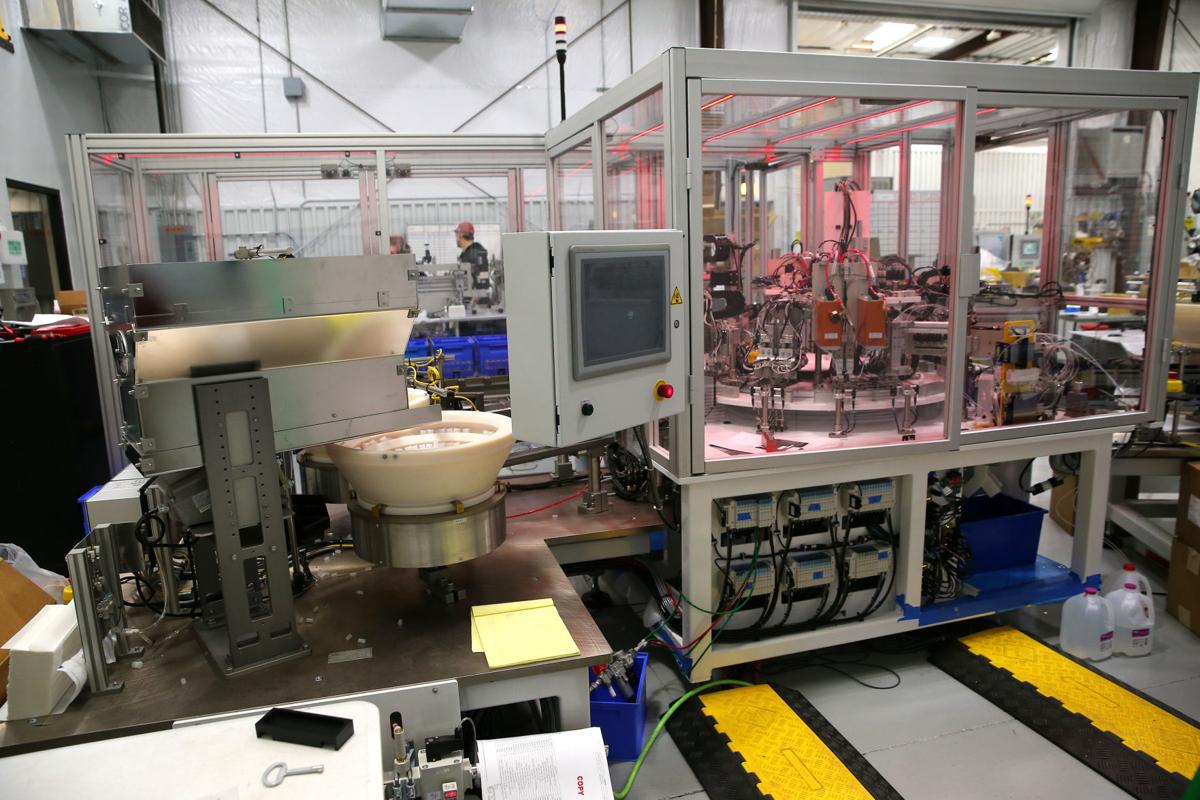 The automation division at CAID Industries started with 12 employees. Now there are 38. 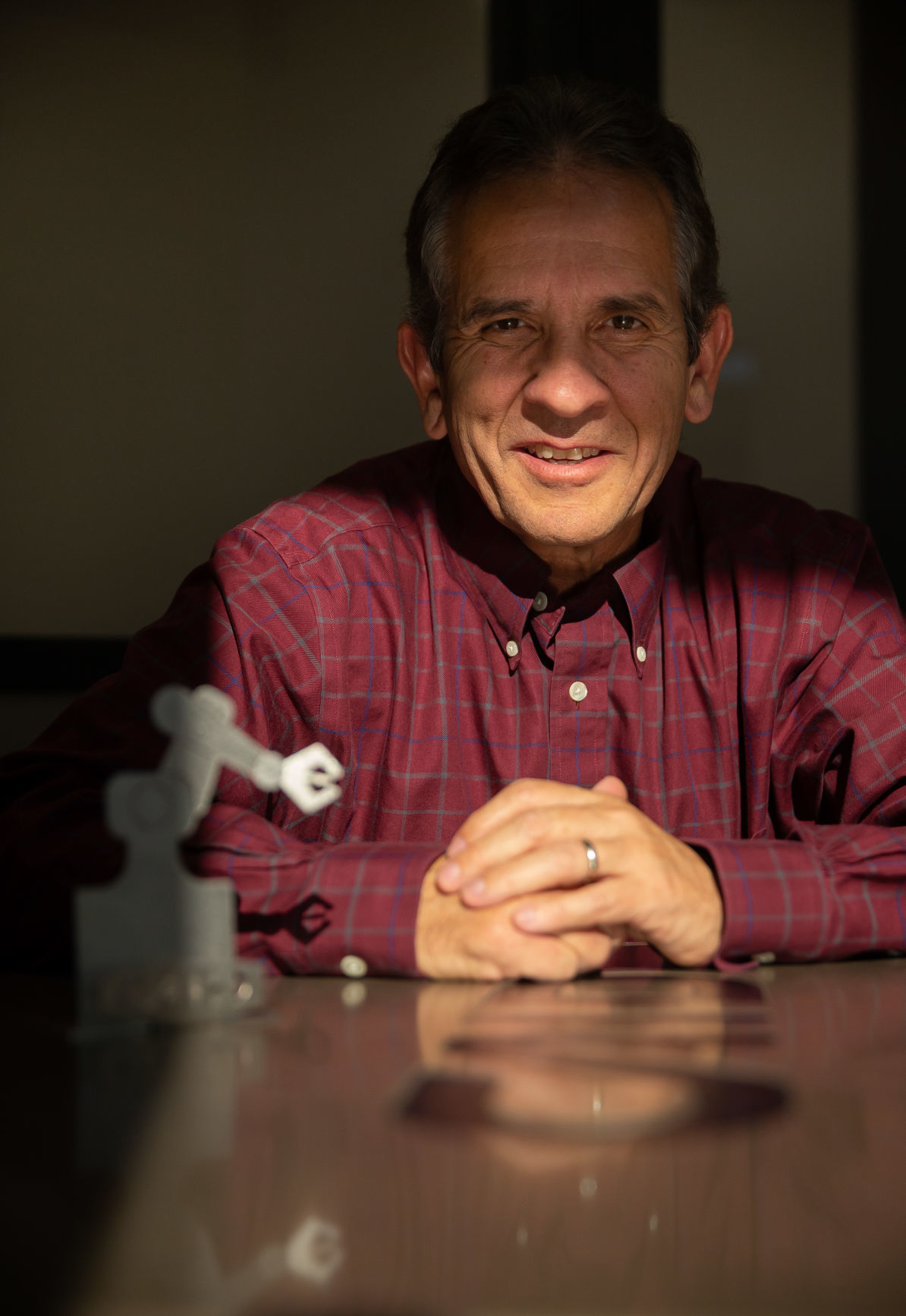 Juan Cardenas, vice president of sales and applications engineering at CAID, says “what people don’t understand is, if you don’t automate, those jobs go to China.”

No, robots aren’t coming to take all of our jobs.

But there’s a good chance automation will at least significantly change your job over the next decade — particularly if your job isn’t a high-skill occupation.

In Pima County, an estimated 154,458 jobs or 42.4% of county jobs in 2017 are at “high risk” of being replaced or disrupted by automation in the next decade or so, according to a study issued earlier this year by the Economic and Business Research Center at the University of Arizona’s Eller College of Management.

That’s slightly less than the national average of 45.7% of jobs at risk, defined as occupations that have a 70% chance or greater of being replaced or significantly impacted by automation.

But even though automation has and will continue to displace some workers, the greater effect will be changes to existing jobs, said UA economist George Hammond, who co-authored the study for the Pima County Workforce Investment Board based on several national studies.

Mark Muro, senior fellow with the Brookings Institution in Washington, D.C., and a former Tucsonan, came to similar findings in a study he co-authored in January.

“We can’t tell whether we’ll have a jobless future — I don’t believe it — but we certainly know there will be massive change in the labor market and almost everyone’s job will be reconfigured,” Muro said. “Humans are going to need to buckle their seat belts and also buckle down and learn what skills are in demand in a machine-filled future.”

While automation has been advancing in the manufacturing sector for decades, a new age of computerization and automation is being ushered onto the factory floor with new technologies such as artificial intelligence — essentially, making machines with human abilities like visual perception, speech recognition and decision-making.

And the advance of the “internet of things” — a marriage of high-speed data networks with a variety of devices — has driven automation nationwide in sectors like supermarkets and fast-food.

Such advances are apparent every day in Tucson and across the country, as more supermarkets offer self-checkout stands and even scan-as-you-shop shopping, and McDonald’s rolls out touch-screen customer ordering kiosks.

Automation in sectors such as manufacturing may be apparent only to workers but is advancing rapidly, with local examples including assembly robots Raytheon Missile Systems has built into its advanced missile plants.

While some automation can directly replace human workers to perform repetitive tasks, Hammond said that in many cases humans will learn to work with ever-smarter machines.

“There will still be humans involved, but they’ll be doing different things, and in some cases there will be fewer of them,” he said. “We’re not going to be working for machines in the future, but we’ll increasingly be working with them.”

Touting its automation advances, Raytheon uses the term “collaborative robotics,” or “cobots” for short, to describe the way its workers are increasingly working with robots, often to perform ultra-precise functions and promote safety.

While some jobs will be lost and many will change, as with any industrial revolution there will be opportunities as automation boosts productivity, Hammond said.

“These industrial revolutions are not new and when they happen they create wealth — a lot of wealth — and they also disrupt, and one of the markets they disrupt is labor markets,” he said. “What we don’t know and what I don’t speculate on in the report is the new occupations and the new industries and the new tasks that will spring up as we move forward.”

One major worry is that the labor force won’t be ready for the rapid pace of change.

“Automation and artificial intelligence have driven huge increases in computer power and telecommunications bandwidth, which could drive the downside of this disruption to happen very quickly and way before we get around to creating the new occupations and new industries,” Hammond said.

Meanwhile, the trend is only accelerating as companies worldwide are upping their bets on automation.

The global industrial automation market was valued at $157 billion in 2018 and is expected to reach about $297 billion by 2026, for a compound annual growth rate of more than 8%, according to a recent estimate by Fortune Business Insights.

Tucson is in some ways at the forefront of advancing automation technologies — and training workers to use them.

The UA College of Agriculture and Life Sciences is working on advanced farming technologies including automated weeding systems.

Chinese-backed startup TuSimple continues to test self-driving trucks — with human monitors aboard for now — from a tech center on Tucson’s southeast side near Interstate 10.

“We’re very excited about it, because one thing we’ve talked about is, we’re always responding to industry, we’re always one step behind, we have to start becoming more predictive of what the trends are going to be,” said Ian Roark, PCC’s vice president of workforce development and strategic partnerships. “We’re trying to get ahead rather than to sit back and see what happens and be behind the curve.”

Community colleges are the biggest providers of technical career training, and PCC has been upping its game to train workers in the latest technologies.

Pima broke ground in November on a new Automotive Technology and Innovation Center at its Downtown Campus and is in the process of a $15 million expansion of its acclaimed Aviation Technology Center at Tucson International Airport.

The automotive center is the first planned in a $35 million expansion and renovation of the Downtown Campus to support PCC’s new Center of Excellence in Applied Technology, which focuses on transportation, logistics, advanced manufacturing, engineering and a wide range of building and construction trades.

To beef up its manufacturing tech program in response to demand from local industry, Pima has added state-of-the-art computerized equipment to its certified machining program, which will have room to expand at the Downtown Campus when the automotive program moves to its new digs.

The school also has worked with the industry and the Pima Joint Technical Education District to establish a path for high school grads of certified machining programs to continue to associate degree programs at the community college.

At the university level, under the leadership of UA President Robert C. Robbins, its strategic plan is built on preparing students to thrive in the Fourth Industrial Revolution — a time of augmented intelligence and the fusion of the digital, physical and biological worlds.

Robbins sees the Fourth Industrial Revolution as an opportunity for the UA to mitigate the negative effects, and to react in a productive way, creating a workforce that can respond to the changes.

While experts warn of job losses from automation, at least one Tucson company is creating jobs in automation.

CAID Industries, a longtime metal fabricator, launched an industrial automation division in 2012 with about a dozen employees.

Now the automation division has 38 employees that take mostly off-the-shelf components like conveyors and robotic arms and design and custom-build automated assembly lines costing about $300,000 to $3 million each for customers including medical-device companies.

“What people don’t understand is, if you don’t automate, those jobs go to China,” he said. “By automating, you start creating other jobs.”

“Absent automation, much of the auto industry wouldn’t be here right now, this is one of the main ways the United States has remained competitive,” Muro said. “But it’s also hollowed out the manufacturing workforce and imposed great changes and a lot of stress.”

Muro said major moves to automation have been driven by labor shortages in places like Japan and Germany because of their aging labor populations, and the U.S. faces similar challenges.

The automation wave is expected to hit vulnerable lower-income populations, including Hispanics who tend to work in jobs more at risk for automation, Muro said.

The Brookings report recommends that policymakers invest in “upskilling” and “reskilling” workers, and reform and expand income support for low-wage workers, including a specific benefit for displaced workers.

“The Future of Work” panel discussion, put on by the Making Action Possible (MAP) Dashboard, Arizona Daily Star and University of Arizona, will not only focus on the impact of artificial intelligence on the Southern Arizona workforce, but also on how students can adjust their education strategy to thrive in the automated future, how educators can learn from businesses and community officials to prepare a tech-proficient workforce, and how adults in the workforce can discover paths to retraining and re-engineering their careers.

Risks ahead including slowing global growth, decelerating consumer spending and tariff and trade uncertainty, suggesting a slowing economy in 2020 and 2021.

Income gap widens: 20% of households have 50% of Pima County's wealth

The gap between the richest and the poorest in Arizona has grown wider over the past five years, according to data released Thursday by the U.…

TEP says rates need to be increased to cover higher capital costs and maintain service performance as it shifts away from coal-fired power generation.

In 2018, Tucson ranked seventh among 12 peer metro areas in the West for high-speed Internet access, according to the MAP Dashboard, a project of the University of Arizona's Economic and Business Research Center.

The company with a major tech center in Tucson is adding a Phoenix-El Paso route to its existing UPS run from Tucson to Phoenix.

Employees of CAID’s automation division take mostly off-the-shelf components like conveyors and robotic arms and design and custom-build automated assembly lines costing about $300,000 to $3 million each for customers including medical-device companies.

The automation division at CAID Industries started with 12 employees. Now there are 38.

Juan Cardenas, vice president of sales and applications engineering at CAID, says “what people don’t understand is, if you don’t automate, those jobs go to China.”