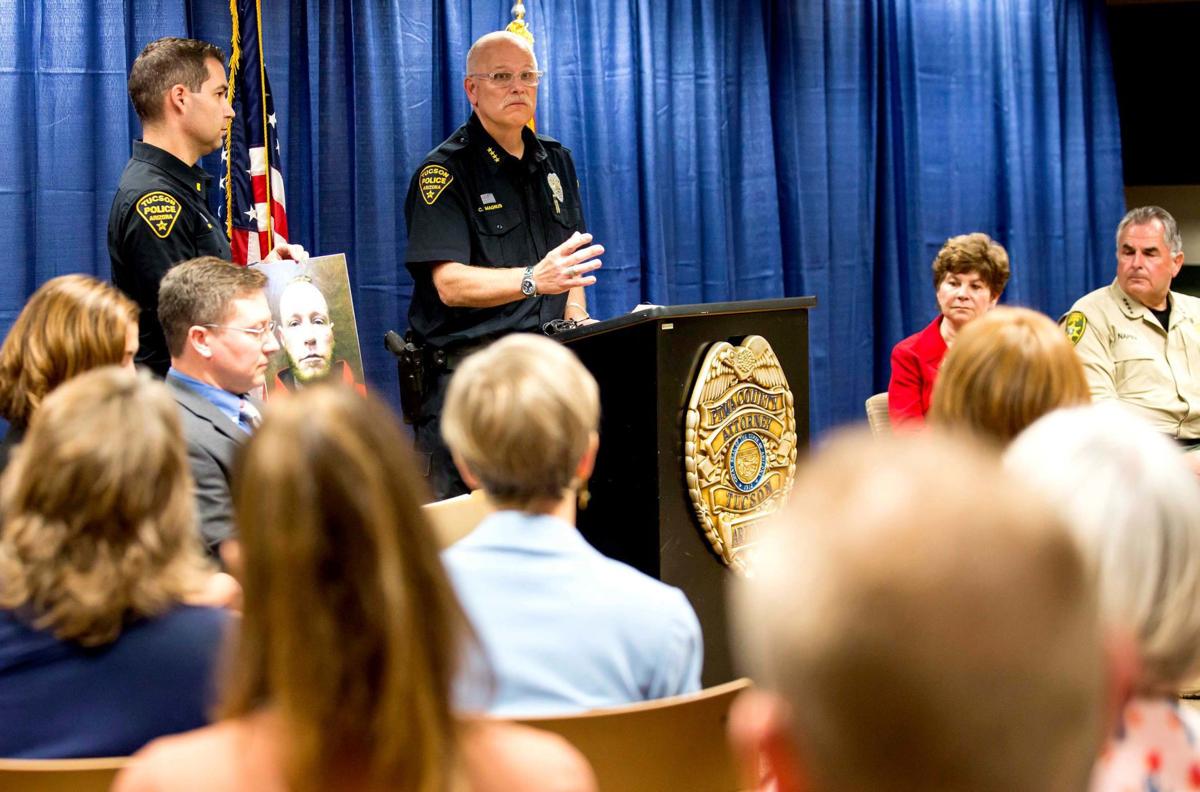 Tucson Police Chief Chris Magnus uses a picture of convicted serial rapist Nathan Loebe to provide an example of how a federal grant and rape kits can help with prosecutions. 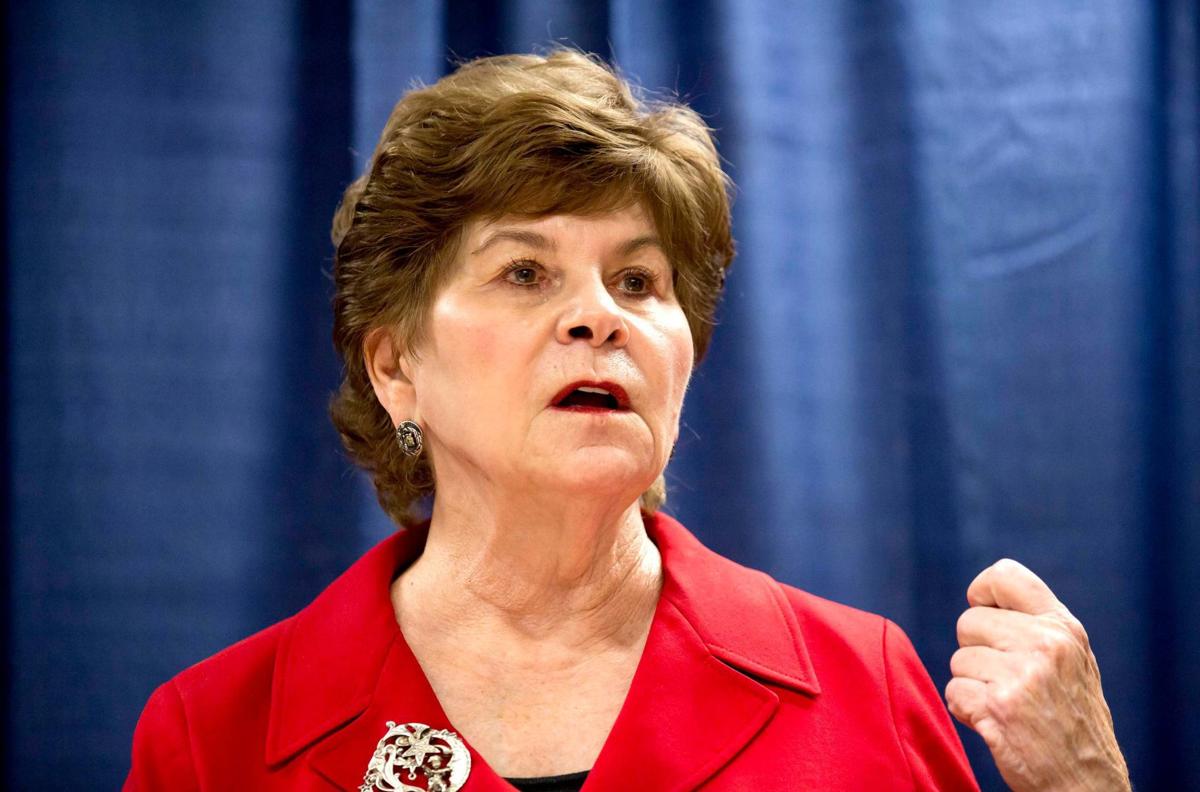 The funds will support a joint project titled “Out of the Shadows: Justice for Unsolved Sexual Assault Case Victims.” The project’s goal is to create a countywide, collaborative response to sexual assault.

“Holding these offenders accountable is extremely important not only for the victims to get closure and to feel safe, but also for the community,” she said during a Tuesday news conference at the Pima County Legal Services Building.

About $800,000 will go to the Police Department, where two cold-case detectives will be hired to investigate cases, said Tucson Police Chief Chris Magnus. Some of the department’s funds will also be used for further testing on rape kits.

Having more resources focused on cold cases will allow other detectives to keep up with incoming sexual assault cases, Magnus said.

While the department was able to use a $1 million grant in 2015 to test all its backlogged rape kits, sexual assault reports are constant, he said.

“We’ve made sexual assault cases one of our highest priorities,” Magnus said. “A priority which fortunately we share with our (county) prosecutor’s office.”

Ten years ago, LaWall learned the county had a backlog of 2,000 untested sexual assault kits. Since then, the police and sheriff’s departments have worked with her office to reduce that backlog, LaWall said, adding that testing a rape kit costs at least $500.

The Sheriff’s Department has a backlog of about 465 rape kits, half of which are being tested through the Arizona Department of Public Safety, said Pima County Sheriff Mark Napier.

With the grant, the Sheriff’s Department will be able to test all untested sexual assault kits and upload DNA results to national databases.

“This grant will make a difference,” Napier said. “It will result in bringing perpetrators to justice and reducing further victimization in Pima County.”

The Sheriff’s Department will also use some of the grant money to add one cold-case detective to its staff while the Pima County Attorney’s Office will hire an additional prosecutor to handle special victim cases.

Alan Goodwin, the special victims bureau chief of the Pima County Attorney’s Office, said when the county initially received a $1 million grant in 2015, he was skeptical of the idea that they needed to test all rape kits, when some tests wouldn’t lead to new information.

“DNA may not be particularly useful in an isolated case if you view that case in a vacuum,” Goodwin said. “But what it enables us to do is to link cases together. It enables us to find those sex offenders who are truly predatory in their nature.”

Magnus and Goodwin used Nathan Loebe’s case as an example of how helpful rape kits and the $1 million grant in 2015 were in prosecuting a serial rapist.

Several women were victims of Loebe’s crimes between 2003 and 2015, but their cases went unsolved until 2017, when police and prosecutors were able to build a case against him using DNA evidence.

Along with investigating sexual assault cold cases and prosecuting perpetrators, the county will use the grant to hire two victim advocates at the County Attorney’s Office, LaWall said.

Advocates will facilitate communication between victims and detectives.

They will also work with victims to provide information about their case and provide them with crisis intervention.

Assault is alleged to have occurred at the Alpha Sigma Mu fraternity house in August 2017.

The founder of the #MeToo Movement and a former White House counsel are scheduled to give lectures at the UA that are open to the public.

Victims will have until age 30 to sue their abusers; optional temporary "window" created for those already past that age to seek legal action.

Sex abuse deal could clear way for $11.8B AZ budget

PHOENIX — The fate of an $11.8 billion budget could be decided Monday as lawmakers debate the question of the liability of churches, the Boy S…

Tara Myers’ sister was shot and killed a five-minute walk from their childhood home in Sells.

Training, creation of protocol planned for the local campus following a recent incident.

Tucson weather: So long to those 90-degree temps

Although conditions remain dry Wednesday, it'll be the last day of the week with temperatures in the 90s.

A third man has been sentenced in the fatal stabbing of a fellow inmate during an attack at the Arizona State Prison Complex in Tucson, accord…

A Pima County sheriff’s deputy was arrested Monday for allegedly shoplifting at a Walmart in Oro Valley, officials said.

Tucson Police Chief Chris Magnus uses a picture of convicted serial rapist Nathan Loebe to provide an example of how a federal grant and rape kits can help with prosecutions.