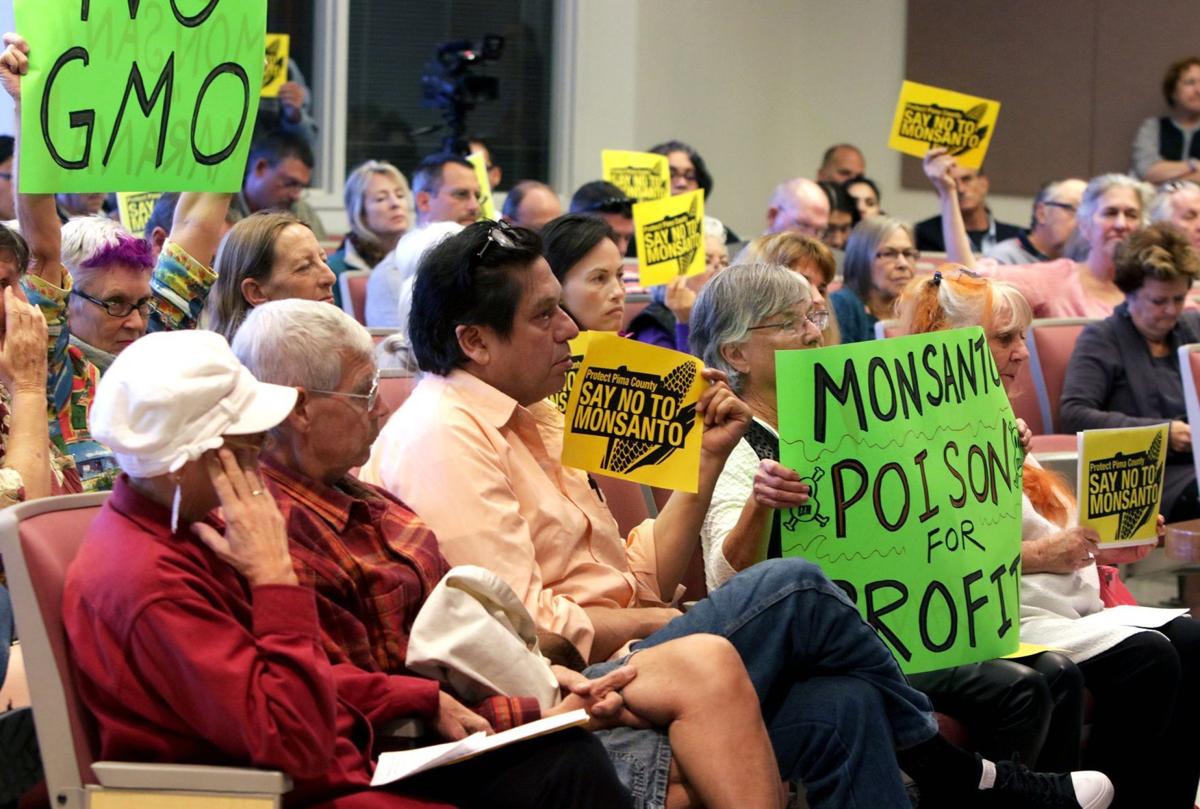 A large crowd turned out for the Board of Supervisors meeting Tuesday, where the discussion focused on extending a special tax zone for Monsanto. 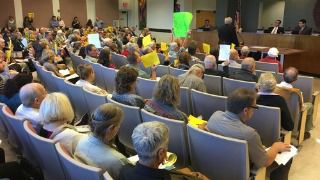 A large crowd attends the Pima County Board of Supervisors meeting to discuss Monsanto on Tuesday, Nov. 22, 2016.

After hearing several hours of public comments from dozens of speakers, who were almost unanimous in their opposition to agribusiness giant Monsanto’s plan to come to Pima County, the board of supervisors decided to delay a vote on potential tax breaks until Feb. 21.

They did agree to establish an Agricultural Science Advisory Commission to address some of the concerns raised by the speakers. The vote to delay was 5-0.

A sea of yellow signs reading “Say no to Monsanto” greeted supervisors as they opened Tuesday's meeting.

In exchange for commitments to spend at least $90 million on the development and hire at least 50 people at an average salary of roughly $44,000, the supervisors were considering the company’s application for so-called foreign trade zone status, which would substantially reduce its property tax burden over the next 10 years.

The designation would drop the property’s assessment ratio from 15 percent to 5 percent. Documents obtained by the Star show the annual difference in property taxes would be paid to the county after $96 million in development would be around $370,000 lower with the FTZ rate.

It is the U.S. Department of Commerce, not the county, that approves FTZ applications. The property tax reductions are established by state law, according to a memo from County Administrator Chuck Huckelberry to the board.

A number of speakers criticized providing the Fortune 500 company with those tax breaks.

“Marana is a poor farming community,” speaker Wendy Wiener said, echoing many others. “Why don’t we give them tax breaks?”

In an October memo to Supervisor Ally Miller, County Administrator Chuck Huckelberry pointed out that if the land were to remain undeveloped, it would bring in roughly $20,000 in all property taxes, but $11 million if the development proceeds, even with the FTZ designation. Additionally, the company’s move is estimated to bring about roughly $284 million in economic impacts between 2016 and 2025, according to Sun Corridor Inc.

Citing those benefits, as well as what he described as Monsanto’s “demonstrated history of innovation, Tucson Metro Chamber CEO Michael Varney was one of a handful to speak in support of approval.

After placing a handful of what he said was genetically modified cotton on the table, Jack Mann, head of the Arizona Farm Bureau Federation in Pima County, lent his voice in support as well, saying the greenhouse presented an “opportunity to try to develop and improve our production.”

Monsanto has already purchased 155 acres near Marana, at the intersection of Twin Peaks and Sanders roads. The company intends to break ground on a 7-acre corn-growing greenhouse before the end of 2016, according to a memo from Huckelberry.

Dan Contorno, the chief financial officer of the Marana Unified School District, said he and other officials are “excited about some of the educational benefits this facility will bring to our community.”

The district’s board recently approved an arrangement with Monsanto in which the company will give a one-time donation of $500,000 to a foundation affiliated with the district and pay a smaller annual property tax bill. The deal would save the company roughly $3.4 million over 10 years, as first reported by the Star.

The proceedings were far more emotional than typical board meetings, with several speakers crying while addressing the board. Another, who declined to provide her name to the Star, addressed Supervisor Ray Carroll directly shouting: “Look at me! I'm speaking to you!”

She went on to say she would personally participate in civil disobedience to block the project, citing ongoing clashes surrounding the North Dakota Access Pipeline as an example.

In a moment that brought smiles to opponents, supporters and supervisors alike, 7-year-old Katie Fox told the board that she opposes the project because of her love for bees, adding: “I don’t like Monsanto because it kills bees,” seeming to reference the claim of critics that some agricultural inputs may be linked to the phenomenon of hive collapse. Her mother Carrie Fox and 10-year-old brother Gabriel Fox also spoke in opposition to Monsanto.

Monsanto: Innovative technology can help farmers in the face of water scarcity and climate change.

Its 155-acre purchase stirs questions about what might go there besides the seven-acre greenhouse.

Huckelberry has been the county's top employee for nearly 22 years.

A large crowd turned out for the Board of Supervisors meeting Tuesday, where the discussion focused on extending a special tax zone for Monsanto.

A large crowd attends the Pima County Board of Supervisors meeting to discuss Monsanto on Tuesday, Nov. 22, 2016.