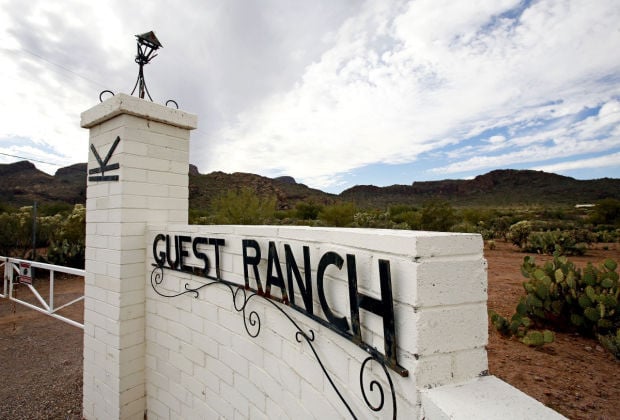 Lazy K Bar Ranch began as a homestead in 1928 and was later a guest ranch. It’s a half-mile from Saguaro National Park West.

Some neighbors and environmentalists object to the Lazy K project, which they say will encroach on an important wildlife corridor. 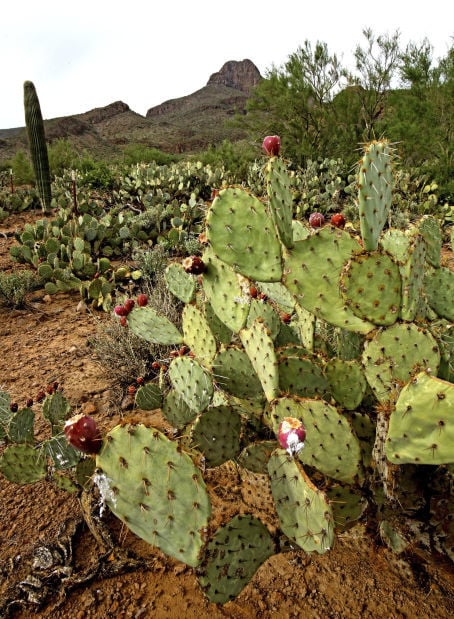 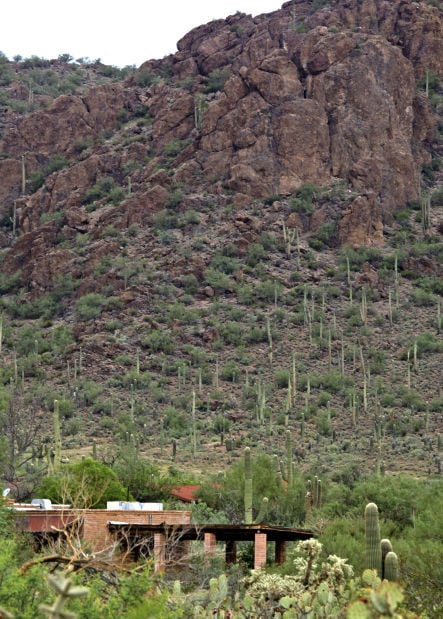 A structure is visible on the now-closed Lazy K Bar Guest Ranch.

A plan to build 178 homes on the historic Lazy K Bar Guest Ranch is headed to a public hearing this week, more than two years after a similar proposal was rejected twice by the Marana Town Council.

But this time around, to the dismay of opponents, developers have found a way around a statute that previously required the proposal to get support from a supermajority of Town Council members.

The development proposal includes a zoning change to allow for increased density on the 138-acre property a half-mile north of Saguaro National Park West. Under its current “resort and recreation” zoning, the land could have about 42 homes — one home per 3.3 acres — or a 600-unit hotel.

The plan will be considered by the town’s Planning Commission on Wednesday. If the commission recommends approval, it will go before the full Town Council in May or June.

Once again, developers face stiff opposition from neighbors and environmentalists who object to the project’s encroachment on a critical wildlife corridor and national park lands. Opponents say the project continues a pattern of incremental “up-zoning” in the formerly remote area and is a missed opportunity for a creative and environmentally sensitive project.

The proposal had initially secured the blessing of the Coalition for Sonoran Desert Protection, which had pressed the design firm, The Planning Center in Tucson, to shrink the project’s footprint in the wildlife corridor that connects the Tucson and Tortolita mountains.

But the coalition can no longer commit to supporting the plan in light of recent changes, including infringement on natural washes, said executive director Carolyn Campbell. As the latest proposal is still being tweaked, Campbell requested a month delay in the public hearing, but that doesn’t seem likely, she said.

“We’ve been clear about what the wildlife needs. If they can provide that, we’re OK, but so far we haven’t seen it,” she said.

Developers may have reason to be optimistic about securing council approval this time around.

Back in 2015, two “nay” votes — from Councilmembers Patti Comerford and Carol McGorray — were enough to derail the development plan, which needed support from a supermajority of the seven-member council in order to pass.

Under state statute, if 20 percent of adjacent property owners oppose a zoning change, the change requires support from three-quarters of Marana Town Council members to go into effect.

However, the statute also specifies that the zoning change must be within 150 feet of the opposing neighbors to trigger that requirement, said Marana Town Attorney Frank Cassidy.

This year, developers added a 150-foot strip around the perimeter of the Lazy K property that won’t be rezoned under the development proposal, rendering neighbors’ opposition moot. Now, a simple majority of four “yea” votes is needed for the plan to pass.

The move seems “manipulative of the process, and not in tune with working with the local community,” said Scott Stonum, chief of science and resource management at Saguaro National Park.

“It’s not ethical,” said Barbara Rose, a 30-year resident of Scenic Drive near Lazy K and a vocal opponent of the development plan. Rose is still hopeful that opponents can persuade planning commission and council members to hold out for a better alternative at Lazy K. Options include a retreat center, a small-scale boutique hotel or an educational center that is a public-private partnership, she said.

“This is a national treasure,” she said. “A conventional development of as many homes as you can possibly get, squeezed in to barely accommodate the minimum environmental requirements, it just doesn’t make any sense.”

”STEPPING BACK IN TIME”

The Lazy K proposal includes at least 60 percent open space on the property and includes a hiking trail, preservation of the original stone homestead and the existing outdoor fireplace, patio and event lawn as a common area, said Linda Morales, CEO of The Planning Center, the planning and design firm hired by property owners Jim Shiner and Peter Evans. All homes in the gated community will be single-story and could be priced between $400,000 and $600,000.

“I won’t say everybody is completely on board with it, but we’re very much ahead of the game as far as where we were last time with people being OK with this proposal,” Morales said.

Dan Withers — who owns 20 acres directly southeast of the property, plus 14 acres to the east — said he’s disappointed in the proposal, and that’s not because he’s against growth.

“I’m a builder. I’m pro-development,” said Withers, who owns D.L. Withers Construction. But, he said, Lazy K represents a piece of history. “It’s a shame to see it become just another subdivision.”

Before Lazy K shut down its operations in 2007, staying at the property felt like a glimpse of mid-century Arizona, Withers said.

“You could leave the windows open and hear the coyotes at night. (I thought) ‘Boy, this is like how I remember it from when I was a kid growing up in Arizona.’ It was like stepping back in time. There’s just not many places you can do that.”

Stonum of Saguaro National Park said the incremental additions of higher-density developments around the park are taking their toll.

“The park cannot survive as an island that’s cut off from the rest of the (natural) world,” he said. “It appears that we’re losing some of the species in the park that require a healthy landscape and a permeable landscape that they can move through and that is larger than the park, unfortunately.”

Lazy K property owners Shiner and Evans purchased the property — originally a homestead built in 1928 — in the late 1990s, when it was still part of Pima County and zoned for one home per 3.3 acres. The land was annexed into Marana in 2001, losing the protection of Pima County’s Sonoran Desert Conservation Plan, which would have required 80 percent open space on the site. Marana is working on its own habitat-protection plan, but it is still in draft form and has never been formally adopted by the town.

Facing declining water levels in their wells, some neighbors along Scenic Drive agreed to support the project in exchange for a guarantee of connection to Marana water after the development is built, as the Star reported in 2014. Morales said the development team will still honor that agreement but haven’t yet formalized the deal in writing.

An earlier version of this year’s Lazy K proposal called for 189 homes on the property. The planning firm even floated the idea of 194 homes in preliminary meetings with neighbors, before dropping back down to 178, Morales said.

For Marana Mayor and Councilmman Ed Honea, any increase from 178 homes would have been a deal-breaker.

“It’s a pretty pristine area. It’s between two mountain peaks, tucked right up against the mountains,” he said.

“I don’t have problems with growth, but I think it needs to be respectful because of where it’s located.”

Honea plans to support the proposal, as he did two years ago, but he still has concerns about the addition of 6,000-square-foot lot sizes in the newest plan. Last time around, the smallest lot size was 7,000 square feet, he said.

Councilman Dave Bowen, who also supported the plan in the two previous votes, said he’s now undecided. Since he last considered the proposal, he’s noticed a pattern of smaller lot sizes in Marana, and he thinks Lazy K could be a good opportunity for a different kind of project, with bigger lots and fewer homes per acre.

“On the other hand, you’ve got people that own the land who would like to maximize its profits,” he said. “I understand there’s a lot at stake.”

Lazy K Bar ranch began as a homestead in 1928 and reached its peak as a guest ranch in the 1950s. In recent years, business at the ranch slowed, in part due to high-density development in southern Marana that made the ranch less of a remote destination. The guest ranch closed to the public in 2007.

The area east of the project near the I-10 corridor is now filled with high-density developments, including Ironwood Reserve, Continental Ranch and Continental Reserve.

Gold poppies carpet some patches of desert at Saguaro National Park west of Tucson -- and other wildflowers add to the color show. Video by Do…

Historic ranch could give way to 178 homes

Developers want to rezone the Lazy K ranch for a gated community.

One "no" leaves the housing project lacking the unanimous vote it needed.

Wild Horses in the Tortolita Mountains

The land holding the historic dude ranch is now slated to become a 178-home subdivision.

Sixty percent of the land will be preserved, but neighbors are still unhappy over the Town Council approving 178 homes there.

Lazy K Bar Ranch began as a homestead in 1928 and was later a guest ranch. It’s a half-mile from Saguaro National Park West.

Some neighbors and environmentalists object to the Lazy K project, which they say will encroach on an important wildlife corridor.

A structure is visible on the now-closed Lazy K Bar Guest Ranch.