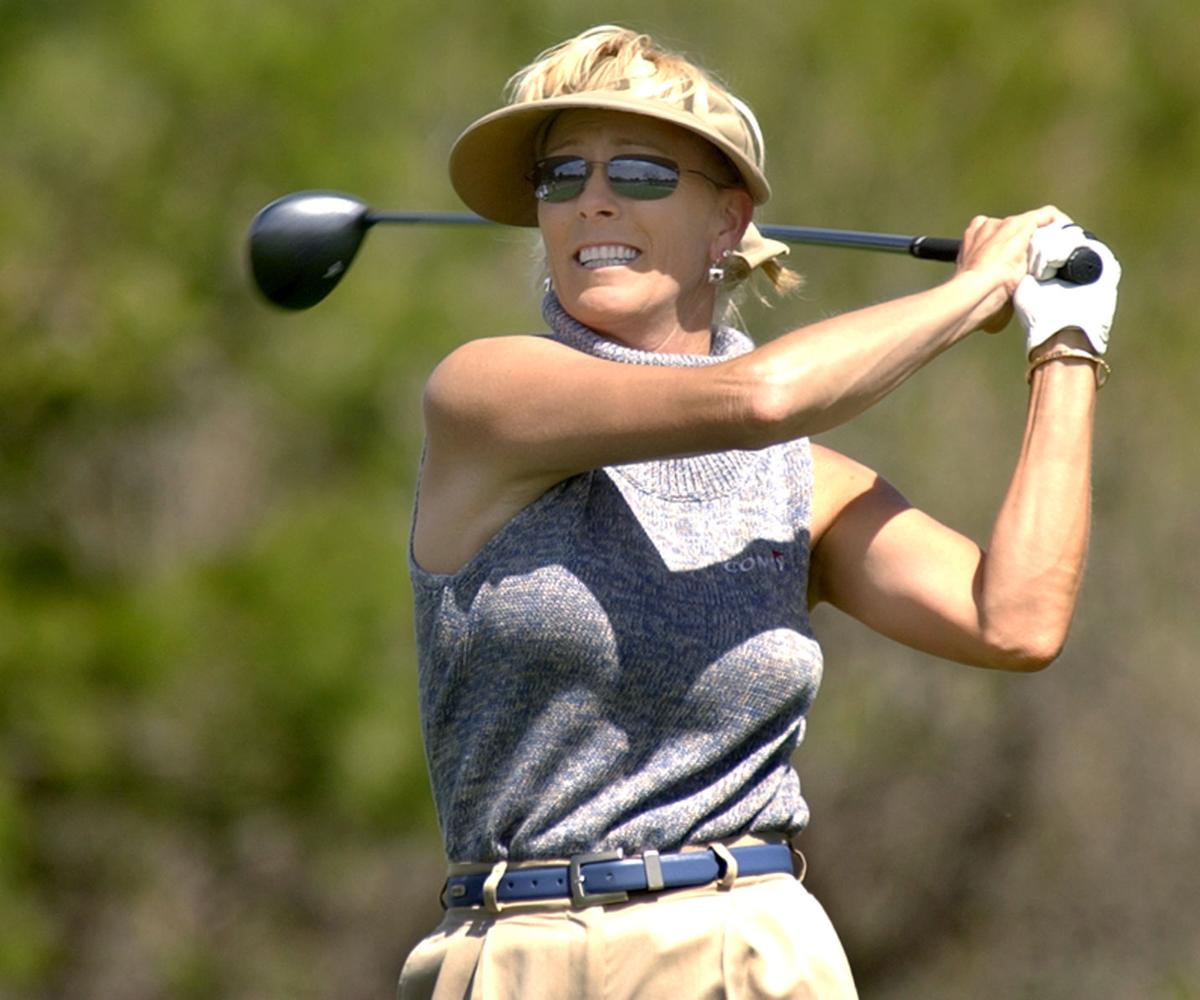 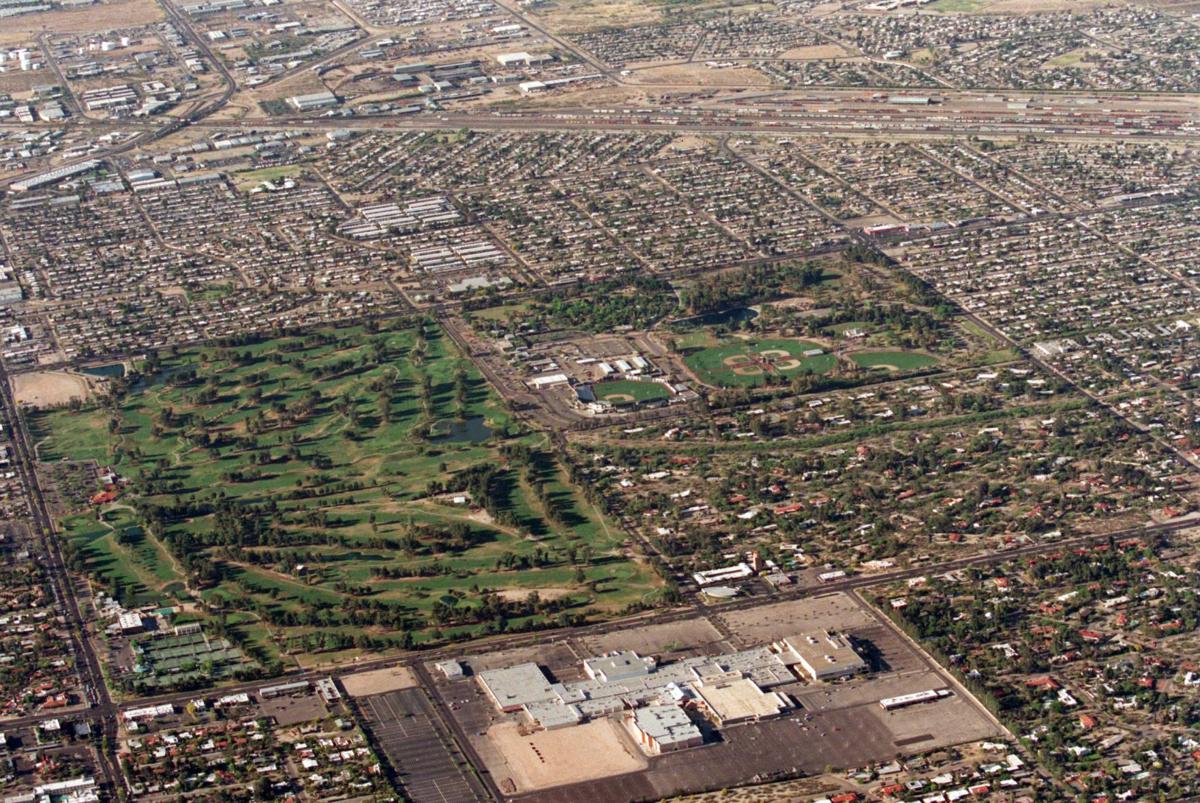 The Randolph North and Dell Urich golf courses can be seen is this aerial view in an undated photo. An unsolicited proposal from the Tucson Conquistadores suggests selling 15 acres along East Broadway to private developers to create a pro-level golf course.

The Tucson Conquistadores have outlined a new plan to remake the two 18-hole golf courses at Reid Park into a venue that could lure the PGA back to the city.

A key aspect of the unsolicited proposal from the group calls for selling up to 15 acres of the Randolph Golf Course along East Broadway to private developers, which would bring additional retail space across the street from El Con shopping center.

The group believes the sale of the property could fund a massive renovation of the city-owned Randolph courses, enough to bring back a Professional Golfers’ Association golf tournament to Tucson.

An annual tournament could bring in between $15 million and $25 million to the economy, said Jose Rincon, the past president of the Conquistadores, in a three-page letter to City Manager Mike Ortega. The Conquistadores are a nonprofit that supports youth programs through golf events.

The goal is to have a new PGA-approved course operational by 2021, as the Conquistadores contract with a pharmaceutical company to hold its golf tournament — the Champions Tour Cologuard Classic at the OMNI Tucson National on the northwest side — ends in 2020.

“We would like to bring professional golf and its rich tradition back to the core of our City of Tucson,” Rincon wrote. “We strongly believe that a renovated golf course could serve as the crown jewel of golf in Tucson.”

No cost estimate was attached to the plan. Nor did the Conquistadores say if they would be willing to put up their own money as part of the redevelopment of the two courses.

The group lists the University of Arizona and Rio Nuevo Multipurpose taxing district as potential partners, but officials stress the proposal is in the earliest developmental stages and hasn’t been formally discussed with the Tucson City Council.

The city is evaluating the proposal, but it is unclear whether it would help or hinder Tucson’s efforts to address a major, long-term issue to keeping city courses open — how to pay for an estimated $20 million in much-needed capital improvements at the five city-owned courses. Ortega has scheduled a formal council discussion for May 22.

Ortega cautioned city officials are reviewing the proposal brought forward by the community group and it should not be taken as a sign that there is support to sell property along Broadway or to reduce the number of playable rounds of golf at Reid Park.

The Conquistadores, however, are optimistic that with a newly renovated golf course, the Arizona Wildcats’ golf teams could make Randolph their home course. Currently, the teams use Sewailo Golf Course at Casino Del Sol, which is about 9 miles from the UA campus.

The group’s proposal also calls for turning the Randolph Tennis Center in a “grade-A facility.”

With the UA’s baseball team already using Hi Corbett Field at Reid Park, the group imagines that sometime after 2021, the Wildcats could establish what the Conquistadores call a “UA sports hub” at Reid Park.

But at least one city councilman is skeptical that such a broad proposal could come together quickly, if at all.

“UA Athletics has five major capital projects going on right now valued at between $60 million and $70 million,” said Councilman Steve Kozachik, who also is the associate director of athletics facilities and capital projects at the University of Arizona.

And while he made it clear he wasn’t speaking for the UA, Kozachik said he’d be in the loop on any serious discussions related to new facilities.

“Nothing I’ve heard indicates that plowing another several million athletic department dollars into the renovation of Randolph Golf course is anything on our near-term priority list. Certainly not to meet the Conquistadores goal of 2021,” he said.

Additionally, Kozachik said the Conquistadores have to carefully balance the needs of professional golfers and the thousands of golfers who use the two 18-hole Reid Park courses every year.

“Everyone agrees seeing the PGA back in midtown would be a great thing, but not at all costs,” he said. “We have a $25 million capital need on the existing golf enterprise. Nobody seems to want to talk about how we fund that, much less the costs we’d take on if Randolph suddenly became a course we’d have to maintain to the level pros want.”

He also notes that the only real identified funding source for the project is the city of Tucson.

“The people who want this need to bring some serious cash to the table and quit setting dates that send a message this is farther along than just having seen some eye candy of what a new course would look like,” Kozachik said.

The 2018 Cologuard Classic Golf Tournament at the Omni Tucson National Resort features some the best senior golfers on tour.

Arizona has an enormous amount at stake: 47 percent of its exports go to Mexico and Canada and that trade supports 236,000 jobs in the state.

The skeletal remains of Roman Barreras were found in an abandoned toy chest in March 2014.

Nogales Police Officer Jesus Cordova was shot by a carjacking suspect in Nogales, Ariz. on April 27, 2018. Cordova died at a hospital in Nogal…

Some Tucson-run golf courses could close, be redeveloped in coming years

City officials see Silverbell golf course, which has been losing money for years, as the most likely to be closed in the near future.

It's a too-soon death for one of the region's proud, fun courses.

The Randolph North and Dell Urich golf courses can be seen is this aerial view in an undated photo. An unsolicited proposal from the Tucson Conquistadores suggests selling 15 acres along East Broadway to private developers to create a pro-level golf course.