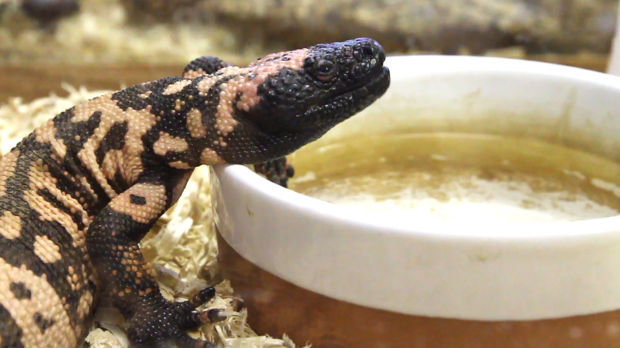 This Gila monster, named Ranger, has been fitted with a microchip to help nab reptile poachers. 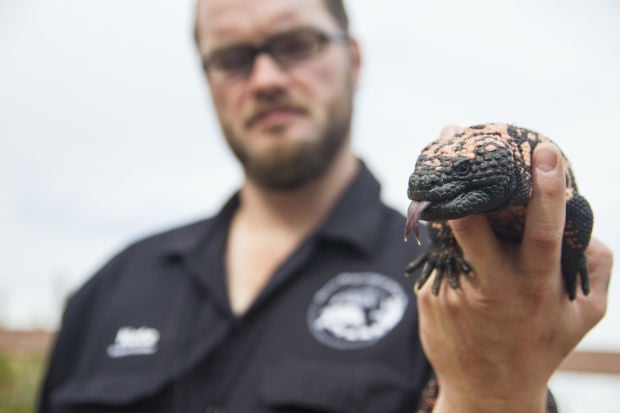 Nate Deason, venomous serpent curator at the Phoenix Herpetological Society, holds a Gila monster. The creatures, protected in Arizona, can fetch up to $1,500 apiece on the black market, experts say. 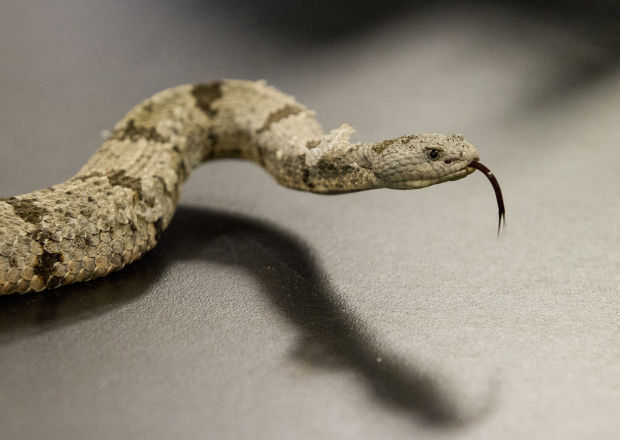 A banded rock rattlesnake kept at the Phoenix Herpetological Society. The species is one of five venomous reptiles protected in Arizona that are popular targets for poachers, officials say.

MESA – After monsoon rain, poachers are known to prowl desert roads looking for Gila monsters warming themselves on the asphalt. That’s where “Ranger” comes in.

“If someone pulls over and picks it up and takes it, that’s reasonable suspicion to make a stop and issue a citation,” said Tyler VanVleet, law enforcement coordinator for the Arizona Game and Fish Department’s regional office in Mesa.

A Gila monster, one of only two venomous lizards in the world, can fetch up to $1,500 on the black market, according to experts.

“They’ve come from Australia, Germany, other European countries, and from all over the U.S. to collect animals that can only be found in Arizona,” VanVleet said.

He said poachers often time their trips with monsoon season.

“All of that water hitting the ground gets the animals moving,” VanVleet said. “People will come to Arizona and start driving the roads at night, spotting reptiles with their headlights or flashlights.”

They come to Arizona because of the diversity of reptiles indigenous to the state, including 13 different species of rattlesnake, according to Nate Deason, venomous serpent curator at the Phoenix Herpetological Society.

Experts know there is quite a bit of illegal collection going on, but assessing the magnitude and damage to species is tricky, according to Dave Prival, co-founder of Southwestern Ecological Research Co. in Tucson. He has been monitoring a population of twin-spotted rattlesnakes in Southern Arizona for more than 15 years.

“It’s difficult assess the impact of reptile poaching on a statewide level because there is very little monitoring,” he said.

The Internet has made it easier for sellers to find buyers for protected species, but it also makes it easier for Game and Fish to find poachers, according to VanVleet. That’s how the agency discovered an out-of-state collector whose case is pending.

“He was listing protected animals as ‘Arizona species’ and putting them up for sale all over the world,” he said. “We watched him and waited for him to come to the state, and we caught him in the act.”

It’s not only people from beyond Arizona attempting to profit off the state’s reptiles. Over the past three years around eight Gila monsters have been sold in Tucson – either to reptile stores or on Craigslist, according to Gabriel Paz, law enforcement coordinator for Game and Fish’s regional office there.

“We bought several of them ourselves, and cited the individuals,” he said.

“You’ve got 50 states, and you’re going to have 50 different rules pertaining to reptiles,” he said. “Some states are very restrictive, and some states are wide open. It’s hard for us as an agency to prosecute someone in a state 2,000 miles away on the other side of the country.”

Prival said that combined with the effects of wildfires and climate change, poaching can wipe out a small population of snakes in an area.

“The old-timers always say that there used to be a lot more snakes than there are now,” he said. “When they go to some areas, they say, ‘I used to find snakes all over the place, and now I can’t find any.’”

VanVleet said Game and Fish is determined to keep reptile populations healthy and has officers on the lookout for telltale signs of poaching, including the tools poachers use.

“Someone wandering around with a snake hook or a pair of snake tongs, pillow cases, buckets in vehicles – that would send up a red flag for an officer,” he said.

Sophie and Tim Mason got so sick they nearly orphaned their four children.

This Gila monster, named Ranger, has been fitted with a microchip to help nab reptile poachers.

Nate Deason, venomous serpent curator at the Phoenix Herpetological Society, holds a Gila monster. The creatures, protected in Arizona, can fetch up to $1,500 apiece on the black market, experts say.

A banded rock rattlesnake kept at the Phoenix Herpetological Society. The species is one of five venomous reptiles protected in Arizona that are popular targets for poachers, officials say.