A teen was arrested Tuesday after they allegedly threatened via social media to shoot hundreds of students in the Sahuarita Unified School District, police said.

The teen is facing felony and misdemeanor charges of making terrorist threats, disruption of an educational institution and use of electronic device to threaten, according to the Sahuarita Police Department.

The incident was one of two separate social media threats made against multiple district schools over the past few days. Police believe another person is responsible for the other threat.

Sahuarita schools are closed on Tuesday "in an abundance of caution," the district wrote in a letter to families Monday afternoon.

Additional officers were assigned to Sahuarita High School, Walden Grove High School and Anza Trail School on Monday after a shooting threat was directed toward the three schools, according to the Sahuarita Police Department.

Around 4:30 p.m. Monday, a second threat was made to Sahuarita Middle School, prompting the Sahuarita Unified School District to cancel classes on Tuesday.

The Sahuarita district said all SUSD schools, including the Early Childhood Center and L.I.N.K. would be closed. High school after-school activities would be evaluated on a case-by-case basis, the letter said.

Also on Monday, Tucson police officers investigated a possible threat against Pueblo High School after a parent alerted them of a Snapchat post containing a threat.

Officers patrolled the area and additional school safety personnel were on campus as a precaution, according to an email sent to parents. 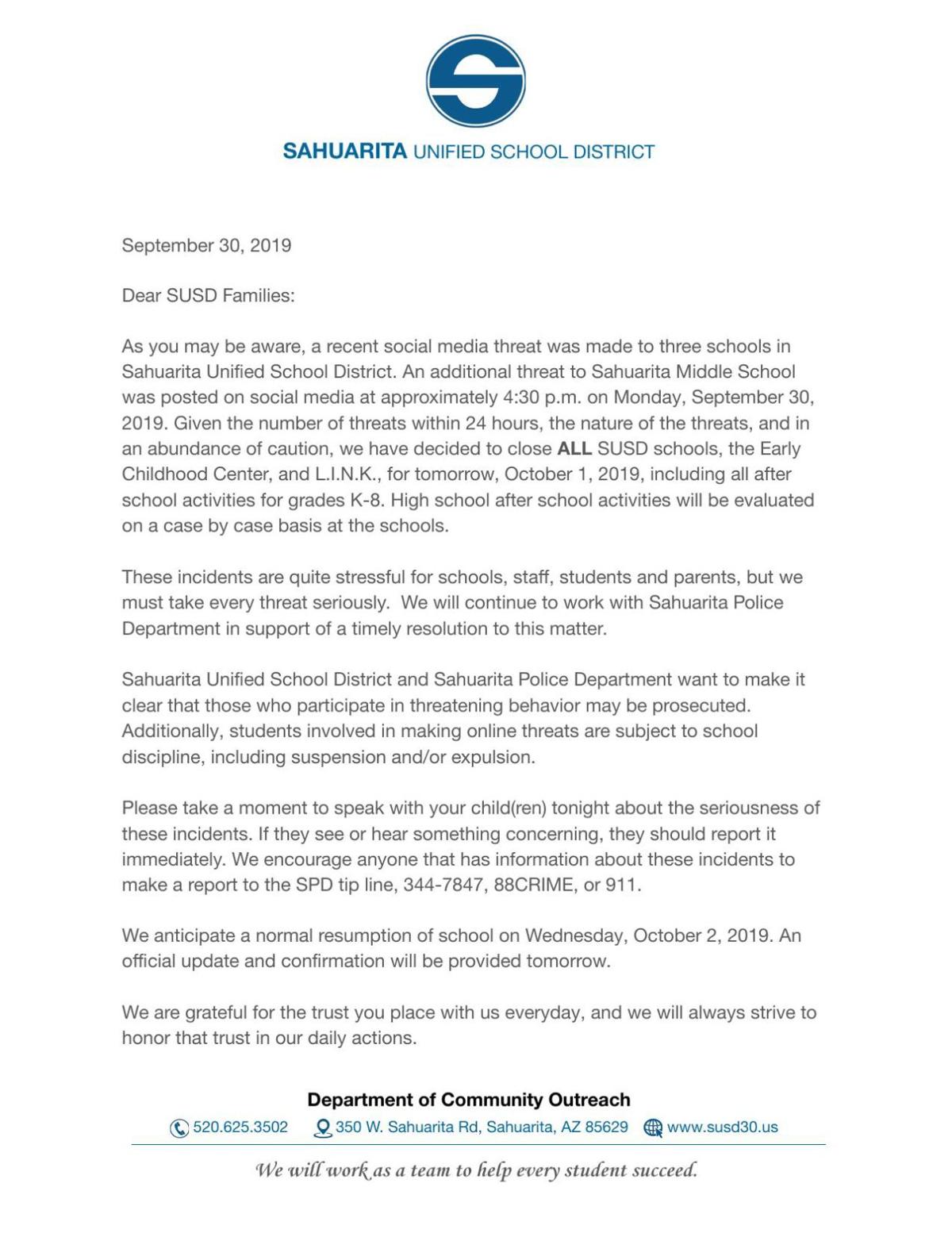 Triple Play, a family entertainment restaurant, is offering discounted $5 wristbands for unlimited play on Tuesday due to the Sahuarita school closures.

The establishment offers 18-hole mini golf, batting cages, an arcade and cornhole, according to the Triple Play website.

It is located at 1570 W. Duval Mine Rd., west of the Duval Mine Road and South La Cañada Drive intersection.

Matthew McConaughey will not run for governor of Texas

Matthew McConaughey will not run for governor of Texas

First step may be leasing 9-hole course back to development company HSL Properties.

It’ll take you about 700 feet high at its peak, but before heading up Tumamoc Hill visitors are likely to spend a chunk of time finding a plac…

Sewer work along The Chuck Huckelberry Loop on Tucson’s east side will affect pathway users near Broadway and Speedway starting Monday.

KXCI is expanding youth broadcasting camps to include fall break, this October.

Two people suffered life-threatening injuries and at least one person was transported to a hospital after a crash on Tucson's east side, offic…

Tucson man sentenced to natural life in prison for 2017 murder

A Tucson man found guilty of killing another man in 2017 was sentenced to natural life in prison Wednesday morning, an official said.

Tucson police detectives have identified the 83-year-old man killed Thursday morning when struck by a car along North 1st Avenue.

Pima County officials took in dozens of pets living in “deplorable” conditions at a home in Drexel Heights, officials said.

Tucson police arrested a man Monday after he allegedly fled the scene of a fatal crash late last month.