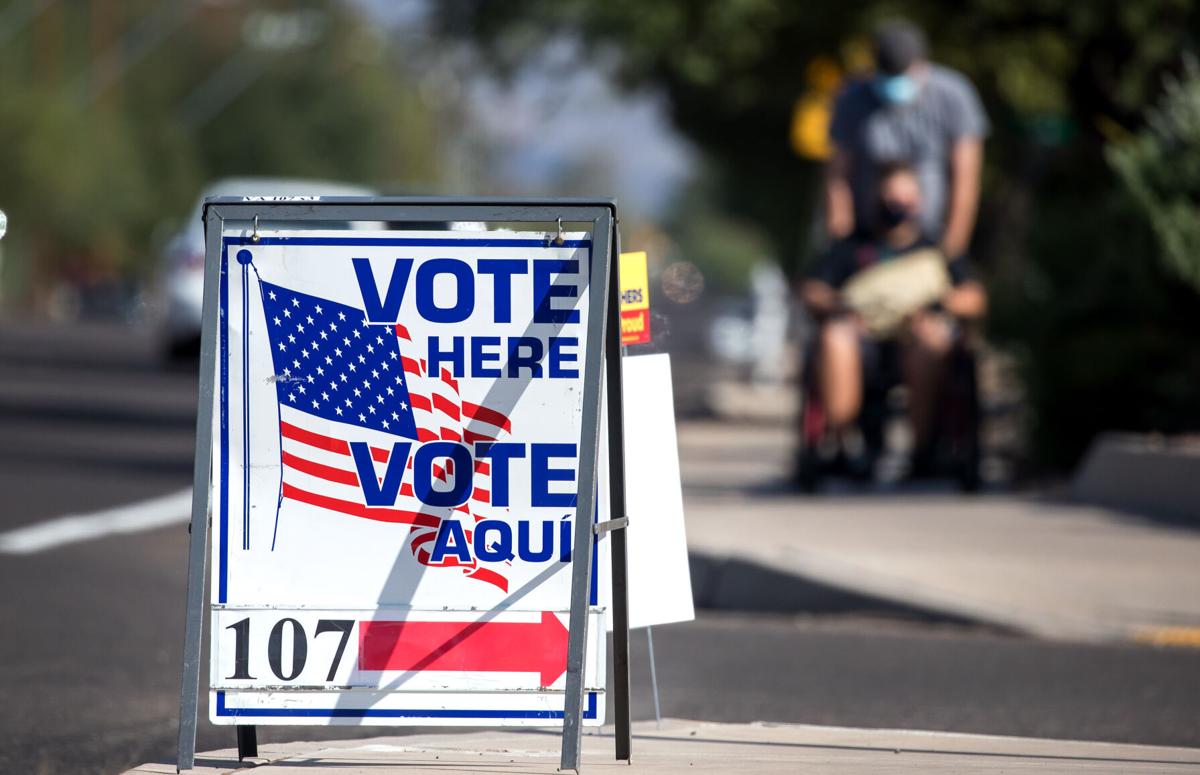 Tucson's Election Day is Tuesday. Voters will determine the future of two propositions — one that would raise salaries for city leaders and another that would increase the minimum wage — as well as the outcome of three city council races. 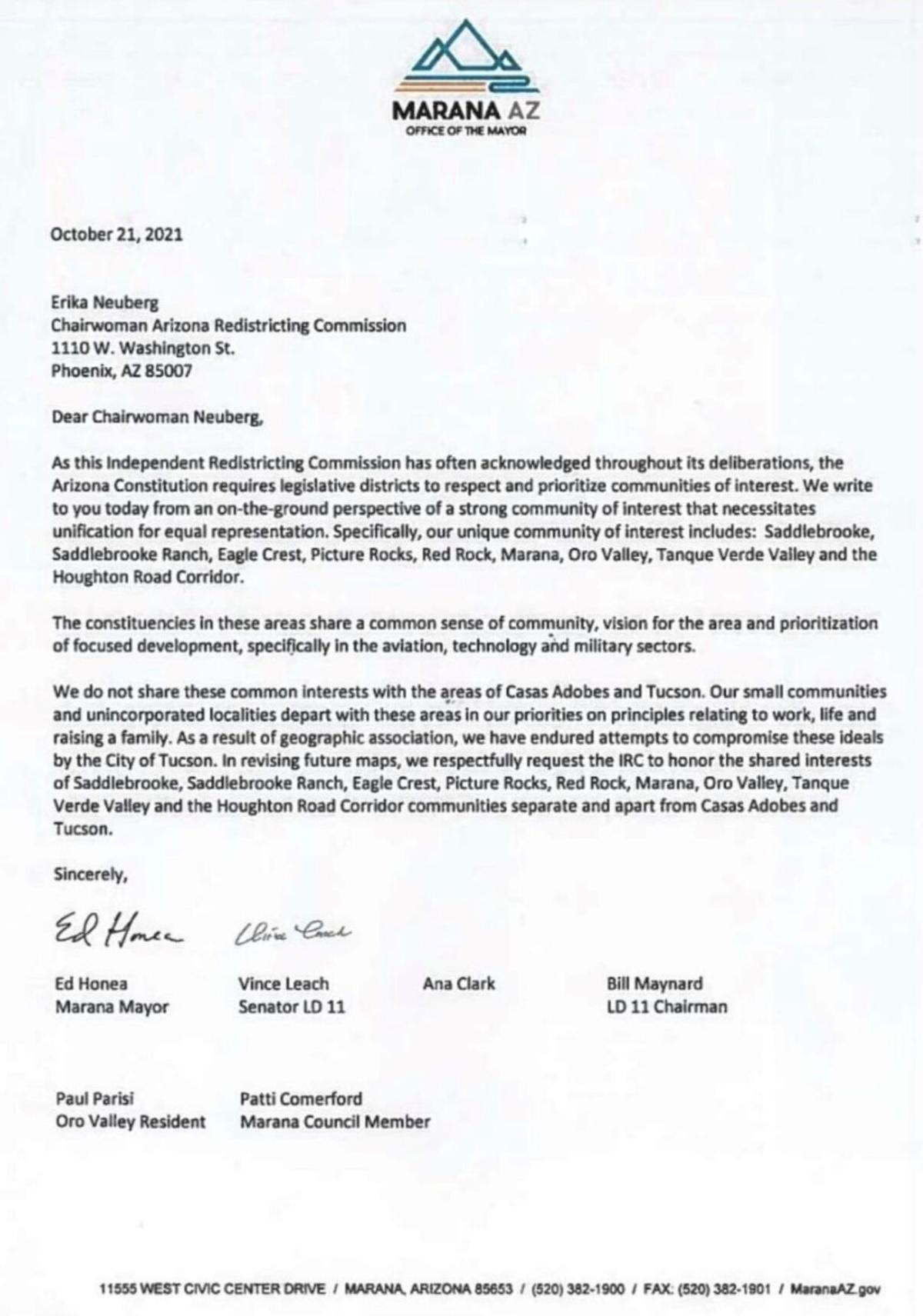 In this Oct. 21, 2021 letter, Marana Mayor Ed Honea, state Sen. Vince Leach and others insist that SaddleBrooke, Houghton Road, Tanque Verde, Picture Rocks and other places should be grouped into a legislative district, but that  Casas Adobes should be kept out. Casas Adobes has more Democrats.

Residents of Casas Adobes, the unincorporated area centered on Ina Road and Oracle, have reason to feel insulted after the redistricting discussions this week.

Arizona Independent Redistricting Commissioner David Mehl and others have made it very, very clear they don’t want Casas Adobes residents lumped into a district with their neighbors in Marana and Oro Valley.

In fact, the mayor of Marana, Ed Honea, sent a letter, signed by others including Sen. Vince Leach, insisting his town has much more in common with far-flung places like the Houghton Road Corridor than with nearby Casas Adobes.

In the letter, Honea and the others define their community of interest as SaddleBrooke, SaddleBrooke Ranch, Eagle Crest Picture Rocks, Red Rock, Marana, Oro Valley, Tanque Verde Valley and the Houghton Road Corridor.

It would take an hour to drive from SaddleBrooke Ranch to, say, the Safeway at the corner of Houghton and Broadway.

What goes unsaid, of course, is that the communities mentioned in the letter lean Republican, while Casas Adobes does not.

“Our small communities and unincorporated localities depart with these areas in our priorities on principles relating to work, life and raising a family,” the letter says.

Asked to elaborate by phone, Honea said there was “more of a small town feel” in the areas he’s referring to, with a lot of horse property and members of groups like 4-H and Future Farmers of America.

Curtis Lueck, co-chair of the project review subcommittee for the Regional Transportation Authority, is drawing scrutiny from council member Steve Kozachik for his effort to have shoppers boycott Tucson when making big purchases. Lueck’s boycott drive is in response to the increase in water rates that the city is scheduled to impose soon on residents of unincorporated areas of Pima County.

In his Oct. 25 newsletter, Kozachik called the move a “resistance point” and suggested that Lueck’s boycott illustrates the RTA’s bias against Tucson. The city is threatening to withdraw from the regional transportation plan if its long list of complaints isn’t addressed by Feb. 1.

“Last week I suggested to city leadership that Mr. Lueck should not be doing cost assessments of our projects and making recommendations on cost-shifting to Tucson residents,” Kozachik wrote. “If we’re going to participate in RTA Next, this is exactly the sort of activity their executive director should be monitoring and preventing.”

Lueck is a close associate of County Administrator Chuck Huckelberry and was present when Huckelberry was struck by a vehicle when riding his bicycle downtown on Oct. 23. Huckelberry, who suffered a serious head injury and several broken ribs in the crash, is an opponent of the city’s differential water rates plan.

“I think he’s stretching a point to an unbelievable level,” Leuck said Thursday about Kozachik. “There really is no relationship, to me, between the differential water rates and the RTA.”

Election Day in Tucson is Tuesday

Election Day is Tuesday for Tucson voters, who will determine the future of two propositions — one that would raise salaries for city leaders and another that would increase the minimum wage — as well as the outcome of three City Council races.

Some 63,616 early votes have already been returned to the City Clerk’s Office. That’s more than a fifth of the 284,150 ballots that were mailed to voters earlier this month.

Ballots that haven’t been cast need to be dropped off at a voting location. If they are mailed now, they are unlikely to be delivered by the 7 p.m. election night deadline.

The Tucson City Clerk Elections Center, 800 E. 12th St., will be the only voting location open before Election Day.

Replacement ballots will be available at several voting locations as well on Election Day. Voters who need a replacement will have to bring either one form of photo ID, like a driver’s license, or two forms of non-photo ID, such as a vehicle registration or insurance card.

Votes will be discarded if they aren’t received by officials by the 7 p.m. deadline on election night.

For Star subscribers: Gradually, especially in this traditional month of recognizing our ancestors and the deceased, many family members of those who died in the dark days from roughly March 2020 to March 2021 are finding ways to celebrate the lives of lost loved ones.

He will replace Councilwoman Karin Uhlich, who was tapped to replace Councilman Paul Durham earlier this year following his resignation. She did not run for a full term.

For Star subscribers: Linda Mendibles was a stalwart survivor on the streets south of Tucson's downtown. That she was killed in the spot where she often slept shocks and puzzles the people who knew her.

For Star subscribers: Katie Hobbs, the leading Democratic candidate for Arizona governor, played a key role in a racially and sexually discriminatory firing. If a Republican were in this position, Dems would be rightfully howling.

For Star subscribers: Tucson, once considered an affordable town, has turned expensive. But one of the first, incremental ideas to start flattening the housing curve has been delayed — and we can't afford delays.

Tucson's Election Day is Tuesday. Voters will determine the future of two propositions — one that would raise salaries for city leaders and another that would increase the minimum wage — as well as the outcome of three city council races.

In this Oct. 21, 2021 letter, Marana Mayor Ed Honea, state Sen. Vince Leach and others insist that SaddleBrooke, Houghton Road, Tanque Verde, Picture Rocks and other places should be grouped into a legislative district, but that  Casas Adobes should be kept out. Casas Adobes has more Democrats.