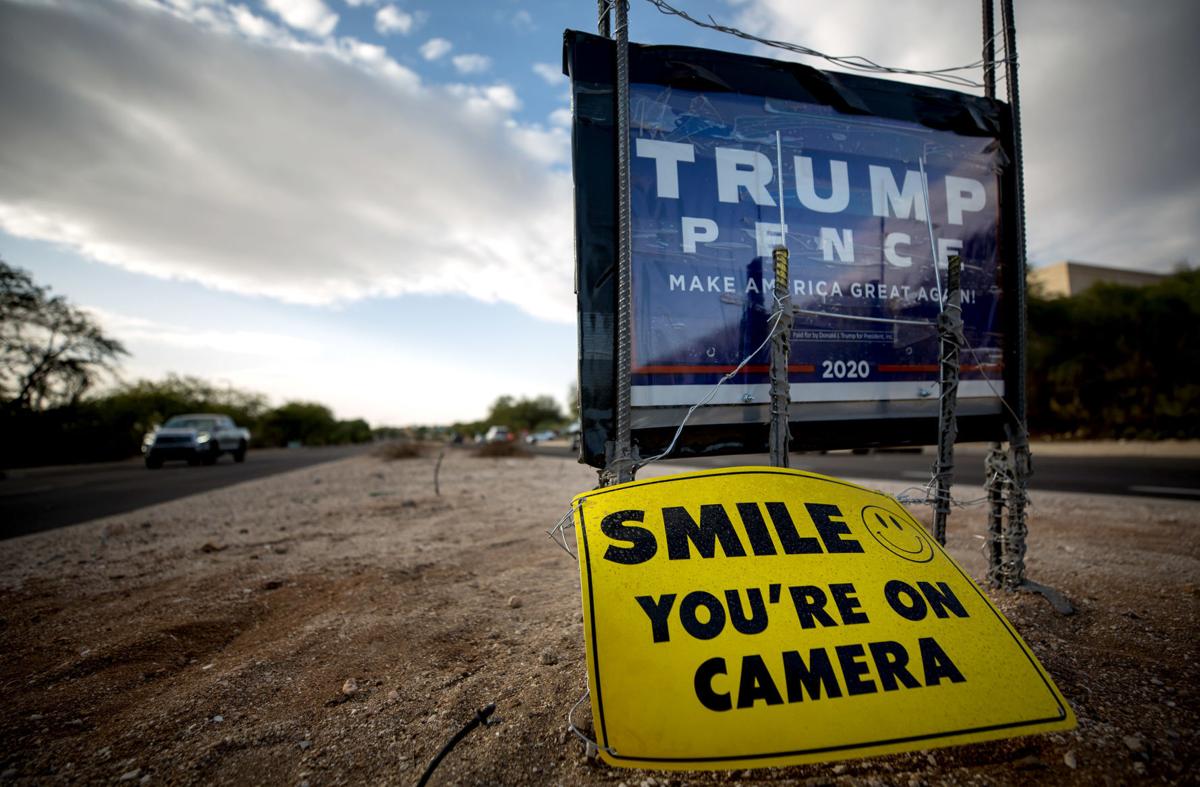 A political sign for the Trump-Pence campaign is covered with plexiglass and held in place with reinforcing bar and liquid cement along E. Sunrise Dr. between N. Swan Rd. and N. Campbell Rd. in Tucson, Ariz. on Oct. 26, 2020. It’s one of at least eight signs the have been “armored” on that stretch of road. A man who did not want to be identified told the photographer that “democrats and liberals” are leaving “booby traps” and damaging signs.

Sen. Martha McSally didn’t seem to get a very warm welcome from President Trump when she joined him in Goodyear on Wednesday for a campaign rally.

This is how Trump called her to the podium: “Martha, come up fast. Come on. Quick. You got one minute. One minute, Martha,” he said. “They don’t want to hear this, Martha. Come on. Let’s go.”

The apparent snub caught the attention of a few national political reporters. Arizona Republic opinion columnist Laurie Roberts also noticed it, writing later that it was “painful to watch as the president who dodged the draft treated the nation’s first female combat pilot with such disrespect.”

Trump was much nicer to the incumbent Republican at another campaign stop in Bullhead City earlier in the day. Though he didn’t call her up to speak, he introduced her there by saying she has done “a fantastic job in the Senate, and she’s respected by everyone there including me.”

Moments later, Trump turned to her and said, almost pleadingly, “Will you please win? You gotta win, OK?”

McSally posted a video on Twitter of Trump’s introduction in Bullhead City, and she thanked him for the kind words.

McSally otherwise scored a Buzz-worthy endorsement in the final days of her campaign against Democratic challenger and former astronaut Mark Kelly.

Apollo 11 lunar module pilot Edwin “Buzz” Aldrin threw his support behind McSally in a pair of Twitter posts on Oct. 24.

McSally responded with a tweet of her own, calling it an “absolute honor” to have the support of a hero like Aldrin.

The second man to walk on the moon became the fourth NASA veteran to endorse McSally over Kelly. Early this month, former astronauts Tom Stafford, Charlie Duke and Jack Lousma praised the incumbent and blasted her opponent and his party in an Arizona Republic op-ed.

Could this be a sign that Kelly has lost the backing of spaceflight veterans? Or does it simply mean that astronauts have their own partisan preferences, just like everyone else?

In Buzz’s case, he has endorsed a number of mostly right-leaning candidates in recent decades, including George W. Bush in 2004 and Texas Rep. Dan Crenshaw in 2018. Last year, he appeared at the State of the Union address as a guest of President Trump.

Aldrin’s Arizona Senate endorsement seemed to acknowledge something that political analysts have been saying for months now: McSally is trailing in the race.

In his tweets, Aldrin advised Kelly to check his “six” — pilot speak for the area directly behind him — and encouraged McSally to “wave” as she caught up and passed him.

Chris Taylor, a former Republican candidate for Arizona’s Congressional District 1 who dropped out of the race to seek treatment for drug abuse, has endorsed Democrat incumbent Tom O’Halleran in his race against Tiffany Shedd.

Taylor, a Safford city council member, Army veteran and volunteer firefighter, exited the race in February after experiencing a relapse in his heroin addiction. He has since endorsed a slew of Democrats, including Joe Biden, saying he is “completely rejecting the toxic cloud of Trumpism that has settled over our land like a deadly plague.”

“I know Tom to be a decent and honorable man, who is a constant example of civility and respect that seems to be in short supply these days. He represents our district in a thoughtful and bipartisan manner,” Taylor said in a statement. “He understands that AZ-1 is a diverse district, one that is filled with citizens, cities and towns of varying cultures and needs. He puts in the time to travel the district and listens to the concerns of constituents. He is one of the only sitting congressmen that I ever remember spending any amount of time in my small community of Safford. This shows how much he cares for people and not just about winning elections.”

Democratic Senate candidate Mark Kelly is going to court over a website's uncorroborated claims — which he denies — that he dressed up as Hitler for a 1985 Halloween party at the Merchant Marine Academy. Kelly's campaign furnished statements by classmates who back up his denial.

Young voters in Arizona showing up, advocacy group says, but Pima County numbers lag behind older voters who have turned in ballots so far.

A political sign for the Trump-Pence campaign is covered with plexiglass and held in place with reinforcing bar and liquid cement along E. Sunrise Dr. between N. Swan Rd. and N. Campbell Rd. in Tucson, Ariz. on Oct. 26, 2020. It’s one of at least eight signs the have been “armored” on that stretch of road. A man who did not want to be identified told the photographer that “democrats and liberals” are leaving “booby traps” and damaging signs.