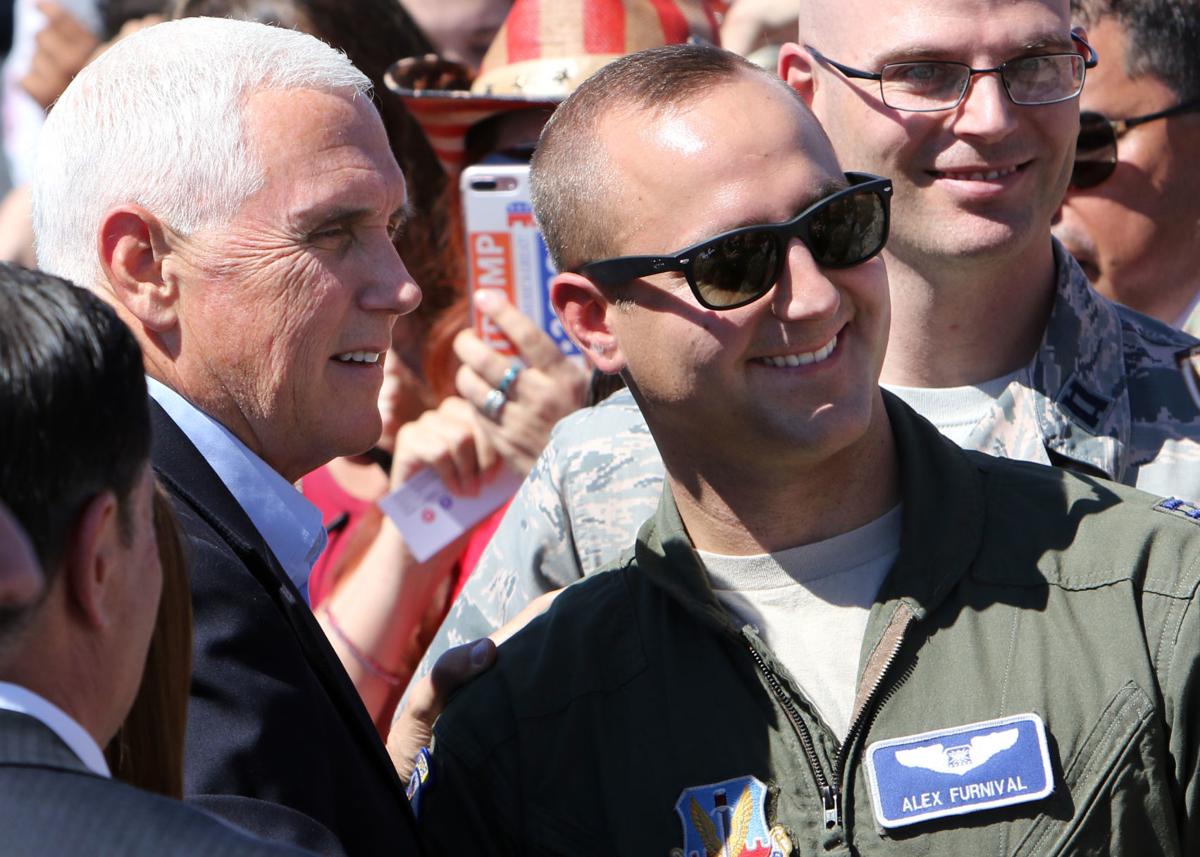 Vice President Mike Pence posed for a picture with a member of the Arizona Air National Guard at Tucson International Airport on Oct. 3, 2019. 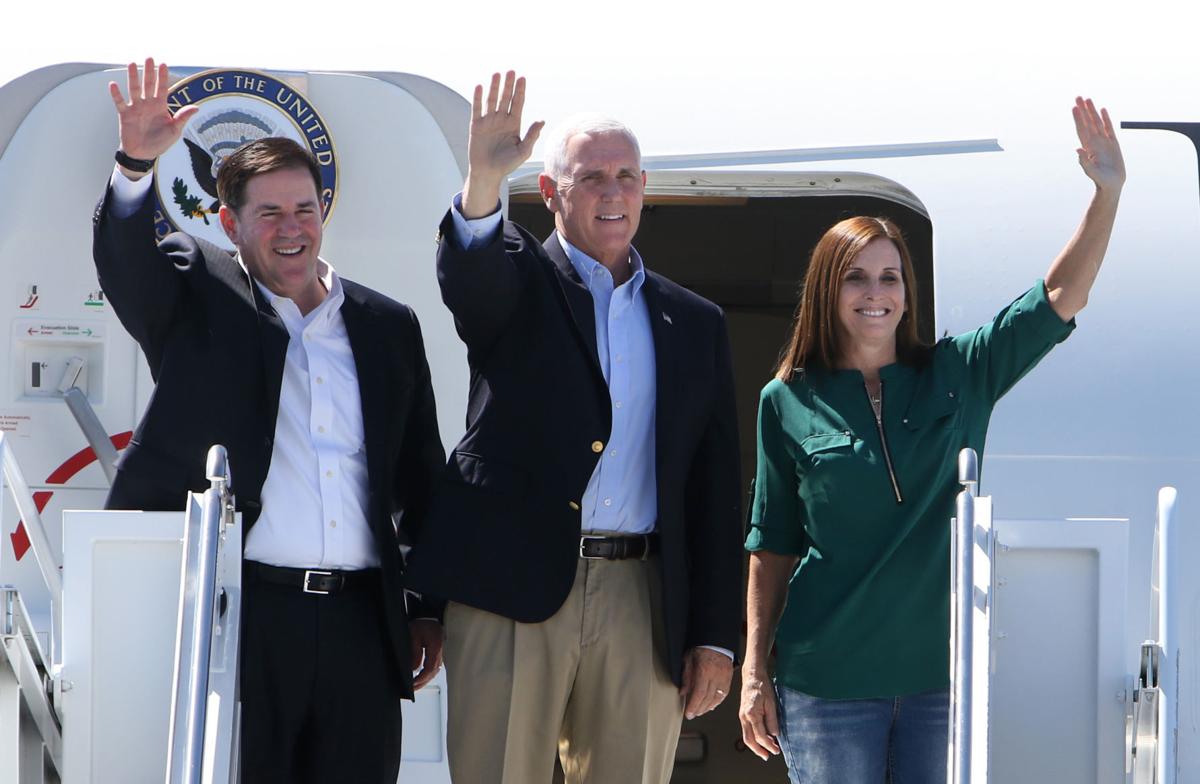 Or is that Tuscon?

The initial announcement of Pence’s visit included the common misspelling of the Old Pueblo’s name, but it was corrected in a later version.

Pence will speak at noon Tuesday at the Westin La Paloma. It is part of what the vice president’s team is calling the Faith in America Tour. Pence visited Wisconsin on Tuesday as part of the same tour.

Tickets are available online at www.donaldjtrump.com/events/. Those attending must arrive between 9:30 a.m. and 11:30 a.m.

Pence, who is leading the federal response to the coronavirus pandemic, will travel to Yuma after his Tucson stop. Yuma County has the fourth-highest rate of COVID-19 infections among the state’s 15 counties, behind Apache, Navajo and Santa Cruz counties.

A New York Times/Siena College poll released Thursday found that in Arizona, Democrat Joe Biden has a seven-point lead over President Trump, 48%-41%. A weighted average of polls calculated by the political website fivethirtyeight.com put Biden’s lead over Trump at 47.5% to 42.7%, a 4.8 percentage point margin.

In the 2016 presidential election, Trump beat Hillary Clinton in Arizona by 3.5 percentage points.

Many people consider protesting at an officeholder’s home to be crossing a line — one that separates public officials’ private lives from their public ones.

Congressional candidate Joseph Morgan does not.

When word started circulating last week that people planned to picket Tucson Mayor Regina Romero’s house over her mandate to wear masks due to the surge in COVID-19 cases, Morgan promoted the protest idea on Facebook. Then, Saturday evening, he joined the dozens of people who showed up outside Romero’s west-side house.

“I don’t see it as a line that’s not to be crossed,” Morgan said Thursday. “We’re public servants.”

Morgan, who is running for the GOP congressional nomination in District 2, said he read the law and spoke to police before going. He justified the demonstration by saying that in the pandemic period, Romero has been largely working from her home, not at places where she could be picketed, and that the protest did not have the “intent to harass, annoy or alarm” that would make it a misdemeanor.

Eric Ruden, who is running for the same GOP nomination as Morgan, opposed the idea of residential protests, saying via email: “Confronting individuals in a residential neighborhood, at a neutral place of employment, or in venues such as restaurants to push a political message feels more like bullying than activism to me.”

The third GOP candidate, Brandon Martin, did not return an email seeking comment.

In the end, the protest was small and uneventful. Romero’s husband, Ruben Reyes, played loud music to the protesters by musicians such as Bob Marley, Ramon Ayala and Public Enemy.

Lane Santa Cruz has taken the lead among Tucson City Council members in condemning the police department for its role in the in-custody death of Carlos Adrian Ingram-Lopez and for keeping his death quiet.

On Facebook Tuesday morning, Santa Cruz was the first official to publicly comment on the death, and she described it as the “death of one of our community members at the hands of Tucson police officers.” She also called it “This horrible incident of police violence.”

Her aide, Andres Alexander Portela, went further on Facebook, saying, “While you’re attacking the mayor and council members, remember tpd hid a murder from you for 2 months.”

The comments upset the Tucson Police Officers Association, the union representing most of the police force, which argued that no force was used in the incident, and that it certainly wasn’t a murder. The autopsy concluded Ingram-Lopez died of cardiac arrest, with acute cocaine intoxication and physical restraint contributing, along with an enlarged heart.

“The video released (Wednesday) shows absolutely no police use of force or any violence at all, but rather the tragic death of a man due to cardiac arrest, caused by an extremely high level of cocaine in the individual’s system.

“Everything Santa Cruz and her staff have told you about this incident is untrue,” the officers association said in a written post. “Her statements add trauma, not based in fact, to an incident which is already traumatic.”

In response, Santa Cruz pointed out that the police union’s own statement was misleading, because it omitted the fact that the officers’ “physical restraint” was listed as a factor in Ingram-Lopez’s death. She objected to them “vilifying” Ingram-Lopez for his cocaine use.

A former Tucson resident pleaded guilty this month to one count of attempted illegal voting after voting twice in the 2016 General Election.

Randy Allen Jumper, 62, who now lives in Nevada, was indicted in July 2019 after voting in both Pima County and Washoe County in Nevada during the same election.

He did not register with a political party in either county.

However, until 2014, he was registered as a Republican in Pima County.

The plea agreement, which was signed June 15, requires Jumper to pay a fine of $5,000, plus court-ordered fees and surcharges.

His right to vote in the state of Arizona has been revoked and he will not be allowed to re-register while he is on probation.

To contact the authors: Tim Steller is at tsteller@tucson.com or 807-7789; Jasmine Demers is at jdemers@tucson.com.

Several hundred people gathered for a community vigil on June 25, 2020, for Carlos "Adrian" Ingram Lopez, who died in Tucson Police custody in…

WATCH NOW: From the Star's cartoonist: 'We're Tucson. We got this'

"We're tough as saguaros," editorial cartoonist David Fitzsimmons says. He says he saw a video made for the people of Detroit and became inspi…

Mayor Regina Romero also said Thursday that she did not support the resignation offer of Chief Chris Magnus.

Tucson police for first time made public video that showed Carlos Ingram-Lopez, 27, pleading for water, groaning while handcuffed on ground during April 21 incident.

Across Pima County, 6,836 cases of coronavirus have now been confirmed, up 290 cases from the day before.

Vice President Mike Pence will be traveling to Tucson next week to accept the endorsement of the Arizona Police Association, which offered its…

Vice President Mike Pence posed for a picture with a member of the Arizona Air National Guard at Tucson International Airport on Oct. 3, 2019.