Maybe the grass isn’t always greener in Armory Park, but the potholes certainly are.

The illicit landscaping appeared in early January, much to the delight of some nearby residents. They assumed it was a protest aimed at drawing the city’s attention to all the road damage in their historic neighborhood south of downtown.

“I’ve never seen them fix a single (pothole). They just keep getting bigger and bigger,” said Jackie Lanni, who paused to admire the small patches of grass as she walked her dogs.

The holes are especially bad on Fifth Avenue, she said, and there’s one on 21st Street that’s “big enough to bathe a small child in.”

“You can’t miss it, especially with your car,” Lanni said.

Peaceful pothole protests have become a viral sensation in recent years, with residents around the world highlighting the holes in their streets by posing dolls in them, pretending they’re bathtubs or turning them into planters for flowers and Christmas trees.

Last year, graffiti artists in Middlesbrough, England shamed authorities into fixing their potholes by spray-painting the pavement around them with giant penises.

The patches of fake grass in Armory Park seem downright tame by comparison. Plus you can still drive over them without damaging your car.

City spokesman Andy Squire laughed when he heard about the guerrilla art project.

“That is both hilarious and painful simultaneously,” he said, before referring all questions to the Tucson Department of Transportation.

Last year, the department fixed 60,000 of them, but Graham said the problem is so big that crews have to prioritize the hazards that pose the greatest safety risk. They also rely on the public’s help to find out about potholes, missing signs and other issues.

“We’re in reactive mode,” Graham said. “We encourage people to call us and let us know. If we don’t know about it, we can’t fix it.”

Right now, the city has four pending service requests in the Armory Park neighborhood, including one made Jan. 9 for potholes at Fourth and 16th.

Noah Silbercoats lives just down the street from the grassy holes. He is not sure the roads in Armory Park are any worse than anywhere else.

“It’s Tucson. There are potholes,” he said.

Silbercoats also isn’t convinced that the fake grass was meant as a protest. He said he knows the artist who did it, and he believes her motivations were “a little more nuanced than that.”

As it turns out, Silbercoats is right.

The holes were landscaped by Armory Park resident artist Janet Miller, but not out of anger and frustration.

“My friend Elizabeth Garber and I greened up the potholes just for the fun of it,” Miller explained in an email.

She said she scavenged the fake grass from someone’s curbside trash pile on the city’s “Brush and Bulky” pickup day.

She tested out her idea on a single hole on Fifth Avenue in October. When that patch of turf was still there in early January, she and her friend decided to fill in the ones at Fourth and 16th, in front of the OK Market that Miller also helped decorate.

Call it an act of unsanctioned street beautification by an Armory Park resident who has even learned to see the silver lining in suspension-rattling pits in the pavement.

“I used to be irritated by the city ignoring the potholes in the neighborhood, until I realized they actually slow traffic down,” Miller said. “So I celebrate them now.”

If you live in the city of Tucson, you can report a pothole or any other road-related issue to the transportation department by calling 791-3154 or sending an email to tdotconcerns@tucsonaz.gov.

Graham said the city doesn't want members of the public out in the middle of the street, risking their lives to fill in their own neighborhood potholes with sand, mark them with paint or -- in at least one case -- turn them into art projects.

The owners of the giant T. rex in front of the McDonald's at Tanque Verde and Grant in Tucson say the statue isn’t going anywhere, despite a post targeting it on the Facebook page of a group called Christians Against Dinosaurs. 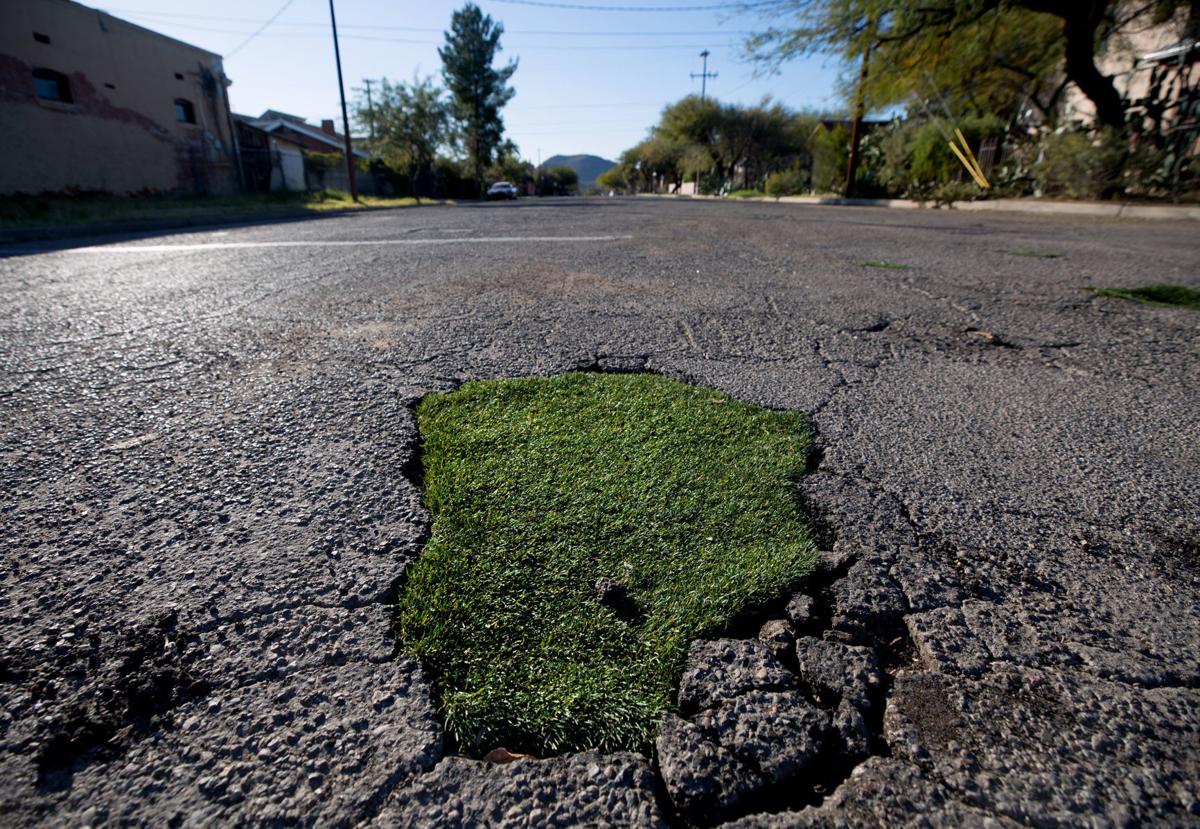 Janet Miller, a resident in the Armory Park Neighborhood, and friend Elizabeth Garber filled in several potholes with fake grass at Fourth Avenue and 16th Street not out of anger and frustration, but “just for the fun of it.” 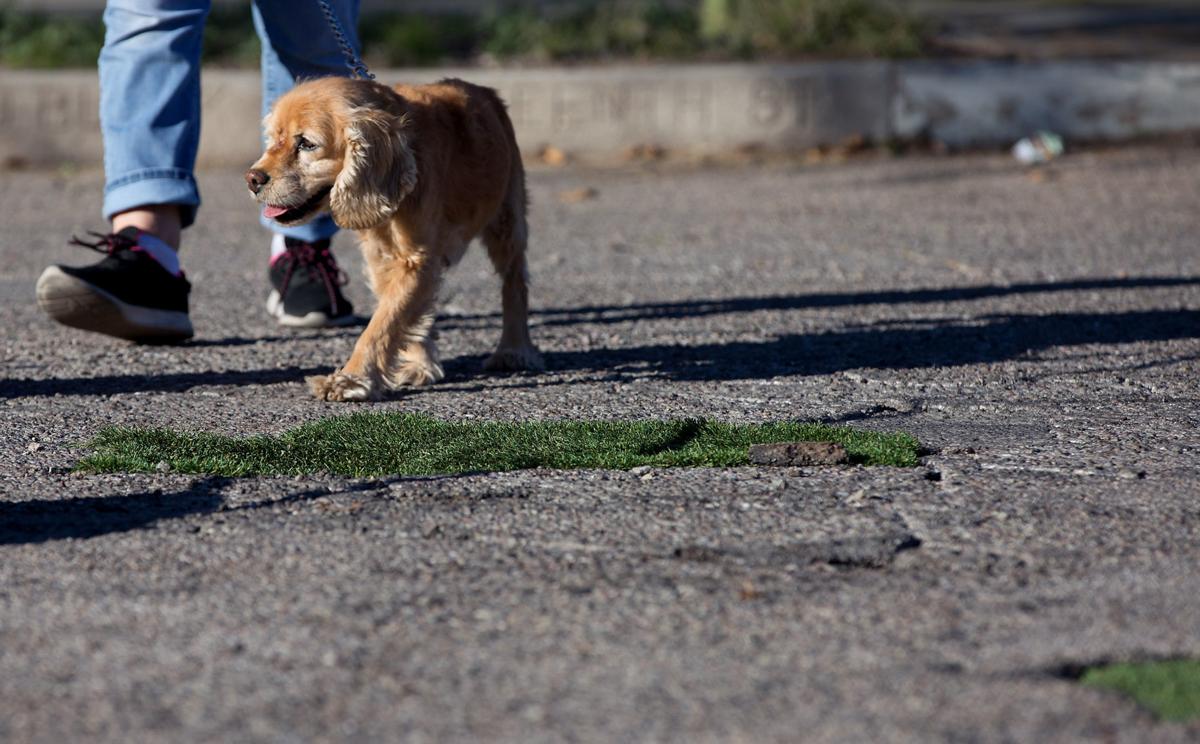 A dog and its owner walk past potholes at Fourth Avenue and 16th Street that were filled in with turf by Janet Miller, a resident in the Armory Park Neighborhood, and friend Elizabeth Garber.