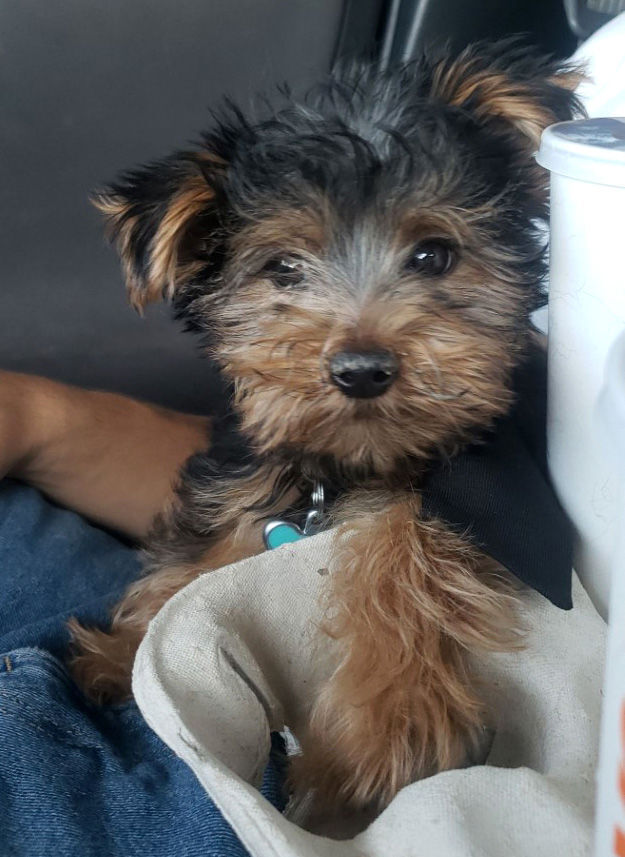 Yappy, a Yorkshire terrier purchased from Puppy World. The store has closed without notice, and the holder of its business license has not responded to a reporter’s messages. 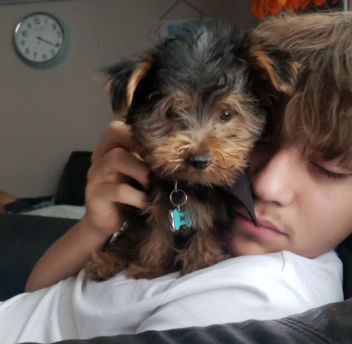 Xavier Hernandez, 16, cradles a Yorkshire terrier named Yappy the day his parents brought it home from Puppy World in Marana. An autopsy showed Yappy had only one lung.

A Tucson area pet store accused of selling puppies bred under abusive conditions has closed four months after it opened amid claims it sold a sick animal with one lung that died within a month of purchase.

The tiny Yorkshire terrier pup, purchased Oct. 4 from Puppy World at Tucson Premium Outlets in Marana, cost $2,700 to purchase, plus another $1,500 in veterinary bills for what was supposed to be a healthy, vet-checked specimen with a 12-month guarantee against genetic defects, the buyer’s paperwork shows.

But the man behind the guarantee was nowhere to be found when Alyssa Madril went back to the store last weekend to confront the management about fate of the 12-week-old male Yorkie her family named Yappy, who died Nov.3.

The glass storefront of Puppy World was covered over with brown paper, with no information left behind to let customers know what happened.

Madril, 39, of Phoenix, said her family is heartbroken, and she’s preparing a complaint to the Arizona attorney general’s consumer fraud division.

“My heart hurts for my puppy, to not have him for even a month, to have stayed up late at night caring for him and watching him suffer,” she said in an email interview of the pooch.

“Then not seeing him at the end … then to hear he passed away and getting his ashes. My heart broke. It’s been a tough time for me and my family.”

The business license for Puppy World is registered to a 23-year old California man, Rickie Gallardo, who promotes get-rich-quick videos online and advertises them by posing with photos of luxury cars and stacks of $100 bills.

Gallardo previously ran a Puppy World store in his home state but relocated to Arizona soon after he was named a defendant in a federal lawsuit that accuses him of procuring his puppies from puppy mills.

This cute labradoodle has gotten pretty good at creating beautiful pieces of abstract expressionism, thanks to her owner and dog trainer Himal…

Gallardo denied wrongdoing in an interview in August with the Arizona Daily Star.

Animal welfare groups say puppy mills churn out product at high speed by sacrificing the health of mother dogs, who are kept in cramped cages and bred every heat cycle to produce as many offspring as possible in the shortest time possible.

Gallardo did not respond to requests for comment for this story including a voicemail, a text message and two emails over a three-day period this week.

Madril said she has family members in Tucson and visits often, sometime stopping at the outlet mall on the way home. Though her household already has several rescue dogs, she stopped by Puppy World and “fell in love,” with the 3-month-old Yorkie, she said.

Mardril’s sales contract offered a 12-month guarantee against genetic defects that lead to the death of a puppy.

Under the terms, she was to receive a $2,700 credit, her purchase price, toward the purchase of another puppy.

Meanwhile, a Tucson-based animal welfare group that protested against Puppy World on the sidewalks around the Marana outlet mall is claiming credit for forcing the pet store to close four months after it opened in early August.

“At the very site where Rickie Gallardo briefly exploited mill-bred animals for profit, Tucson’s animal activist community now celebrates his removal,” said a news release from SPEAK, an acronym for Supporting and Promoting Ethics for the Animal Kingdom.

31 popular dogs that should stay inside this winter

Not all breeds are designed to pull sleds around the Alaskan tundra all winter.

OPINION: Our latest contributor says Arizona has looked the other way when it comes to puppy mills, and the animals are the ones who suffer. "Arizonans must be vigilant where politicians have failed. We must speak up when others cannot," he says.

Suspect is recovering from his wounds at Tucson hospital.

Police say vehicle went up onto sidewalk and struck two women. One died at scene, other was taken to hospital in serious condition.

Alcohol may have been a factor in the crash, police say.

Yappy, a Yorkshire terrier purchased from Puppy World. The store has closed without notice, and the holder of its business license has not responded to a reporter’s messages.

Xavier Hernandez, 16, cradles a Yorkshire terrier named Yappy the day his parents brought it home from Puppy World in Marana. An autopsy showed Yappy had only one lung.