Rare plant found near Tucson, Sierra Vista to be added to endangered species list
Share this
1 of 2 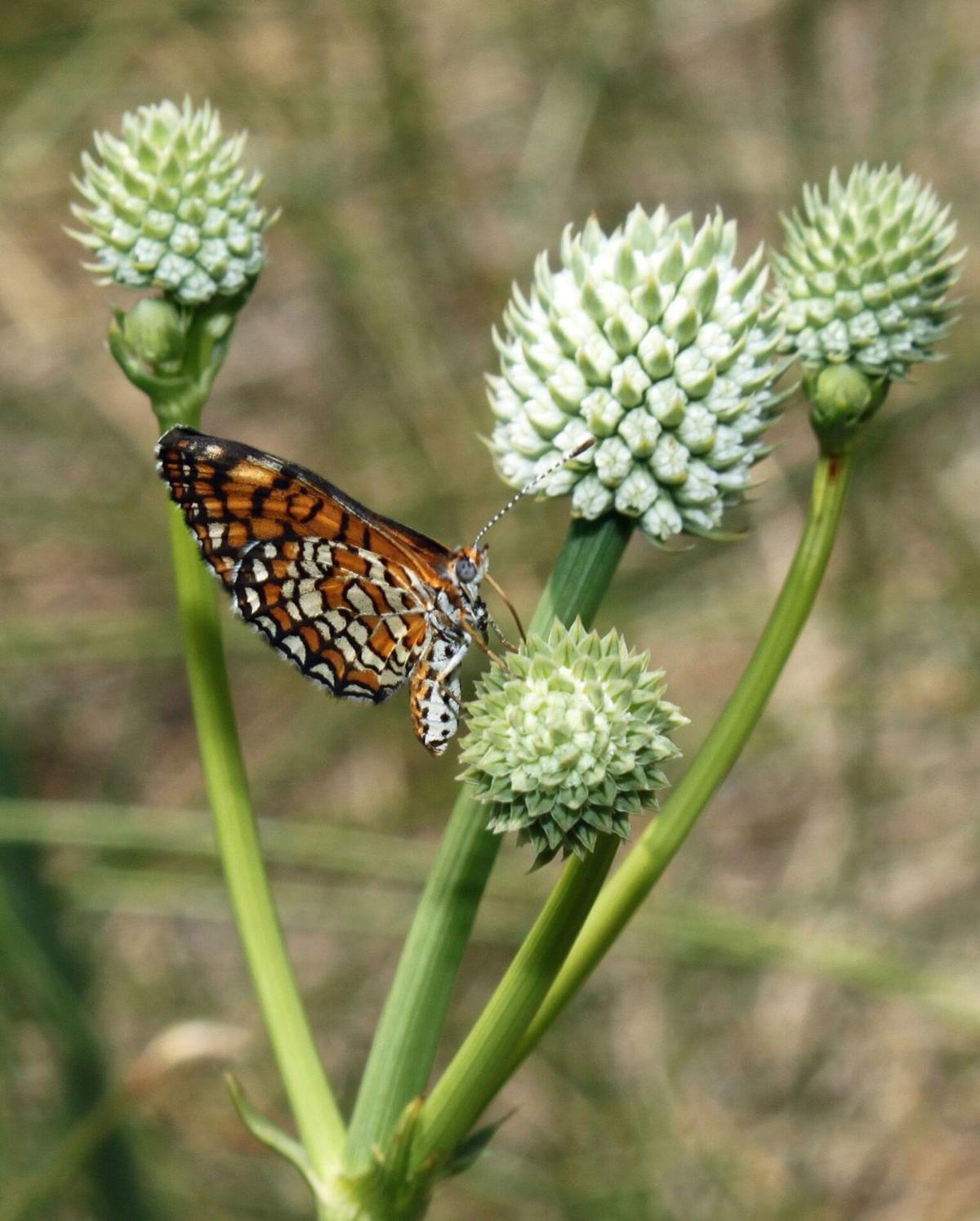 A butterfly settles on the flower of an Arizona eryngo, a rare member of the carrot family that will soon be added to the federal endangered-species list. 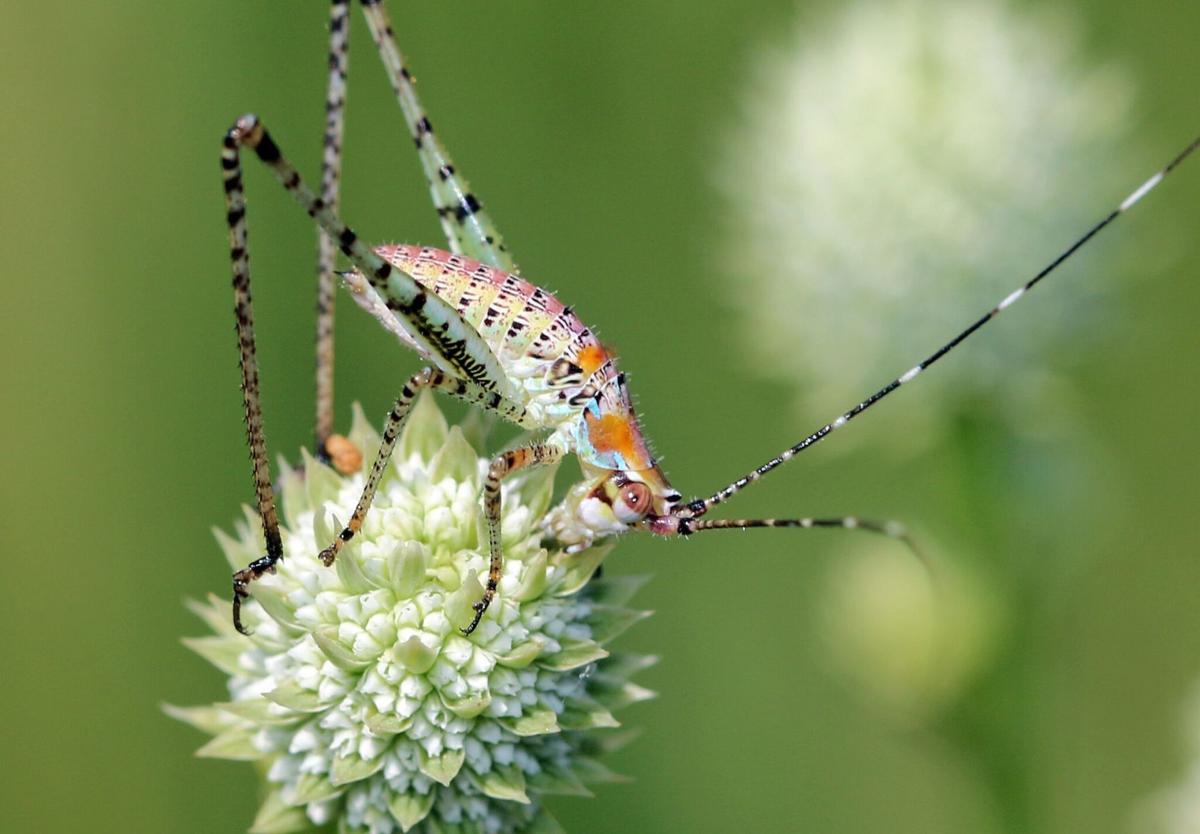 A katydid perches on an Arizona eryngo, also known as a ribbonleaf button snakeroot. The plant is found only in small patches in Southern Arizona and northern Mexico.

A rare wetland plant with spiky, white spheres for flowers is about to become Southern Arizona’s newest endangered species.

The U.S. Fish and Wildlife Service announced plans on Thursday to add the Arizona eryngo to the list of federally protected species and set aside three small patches of critical habitat near Sierra Vista and on Tucson’s east side.

Conservationists hope the listing will lead to a broader effort to bring back the once-verdant cienegas where the plant is found, starting with the groundwater that sustains them.

Noah Greenwald is the endangered-species director for the Tucson-based Center for Biological Diversity, which petitioned for the eryngo to be listed in 2018 and then sued the Interior Department to force action on its filing.

“It is a really striking plant,” Greenwald said. “It was a conspicuous and beautiful part of the Western landscape that’s been largely lost.”

Greenwald said roughly 95% of spring-fed cienega habitat in the Southwest has been destroyed by groundwater pumping and other human development. The eryngo is also threatened by an invasion of nonnative plants and woody vegetation resulting from warmer and drier conditions brought on by climate change.

The plant is a member of the carrot family that can grow up to 5 feet tall. Also known as ribbonleaf button snakeroot, it is native to Arizona, New Mexico and parts of Northern Mexico.

Only four populations remain, two in Southern Arizona and two in Mexico, though efforts are underway to reestablish the plant elsewhere, including at the historic Canoa Ranch south of Green Valley.

The Fish and Wildlife Service proposal would designate a total of 13 acres in three locations as critical habitat for the plant.

Two of the sites are on the east side of Tucson: 3.1 acres along the Tanque Verde Wash in La Cebadilla Estates off of Redington Road, and about one-third of an acre at Agua Caliente Park at Soldier Trail and Roger Road.

The remaining critical habitat is on 9.6 acres at Lewis Springs in the San Pedro Riparian National Conservation Area east of Sierra Vista.

“Critical habitat helps focus conservation efforts where they are needed most,” said Amy Lueders, regional director for the service in a written statement. “If finalized, this rule would help us conserve the Arizona eryngo, and the ecosystem on which it depends for future generations.”

Greenwald said his organization was hoping for “something a little more ambitious than 13 acres,” which probably isn’t enough habitat to ensure the plant’s survival.

But he said such limited action is typical of a federal agency that has been “beaten down by politics.”

Arizona eryngo is not just some pretty plant, Greenwald said. It’s another potential victim of an ongoing worldwide extinction crisis that’s being fueled by human activity.

It’s not enough to simply set aside the last few patches of ground where the imperiled plant clings to life. Greenwald said the eryngo’s native habitat is important to a lot of other species as well, and it must be restored and protected as much as possible.

If nothing else, he said, this listing “highlights the need for better planning and water management” across the region.

The Fish and Wildlife Service is now collecting public input on the proposed listing and critical habitat designation. Comments will be accepted until May 3.

Information on how to submit comments is available at regulations.gov by searching under docket number FWS-R2-ES-2020-0130.

Copies of the proposed listing are available online at: https://www.fws.gov/southwest/es/arizona/Eryngo.htm

Psaki: 'There will be more' omicron variant cases

Psaki: 'There will be more' omicron variant cases

Arizona hunters would no longer be allowed to use motion-activated trail cameras to stalk game under a new rule proposed by state wildlife regulators.

Former Arizona Daily Star reporter Doug Kreutz enjoyed sharing the outdoors with readers before his retirement. Here are some of his saguaro videos.

Feel nostalgic for some Tucson institutions that are gone forever.

Watch: Javelinas — including a baby — roam in Green Valley

An Arizona Daily Star reporter spotted this squadron of javelinas, including a baby, roaming in Green Valley last week.

A Tucson-based environmental group is accusing the BLM of violating the Endangered Species Act by failing to keep errant cattle out of the San Pedro Riparian National Conservation Area.

An endangered plant has all but disappeared from the San Pedro Riparian National Conservation Area, according to a Tucson-based environmental …

A butterfly settles on the flower of an Arizona eryngo, a rare member of the carrot family that will soon be added to the federal endangered-species list.

A katydid perches on an Arizona eryngo, also known as a ribbonleaf button snakeroot. The plant is found only in small patches in Southern Arizona and northern Mexico.