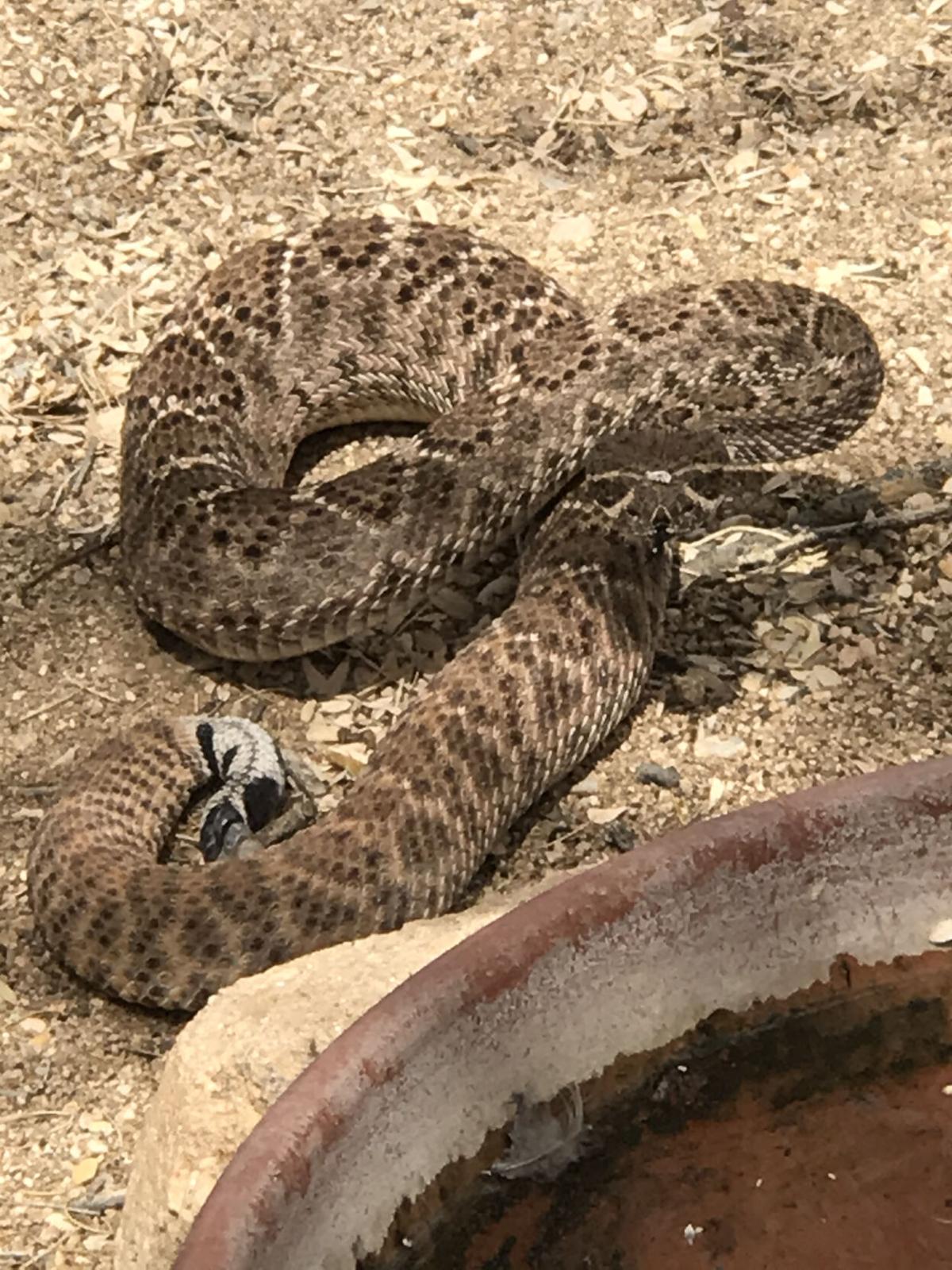 A western diamondback rattlesnake coils defensively after nearly biting an Arizona Daily Star reporter on May 1 in the backyard of a home in Northwest Tucson. 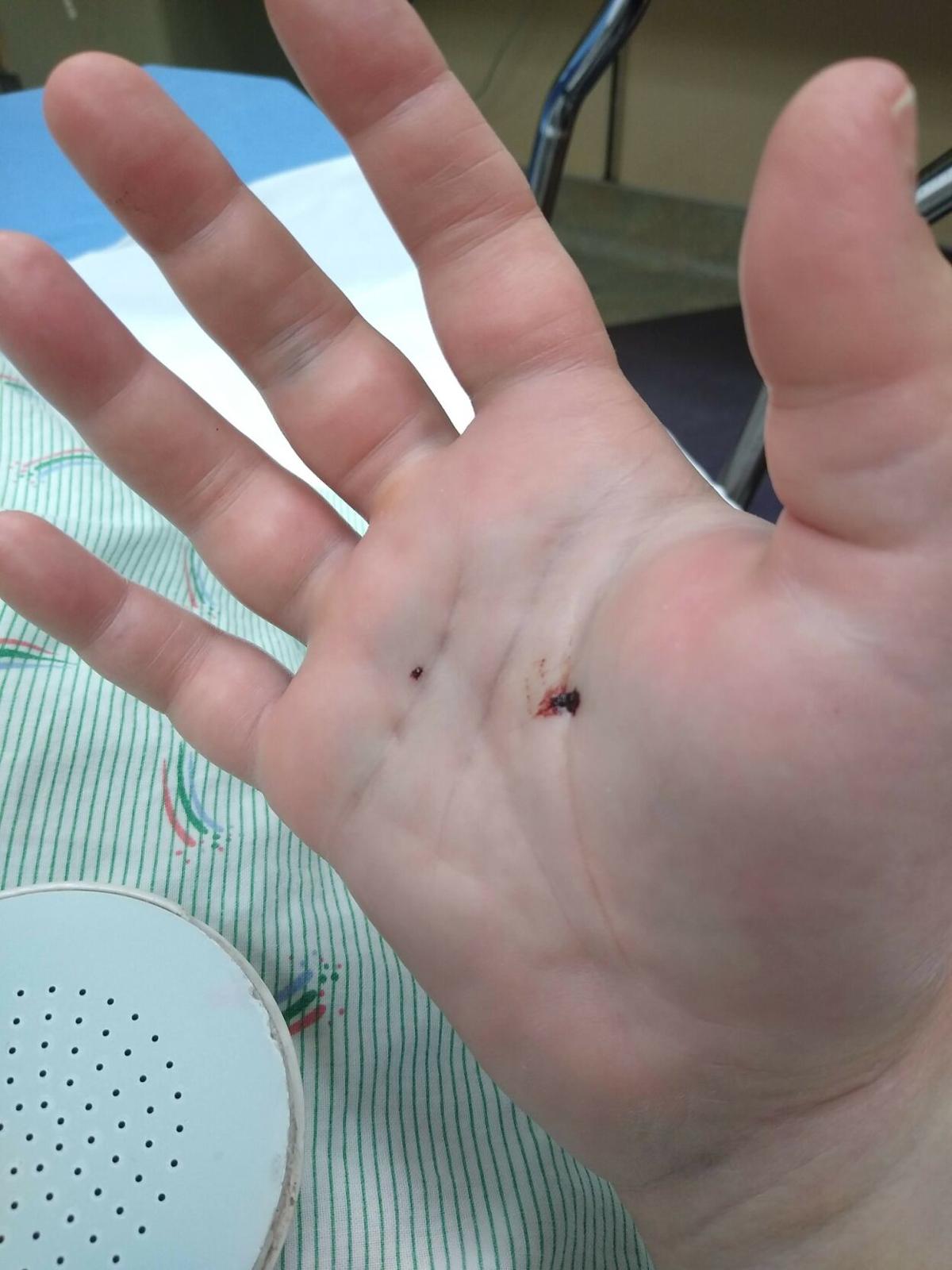 Two puncture wounds mark Celia Cartwright's right palm where a rattlesnake bit her on Sept. 14 in the yard of her condo near Swan Road and Sunrise Drive. 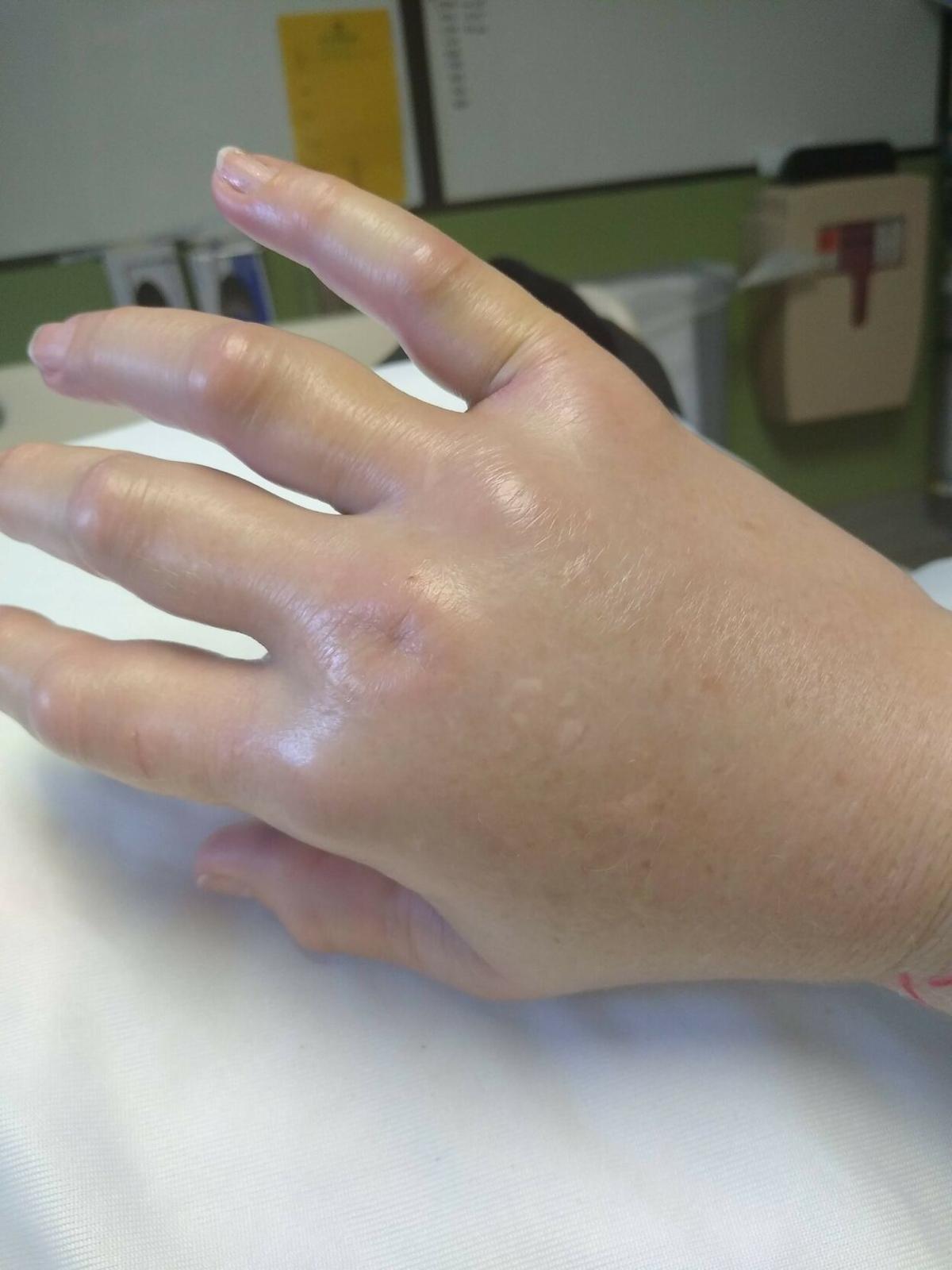 Celia Cartwright's hand swelled significantly during her three-day stay at Tucson Medical Center after she was bitten by a rattlesnake on Sept. 14. 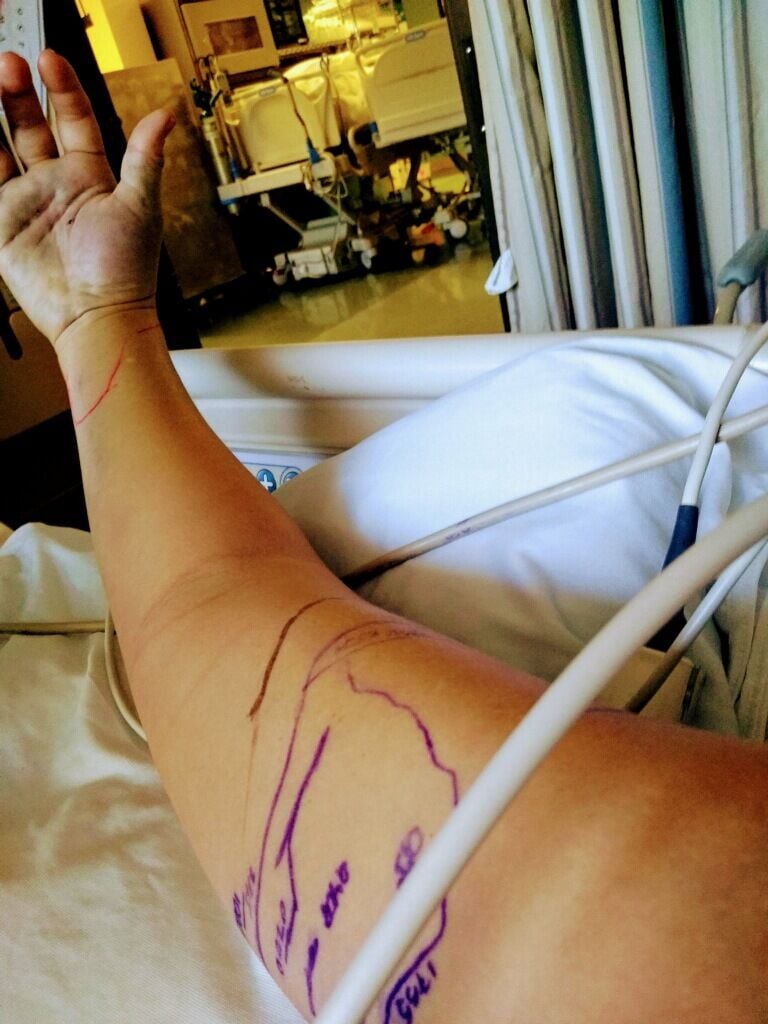 A photo from the hospital shows Celia Cartwright's bruised hand and the marks medical staff drew on her arm to track the spread of the venom. Cartwright said she wanted to share her story to warn people about the dangers of rattlesnakes but also let them know that if you are bit, "you will be OK." 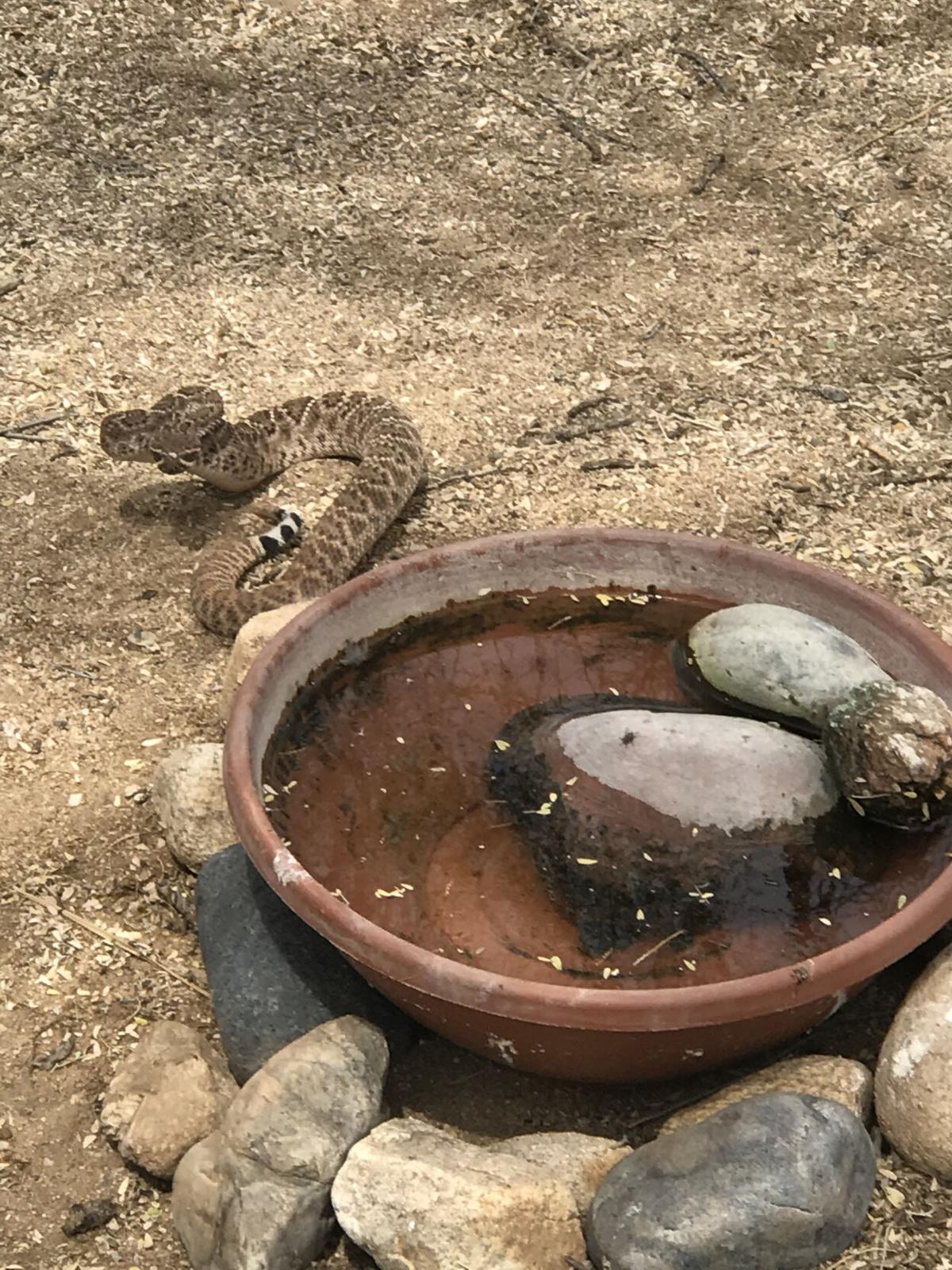 An Arizona Daily Star reporter came within inches of being bitten by this western diamondback rattlesnake, which was hiding under the water bowl in the backyard of his home in Northwest Tucson on May 1.

Roughly 250 rattlesnake bites a year might not sound like much in a state that’s home to more than 7.2 million people.

But that number is significant if you’re one of the unlucky few.

“It feels like there’s a fire inside your skin, and no matter how much water you put on it, you can’t put the fire out,” said Celia Cartwright, who was bitten on the hand at her Catalina Foothills condo on Sept. 14. “It’s not something you’d wish on your own worst enemy.”

Arizona typically leads the nation in the number of rattlesnake bites per capita. Last year, Pima County recorded 100 bites, more than any other county in the state. Eleven of those happened in Tucson’s 85718 ZIP code, where Cartwright lives.

The state is home to 13 kinds of rattlesnakes, and they share the landscape with an active human population that likes to get outside and enjoy Arizona’s trademark sunny weather.

“Snakebite season really starts in March, depending on temperatures, and lasts through the end of September or early October,” Shirazi said.

Bites generally spike in April, May, August and September, when both people and rattlers tend to be more active during the day.

The two poison control centers in Arizona received 259 reports of people bitten by rattlesnakes statewide in 2020. The number was 274 in 2019 and 234 in 2018, though not every bite gets reported.

“It’s not something that I recommend,” Shirazi said.

Some of the most serious cases involve multiple strikes or bites to the face, neck or upper torso that can cause a person’s airway to swell shut, Shirazi said. A bite on the calf or another large muscle can also be debilitating because of the way venom destroys tissue.

He said the worst hand injuries they see are often the result of someone bitten while feeding a captive rattlesnake, since the reptiles tend to inject more venom into their prey than they do during a defensive strike.

The poison and drug information center has cataloged more than 4,000 bite victims across Arizona since 1999, and Shirazi said they rarely fit the old stereotype of some drunk youth messing with a snake to prove his masculinity.

Most people — men and women both — encounter rattlesnakes while hiking in the desert, searching the bushes for a lost golf ball or working in their yards, he said. A sizable share of them are landscapers and groundskeepers who are bitten on the job.

According to the center, the average age of Arizona snakebite victims is in their 50s. More than a third of the people bitten in Pima County last year were 60 or older.

On the evening Cartwright was bit, the 55-year-old personal trainer had just come home from teaching a class and noticed that the plants looked a little thirsty in her yard near Swan Road and Sunrise Drive.

As she fiddled with the hose, she felt a sharp pain and pulled her hand back to reveal two red puncture marks on her right palm.

At first, she thought she might have impaled herself on a garden tool. Then she saw the snake coiled up with the hose.