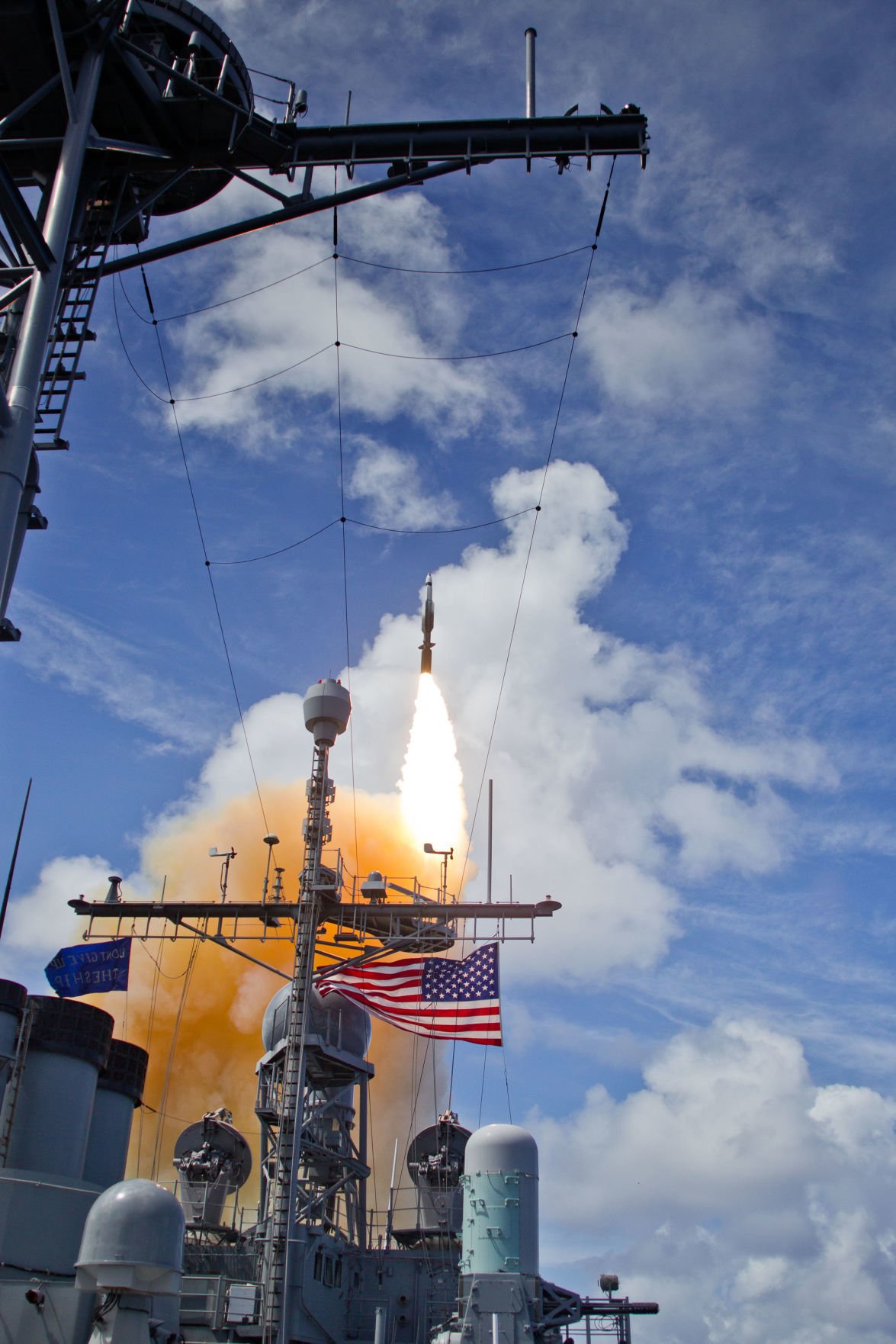 An SM-3 Block IB interceptor launches from the USS Lake Erie during a Missile Defense Agency test. The interceptor is already deployed on at least nine U.S. warships. 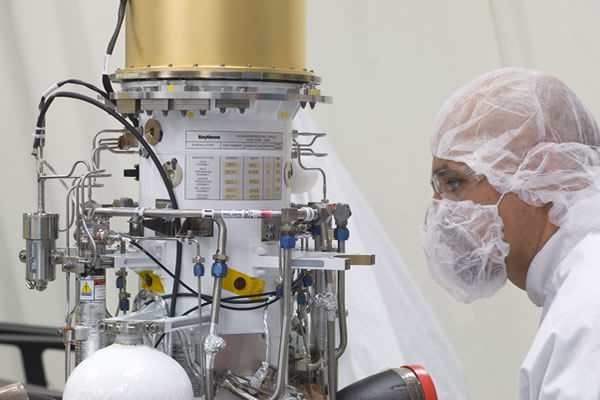 A technician inspects an exoatmospheric kill vehicle made for the ground-based missile interceptors at Raytheon’s “Space Factory” in Tucson.

A technician at Raytheon’s “Space Factory” in Tucson.

Tucson-based Raytheon Missile Systems marked the delivery of its 400th Standard Missile-3 ballistic missile interceptor last week, but that could be just the beginning for one of the company’s biggest programs.

Despite the stalled negotiations over the fiscal 2020 defense budget, Raytheon expects to land billions of dollars in multiyear Pentagon contracts for hundreds of SM-3 and related SM-6 missile interceptors amid growing global missile threats.

The company also is in line for a full-rate production contract for the next-generation SM-3 version, the larger and faster SM-3 Block IIA, and the State Department has tentatively approved a $3 billion contract to supply those interceptors to a development partner Japan.

Raytheon’s growing missile-defense business is a major reason the company has added more than 2,000 workers in a major local expansion since 2016 — and last week announced the addition of more than 1,000 Tucson jobs.

Ballistic missile testing by would-be nuclear powers Iran and North Korea, as well as stepped up testing by China and Russia, are adding urgency to the issue.

Raytheon’s SM-3 program director, Roy Donelson, said the SM-3 has evolved into a significantly more capable weapon as the company built on the legacy of the Standard Missile series of naval missiles — originally developed by General Dynamics as a ship-defense system in the 1960s.

“It is the only ballistic missile defense effector in the MDA (Missile Defense Agency) that is in full-rate production, so we’re very proud of that,” Donelson said. “We have a great pedigree and history that’s helping us as we move forward.”

Raytheon is in active negotiations with the U.S. Missile Defense Agency on a five-year contract to procure the SM-3 Block IB, the latest deployed version mounted on U.S. and Japanese warships, he said.

Separately, Donelson said, the company has reached a tentative agreement with the Navy on a new, five-year procurement contract for the SM-6, a multimission version that can be used for surface strikes as well as air and close-range missile defense.

A missile-defense advocate said he sees a growing need to use the SM-6 as main line of defense against a growing threat of cruise missiles — which typically fly relatively low at subsonic speeds.

Ellison said the SM-6 could also be stationed on land, perhaps on Guam to protect the Pacific area.

Though missile-defense needs are seen as urgent, the fiscal 2020 defense budget process currently is stymied largely by a dispute over border-wall funding — not to mention the paralysis brought on by the impeachment inquiry against President Trump.

Donelson said that both the House and Senate versions of the pending defense appropriations bills support the multiyear missile buys of the SM-3 IB and the SM-6, after Congress authorized the practice last year to save money.

The Pentagon estimated the moves would save taxpayers an estimated $637 million, or about 13.5% on contracts that combined would cost more than $4.7 billion under annual contracting.

Donelson said Raytheon will be able to maximize the savings by bundling together procurement of parts common to the two missiles.

“They are two different customers, but Raytheon has bundled procurements together especially with common components, to yield great savings for both the company and the American taxpayer,” he said.

He deferred to the Pentagon on the savings projections but said the company expects to significantly exceed the 10% threshold for expected cost savings required for the multiyear deals.

The SM-3 IB, which is already deployed on at least nine U.S. warships with the Aegis launch and control system, is an upgraded version of the SM-3 Block IA, featuring an improved target seeker, an advanced signal processor and improved flight control system.

The SM-3 IB went into limited production in 2014 and full-rate production in 2017, after succeeding in seven of nine test flights, and Raytheon has delivered 200 Block IBs to date, Donelson said.

The Block IB program, which received full production authority early in fiscal year 2018 after years of delays, delivered 12 of 36 planned interceptors in fiscal year 2018, until the discovery of a parts quality issue, according to a report issued in September by the Congressional Research Service.

Donelson said the issue has been resolved and Raytheon has caught up with deliveries.

“In production programs, we find issues from time to time,” he said. “With the SM-3, since it is the most advanced missile in full-rate production, we must ensure the mission assurance requirements are met and aim to find any potential issues before they are delivered to the fleet.”

Donelson said Raytheon solved the quality issue late last fall and has been delivering at the highest rates per month ever for the program, noting that about 800 people work on Raytheon’s SM-3 programs.

Meanwhile, the company expects to receive its first, low-rate production contract for the bigger SM-3 Block IIA soon, after the missile passed key flight tests in October and December 2018.

“We’re hopeful. We believe we are in the final phase of the final reviews of that and we’re expecting that soon,” Donelson said.

The Block IIA missile is larger in diameter than the prior SM-3 versions, at 21 inches, with a larger, more maneuverable kinetic “kill vehicle” — which destroys its target by sheer impact rather than with explosives — and upgraded target sensors.

The SM-3 Block IIA is believed to have the reach and capability to hit long-range intercontinental ballistic missiles, though so far it has only been tested on intermediate-range targets.

But that could change, after the Pentagon recently canceled a program to develop a new kill vehicle for its ground-based, long-range missile interceptors, the Ground-based Midcourse Defense system based in Alaska and California.

That effort began after the failures of a kill vehicle made by Raytheon.

In the 2018 national defense authorization bill, Congress required the Pentagon to test the SM-3 Block IIA against an ICBM target.

But the current House version of the 2020 defense authorization and appropriations bills would cut funding for the ICBM test and redirect the remaining money to another test against an intermediate-range target.

“The SM-3 has inherent capabilities. We think it is capable of (defeating) advanced threats including ICBMs, and so we would look forward to a test that would support that,” Donelson said, noting the decision is in the hands of Congress and the president.

Ellison, of the Missile Defense Advocacy Alliance, said he thinks the Pentagon will end up testing the SM-3 Block IIA against both intermediate and ICBM targets.

“They’ve got to do both in this rapid acquisition cycle … they can’t wait, they’ve got no choice here,” Ellison said, adding that the SM-3 IIA will allow earlier intercepts and another layer of protection.

The nation’s missile-defense programs, including the mainly ship-launched SM-3, have suffered their share of technical setbacks and test failures and indeed, some critics doubt whether the systems will work in a real-life scenario.

Development of the SM-3 Block IIA was delayed by two test failures in 2017 and 2018 before a successful intercept in October 2018 put the program back on track.

“Technically, hitting a bullet with a smaller bullet is a real challenge,” said Dan Grazier, a fellow at the nonprofit watchdog agency the Project on Government Oversight.

Citing the roughly 50% success rate of the ground-based system since 1999, Grazier said that won’t cut it if one nuclear-tipped missile gets through.

“The more of these systems that we try and that don’t work and are eventually canceled kind of bolster the argument that this might be a bridge too far, technologically speaking, because we’ve been working on this for decades now and we still can’t crack that nut.”

PHOENIX — Raytheon Missile Systems plans to add more than 1,000 workers in Tucson over the next three years as it expands to meet demand for i…

The deal to create nation's second largest defense firm is still on track to close in the first half of 2020.

An SM-3 Block IB interceptor launches from the USS Lake Erie during a Missile Defense Agency test. The interceptor is already deployed on at least nine U.S. warships.

A technician inspects an exoatmospheric kill vehicle made for the ground-based missile interceptors at Raytheon’s “Space Factory” in Tucson.

A technician at Raytheon’s “Space Factory” in Tucson.