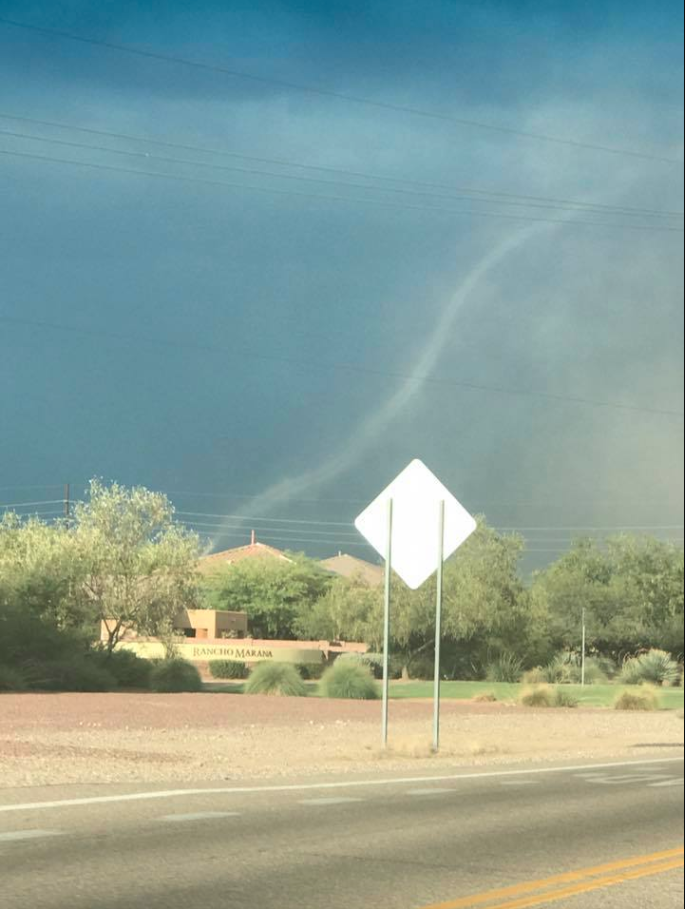 A Twitter photo shows a landspout tornado in the Rancho Marana/Gladden Farms area of Marana. 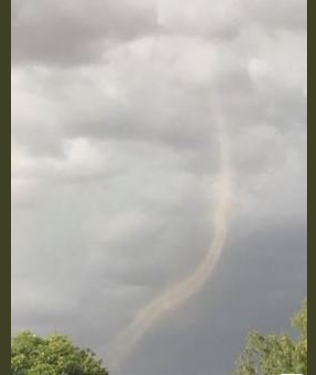 The possible landspout tornado as seen from a park in Gladden Farms, in the Marana area, shortly before 6 p.m. Friday, July 14.

The National Weather Service is trying to confirm whether a landspout tornado hit ground this evening in Pinal County near Marana, as indicated by two photos posted on Twitter.

One photo, tweeted by KVOA-TV and attributed to Toni Leon, showed the possible tornado in the sky over the Rancho Marana/Gladden Farms area.

Another, shared with the Arizona Daily Star and with KOLD-TV, was taken by Rachel Hess from a park in Gladden Farms just before 6 p.m.

A landspout tornado is a dust devil that connects to a funnel cloud, essentially "a weak tornado," said Rob Howlett, a weather service meteorologist.

Marana police said they had no reports of damage in their jurisdiction, which is in Pima County, and that the weather incident was in Pinal County. Pinal County authorities didn't immediately return calls seeking comment.

"At first, everyone at the park thought it was a dust devil," Hess said, "but as it truly came to form we all realized it was forming from the sky down and not from the ground up. It was really cool to see. It's the first one I've ever seen in my life. Glad it was small and not something that would cause any damage!"

It appeared to touch down in Pinal County, but the weather service hasn't been able to confirm, said service meteorologist Jordan Pegram.

This cames as the weather service issued a tornado warning in the Red Rock area, in the Interstate 10 corridor north of Tucson, until 7:30 p.m. Friday, July 14.

The warning was prompted by rotation shown on radar in the mid-levels of the atmosphere for a couple of hours Friday evening, "which concerned us, moving toward the I-10 area," said Howlett. The rotation was starting to weaken shortly before 7:30 p.m., he said.

Video posted on Twitter showed heavy rain and low visibility on I-10 in the Marana area as of 7 p.m.

There is also a severe thunderstorm warning for much of Southern Arizona, from Green Valley-Sahuarita north through Tucson and on to the Phoenix area, until 11 p.m., with wind gusts up to 75 mph possible, along with hail and lightning, the weather service says.

Thirty-one restaurants failed June inspections by the Pima County Health Department. Here are all of them.

Photos: How many of these Tucson concerts did you see live?

Tucson has long had a reputation for being a stellar music town. How many of these concerts held in town over the last 20 years can you say yo…

Mt. Hopkins was hit with a gust of wind that reached 84 miles per hour Monday.

A Twitter photo shows a landspout tornado in the Rancho Marana/Gladden Farms area of Marana.

The possible landspout tornado as seen from a park in Gladden Farms, in the Marana area, shortly before 6 p.m. Friday, July 14.