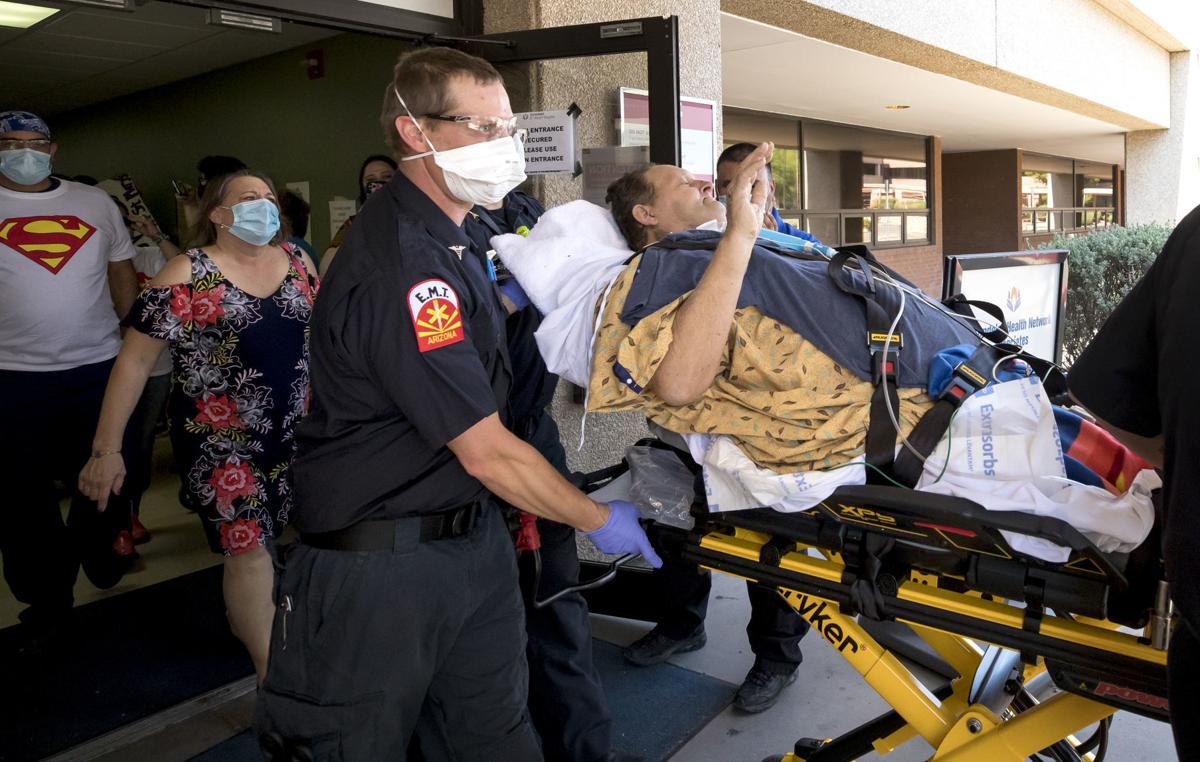 Recovered COVID-19 patient Larry Delfs, a St. Mary’s Hospital EMT, was hospitalized for six weeks, and his family was told six times he was not going to make it another 24 hours. 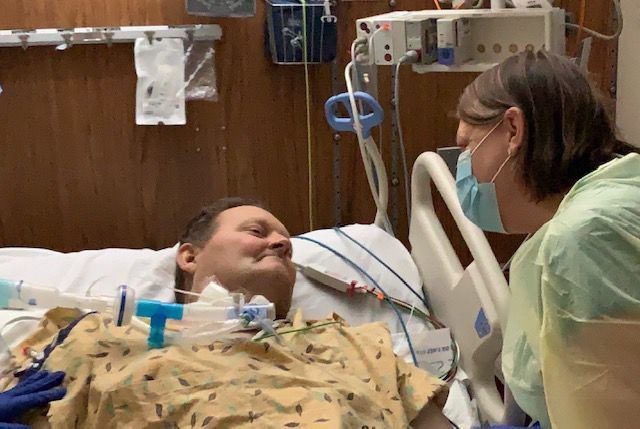 After six weeks in the hospital battling COVID-19, retired Tucson Fire Department paramedic Larry Delfs took the next step this week in his recovery from an ordeal his family described as one of the most difficult he has ever faced.

Delfs, 62, was admitted to St. Mary’s Hospital on March 25 for what he thought was complications from his asthma. His family described the next several weeks as a fight for Larry’s life that at one point looked lost.

“We were told six times over the last 43 days that he wasn’t going to make it 24 hours,” said Kourtney Trewern, Larry’s youngest daughter. “We just continue to sink into our faith in God and just give him all the glory for all this because he has seen our dad through the last 43 days.”

After being transferred to St. Joseph’s Hospital on March 26, Larry’s breathing began to worsen, and he developed respiratory failure, which required ventilation. With an extremely low blood oxygen level, Larry also suffered kidney damage and had to be put on dialysis. At the same time, he was also battling a high fever and plummeting blood pressure.

As Larry’s condition worsened, he was transferred back to St. Mary’s Hospital, where he works as a paramedic, for specialized care. On March 29, he was placed on an ECMO machine, which involves a circuit of pumps, tubes, filters and monitors that take over for the heart and lungs. It channeled Larry’s blood outside his body in order to add oxygen and remove waste before propelling it back into the circulation system.

“If we had not used the ECMO device when we did, Mr. Delfs may not be alive today,” said Dr. Kapil Lotun, director of Carondelet’s cardiac cath lab.

By April 7, his youngest daughter’s birthday, Larry’s condition had begun to decline again. His wife, Kathy Delfs, who also experienced a mild form of COVID-19 while he was in the hospital, said this was one of the scariest days for the family.

“They told us that his body was in shock and that they didn’t think he would survive the night. We were invited to the hospital that night to say goodbye,” Kathy said through tears. “I just remember crying out to God that night and saying: ‘He belongs to you. And if I get him back, it’s because you give him back to me.’ ”

In a rallying community effort, the Tucson Fire Department and other Tucsonans gathered outside the hospital that day to stage a lights-and-sirens show to support Larry and his family. Within 24 hours, Larry’s vital signs began to improve.

After several ups and downs, Larry’s condition stabilized after three weeks on the ECMO device. Dr. Afshin Emami performed a tracheostomy on Larry after he had been intubated for 21 days, which helped contribute to his pulmonary recovery. Larry has since tested negative for COVID-19.

“It’s nothing short of miraculous. It’s just a miracle that he survived.” Dr. Lotun said. “All the nurses, respiratory techs, and intensivists were the real heroes, at the bedside 24/7. Everybody involved just stepped up to really give him the best chance to survive.”

This week, Larry was moved from the hospital to a rehabilitation facility to continue his recovery.

Even after being released from the hospital, Larry still has several weeks of recovery ahead of him. According to Kathy, Larry’s doctors are anticipating he’ll need to stay at the rehab center for three to five weeks.

He is still on a ventilator and will need to breathe on his own and get his strength back before making the transition home.

Kathy said they are taking everything day by day and will rely on each other, as well as her faith, to get them through. Throughout this journey, the family has continuously referred to Larry as “Superman,” a nickname they say comes from his long history of saving the day.

“If his family needed something, he would put sweat, blood and tears to make sure it happened. And he’s basically the heart of not only our family, but also our extended family. He’s the first to go to help anybody who needs something. And so he’s just kind of adopted that name,” Kathy said. “Plus, he’s really into superheroes. I think he is the typical, mild mannered, humble Clark Kent.”

In addition to being an everyday hero for his family and friends, Larry also continued to serve his community until the day he got sick. Even after a 25-year stint with the Tucson Fire Department, Larry came out of retirement after nine months to become a paramedic at St. Mary’s. That was five years ago.

“His Superman name has kind of followed him into his job because he’s very good at what he does,” Kathy said. “He was always the first one that people would grab if they had a really critical incident when he was at work. He is very well thought of and respected there.”

More than anything, Kathy and her daughters said they were grateful for the team of health-care workers and community members who rallied behind Larry and their family since the beginning.

“We just feel so humbled and so grateful for just everything they’ve done along the journey. There was a beautiful show of community support, and not just for Larry, but just the community coming together, the health workers supporting each other, admiring each other for the wonderful, wonderful job that they did for him.”

Video illustrates the 'dynamic' spread of coronavirus in Tucson

As quickly as coronavirus cases are resolved throughout Pima County, new cases surface, the video shows.

If Jesus Medina had a chance to speak with his aunt one last time, he would simply say, “I’m sorry.”

The number of confirmed coronavirus cases across Arizona is 10,960, the Arizona Department of Health Services said.

Recovered COVID-19 patient Larry Delfs, a St. Mary’s Hospital EMT, was hospitalized for six weeks, and his family was told six times he was not going to make it another 24 hours.