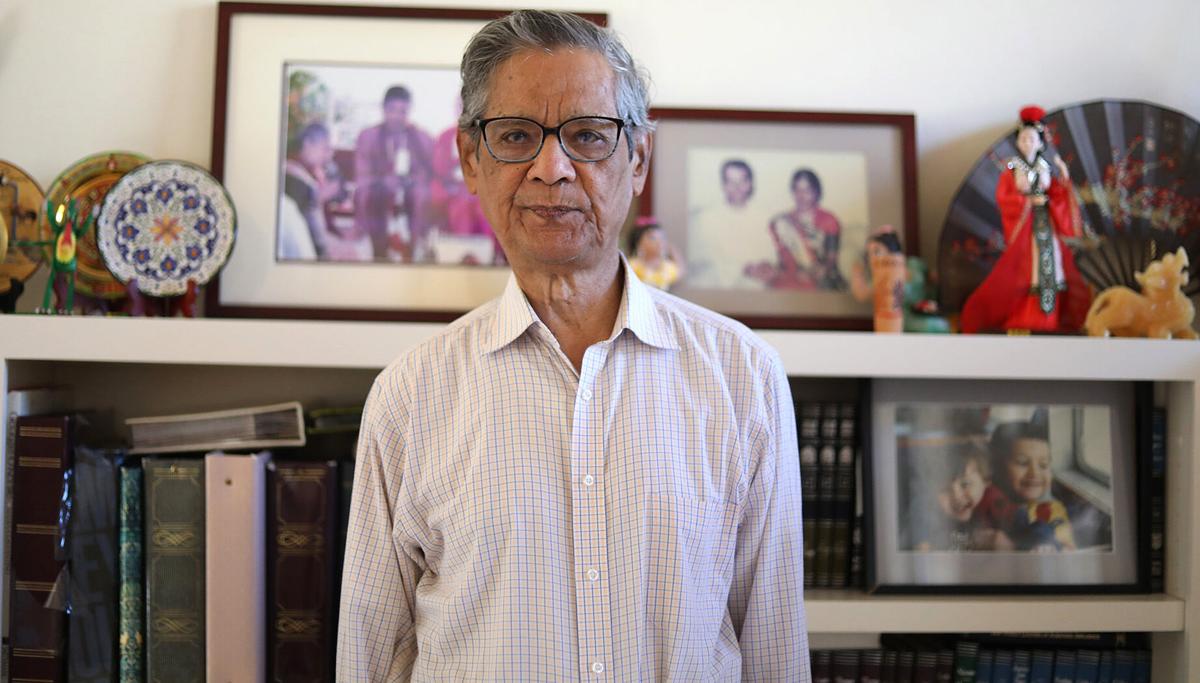 University of Arizona Professor Emeritus Rabi Bhattacharya in his home Wednesday. Bhattacharya is honoring his late wife with a $1 million gift to the UA Steele Children’s Research Center to create the Gouri Bhattacharya Endowed Professor of Pediatric Cancer. 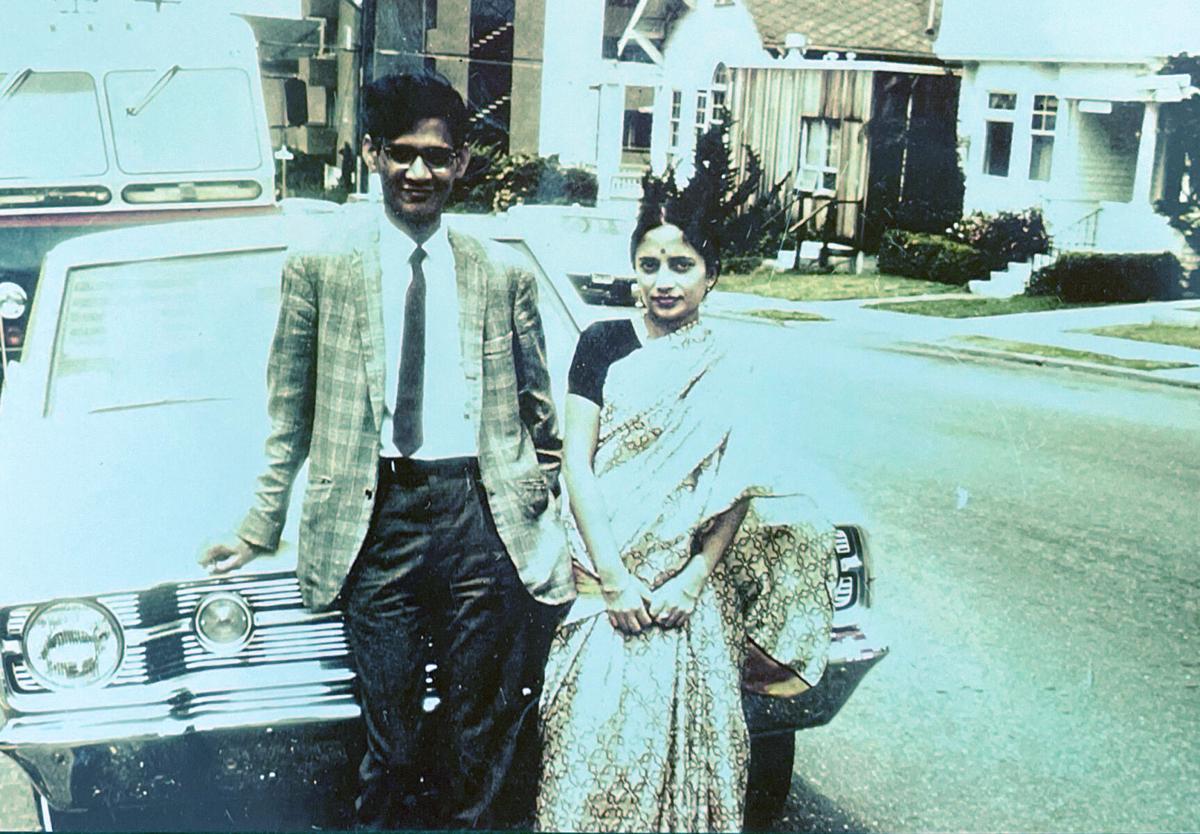 The Bhattacharya’s first wedding anniversary in 1968.

UA Professor Emeritus Rabi Bhattacharya is honoring his late wife with two gifts for causes that were close to her heart.

The first is $1 million to the University of Arizona Steele Children’s Research Center to create the Gouri Bhattacharya Endowed Professor of Pediatric Cancer. Gouri was diagnosed with lung cancer in late 2017 and had empathy for children battling the disease.

She also found strength from them while seeing them fight for life during treatment at MD Anderson Cancer Center at the University of Texas in Houston, said Bhattacharya. Gouri died a year later at Tucson Medical Center.

UA President Robert C. Robbins said in a news release that Bhattacharya’s gift honors Gouri’s legacy and “will advance the university’s commitment to the children and families impacted by this devastating disease.”

The endowed professorship will strengthen the center’s efforts to recruit the best minds to solve the most challenging issues in pediatric cancer today, said Fayez K. Ghishan, professor of pediatrics and director of the Steele Children’s Research Center.

“Our work has always been about creating and propagating the kind of knowledge and science that informs personalized treatments for kids with cancer,” said Ghishan, adding that Bhattacharya’s generosity “will strengthen our capacity to bring these exciting discoveries made right here in Tucson to bedsides all over the world.”

The second gift in memory of Bhattacharya’s wife of 51 years is a $380,000 donation from him and family to a charity in India for a nonprofit microfinance project that serves women in a rural suburb of Kolkata, which is where Rabi and Gouri were raised. The project is operated out of the Gouri Bhattacharya Memorial Building, which also houses an elementary school for the participants’ children. Gouri was a high school history teacher in Kolkata.

Approximately 500 women have participated in the microfinance project that includes the construction of a pond on plots of land the women own. The women grow fish, including catfish and buffalo fish, and sell the fish at market, supporting their families, explained Rabi Bhattacharya.

“She was enormously courageous and never complained about her cancer,” recalled her husband.

After her death, a doctor who treated Gouri in Houston sent a card to Bhattacharya saying his wife “fought the disease with grace and dignity. She will be missed.” Bhattacharya took Gouri’s ashes to India and sprinkled them in the Ganges River, a sacred body of water to Hindus.

The couple — not having met — married in 1967 in Kolkata after Rabi’s best friend, who was Gouri’s cousin, spoke to their families.

“She was the best thing that happened in my life,” said Bhattacharya, who received his bachelor’s and master’s degrees from Presidency College and the University of Calcutta, respectively. He completed his doctorate in statistics from the University of Chicago in 1967.

The couple moved to California where Bhattacharya was hired as an assistant professor in the department of statistics at the University of California, Berkeley, and then went to work at the UA as associate professor in the department of mathematics. In 1982, he joined the faculty of Indiana University as a math professor, and Gouri enrolled in classes, receiving a bachelor’s in history. They returned to Tucson in 2002, and Bhattacharya was hired as a tenured full professor in mathematics at the UA, retiring in 2018. During his career Bhattacharya had to travel to present at conferences, and Gouri, who enjoyed going on trips, accompanied him to Western Europe, Japan, China, Hong Kong and Brazil.

Bhattacharya credits his wife for raising their daughter and son and teaching them Bengali. Their daughter, Urmi Bhattacharya Holz, received a doctorate in mathematics from Stanford University. She works for the federal government and lives in Maryland. Their son, Deepta, received a doctorate in biology from the University of California, Berkeley and is a UA professor of immunobiology.

“She was my life’s anchor,” said Bhattacharya of Gouri, who remains in his heart.

The study will investigate why Hispanics tend to live longer or survive illnesses more than whites — known as the Hispanic Health Paradox.

His daughter, Dr. Amy Wagelie-Steffen, and clinic staff will carry on his legacy.

The Barbari family has struggled and experienced a long, horrendous journey to make it here. It began 35 years ago

Officials will run a capital campaign to raise funds for renovations at the 4,500-square-foot building, and a grand opening is expected in May 2022.

University of Arizona Professor Emeritus Rabi Bhattacharya in his home Wednesday. Bhattacharya is honoring his late wife with a $1 million gift to the UA Steele Children’s Research Center to create the Gouri Bhattacharya Endowed Professor of Pediatric Cancer.

The Bhattacharya’s first wedding anniversary in 1968.