Road Runner: Community supportive of campaign to name Tucson overpass for late trooper
Share this
1 of 3 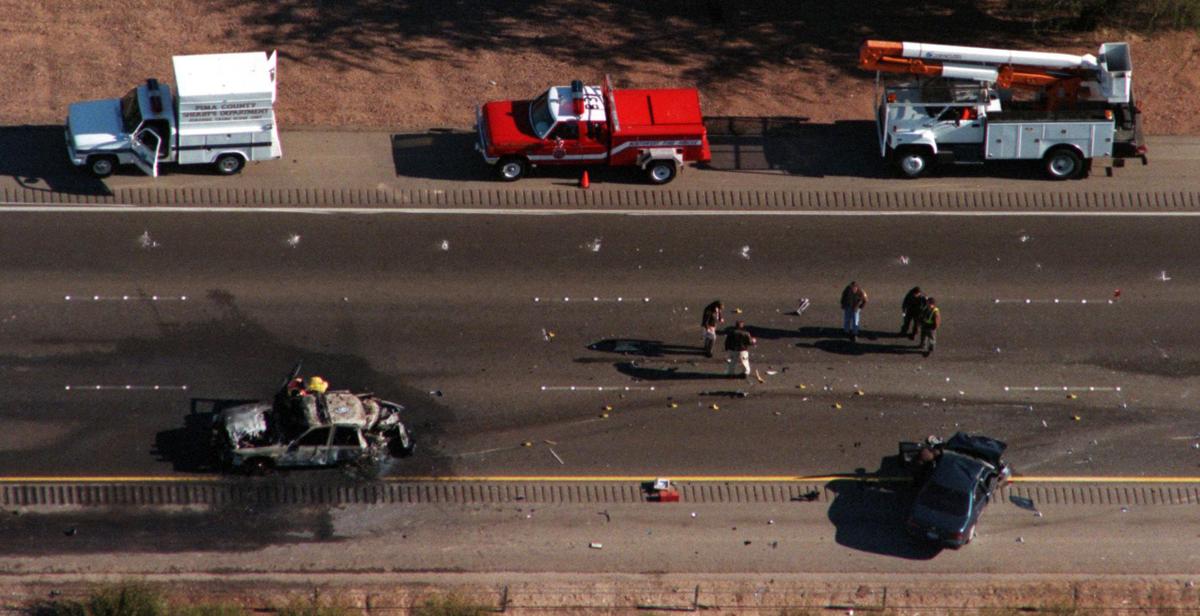 This Dec. 9, 1998, photo shows the patrol car, left, driven by Arizona Department of Public Safety Officer Juan Cruz. The car was engulfed in flames after being struck from behind by another vehicle, right, on Interstate 10 at Ruthrauff Road. 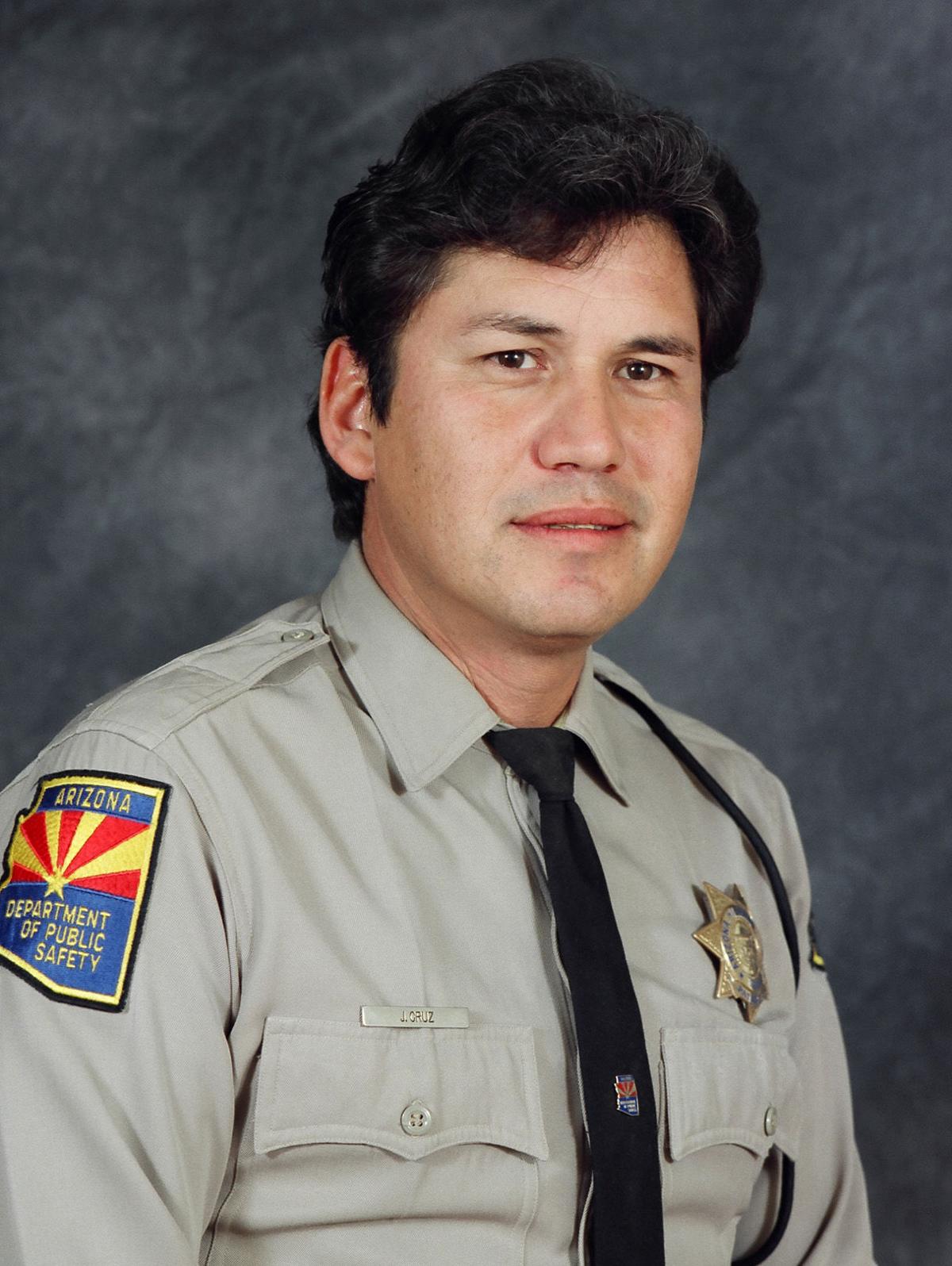 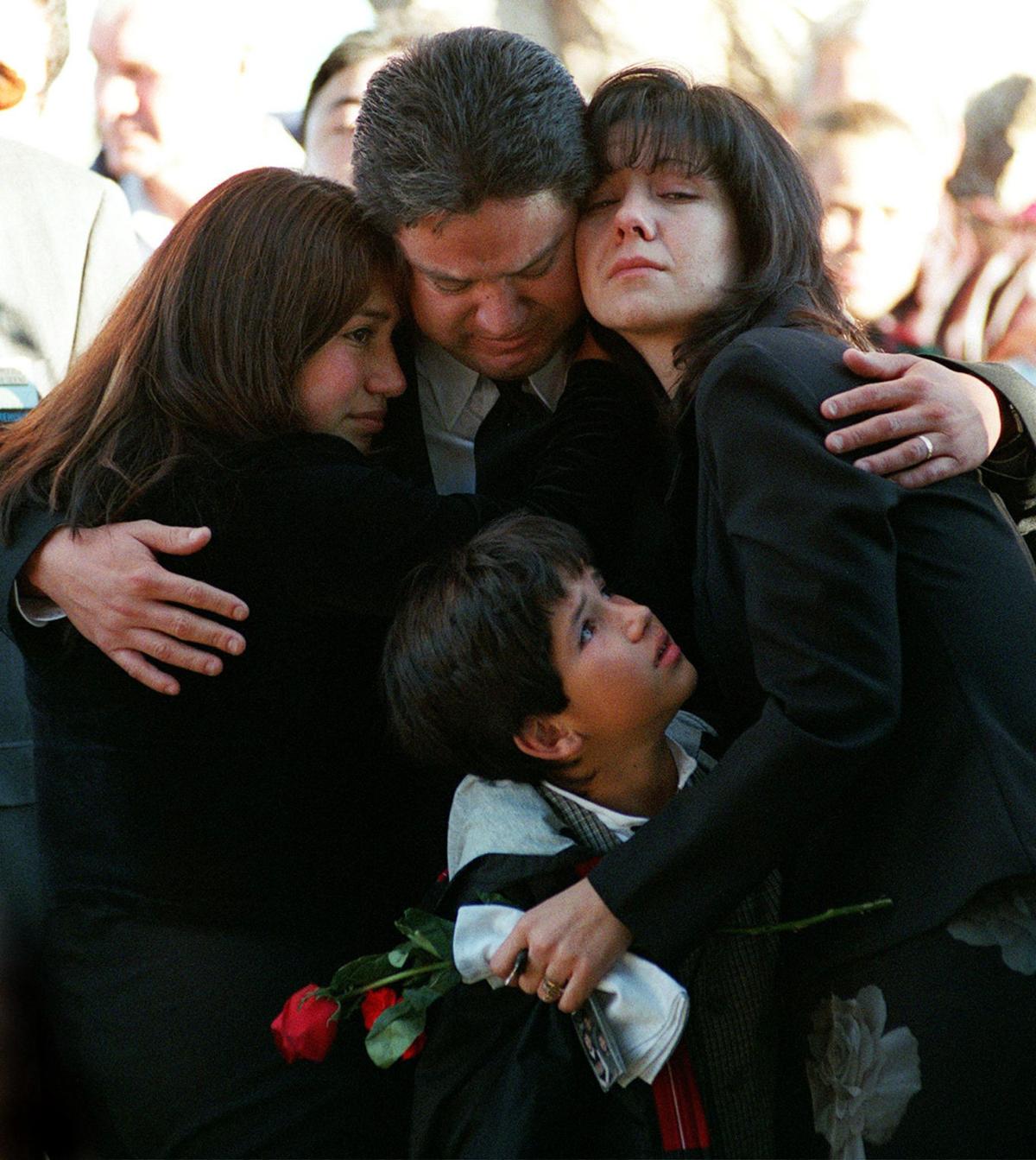 Armando Cruz, at the gravesite of his brother Juan Cruz on Dec. 12, 1998, with his wife, Veronica, right; daughter Marie; and son Armando Jr. Juan Cruz was a Department of Public Safety Officer who was killed while working a traffic accident on I-10 three days earlier.

The Arizona community has been quick to rally around an effort to honor a state trooper killed in the line of duty more than 22 years ago in Tucson.

A “Trooper Juan Cruz Memorial Overpass” sign would appear at the overpass being constructed at the new Interstate 10-Ruthrauff Road interchange, honoring the Arizona Department of Public Safety veteran.

The department said their 48-year-old trooper was blocking the high-speed traffic lane of I-10 in Tucson with his patrol vehicle Dec. 9, 1998, while investigating a prior collision near Ruthrauff. A westbound vehicle crashed into the patrol vehicle with Cruz inside.

The driver involved was sentenced to 11 years in prison.

“He was very passionate about being a police officer, and people’s safety and why it was important,” said Marissa Cruz-Long, one of Cruz’s five children, who frequently saw her dad in action while on ridealongs. “He was pretty amazing. He was very caring, very respectful, just really happy and excited every time he went out there to do his job.”

The campaign started about six months ago when a close family friend, Jim Sayre, saw construction crews in the I-10 and Ruthrauff Road interchange area on his way to work.

“Every day I drive past this location, and as I started to see a project developing there, I did a little research and found out exactly what was being constructed. It just felt like an opportune time to honor Trooper Cruz with the project happening there,” Sayre said.

Sayre said he believed the initiative should be a “slam dunk” in the eyes of state officials.

“What I tell folks is this was a state employee, performing his state job on a state highway, and the state happens to be constructing a physical structure at this particular location,” said Sayre. “It’s just a perfect opportunity for us to honor the service that Mr. Cruz had to the state and to the folks that drive that freeway every day that don’t know that a state trooper was killed there in the line of duty protecting everyone driving that road.”

Sayre began the formal process of making the requests to Arizona officials, attempting to speak to whomever would accept a request.

A few weeks ago, while unsure of the public’s reaction, Sayre decided to engage the public about the efforts of the campaign in Cruz’s honor. In less than a day a couple thousand people had signed a Change.org petition.

“I think it goes to show how supportive the public is of the idea and the effort. And it makes you smile, and it makes you appreciate the work that we’ve done for the last six months or so,” Sayre said.

As of Saturday, 6,616 people had signed it and more than 1,000 Facebook users either are following or have “liked” the campaign page.

“We’re so grateful for the outpouring of support that we’ve gotten so far. The comments that people are putting on there, from people who knew him, people who know of him, and even if they hadn’t heard of him are supporting us,” Cruz-Long said. “They feel like this is the right thing to do and respect him as a police officer and respect the sacrifice that he made. It’s been tremendous.”

But for now, the process to get the request reviewed has hit an obstacle.

“There was nobody willing to come up with a process to review my request,” Sayre said.

The official review board within the State Board of Geographic and Historic Names was not refunded before the previous state legislative session ended. The board now awaits reinstatement with the potential passage of House Bill 2058.

There is hope the board will be back to reviewing requests and possibly approve the request in Cruz’s honor by the time the interchange is completed in late 2021.

If approved, the change would reflect more of the strong family man Cruz’s family knew and less of the “nightmare” they’re reminded of when passing the area,” said Cruz-Long.

“They did some construction, but there was still a bump (on the road), or I drive by and I know the milepost and look at it, and it’s heartbreaking to know that this is where my dad took his last breath,” Cruz-Long said.

While they wait, the family is keeping the memory of Cruz alive by not only remembering his work as a trooper but as an intellectual and passionate musician who instilled a love of music in his family and now seen in his grandchildren.

“They’ve learned so much about him, and they’re very proud of him, and to see something like this take place and to be able to drive through that area and to know that their grandfather, that’s where he gave the ultimate sacrifice, but to know that the community that he sacrificed his life for respects him and gave back to him, would be such a beautiful thing,” Cruz-Long said.

Anyone can lend their support for the campaign by visiting the  Facebook page at facebook.com/TrooperJuanCruz and the petition at bit.ly/3pC5ukh

Officials said "Traffickers move their victims on all modes of transportation, and sometimes use public transit due to its low cost, greater anonymity in buying fare cards ..."

If you get a text asking you to update your driver’s license, don’t click.

The money’s purpose is to address exposure mitigation, contactless payment and other measures used to strengthen riders’ confidence in using the transit system during the pandemic.

The agency says the new model will assist in better regional transportation planning for motorists and other modes of transportation.

This Dec. 9, 1998, photo shows the patrol car, left, driven by Arizona Department of Public Safety Officer Juan Cruz. The car was engulfed in flames after being struck from behind by another vehicle, right, on Interstate 10 at Ruthrauff Road.

Armando Cruz, at the gravesite of his brother Juan Cruz on Dec. 12, 1998, with his wife, Veronica, right; daughter Marie; and son Armando Jr. Juan Cruz was a Department of Public Safety Officer who was killed while working a traffic accident on I-10 three days earlier.