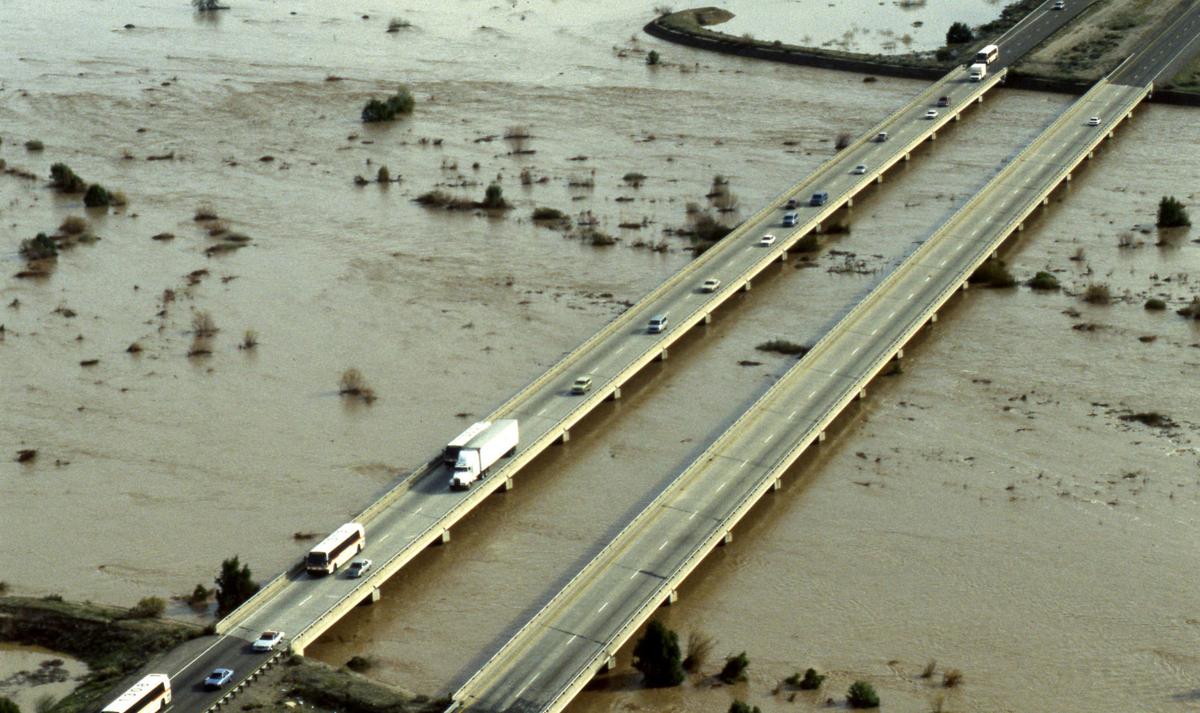 The widening of 23 miles of Interstate 10 south of Phoenix would include a new, six-lane bridge or bridges over the Gila River. The bridge, built in 1964, is seen here amid flooding on the Gila River in January 1993. 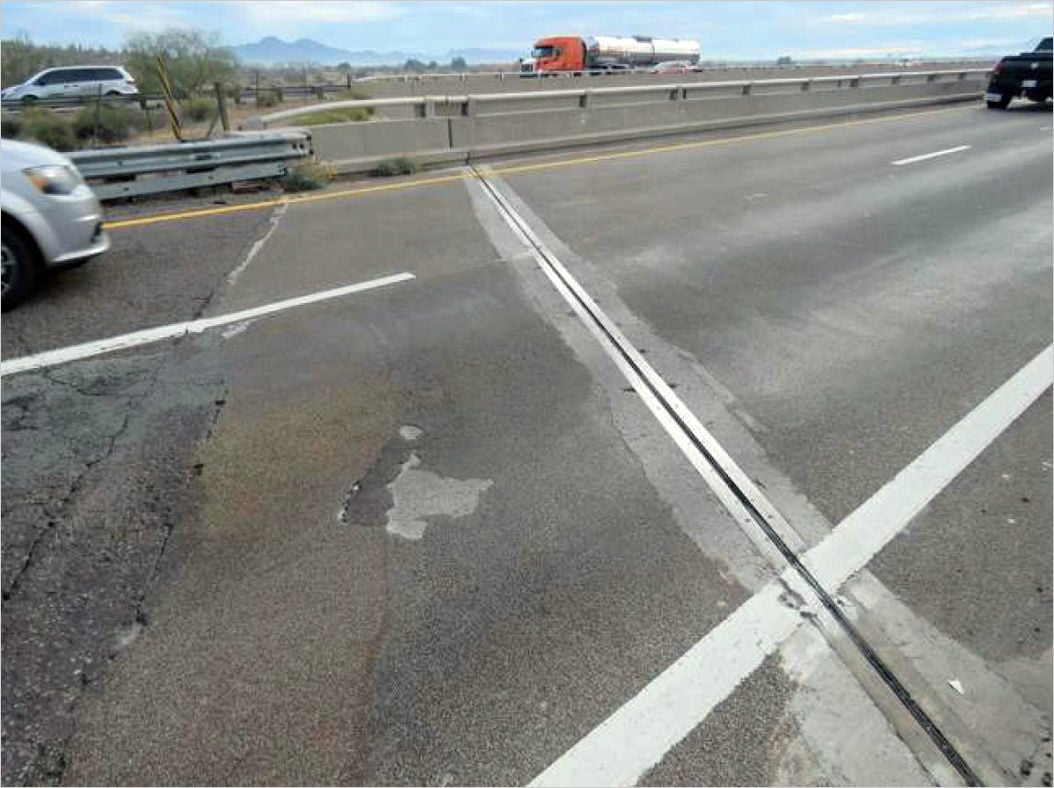 The deck of the Gila River bridges are often in need of repair due to their age. 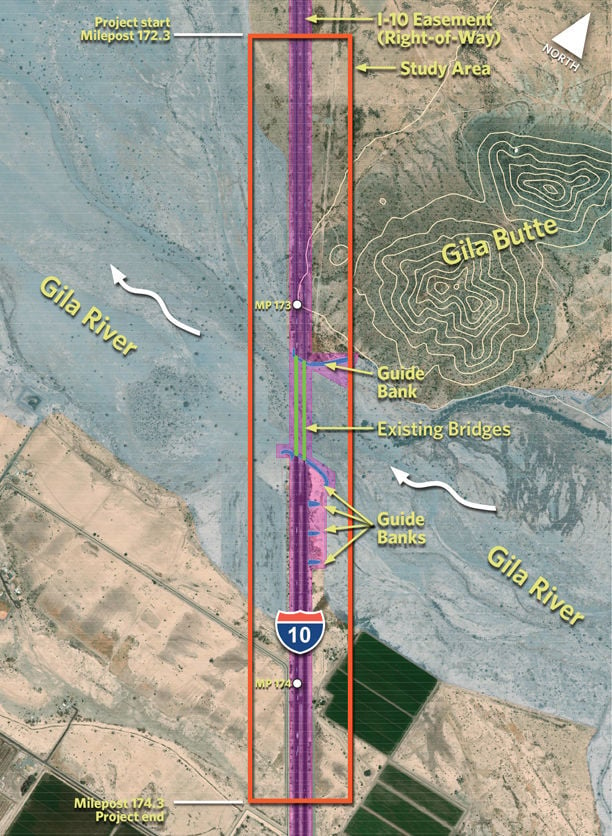 Map of the construction area for the proposed Gila River Bridge project on Interstate 10 south of Phoenix.

Improvement to the last 23-mile stretch of Interstate 10 between Tucson and Phoenix could come sooner than expected, according to the state budget plan Gov. Doug Ducey unveiled earlier this month.

Approximately $28 million is earmarked in the proposed budget to start construction on the Gila River Bridge. Additional funding from the Arizona Department of Transportation will address widening I-10 to three lanes in each direction from Casa Grande to Phoenix.

“Our budget puts the pedal to the metal, with the construction of a new six-lane bridge over the Gila River. This replaces a 56-year-old bridge. Sixty-two thousand people drive over it every day. That’s 23 million a year. So, let’s break ground ASAP,” Ducey said during his State of the State speech on Jan. 13.

The bridges, about a half-mile long, were built in the early 60s and would be the first in a two-part project to be replaced. The lane widening would follow.

“The portion of I-10 that connects Phoenix and Tucson is a vital transportation and commerce corridor and widening it to six lanes will improve public safety and enhance economic development opportunities in Central Arizona and the Gila River Indian Community,” the proposed budget said.

The state’s 2021 fiscal year arrives on July 1 and ends in June 2021. If approved, the $28 million will be delivered earlier. The money comes from $50 million earmarked for I-10 improvements in fiscal year 2023.

It would put a definite endpoint to when we could see construction arrive, said Quinn Castro, a transportation engineer with the Maricopa Association of Governments.

Federal funding will be available for the remainder of the bridge project’s cost, which totals around $36.6 million, according to ADOT.

The action stems from ADOT, the Maricopa Association of Governments and the Gila River Indian Community agreeing in October 2018 to an 18-month study of the I-10 corridor, which carries around 100,000 vehicles a day, a MAG official said in 2018.

“While a study currently underway will propose a timeline for the Gila River Bridge project, having dedicated funding in place would help the bridge improvements get underway as soon as possible,” according to a statement from the Arizona Department of Transportation.

Castro said ADOT has completed a draft project assessment detailing the area’s current conditions and the design alternatives, which is being reviewed internally by ADOT, the Gila River Indian Community and MAG.

“The project team is obviously pushing to get this out as quickly as possible, but they want to make sure to follow the proper process and get the feedback necessary from the Gila River Indian Community since this is on community land,” Castro said.

Officials have yet to decide which route to take regarding the project’s design and environmental work still needs to be completed, Castro said.

“The Phoenix-Tucson corridor is an economic artery for our state and it needs expanding. It’s time to accelerate completion of I-10’s widening, in both directions, between our two largest cities,” Ducey said in his speech.

Ruthrauff will be restricted to one lane in each direction near Highway Drive and Davis Avenue for about two weeks while crews install a water line as part of the interchange project.

Motorists should use caution and watch for personnel and equipment in the area.

The closure should last for two months. It is the first phase of the 20-month Broadway widening project between Euclid and Campbell avenues.

Motorists can use the side street north of Broadway and west of Tyndall as an alternate route.

But the bill faces an uncertain future and a possible legal challenge.

Project will widen freeway, construct bridge over I-10.

The widening of 23 miles of Interstate 10 south of Phoenix would include a new, six-lane bridge or bridges over the Gila River. The bridge, built in 1964, is seen here amid flooding on the Gila River in January 1993.

The deck of the Gila River bridges are often in need of repair due to their age.

Map of the construction area for the proposed Gila River Bridge project on Interstate 10 south of Phoenix.