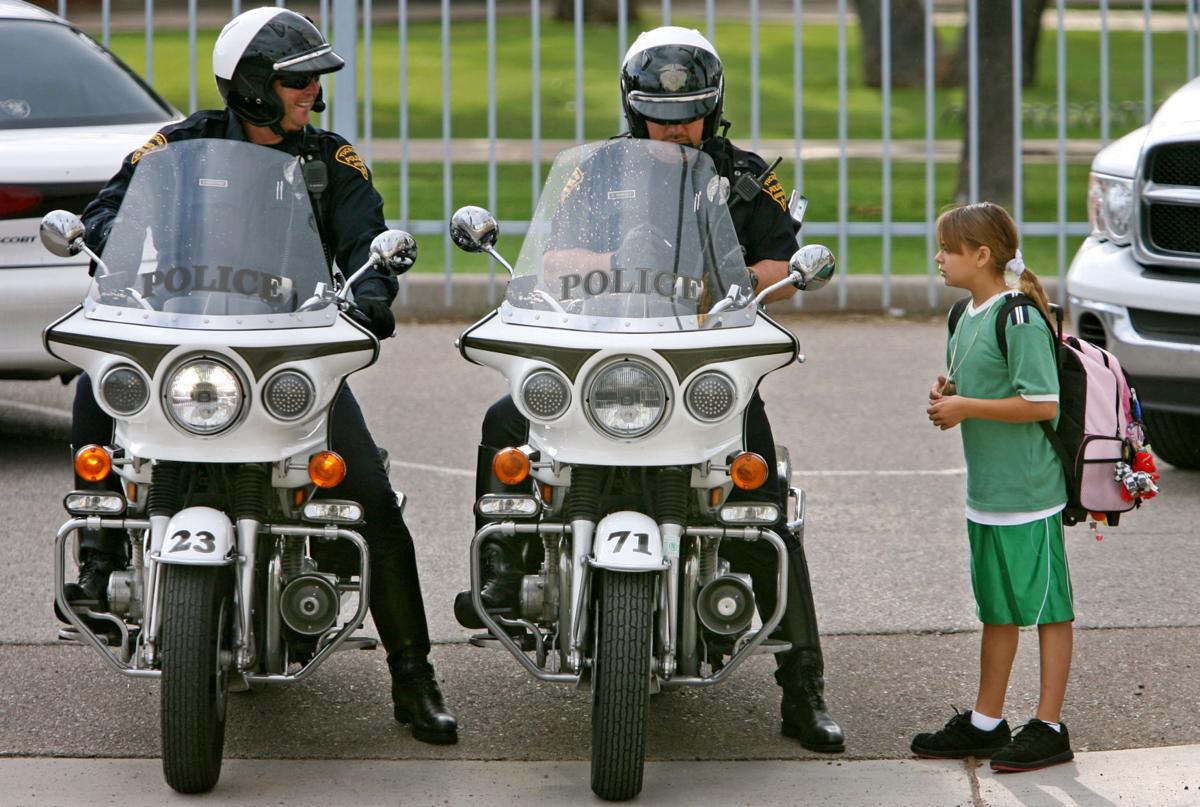 Tucson police traffic officers outside of Walter Douglas Elementary on the first day of school in 2006. 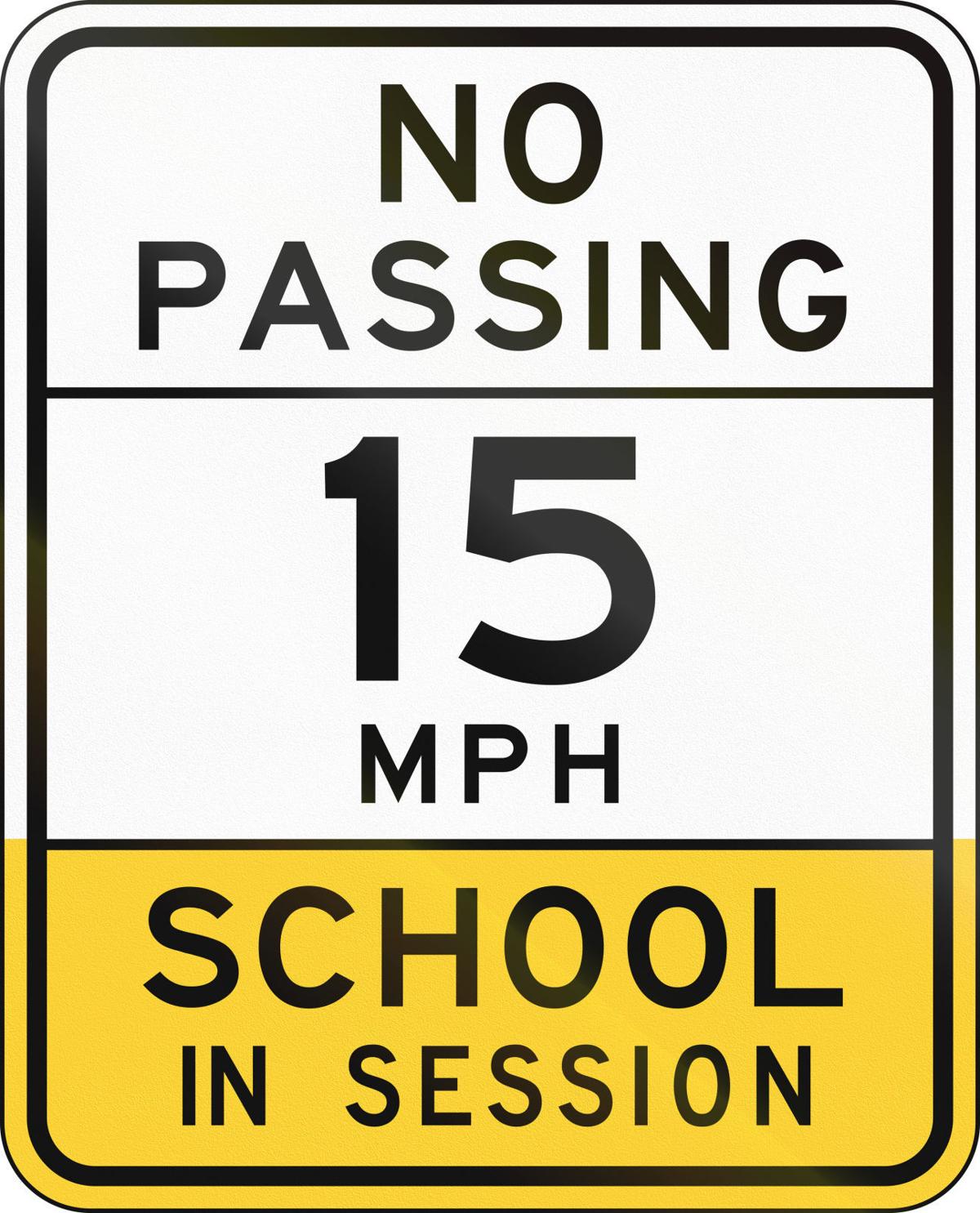 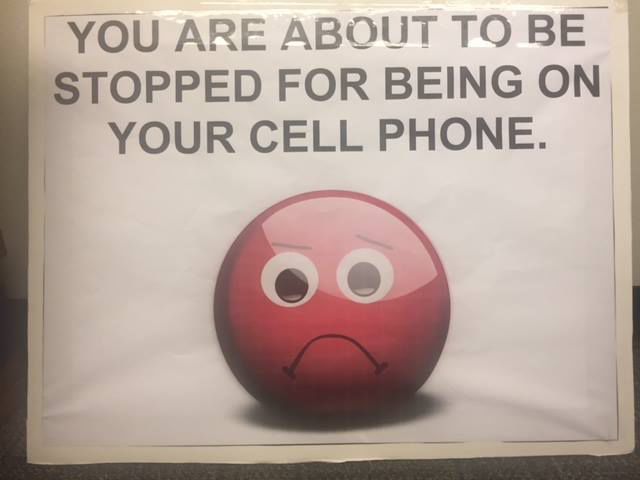 The other side of this sign says, “Have a blessed day.” A deputy flipped the sign to show this side when he saw someone violating the no-cellphone-while-driving law at La Cholla Boulevard and Wetmore Road.

More than 40 drivers passing through designated school zones found out the hard way earlier this month that looks can be deceiving.

The Pima County Sheriff’s Department set up a not-so-elaborate plan to catch motorists running stop signs and catching up on emails instead of keeping their eyes on the road at the intersection of North La Cholla Boulevard and West Wetmore Road.

For hours, an undercover deputy stood at one of the corners of the intersection, holding a sign that read, “Have a blessed day.” If the person were seen texting, the deputy would flip the sign over.

“You are about to be stopped for being on your cell phone,” it read.

The deputy would then radio a nearby colleague to pull the driver over.

Another undercover deputy was on the lookout for drivers rolling through stop signs.

In all, there were 43 traffic stops that day, including 28 stop-sign violations, eight seatbelt violations, five child-restraint violations and 16 people seen using their cellphones while driving.

Officials said several motorists were stopped and cited for entering a crosswalk while children were present and one mother was cited for driving with a small child on her lap.

Pima County Sheriff’s Department Sgt. Dawn Barkman said the program was the brainchild of the special unit division, born of repeated complaints about unsafe driving in the area.

“We definitely want to make sure to make the kids are safe,” she said.

She described drivers who had been pulled over as “chagrined” but understanding that they had violated the law.

“They just took the ticket,” she said.

The day at the intersection was dubbed a success and will be repeated in the coming weeks, she said.

Funding for the operation was made available through grants from the Governor’s Office of Highway Safety.

The poll gauged support for Arizona and local propositions, as well as school bonds and overrides.

The new flashing arrows are in place at some intersections between UA and I-10.

Sen. John McCain to be buried near best friend at US Naval Academy

ANNAPOLIS, Md. — It will be a fitting final resting place for a man who prized military service, cherished friendship and had little patience …

Tucson says goodbye to thunderstorms and welcomes back triple-digit temperatures

Chances for thunderstorms are slim this week.

Head of Tucson Chamber: With mining in city's blood, it's time to move ahead with Rosemont

The Tucson Metro Chamber is proud to support Rosemont.

Several items, including a car, were stolen from the home.

An influx of electric scooters could hit Tucson streets soon

City officials are prepared to seize the scooters as soon as they show up on Tucson streets.

A 51-year-old man who was hiking the Linda Vista Trail in Oro Valley was airlifted from the area before 11 a.m. Monday, officials say.

Final letter from Sen. John McCain: "Believe always in the promise and greatness of America"

“Do not despair of our present difficulties but believe always in the promise and greatness of America, because nothing is inevitable here. Americans never quit. We never surrender. We never hide from history. We make history."

PHOENIX — A judge on Monday rejected attempts by Arizona Public Service to keep a renewable energy measure it opposes off the November ballot.

Still have a mail-in ballot? Drop it off at the polls before 7 p.m.

Resident Roger Rosencrans has used his own money, and plans to spend more, to make his neighborhood street safer.

Motorists could be able to fight traffic tickets in court without — as they do now — automatically risking higher insurance rates if they lose.

Tucson police traffic officers outside of Walter Douglas Elementary on the first day of school in 2006.

The other side of this sign says, “Have a blessed day.” A deputy flipped the sign to show this side when he saw someone violating the no-cellphone-while-driving law at La Cholla Boulevard and Wetmore Road.