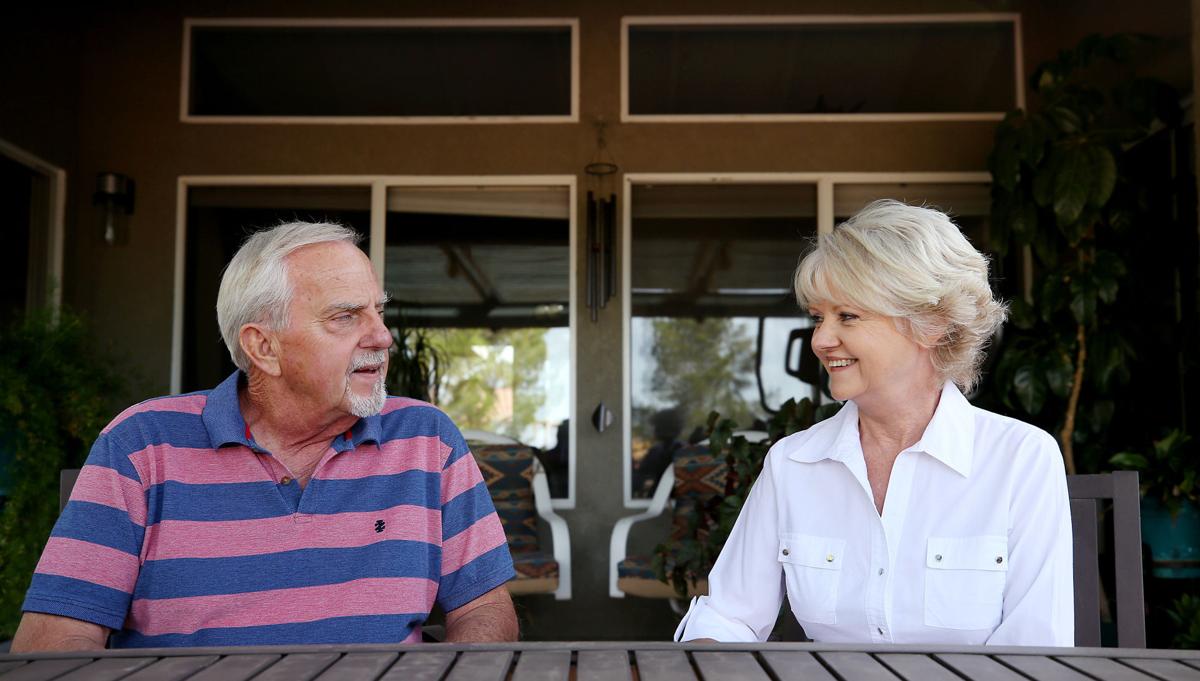 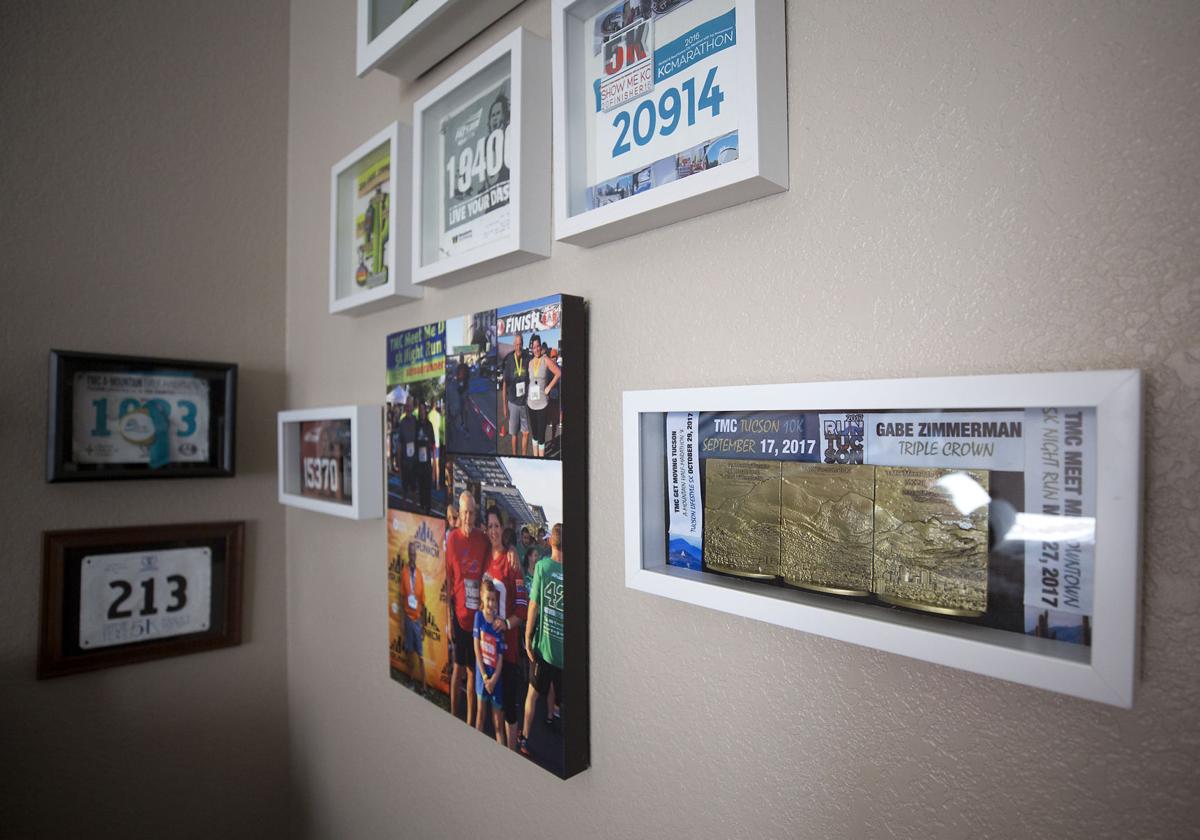 Gary Brauchla has run 17 five-kilometer races since recovering. He frames his medals and race bibs on the wall beside the bed where he “died.” Every time he wakes up he thinks, “Wow, I made it.” 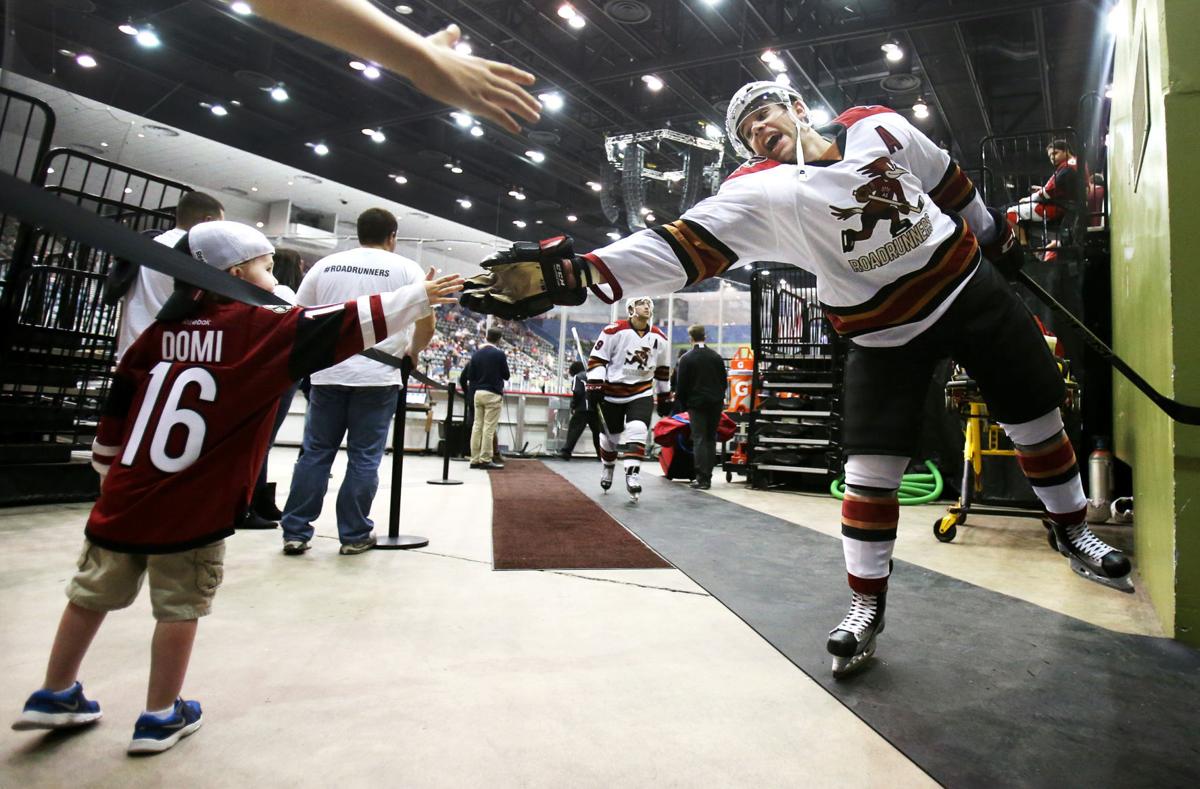 Gary Brauchla doesn’t remember much from the night his heart stopped beating.

His wife, Kathie, on the other hand, remembers hearing Gary let out a loud snort around 4 a.m. on Sept. 29, 2012. She thought he was snoring and gave him a shove, but he didn’t respond.

Kathie, who worked as a surgical technician for 18 years, quickly realized Gary was in trouble and started chest compressions. She called 911 and kept pushing his chest to keep blood flowing to his brain.

She started out standing next to him, but her arms grew tired as the minutes ticked by so she straddled him for better leverage. By the time the Sunsites-Pearce Fire District ambulance arrived and found Gary without a pulse, more than 10 minutes after Gary’s heart stopped pumping, she was pushing his chest with her elbows.

“All I did was lay there and die,” Gary said this week. “She never stopped. She never gave up.”

Paramedics used a defibrillator to start Gary’s heart and then flew him by helicopter from Pearce, a town about 90 miles east of Tucson, to Tucson Medical Center, where doctors put in stents to help blood flow and used therapeutic hypothermia to cool his body to 90 degrees, which lessened the risk of brain damage.

The doctors warmed him back up the next day, but he didn’t wake for 72 hours. He remained in a medically induced coma for more than two weeks.

When it came time to leave the hospital, he balked at the idea of returning home.

“I was afraid to come back here and get in that bed,” he said. “That was a kind of scary thing. That’s where I died.”

Instead, they stayed in Phoenix and visited with relatives for several days before heading back to Pearce.

Five years after his heart stopped while he slept, he’s grateful every time he wakes up in his bed.

Running for his life

One of the walls in the Brauchlas’ bedroom is covered with ribbons and certificates Gary earned from running 5K races.

“I ran 1.7 miles the morning I died,” Gary said. But running then was more of a pastime than a passion.

He now runs more than 600 miles each year, a practice that began in the months after his cardiac arrest when he drove to Tucson three times a week to work out in a rehabilitation center.

He had always wanted to run in a 5K race and his doctor gave him the green light. He ran his first 5K eight months after his cardiac arrest and has completed 17 more since then.

The Brauchlas celebrate Gary’s “rebirth day” every year on the anniversary of his cardiac arrest, which is different than a heart attack in that the heart stops beating unexpectedly as opposed to the blood flow to the heart being blocked.

Brauchla has a degree in industrial engineering and made a career as a homebuilder. After leaving the hospital, he used his engineer’s mind to understand cardiac arrest and how to deal with it.

He now teaches hands-only CPR, or “bystander CPR,” throughout Southern Arizona and serves as the president of the Arizona Cardiac Arrest Survivors, the second of its kind in the country. He also facilitates the Heart to Heart support group at TMC.

His message: “Just because you have heart problems doesn’t mean your life is over.”

One point of inspiration for Brauchla is the rise in cardiac arrest survival rates in the Seattle area.

Local officials pushed for more CPR training for Seattle-area residents and about 75 percent are trained, according to the American Heart Association. And more than 3,000 automated external defibrillators are registered with EMS and dispatch centers.

While the survival rate for bystander-witnessed cardiac arrest is around 10 percent nationwide, the Seattle area had a 62 percent survival rate in 2013, according to the heart association.

In Arizona, about 7,600 people died in 2014 from cardiac arrest, according to the Arizona Department of Health Services.

The out-of-hospital survival rate was 12 percent in 2016, which increased to 46 percent with the help of bystander CPR. The in-hospital rate was 25 percent.

At the Heart to Heart support group, Brauchla helps survivors and their families know “they are not alone,” said Dr. Lou Lancero, an interventional cardiologist at Pima Heart.

Due to better technology and techniques, such as induced hypothermia, the rate of survivors in cardiac arrests is “a lot better than when I started medical school 30 years ago,” Lancero said.

Some people survive cardiac arrest, but get depressed at the “reminder of how fickle life can be,” Lancero said. Other survivors, particularly those in their 50s and 60s, “often reassess what’s important in life.”

“They pursue whatever they think is more important than a paycheck,” Lancero said.

Tucson Roadrunners winger Craig Cunningham doesn't know why his heart stopped just before a game, but he knows his recovery is remarkable.

Dr. Michael J. Ackerman is a pediatric cardiologist at the Mayo Clinic

Trained in CPR? Get a smart-phone alert if someone nearby needs you

Residents trained in CPR can respond to give aid.

Study: Tucson ranks low on list of cities for veterans

Gary Brauchla has run 17 five-kilometer races since recovering. He frames his medals and race bibs on the wall beside the bed where he “died.” Every time he wakes up he thinks, “Wow, I made it.”