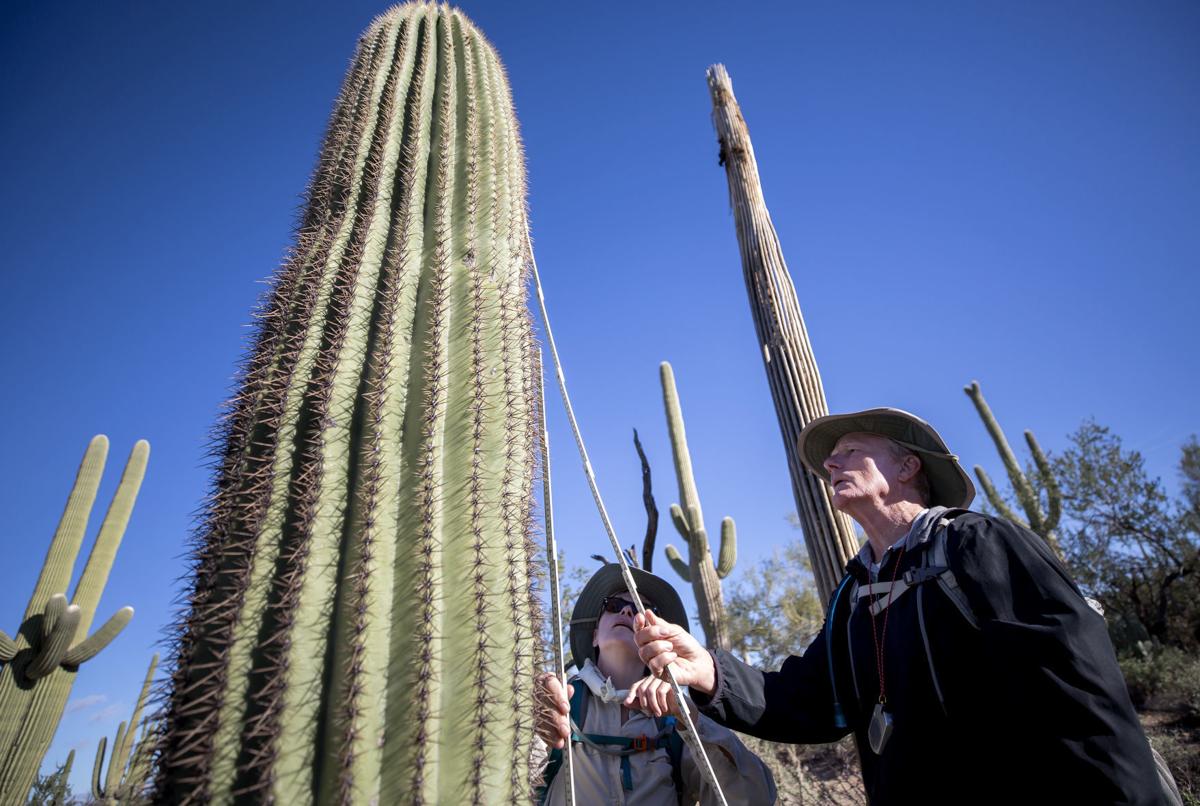 Judie Schumacher, center, and Craig Fobes use folding rulers to measure the height of a saguaro. With a combined estimated 1.8 million saguaros in Saguaro National Park’s east and west units, not even an army of volunteers can catalog them all. 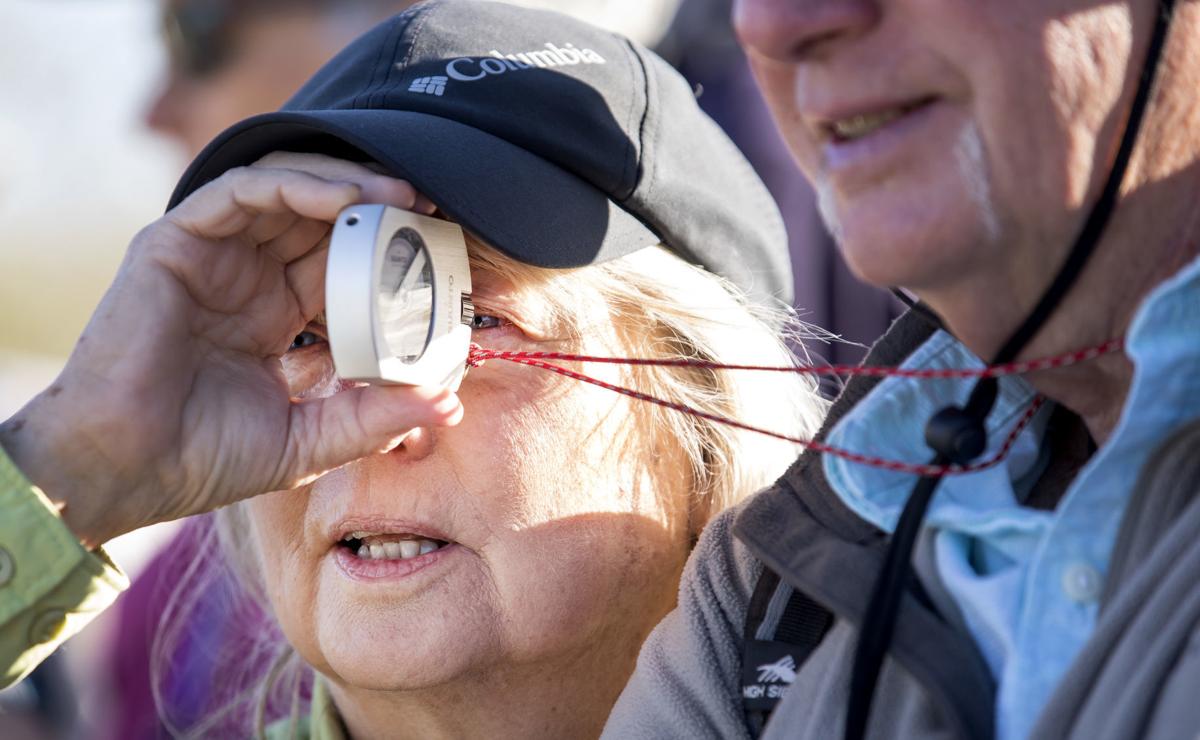 Using tape measures, clinometers and trigonometry, volunteers record the height of the saguaros they encounter. Here, Heidi Searle looks through a clinometer. 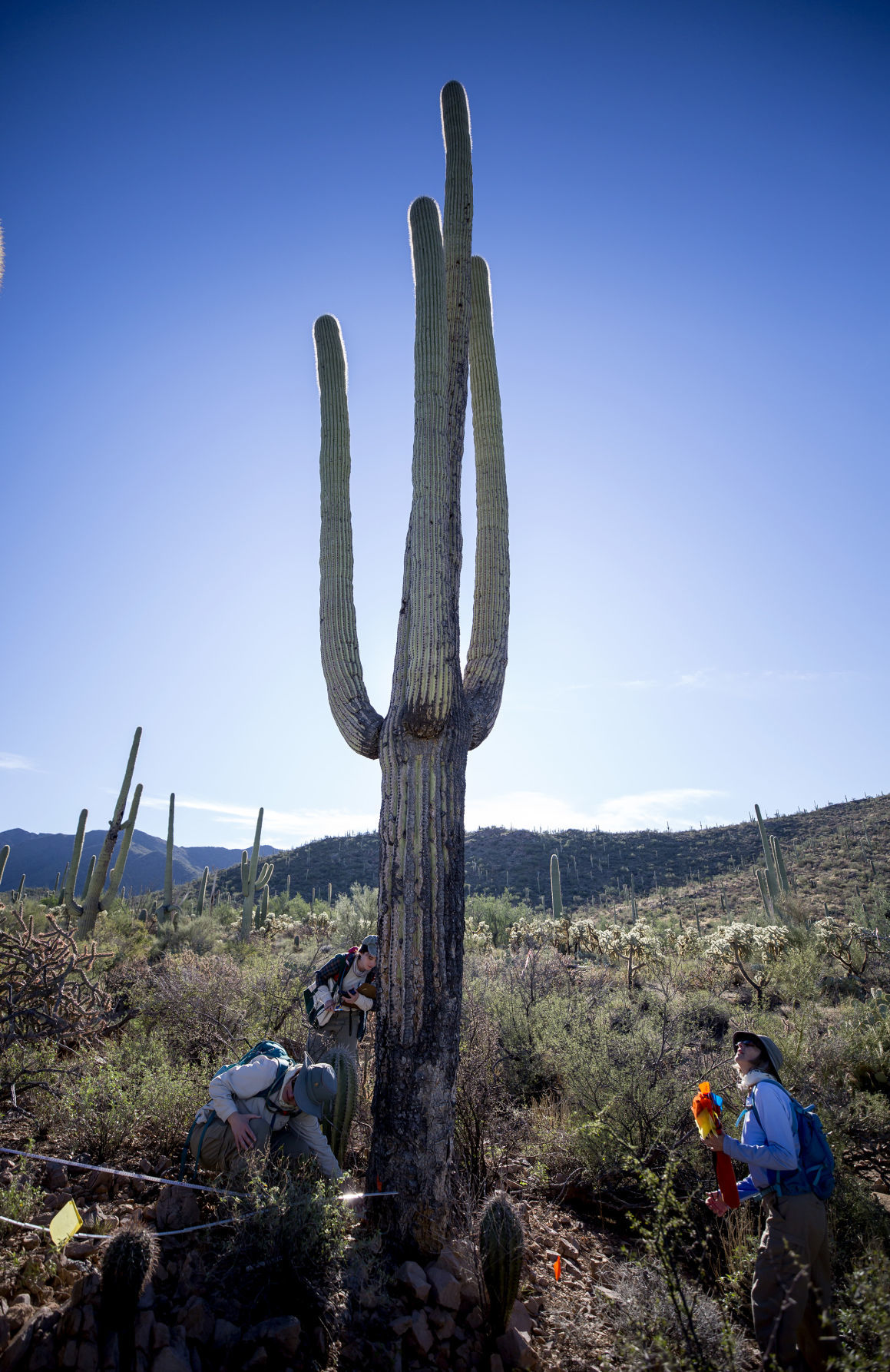 In 2010, the census team collected data on more than 20,000 individual cactuses, then used computer modeling to come up with a parkwide population of 1,896,030 saguaros. 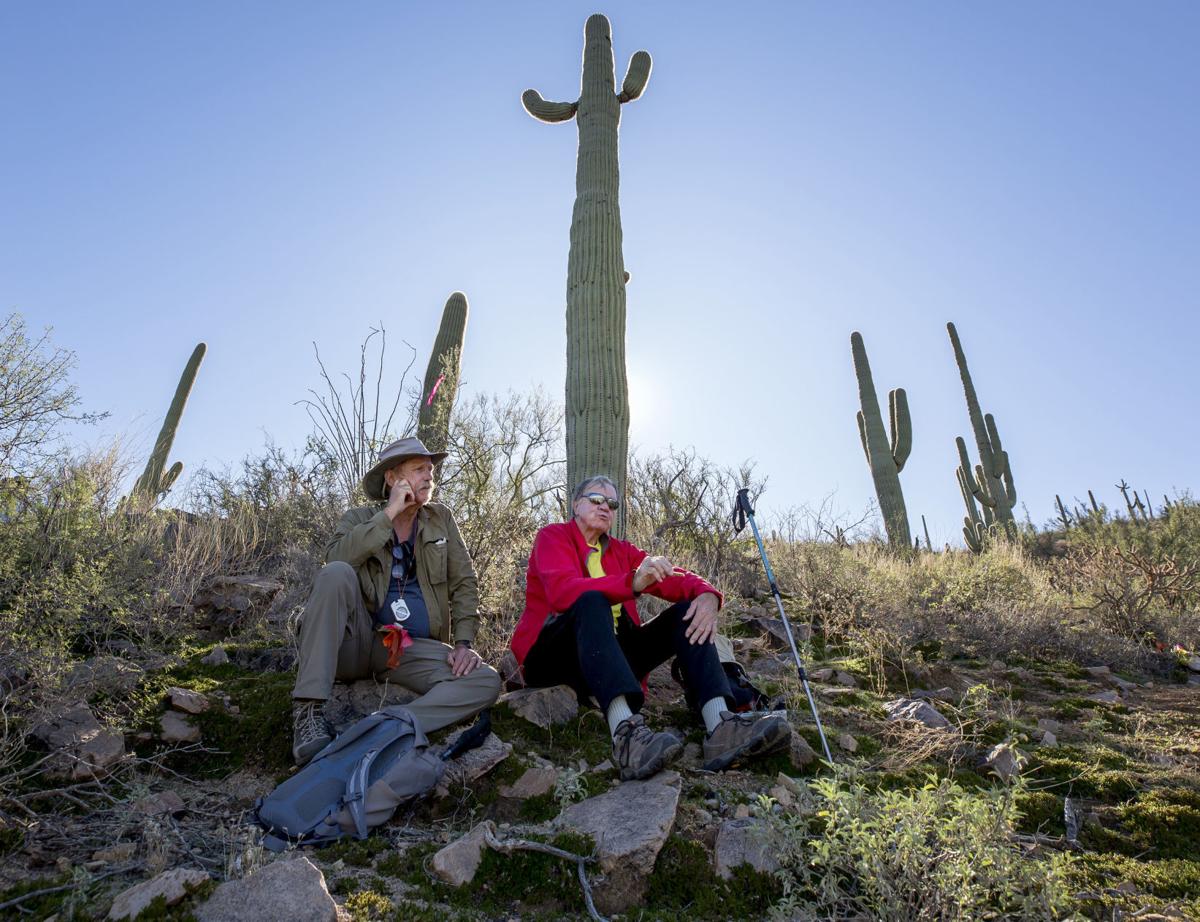 Bob Wilson and Bill McKeekin take a snack break while counting saguaros. They have plenty of help: More than 300 volunteers are believed to be pitching in.

The 2020 census is already underway in Southern Arizona, but the response so far has been dismal. The participants just stand there with their arms out, refusing to answer even basic questions.

Luckily, this is a saguaro census, so everyone gets counted no matter what.

“While the country is counting its people, we’re counting our saguaros,” said Don Swann, a biologist at Saguaro National Park since 1993.

The once-a-decade tradition began in 1990. The latest census got underway in October and is expected to continue into April.

Saguaro National Park covers more than 140 square miles, so Swann and his fellow census takers can’t count every cactus. Instead, they estimate the total population based on how many individual saguaros they find in 45 scientific plots — 25 in the park’s eastern district and 20 in the western district.

Each plot was selected at random 30 years ago and covers almost 10 acres.

The counting is done by a handful of park staff members and interns, with crucial help from an irregular army of volunteers.

“We’re looking for every saguaro”

On a recent Thursday, Swann and company were joined in the field by 19 snowbirds and RVers calling themselves the Desert Trails Hikers.

“It’s not so much an official group, just a bunch of friends,” said Judie Schumacher, a winter resident from Minnesota who organized the outing.

They met in the morning at the park’s Red Hills Visitor Center, where Swann delivered a quick safety briefing and an overview of the census.

“We’re looking for every saguaro,” he told them. “Once we find one, we flag it and take measurements.”

“We don’t have a citizenship question, do we?” joked volunteer Craig Fobes.

Swann asked the group to be especially watchful for any “baby saguaros” that might be hiding in the brush beneath the palo verdes and other nursery trees. A bumper crop of babies could signal the end of a desert drought cycle that dates to the Clinton administration.

“It’s been about 25 years since we’ve had a really good crop of (new) saguaros,” he said.

Swann’s safety briefing boiled down to this: “Be safe, collect great data and have a good time,” he said. “We want to make sure you all come back in one piece and with a minimal number of spines in you.”

After the pep talk, the volunteers piled into vehicles and caravaned down dirt roads to plot number 30, a patch of desert thick with jumping cholla at the heart of the park’s Tucson Mountain District.

There they counted and cataloged 234 saguaros over the course of several hours, using tape measures, clinometers and trigonometry to determine the height of each plant. They also logged the GPS coordinates, counted the number of arms and bird holes, and made note of any crests or other growth abnormalities.

The saguaros were temporarily marked with small, numbered flags to keep them from being counted twice.

Flag K33 went to the plot’s smallest cactus, a spiny nub 2.5 inches tall that probably sprouted more than a decade ago. Flag K18 went to the tallest saguaro of the day, a 41-footer with five arms and almost 200 years of history hanging from its ribs.

“We really are out here with these ancestral giants,” said Alexis Cardenas, a park service intern taking part in his first census.

The Desert Trails Hikers worked their way through about half of plot number 30 before quitting for the day. Another volunteer group walked the rest of the plot the following day, resulting in a grand total of 486 saguaros, 12 more than the 2010 census.

Swann said they’re seeing more decreases than increases in the plots they’ve counted so far this year, but it’s too early to say which way the overall population might be trending.

Census takers know they’re probably missing some of the smallest specimens, but those saguaros should show up in future counts a decade or two from now, assuming they live that long.

The famously slow-growing plants have a low survival rate early in life, when they are less drought-resistant and more vulnerable to being crushed, knocked over or snacked on. “Once they’re big enough to store water, they’re so resilient,” Swann said.

A long-term look at a long-lived plant

“Since the project started, we’ve seen a huge increase in the total number of saguaros, which has been really encouraging,” Swann said.

More than 300 volunteers helped with the 2010 census, and Swann expects at least that many to take part this time around. His calendar for the coming months is already crowded with cactus counters from conservation groups, high school classes, hiking and climbing clubs and the occasional family. He isn’t actively looking for any additional help.

“We don’t have a shortage of volunteers, which is great,” he said. “People want to come out and interact with saguaros one-on-one, and this is a way to do that with science.”

Swann said the data they’ve been collecting over the past three decades should still be useful 50 to 100 years from now, as future scientists continue to track the distribution, growth and adaptability of the Sonoran Desert’s iconic plant.

“Saguaros live longer than we do. In order to understand them you have to study them across generations,” he said.

So if you miss your chance to take part this time around, don’t be too disappointed. Swann expects many of the saguaros being counted now to still be standing there with their arms out when the census takers return in 2030.

Judie Schumacher, center, and Craig Fobes use folding rulers to measure the height of a saguaro. With a combined estimated 1.8 million saguaros in Saguaro National Park’s east and west units, not even an army of volunteers can catalog them all.

Using tape measures, clinometers and trigonometry, volunteers record the height of the saguaros they encounter. Here, Heidi Searle looks through a clinometer.

In 2010, the census team collected data on more than 20,000 individual cactuses, then used computer modeling to come up with a parkwide population of 1,896,030 saguaros.

Bob Wilson and Bill McKeekin take a snack break while counting saguaros. They have plenty of help: More than 300 volunteers are believed to be pitching in.