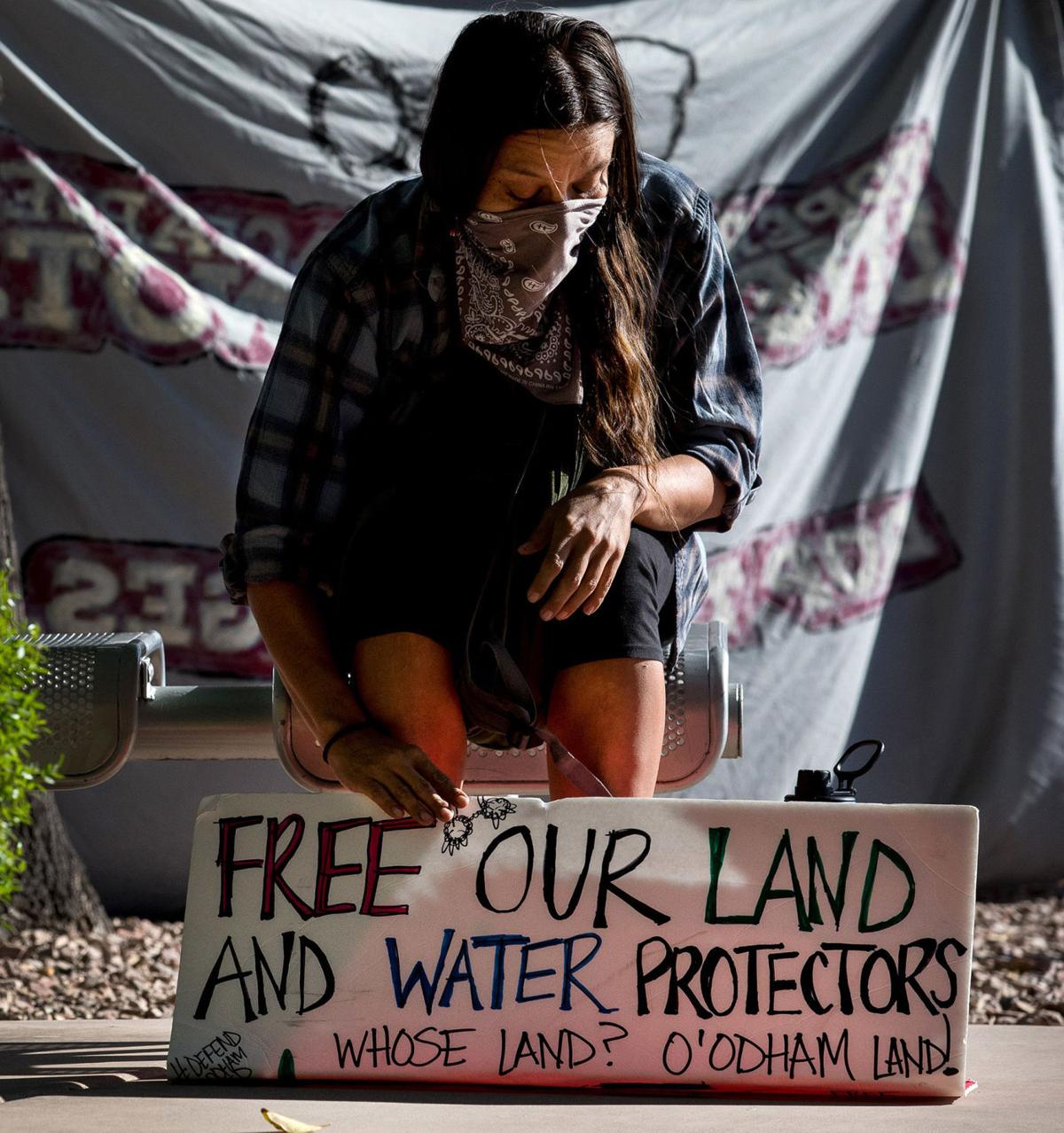 Supporter Nellie David sits on a bench with her sign during an Indigenous Peoples Day rally outside the Pima County Jail, 1270 S. Silverlake Road. About 35 supporters gathered there demanding those arrested be released.

A large flag is attached to a tree during an Indigenous Peoples Day rally outside the Pima County Jail, 1270 S. Silverlake Rd., in Tucson, Ariz., on October 12, 2020. About 35 supporters gathered outside the Pima County Jail demanding those arrested during a protest near Organ Pipe National Monument for Indigenous Peoples Day be released and treated with respect.

David Manuel was singing a traditional Tohono O’odham song when he was shot by rubber bullets and arrested Monday morning, supporters say.

Manuel was one of 12 people arrested on Indigenous People’s Day after protesters blocked traffic on Arizona 85 near an immigration checkpoint, voicing concerns about border wall construction and activity on O’odham ancestral land in Southern Arizona.

The Arizona Department of Public Safety gave protesters warning to clear the roadway before using tear gas to disperse the crowd. About a dozen were taken into custody, the Border Patrol said in a news release.

It’s the second time David Manuel has been arrested in border protests in recent months, said Vivian Manuel, his cousin.

She says seeing the border wall being built on sacred Tohono O’odham land is hurtful and that the protests so far have been unable to make it stop.

A video of the incident posted online by Rafael Samanez, shows state troopers marching toward protesters. In the video, troopers pull supporters out of their vehicles on the side of the road to arrest them. At one point, four troopers hold a protester down, as they place handcuffs on him.

The O’odham Anti Border Collective released a statement about Indigenous People’s Day action, describing their plan to “peacefully, in prayer and spiritual ceremony, block a border patrol checkpoint on unceeded O’odham lands in resistance to the daily violence committed by border patrol against O’odham lands and peoples.”

“Everyday is Indigenous People’s Day, and we are here to remind the world that this is, was, and always will be Indigenous O’odham Land, and we will do what is necessary to protect it” the statement said.

In a statement published after the arrests, the O’odham Anti Border Collective said Border Patrol at the protest took children from their parents.

“It’s obscene and offensive to us that local and state governments move to celebrate Indigenous Peoples’ Day while the federal government blows up our sacred sites, steals our kids, militarily occupies our communities and shoots at Native Americans praying to protect our land and ancestors from desecration,” the statement continues, attributing the comment to an unnamed O’odham “auntie” who was at the Monday morning ceremony.

On Monday afternoon, about 35 people waited outside the Pima County jail, singing songs and showing their support for those who were arrested at the protest. Lavender, copal and sage burned from inside a shell on a table outside the jail.

About 3:30 p.m., an organizer and member of the Tohono O’odham Nation told supporters that they were expecting the protesters to be released by early evening.

Several people outside the jail declined to give their name for publication.

“This is humble people taking care of the land that is very fruitful and giving us a way of life and a means of life and opportunity to live life,” one person said.

Border wall construction is hurting plants, animals, natural water sources and the ecosystem, said some of the people outside the jail.

Where sections of the new border wall are in place, wildlife advocates already have seen javelina, bobcats, and other animals spend hours struggling fruitlessly to find a way through the wall.

Supporter Nellie David sits on a bench with her sign during an Indigenous Peoples Day rally outside the Pima County Jail, 1270 S. Silverlake Road. About 35 supporters gathered there demanding those arrested be released.

A large flag is attached to a tree during an Indigenous Peoples Day rally outside the Pima County Jail, 1270 S. Silverlake Rd., in Tucson, Ariz., on October 12, 2020. About 35 supporters gathered outside the Pima County Jail demanding those arrested during a protest near Organ Pipe National Monument for Indigenous Peoples Day be released and treated with respect.