Pima County Constable Deborah Martinez-Garibay was killed Thursday while serving an eviction notice at Lind Commons Apartments after only five months on the job.

The 43-year-old was appointed by the Pima County Board of Supervisors as constable for Justice Precinct 8 in midtown Tucson to replace former Constable Kristen Randall after her resignation. A constable’s job entails serving legal summons such as eviction notices and protection orders from the justice courts to residents.

Martinez-Garibay served 16 years in the Army and ran the Tucson chapter of an adaptive golf program for veterans called PGA HOPE.

In March, Martinez-Garibay told the Star she wanted to become a constable for the same reason she joined the military shortly after 9/11.

According to a January 2022 article from PGA, Martinez-Garibay worked as an intelligence specialist in the Army, and upon her retirement, she immersed herself in work helping other veterans and “threw herself into her newfound love with the same intensity with which she’d thrown herself into her military career.”

“How could I not turn around and see my fellow soldiers, where they’re at, and not pull them along with me?” Martinez-Garibay told PGA. “That would be like a slap in the face to all the people who have helped me. There have been so many people before me who laid the groundwork, and it’s now my job to build on top of it.”

The Pima County Constables closed their office Friday in honor of Martinez-Garibay and said in a statement:

“We lost one of our own yesterday and we are devastated. May all the family, friends, and colleagues of Constable Deborah Martinez know that we hold them all in our hearts and that we grieve with them. We all know that the job of an Arizona Constable comes with risk, but we go about our business with caution and professionalism and treat all with whom we come in contact with respect and dignity. The Constables and office staff work in service to the people of Pima County and Arizona. Constable Martinez gave her life in that service and we honor her for her dedication to duty and public service. May she rest in peace.”

Martinez-Garibay was married and had an adult daughter.

The county’s constables have faced some criticism for varying approaches to the job — which range from a social worker to law enforcement-like approach — and some have called for change to the process of serving legal papers.

Previous County Administrator Chuck Huckelberry suggested in an October 2021 memo that the elected officials take a pay cut or be replaced with county employees. The suggestion was based on a report from Assistant County Administrator Mark Napier, who found uneven workloads among the constables and that “citizens being evicted from their homes are treated differently based on where they reside within boundaries on a map.”

According to Napier, who is retiring and had his last day on the job Friday, the county has “made progress on developing written policies and procedures for the constables that professionalizes the office and makes the dispensation of their duties more consistent. So I think real progress has been made over the last year or so.”

Martinez-Garibay was set to face current Justice Precinct 5 Constable Bill Lake in the November election to serve two more years in her position.

Constables are elected officials whose roles are governed by state law. Although constables can carry firearms if they are state-certified officers, they are not part of any law enforcement office, but instead work as peace officers through the justice courts. It was not known if Martinez-Garibay was carrying a firearm at the time of the shooting.

Supervisor Matt Heinz, who’s questioned the role of a constable throughout his time on the Board of Supervisors, suggested the tasks constables carry out should be in the “hands of the sheriff’s department and the various municipal law enforcement authorities.”

“First and foremost, what a horrible tragedy for our community to lose a public servant,” Heinz said. “Maybe this will be an impetus to look at this. I certainly think it should be, that we look at lobbying our Legislature to give the county the authority to elect not to have constables do this role.”

“I think that’s the safest way to go. I don’t want constables knocking on doors, putting themselves in harm’s way. I don’t want this to ever happen again, to any public servants in the county or the state.”

Nicole Ludden joined the Arizona Daily Star in 2021. She earned her bachelor’s degree in journalism at ASU’s Cronkite school in 2020 and covers local government issues.

Collection: Latest updates on the Aug. 25 shooting that left 4 dead in Tucson

Tucson police: Man being evicted killed constable, 2 others before killing self

Police identified the shooter as Gavin Lee Stansell, 24, who was being evicted for threatening a neighbor with a gun.

Deborah Martinez, an Army veteran, will take over as the constable for Justice Precinct 8.

Constable Kristen Randall has taken a housing-first approach to her job, providing tenants advanced notice of their evictions and informing them of available assistance.

A county report says constables take varying approaches to the job and have uneven workloads.

On August 27, the 18-year-old was apprehended by the United States Customs and Border Protection Officers at the Nogales Port.

The family of Deborah Martinez-Garibay, the 43-year-old Pima County constable killed in a shooting Aug. 25, shared memories of her Sunday morning.

It is unlikely that the boy’s parents will face charges in the incident, which remains under investigation, a sheriff’s spokeswoman said.

Elijah Miranda, 25, sought relief from his swamp cooler at home when a gunman killed him and two others at the Tucson apartment complex he was visiting.

Constable Deborah Martinez-Garibay and two others were killed a week ago.

The family, friends and colleagues of Pima County Constable Deborah Martinez-Garibay, who was killed Aug. 25 in Tucson, gathered for a funeral… 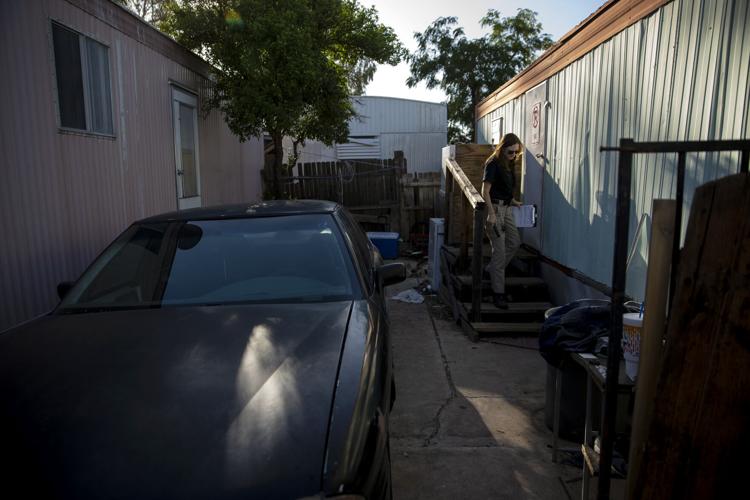