Sold as kids, their lives now converge
Share this
1 of 4 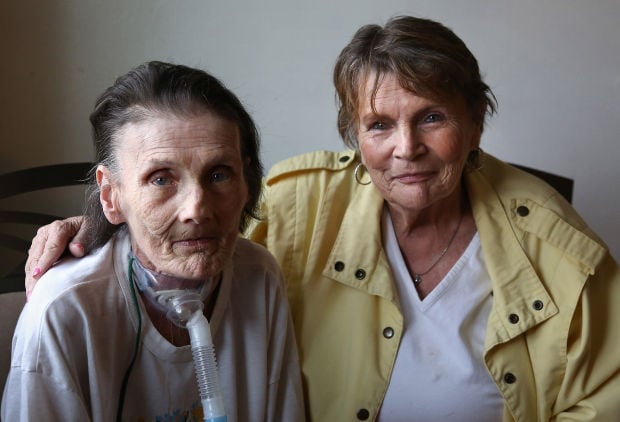 Sue Ellen Chalifoux, left, and her sister Rae Anne Chalifoux were reunited at Sue Ellen's home in Hammond. The women and their siblings were sold as children and their family was broken apart. 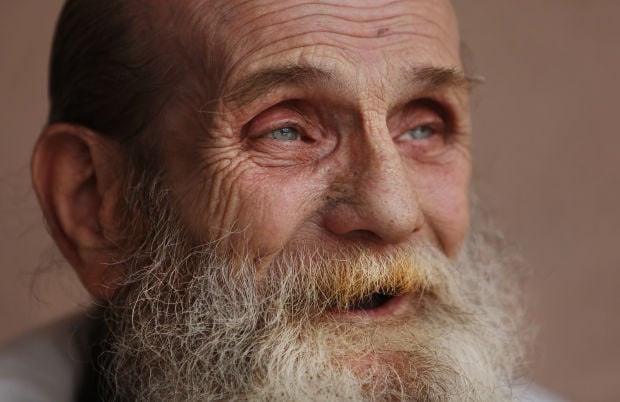 Milton Chalifoux speaks to a reporter from his apartment home on Friday, July 5, 2013, in Tucson. 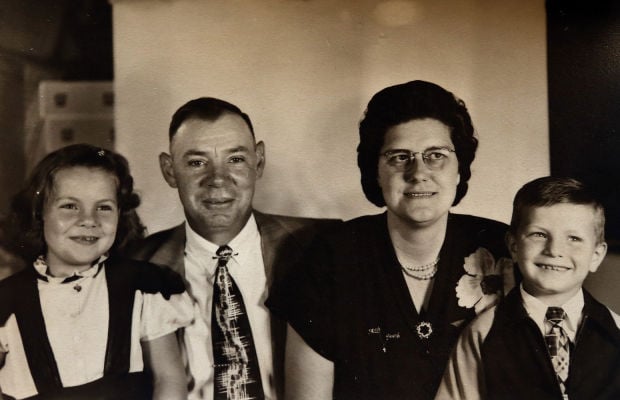 Rae Anne Chalifoux, left, and her brother were sold to the Zoeteman family. 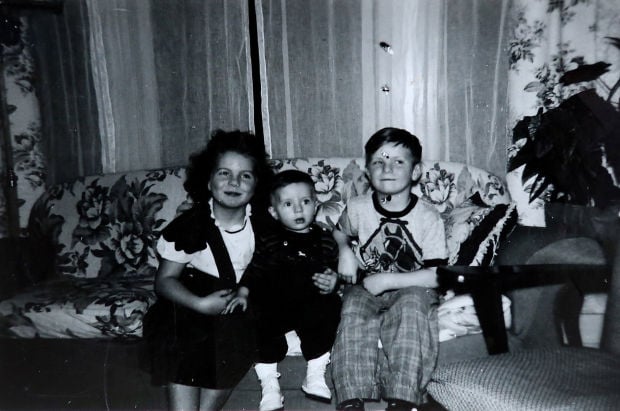 HAMMOND, Ind. - RaeAnn Mills bobbed a brush in a bottle of nail polish the color of a Barbie doll box. She took her sister's hand and smoothed a thin layer of "Pink Forever" over each nail.

Mills is 70. Her sister Sue Ellen Chalifoux is 67.

It was the first time they bonded over painting nails, a moment sisters usually share as girls. But the women never had the chance. They were 7 and 4 when life pulled them apart, and they say their reunion in May was only their second interaction since they were children.

A picture that made its way into newspapers in 1948 tells a piece of their story. In the image, four small children sit huddled on steps outside a home in Chicago behind a sign that reads "4 Children For Sale Inquire Within." Their mother - pregnant, and wearing a floral dress - turns her head and shields her face from the camera. Mills and Chalifoux are two of the girls in the picture.

Within two years, the children were separated and grew up apart.

Then, one weekend in early May, Mills and her son Lance Gray traveled from their home in Washington, Ind., to visit Chalifoux at the Hessville home she shares with her son, Timothy Charnote. They arrived with dozens of old photos and trinkets, fodder for storytelling.

"It's one of the happiest days of my life," Mills said.

The reunion was bittersweet. Chalifoux is dying from lung disease. She cannot swallow food or talk. She spent all of June hospitalized and is on a ventilator.

Before she dies, she wants people to know the story behind the photo.

When Charnote was a child and acted up, his mother would warn him to be good or she would sell him, just like her mother sold her. He thought she was being facetious.

Then he saw the photo.

It was published in The Vidette-Messenger of Valparaiso on Aug. 5, 1948, with the caption, "A big 'For Sale' sign in a Chicago yard mutely tells the tragic story of Mr. and Mrs. Ray Chalifoux, who face eviction from their apartment. With no place to turn, the jobless coal truck driver and his wife decide to sell their four children. Mrs. Lucille Chalifoux turns her head from camera above while her children stare wonderingly. On the top step are Lana, 6, and Rae, 5. Below are Milton, 4, and Sue Ellen, 2."

No one knows how long the sign stood in the yard. Some family members claim the mother was paid to stage the photo.

The photo was also published in newspapers in Ohio, Wisconsin, Michigan, New York, Pennsylvania, Iowa and Texas, among others, said Linda Herrick Swisher, public information coordinator for the Hammond Public Library. A story several days later in the Chicago Heights Star said a woman there offered to open her home to the children and that offers of jobs, homes and financial assistance poured in.

Two years after it appeared, the children went in different directions.

Mills' birth certificate shows she was born at her mother's home near 91st Street and South Commercial Avenue in South Chicago. She still has the brown-and-white checkered dress she wore and the torn green corduroy pants her brother Milton Chalifoux wore the day they went to live with John and Ruth Zoeteman on their farm in DeMotte.

It was Aug. 27, 1950, and Mills claims she was sold for $2 so her mother could have bingo money and because the man her mother was dating did not want children.

Her brother was crying nearby, so the couple took him, too, Mills said.

With the help of her son, Mills has been using social media to reconnect with her siblings and build new connections with extended kin.

"I want to find family before I die," she said.

During that search, the photo surfaced. "My brother (Milton Chalifoux) in Tucson somehow sent it to my email," she said. "I got on there and said, 'Good God. That's me.'"

She doesn't remember the picture being taken and has no recollection of her birth father. She said the Zoetemans raised her in an abusive, loveless home.

"They used to chain us up," she said. "When I was a little child, we were field workers."

Mills said when she was in her late teens, she was kidnapped, raped and got pregnant. She was sent to Michigan to a home for unwed mothers and brought the baby girl back to DeMotte, but the baby was taken from her and placed for adoption.

Mills said she reunited with her birth mother when she was 21, but it wasn't a pleasant experience. Her mother expressed no remorse or regret. And she showed no love, Mills said.

Mills felt one expression of love from John Zoeteman. It came on his deathbed. He asked her for a hug, the only one she ever got from him, she said. Then he told her, "I really did love you."

David McDaniel was in his mother's womb when the photo was taken. Now 63, he is organizing a sibling reunion in the fall in Washington state, where he lives and works as a truck driver.

He was born Sept. 26, 1949, as Bedford Chalifoux. Records he released to The Times show he was legally adopted by Harry and Luella McDaniel, who changed his name to David McDaniel.

The records show the McDaniels had custody of him since July 16, 1950. When he was taken from his birth mother, he was in bad shape.

"I had bedbug bites all over my body" he said. "I guess it was a pretty bad environment."

McDaniel grew up in Wheatfield, a couple miles away from his siblings RaeAnn Mills and Milton Chalifoux. From time to time he would ride over on a bike or horse to visit.

"They'd be tied up in the barn," McDaniel said. "They were badly abused."

He would untie them and leave before he was caught, he said.

McDaniel said he was a rebellious teen, despite living a pretty good life. His adoptive parents taught him good morals and values. It was a strict Christian home, and he ran away at 16 1/2, spent 20 years in the military and has been driving a tractor-trailer in Washington ever since.

On leave from the Vietnam War in 1969, he reunited with Mills and did so again in 1982. Their birth mother had remarried.

"She got rid of all us children, married someone else, had four more daughters," he said. "She kept them. She didn't keep us."

Phone calls placed to the youngest four daughters, seeking comment for this story, were not returned.

McDaniel said he saw his birth mother after he became an adult.

"As soon as my mom seen me, she said, 'You look just like your father,'" McDaniel said. "She never apologized. Back then, it was survival. Who are we to judge?"

"We're all human beings," he said. "We all make mistakes."

"There's a lot of things in my childhood I can't remember," Milton Chalifoux said. And much of what he does, he'd rather forget.

He joined his sister Mills living on a DeMotte farm with John and Ruth Zoeteman, who changed his name to Kenneth David Zoeteman.

He said he was diagnosed with schizophrenia and having fits of rage in the mid 1960s .

He met his birth mother only once as an adult, staying with her for a month in 1970. She threw him out when he got into a fight with her second husband, and the police arrested the husband.

"My birth mother, she never did love me," he said. "She didn't apologize for selling me. She hated me so much that she didn't care."

The siblings don't know much about their sister Lana's upbringing, but they are connecting via social media to her family. They want to learn more about her life.

"I never even got to know my sister Lana because she died in 1998 of cancer," Mills said.

As for Sue Ellen, she was adopted and raised not far from her original home. She grew up on Chicago's East Side neighborhood, attending St. Francis de Sales High School, her son said.

Too sick to talk, Chalifoux scribbled answers on paper during an interview with The Times in May. She was grateful to be reunited with Mills.

Then she shared her opinion of her birth mother.

What are ‘15-minute cities’ and how will they change how we live, work and socialise?

What are ‘15-minute cities’ and how will they change how we live, work and socialise?

How the airline industry is approaching employee vaccinations

How the airline industry is approaching employee vaccinations

Milton Chalifoux had already experienced enough heartbreak to last a lifetime when he was dealt one more blow last week.

Sue Ellen Chalifoux, left, and her sister Rae Anne Chalifoux were reunited at Sue Ellen's home in Hammond. The women and their siblings were sold as children and their family was broken apart.

Milton Chalifoux speaks to a reporter from his apartment home on Friday, July 5, 2013, in Tucson.

Rae Anne Chalifoux, left, and her brother were sold to the Zoeteman family.