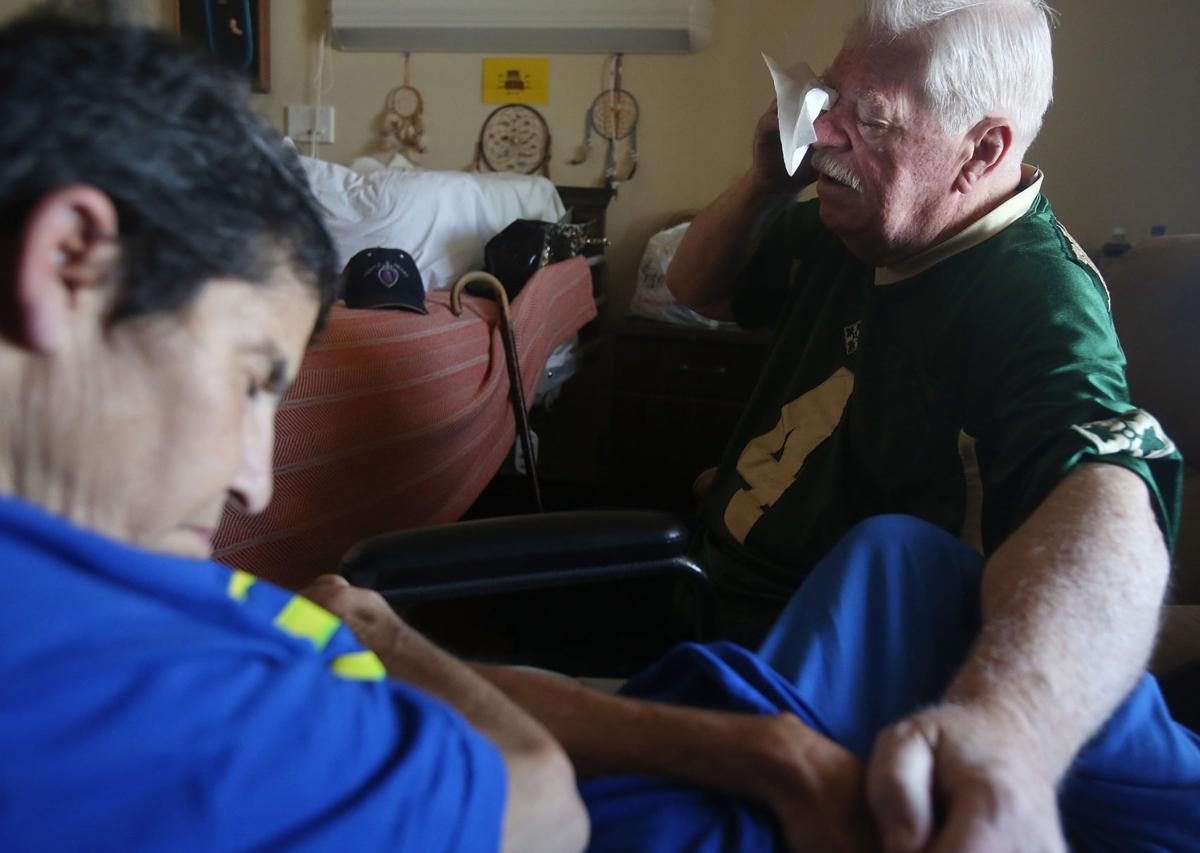 Toby Van Skike, right, is overwhelmed with emotion while visiting with Fran Cappadocia earlier this month. Cappadocia was Van

Skike’s nurse when he was injured in an explosion during the Vietnam War. Four months ago, the two were reunited for the first time. 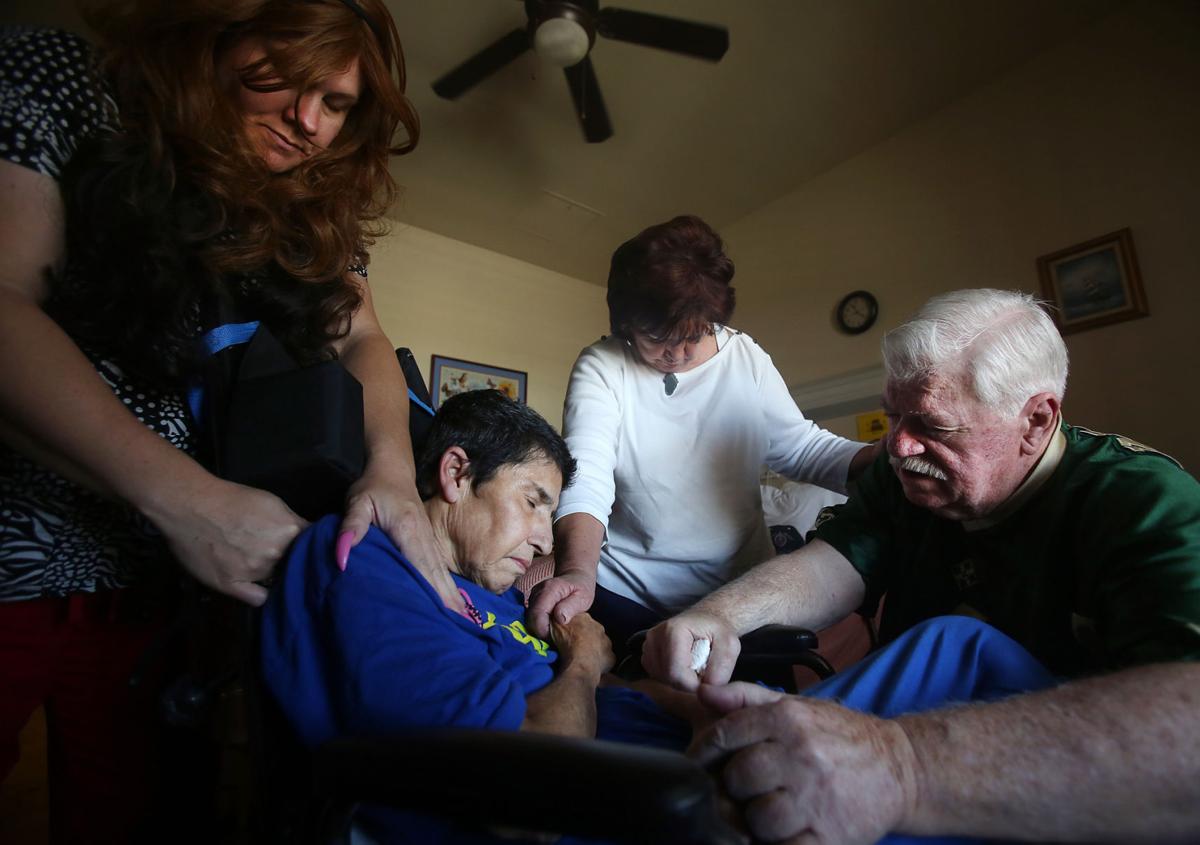 Toby Van Skike, far right, leads a prayer with Sue Pennington, second from right, and caregiver Jenny Beals, far left, for Fran Cappadocia at the end of his visit with Cappadocia at the Arizona State Veteran Home. Van Skike, who was nursed back to health by Cappadocia in Vietnam in 1968, says he “never forgot her.” The two were reunited in January. 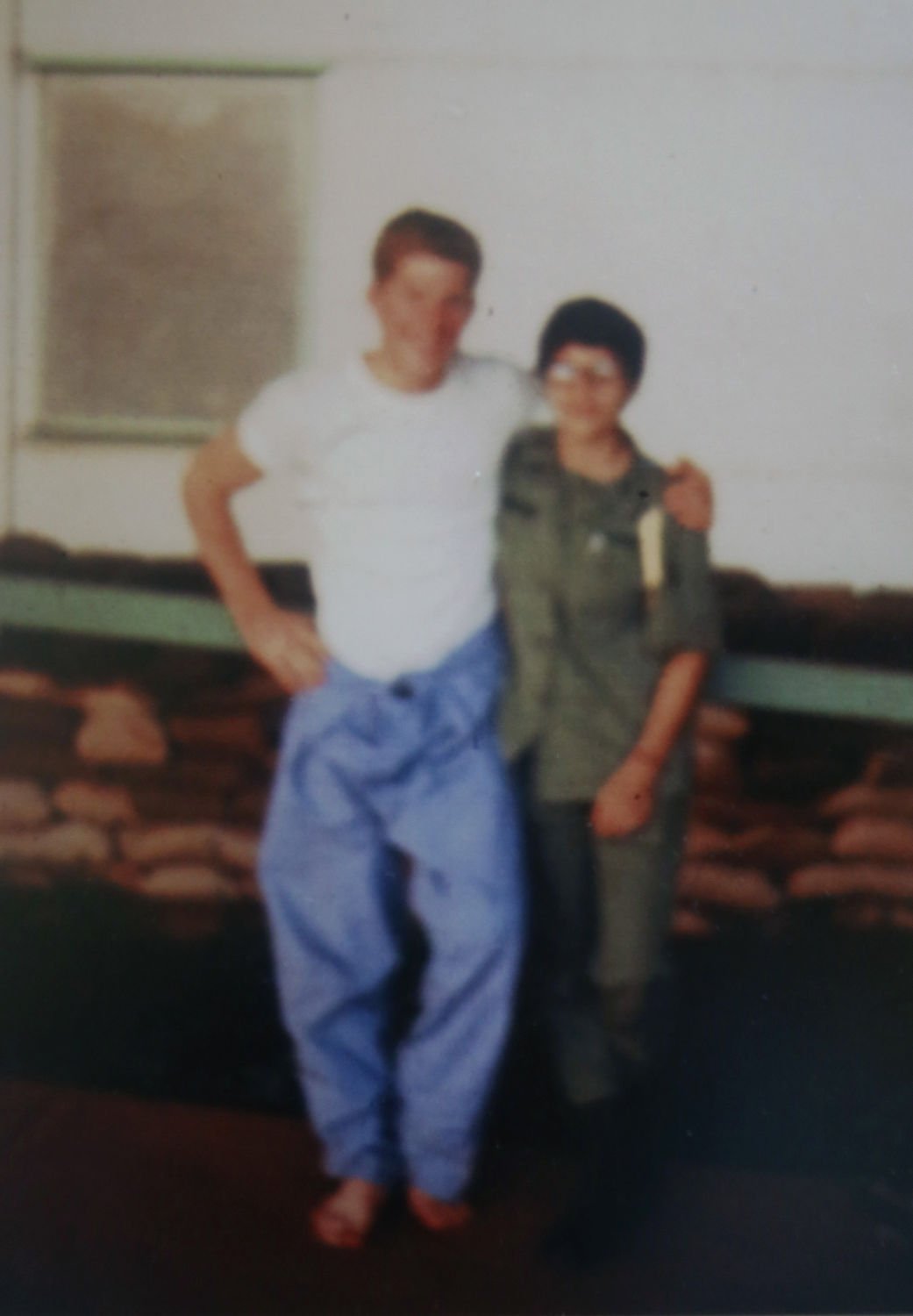 Pfc. Toby Van Skike, left, with his nurse, 1st Lt. Fran Cappadocia, after Van Skike was wounded on April 26, 1968, while serving in the Vietnam War. 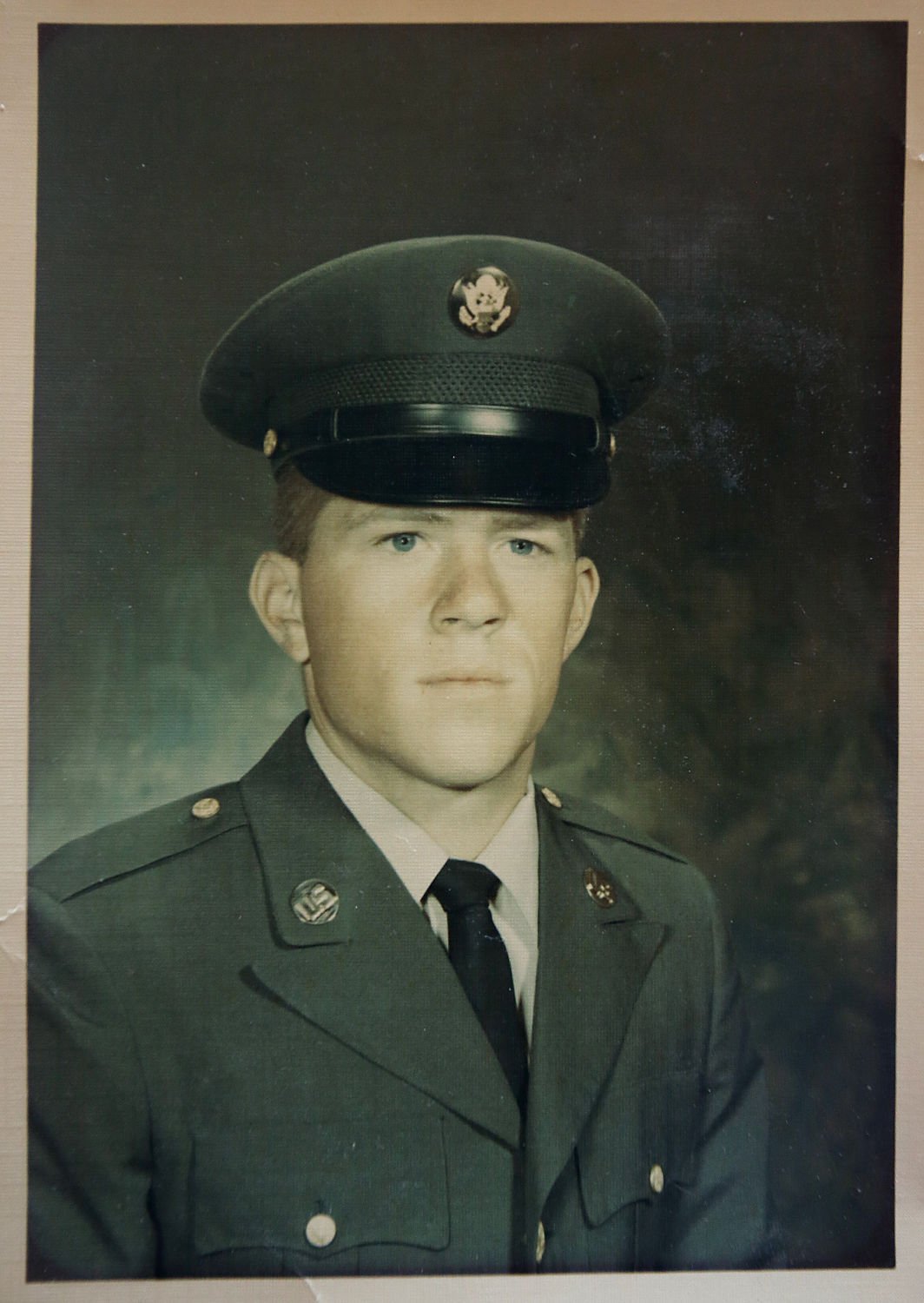 Van Skike was injured by a piece of shrapnel from an explosion in Vietnam. 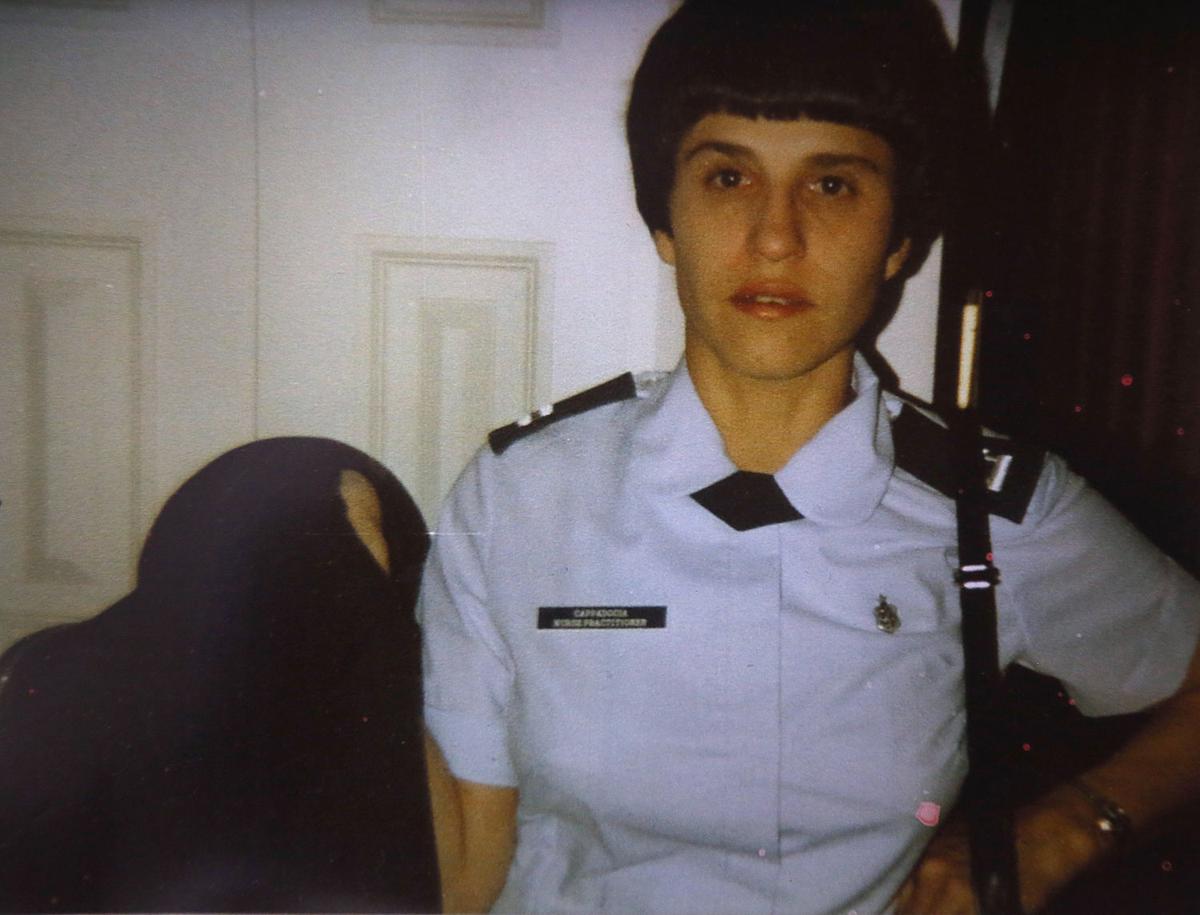 years in the military before retiring in Tucson.

Toby Van Skike never forgot the nurse who hustled him to safety as warning sirens screeched through the 71st Evacuation Hospital in the Pleiku area during the Vietnam War.

First Lt. Frances Cappadocia, a 20-something registered nurse, helped the wounded, 19-year-old soldier crawl under his bed with his mattress wrapped around him. The bedding, along with crates full of dirt, provided additional protection during rocket attacks.

For almost 50 years, Van Skike remembered Cappadocia, one of the nurses who cared for him in Vietnam. He always planned to find her someday.

In January, he did.

Cappadocia, now 71, joined the U.S. Army as a registered nurse in 1967 — the same year Van Skike volunteered for service.

She chose to serve in Pleiku, in a hotly contested and strategically important area.

“She was there during the height of the war,” says Sue Pennington, Cappadocia’s partner. “I never knew what that was like for her at all because she never would talk about it.”

The stress of that job triggered what Pennington, a clinical nurse specialist in mental health who worked at several Veterans Affairs hospitals, always knew lurked beneath Cappadocia’s competent exterior. The women met around 1969 while earning their bachelor’s degrees in nursing at the University of Alabama at Birmingham.

“I worked at the VA for 32 years,” says Pennington, 74. “I know what post-traumatic stress disorder is, and I knew Fran had it, but she would never talk about it, ever.”

Cappadocia agreed to go to therapy only if Pennington would accompany her. There, Pennington learned about late-night panic attacks and nightmares of bodies with bugs in the eyes.

“Fran is so stoic,” Pennington says. “I never knew she would wake up in the middle of the night feeling panic attacks, feeling like she was going to die.”

Therapy also helped her overcome the shame tied to her time in Vietnam.

“She was one of those people who, when the plane landed, people screamed at them, ‘Baby killer! Baby killer!’ and threw tomatoes,” Pennington says. Therapy “helped her go from being ashamed to being very proud.”

Still, war left its mark. About four years ago, Pennington began to see a change. Then, after a bad fall about two years ago, Cappadocia’s care coordinator at the VA recommended that she move somewhere such as the Arizona State Veteran Home-Tucson.

“It was the worst day of my life to do that,” Pennington says.

Cappadocia no longer walks or speaks, though Pennington still sees flashes of recognition in eye contact and hand squeezes.

Dr. Priti Sinha, a psychiatrist who works with Cappadocia at the Southern Arizona VA Health Care System, says that while the two conditions are distinct and unrelated, their symptoms may overlap in the beginning. Both can inhibit daily life as they progress.

After a series of law enforcement and government jobs, mostly in California and Washington, Van Skike, 66, retired and hit the road, with long-term plans to settle in Washington. He moved to a home near Benson about 20 years ago, at the request of his aging parents.

His memories of Vietnam are still sharp — the explosion that embedded a piece of shrapnel in his knee, the doctor who failed to remove the metal and sewed him up instead, the blood poisoning and streaks of red stretching up his torso, the huddle of hospital officials whispering about his injury, the word he picked out of that hushed conversation: “amputation.”

“I got a penicillin shot for breakfast, lunch and dinner because I was so infected,” he says.

He remembers one day when Cappadocia gave him a shave instead of a shot.

“She looked at me and said, ‘I don’t care if you are 19, you don’t need to be looking this scruffy,’” Van Skike says. “She proceeded to shave my baby face, and I winked at her.”

Van Skike admits to having a crush on the young nurse. He still has a photograph of the two of them outside the hospital.

“She was more of a friend than any of the other nurses that were there,” he says.

He spent about three weeks at the 71st Evacuation Hospital, was transferred to a Japanese hospital, and then sent back to the U.S. He completed his two years of service at Fort Carson in Colorado as a private first class, although the Army has since corrected and promoted his rank to specialist.

He didn’t stay in touch. “I never had any more contact with Fran,” he says.

When Pennington got Van Skike’s first voicemail message in January, her heart dropped.

In her 44 years of living with Cappadocia, Pennington never met anyone from her partner’s time in Vietnam.

“I knew it was legitimate and something big, but I think I had a fear,” she says of that January message. “Part of me was afraid, ‘Is this someone who is going to be causing her more pain? … Or is this a cause of joy?’”

She waited several weeks to return the call. In Benson, Van Skike’s own apprehension spiked as he faced dealing with memories of war.

He had found Cappadocia’s contact information through inquiries on veteran websites. When the response came — with a Tucson address — he was shocked. For several years, he mulled over what to do. Finally, he called.

And finally, Pennington called back.

“He wanted to know how she was,” Pennington says. “I said, ‘I need to prepare you. Fran is not at all like how she was when she was there with you.’” She explained Cappadocia’s current condition. “He heard all of this and said, ‘Can I come and see her?’”

When Van Skike visits Cappadocia, he cradles the delicate hands that once shaved his stubble and applied poultice to his leg.

She squeezes his hands when he tells stories about Vietnam. Sometimes, tears slip down her cheeks.

“It’s good, because I’m having to deal with it,” Van Skike says of his war memories. “I don’t like some of the stuff I’m remembering, but I have to go through it.”

Since January, Van Skike has tried to visit Cappadocia several times each month. On a recent visit in April, she was recognized at a ceremony for women veterans at the State Veteran Home. Sponsored by the American Legion, the event recognized about 20 of Arizona’s female veterans, including Cappadocia and two other residents at the Tucson facility, said its therapeutic program manager, Samuel Nanez. In June, two of Cappadocia’s uniforms are slated to go on display, encased in glass, at the State Veteran Home.

“Those kids were in a foreign country and being bombed every day,” Pennington says. “Their lives were being put at stake. The impact that it must have had on those two, there is that kind of connection that none of us can ever know.”

When Van Skike’s hourlong visits with his nurse draw to a close, he prays with her.

“I know that I’m disappointed in myself that I didn’t try harder, because I moved here 20 years ago,” he says. “I never forgot her but never made an effort to find her until a few years ago. She has been in Tucson since 1985. … At that time, she wasn’t in the condition that she is now.”

But still, he comes. It is his turn to care for Cappadocia.

“It was so heartwarming to see the two of them,” Pennington says. “He thanked her and told her how much she had meant to him all these years and how she saved his life.”

A former Vietnam nurse rediscovered a friend from the war.

The first act deemed worthy of the award occurred in Arizona.

He remembers the rain. The lack of food. The jungles full of Japanese soldiers.

Toby Van Skike was wounded while serving in the U.S. Army during the Vietnam War. He never forgot the nurse who cared for him at the 71st Evac…

Retired 'Candy Bomber' helped Berlin's children after war, is among those there.

The loss of his wife to Alzheimer's and Parkinson's diseases drove him to the piano.

He died in Vietnam. Now her family wants to honor his sacrifice and his mother's loss.

Toby Van Skike, right, is overwhelmed with emotion while visiting with Fran Cappadocia earlier this month. Cappadocia was Van

Skike’s nurse when he was injured in an explosion during the Vietnam War. Four months ago, the two were reunited for the first time.

Toby Van Skike, far right, leads a prayer with Sue Pennington, second from right, and caregiver Jenny Beals, far left, for Fran Cappadocia at the end of his visit with Cappadocia at the Arizona State Veteran Home. Van Skike, who was nursed back to health by Cappadocia in Vietnam in 1968, says he “never forgot her.” The two were reunited in January.

Pfc. Toby Van Skike, left, with his nurse, 1st Lt. Fran Cappadocia, after Van Skike was wounded on April 26, 1968, while serving in the Vietnam War.

Van Skike was injured by a piece of shrapnel from an explosion in Vietnam.

years in the military before retiring in Tucson.