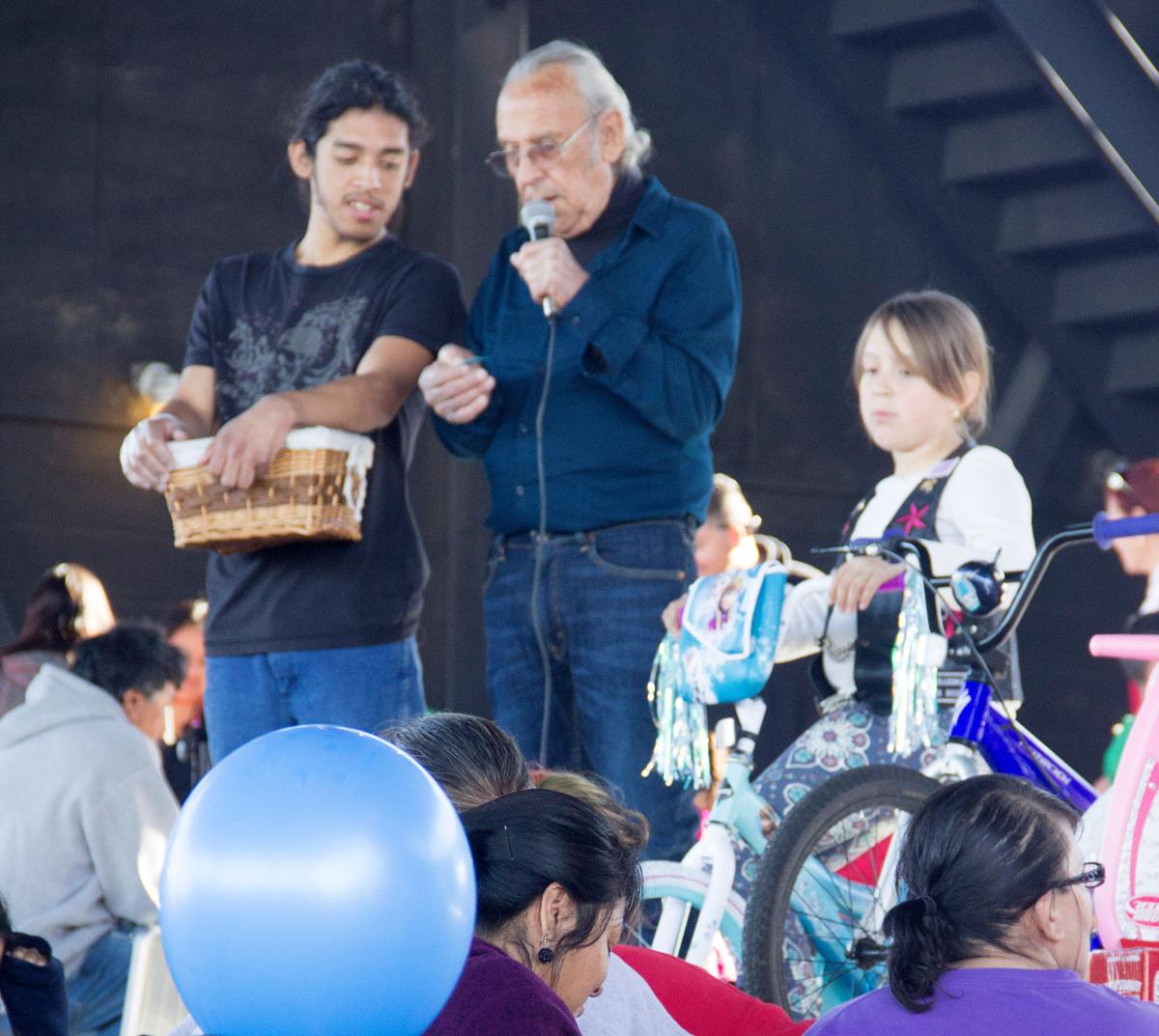 Ramon Gonzales, right, began the 31st Street Christmas Party in his backyard. It has grown and hosted 10,000 last year at Casino del Sol. 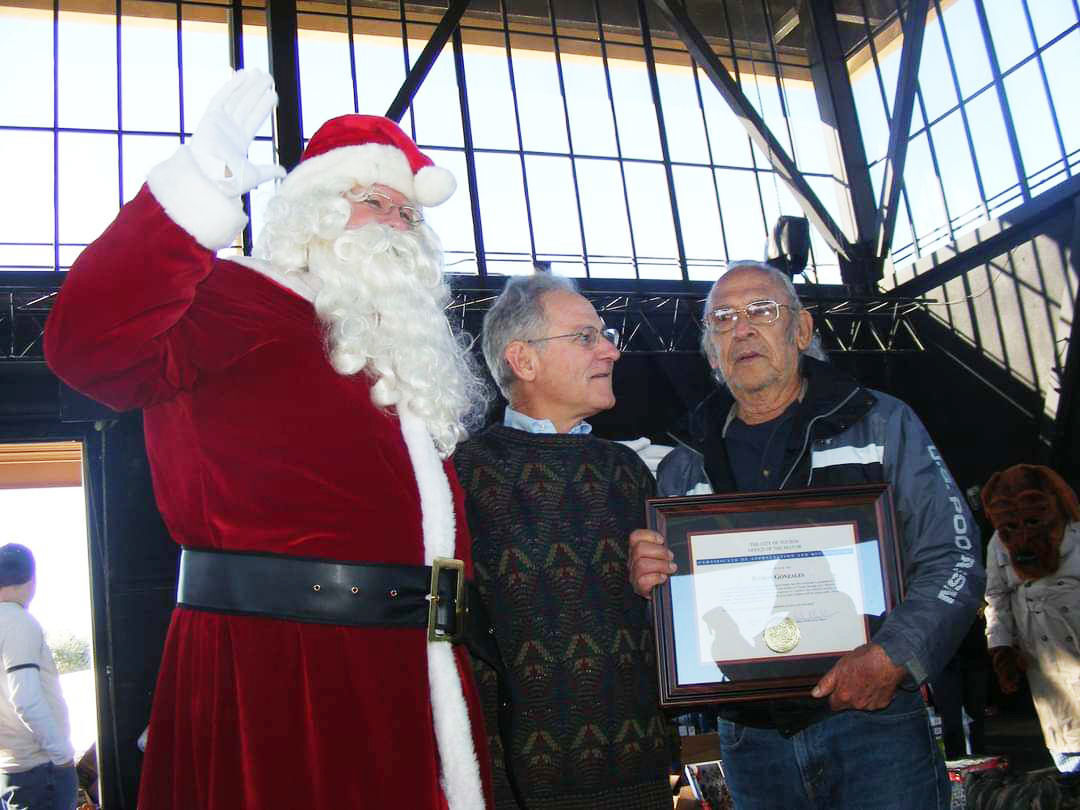 By Loni Nannini For the Arizona Daily Star

For 49 years, Ramon Gonzales made the holidays magical for children in South Tucson with the Miracle on 31st Street Christmas Party.

This year, there is no miracle in the making: The party has been canceled because of the pandemic, and Gonzales is dealing with the reality of COVID-19 and related complications firsthand.

“He is in the hospital and just wants to come home. Family and friends are praying that Ramon will come back home, and we are asking for prayers for him. Our main goal right now is for him to get out of the hospital,” said his wife, Carmen Gonzales.

Carmen said they realized a few months ago that the party was not likely to happen, but it was hard to accept since 2020 would have marked the 50th Anniversary.

The tradition is truly a grassroots event: It started in Gonzales’ backyard on 31st Street with him grilling hot dogs and gifting 50-cent trinkets for his children and their friends on Christmas Eve. As his kids grew, so did the party. One year 200 children showed up, and Gonzales realized he needed help. He approached local businesses and the party continued to grow. It eventually became so large that it was moved to the Tucson Rodeo Grounds, then Tucson Electric Park.

For the past few years, AVA Amphitheater at Casino del Sol has hosted 10,000 children and their families.

The children receive toys and enjoy a visit with Santa, who arrives in a parade of classic cars.

Tucson icons such as Silver Saddle Steakhouse have provided food and support for the event for many years; and businesses, civic groups and individuals citywide have offered support and have collected toys over the years.

The event has involved generations of Tucsonans: Many who attended as children returned as adults with their own kids and/or came back to gift time, money or toys to the endeavor. Among those is Larry Gonzales (no relation to Ramon), who has coordinated the classic car parade and has collected toys through the Die Hard Raiders Booster Club for several years.

“I was one of ‘Ramon’s kids’ who knew him from the party every year. It gave us something to look forward to at Christmas time. … It is a great tradition, and it is awesome that he is still around and doing it. He was heartbroken when it was canceled this year,” said Larry Gonzales.

He said the classic car/motorcycle parade will continue to boost Ramon’s spirits and spread Christmas cheer.

The “Christmas Caravan Cruise Parade on 31st Street Through South Tucson” will be held Saturday, Dec. 19. Cars, trucks and motorcycles will gather at 8 a.m. at Rudy Garcia Park, more commonly known as Rodeo Park, 5001 S. Nogales Highway, at the corner of South Sixth Avenue and East Irvington Road. The parade will begin at 9:45 a.m. Toys will not be collected, but there will be special appearances by Santa Claus, the Grinch and other characters.

The public is being asked not to congregate at the park, but rather stand alongside the parade route which will proceed north along Sixth Avenue, then circle west on West 31st Street to South 11th Avenue and then east along West 30th Street. Pandemic protocol, including wearing masks and social distancing, will be followed.

Ultimately, he said the effort is for Ramon Gonzales and the entire community.

“We are trying to keep Ramon’s hopes up and telling him, ‘Next year will be better.’ Hopefully he will be out of the hospital when we do the parade, and we want him to know that we, as a community, are still in this with him. It is good to have something to look forward to. This is for the kids and Ramon, and it is not going to go away,” Larry Gonzales said.

With the pandemic continuing as 2020 draws to a close, Santa and his elves might need a little extra help this holiday season.

The public can drop donations of food during a no-contact collection from 1 to 5 p.m. Saturday, Dec. 12

Toy and donation drives are a little different this year, but the need in the community remains high.

Foster families often need clothing for children in an emergency.

Louise Marshall was a pioneer in Tucson philanthropy

Ramon Gonzales, right, began the 31st Street Christmas Party in his backyard. It has grown and hosted 10,000 last year at Casino del Sol.