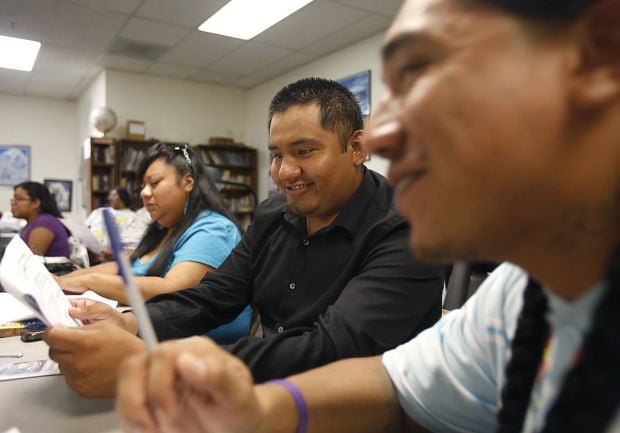 Phillip Enos, 29, center, grew up on the Tohono O'odham Nation but left at age 16, sensing little opportunity. But now, years later and back in Southern Arizona, he's seeing a turnaround for tribal members. Here, he's at a jobs club meeting at the Tucson Indian Center. 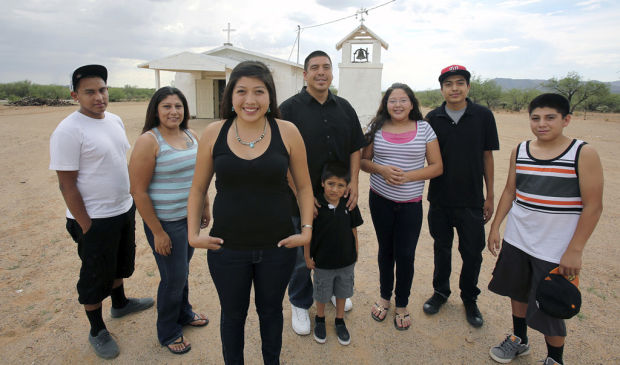 "My parents struggled, and I saw how it affected them," says Nadia Jose, 17, front, a recent Baboquivari High graduate who will soon start at the University of Arizona. Here, she's at St. Paul Church in Sells with, from left, boyfriend Nakio Lopez; her mother, Tanya Rios; her father, Manalito Jose; brother Marcello, 5; sister Noelle; and brothers Manalito Jr. and Mathew. 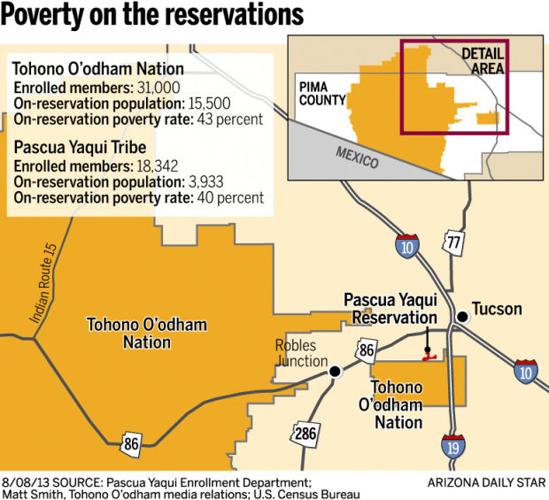 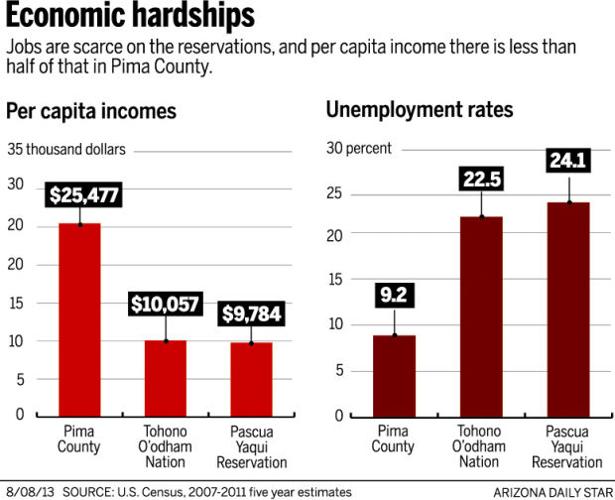 Growing up on the Tohono O'odham Nation, Phillip Enos loved playing baseball with friends and picking fresh corn and watermelons at a nearby farm with his grandmother.

She taught him his native language and told him, "This is always your home. Don't ever forget that."

But as Enos grew up, he started feeling trapped. All around, in the Sif Oidak District where he was raised, he saw drug abuse, joblessness, hopelessness. His uncle advised him to leave and never come back. "There's nothing here," family members said.

So at age 16, he moved away to live with friends in Casa Grande.

"I just didn't see any opportunity," he says, "so I left as soon as I could."

The poverty on Tucson's neighboring American Indian reservations is pervasive.

Job prospects are slim and unemployment is high. More than half of children in the Tohono O'odham Nation and 42 percent of Pascua Yaqui children are impoverished, compared with 24 percent of all children in Pima County. High school graduation rates are lower than the rest of the county and even among graduates, poverty is entrenched.

Many children grow up with one or no parents in the home, and drug abuse is rampant. Alcoholic liver disease is the leading cause of death among middle-aged residents of the Tohono O'odham reservation and poverty-related health problems like Type 2 diabetes and obesity are affecting tribal members at younger ages.

With too-few high-paying jobs, too many fractured families and a lack of political will for change, the Tucson area has long been poor - and some of the harshest conditions are found on the reservations.

For children, growing up in poverty dims the chance of success as adults. The chaos that comes with unstable housing, spotty school attendance and limited access to nutritious food and health care make it more likely kids will grow up to be unemployed, unhealthy and in trouble with the law.

On the Tohono O'odham and Pascua Yaqui reservations, advocates are determined to reverse these trends.

"People are coming in who secured a job as a landscaper or a laborer and saying, 'What's next?'" says Tucson Indian Center CEO Jacob Bernal. The center offers social and job-placement services for urban, off-reservation American Indians, focusing on jobs that pay at least $10 an hour. "We're seeing more career focus. We're seeing a lot less hand-to-mouth existence."

Enos, who is 29, noticed that turnaround when he recently moved to Tucson and visited family on the reservation. He'd lived in California for eight years before his return to Arizona.

But coming home, he found reason to hope.

His sister had become a representative for his district on the tribal council. His friends who got tribal assistance were using that money to further their educations and escape the cycle of drugs and poverty.

"Some are still stuck in that way," says Enos. "But for the most part, people are moving forward."

Leaders for both nations declined repeated requests for comment for this story.

Poverty is deeply psychological, contributing to cycles of dependence and hopelessness, advocates say. American Indian children have the highest suicide rate of any minority group, says Manley Begay, senior lecturer and associate social scientist in the American Indian Studies program at the University of Arizona.

Poverty can also contribute to lifestyle-related illnesses, such as Type 2 diabetes and heart disease - both of which have a grip on local American Indians.

Diabetes-related illness is the leading cause of death on the Pascua Yaqui reservation for those ages 45 to 64, says a 2012 statistical profile from the state health department. On the Tohono O'odham reservation, an estimated 20 percent of adults have Type 2 diabetes, says the Indian Health Service.

"It's difficult for people to even think about taking care of themselves if the urgent need is to put food on the table," says Jennie Joe, director of the Native American Research and Training Center at the University of Arizona and professor of family medicine. "Consequently, you develop poor eating habits. Recreational activities that might include physical activities are not on your agenda."

Renteria has treated children as young as 10 who are developing the disease. He refers them to free fitness classes - yoga, spinning, aqua-aerobics - at the health department's nearby Wellness Center, funded by the tribe and federal grant money in 2008.

While economists point to the need for targeted efforts to address poverty on the reservations, others say the media's focus on negative statistics fuels distrust between native and non-native people and obscures the tribes' economic contributions to Tucson.

"It's easy to look at the reservations and say, 'Well, the statistics there are terrible and that pulls down everything,'" says Stephen Cornell, director of the UA's Udall Center for Studies in Public Policy. "But it's a little more complicated than that."

Last year Arizona tribes collected nearly $2 billion in gross gaming revenues and gave $85 million to the state to fund public education and trauma care, among other services, a Department of Gaming report says.

The Tohono O'odham Nation is among the city's top-15 public employers, providing the equivalent of 4,350 full-time jobs, this year's Arizona Daily Star "Star 200" survey shows. More than 1,200 of those are at their Desert Diamond Casinos.

But casino jobs don't necessarily benefit tribal members on Tohono O'odham land, some of whom live three hours from the nearest casino, says Grijalva, of the tribe's Economic Development Authority.

After a lengthy search, Tohono O'odham member Leon Pablo, 46, recently got one month's work installing solar panels at the San Xavier District office for $12 an hour.

But now he's back on the hunt. He's applied for at least 15 permanent jobs this year, from general labor to dishwashing, but was rejected time and time again, which he attributes to his having a criminal record.

He's looking for work in the city because jobs are scarce on the reservation, he says.

"There's not much. All you can do is work for the tribe or there's a convenience store out there," he says.

Efforts to tackle poverty on the reservations must address the institutionalized paternalism that stifled socioeconomic progress for generations, says University of Arizona's Jennie Joe.

Before tribes received federal recognition in 1975, "communities couldn't do anything without permission from the (U.S.) government," Joe says. "There was such a pervasive sense of dependency. The federal government knowingly or unknowingly really pushed native people into that position."

Reservation unemployment and poverty rates are more than double that of the rest of the county, but Begay of the UA says that's major progress from the 90 percent unemployment rates some tribes experienced 30 years ago.

A few decades after achieving self-determination, "Indian nations are just now beginning to understand how to build nations that work," Begay says. "It's only now that Indian nations are going to find a tremendous amount of success."

For 16-year-old Jacquel Rivers, who spent most of his childhood on the Tohono O'odham reservation, education was always important.

"I always said I wanted to go to college," he says. "In all the movies, whenever you see people being successful, they went to college."

When his parents were incarcerated for selling drugs a few years ago, Jacquel felt even more determined to succeed.

"When they went to jail, I just wanted to leave home and go to a better environment," he says. "It clicked in my head."

He balanced schoolwork and extracurricular activities with helping his grandmother raise his five younger brothers and sisters. He graduated early from Baboquivari High and is headed to the University of Arizona this month, with plans to become a surgeon. His college tuition will be fully funded by a Gates Millennium Scholarship.

Poverty rates dropped to 7 percent on the Tohono O'odham Nation among the 6 percent of the population with degrees. Statewide, college graduates have a 5 percent poverty rate.

But for low-income children on the reservations, many of whom come from single-parent homes or are raised by grandparents, even finishing high school is a challenge.

On the Tohono O'odham Nation, drug- and gang-related offenses begin as young as elementary school, a 2011 school improvement grant application says. Students and teachers can face hourlong commutes to school. Tardiness and high turnover rates among teachers are major problems.

But efforts to improve teacher and student performance are paying off, says district Superintendent Alberto Siqueiros. Three years ago, the district replaced 60 percent of certified staff, hired more teachers to decrease class sizes and added intensive professional development for teachers. The district also has boosted starting teacher salaries from $31,000 in 2009 to $45,000.

"There is a highly comprehensive transformation effort underway," he says.

Baboquivari High graduate Nadia Jose, 17, wants to be the first in her family to get a college degree. She starts at the University of Arizona this month.

"I just don't want to be at a job with minimum wage pay and having to struggle throughout my life," says Nadia, who hopes to be a pediatric nurse practitioner. "My parents struggled, and I saw how it affected them."

Nadia plans to work on the Tohono O'odham reservation, where she says the vast majority of health professionals are non-native. She hopes her presence will inspire the kids she treats.

Education on the rise

Recipients of of high school degrees on Pascua Yaqui reservation:

A solution: Sowing the future for tribal youth

High school graduation rates are rising on both the Pascua Yaqui and Tohono O’odham reservations, and administrators say more kids are applyin…

Phillip Enos, 29, center, grew up on the Tohono O'odham Nation but left at age 16, sensing little opportunity. But now, years later and back in Southern Arizona, he's seeing a turnaround for tribal members. Here, he's at a jobs club meeting at the Tucson Indian Center.

"My parents struggled, and I saw how it affected them," says Nadia Jose, 17, front, a recent Baboquivari High graduate who will soon start at the University of Arizona. Here, she's at St. Paul Church in Sells with, from left, boyfriend Nakio Lopez; her mother, Tanya Rios; her father, Manalito Jose; brother Marcello, 5; sister Noelle; and brothers Manalito Jr. and Mathew.