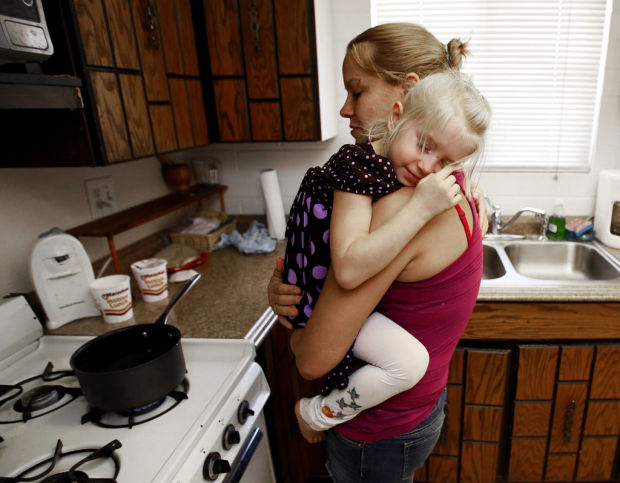 Joleen Hosler's is one of many single-parent households here. It's been a struggle. She has worked hard to maintain sobriety and overcome years of addiction and an abusive upbringing. On a recent day she was fixing a lunch of soup with daughter Caedence Silva, 4. 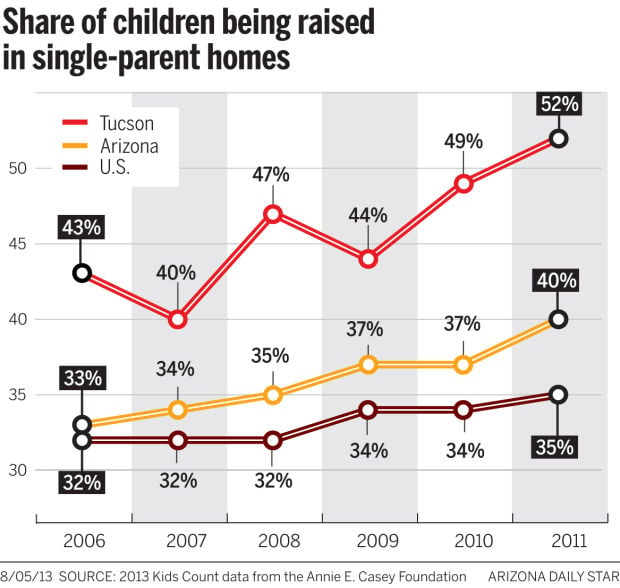 Parenting alone and hardly getting by. In Pima County, this scenario is all too common for young mothers with little education and poor job prospects.

Tucson has one of the nation's highest percentages of children living with single parents - 52 percent. For all of Pima County, 71 percent of kids in poverty live with only one parent, U.S. Census data show.

This is a tough place to raise kids alone. Tucson has few high-paying jobs, dwindling government assistance and a lack of political will for change. The recession made life worse for struggling single parents - and by extension, for their kids.

Growing up poor dims kids' chances of success as adults - and makes it more likely they'll grow up to be unemployed, unhealthy or behind bars. It also puts girls at higher risk of an early pregnancy.

While Pima County has seen a decline in teens having kids, Arizona still has the third-highest rate of teen pregnancy in the nation, the Coalition for Healthy Arizona Teens says. From 1999 to 2009, births dropped from 39 to 27 per 1,000 females age 19 and younger. But teen births still occur frequently in the county's poorest areas, continuing the cycle of poverty.

Over the same period, 157 of every 1,000 teens on the Pascua Yaqui Reservation had babies. The comparable numbers were 95 on Tucson's southeast side, 88 on the southwest side and 18 on the more affluent northeast side, Pima County data show.

The climb to a higher standard of living can be insurmountable for impoverished single and teen mothers, says Patti Caldwell, executive director of Our Family, which provides shelter and support for Tucson's homeless children, youths and families.

"When you hit a certain level of income, you lose every single one of the supports that allowed you to be able to sustain," she says. "It's a very challenging gap between when you qualify for help and when you are still not making enough to make it alone."

A study released in December by the Women's Voices, Women Vote Action Fund found that the U.S. had the highest poverty rate for single-parent families among 17 high-income countries. It also had the highest percentage without health care and the weakest support system.

That's not to say U.S. women weren't trying. The report found that single parents in the U.S. also had the highest employment rates - but mostly in low-wage jobs that didn't offer health insurance.

The challenges for many single mothers in Pima County are compounded by a lack of child support: Local moms are owed $240 million, while statewide it's nearly $2 billion, the Arizona Attorney General's Office says.

"One of the things that's so tragic about this is that, for many women, child support is one of the best ways to help bring them up to a self-sufficient standard because they don't have to pay taxes on it," says Laura Penny, executive director of the Women's Foundation of Southern Arizona.

"This is a gaping hole for custodial parents."

This past year has been full of the unexpected for Alexis Stepteaux.

Stepteaux, 21, became homeless when her grandmother died of a heart attack a few months ago. The two had been living in a rental home, which Stepteaux could not afford alone. She had lost her father in a car accident in 2009, and her mother doesn't live in Tucson.

Stepteaux is due to have a baby, her first, in September. She is sleeping on couches at friends' apartments while she waits for space in one of Our Family's programs. She is not in a relationship with the baby's father but expects he will be part of the child's life.

She has a full-time job in retail. She says she isn't nervous about her life, and looks forward to the baby, but finds moving around difficult.

She hopes to return to school at some point and work in the medical field.

If she gets a space with Our Family, she will receive services that could help her move forward.

There's a waiting list for housing for parents ages 18 to 22, says Laurie Mazerbo, director of the agency's homeless services. Our Family used to help teen parents under 18 but lost funding a few years back.

A primary goal of the organization's programming for young parents is education to help prevent second pregnancies.

If Stepteaux gets a spot, she can pay reduced rent while learning parenting and life skills. The ultimate goal would be to help her become self-sufficient in a market-rate apartment.

But with rent averaging $500 per month, that's tricky.

"If you're making minimum wage and you have a child and the state of Arizona doesn't help at all with day care," Mazerbo says, "I don't know how you're going to do it."

The chance of having a baby young and unprepared rises with other risk factors, the American Academy of Pediatrics reports.

Arizona is one of three states that teaches abstinence-only sex education - and parents are required to opt in for their child to participate, so kids with dysfunctional parents are often left out. Arizona state Sen. Steve Farley, D-Tucson, wants to change the law so parents have to opt out for kids to skip sex education. He also wants comprehensive education, not abstinence-only.

"It's in all our interests to reduce unintended pregnancies," he says. "Kids should get this (education) whether or not their parents are involved in their lives."

The three states with the lowest rates of teen pregnancy - New Hampshire, Vermont and Maine - all require comprehensive sex education in the classroom, the Coalition for Healthy Arizona Teens reports.

Vanessa Cota and her mother both had their first child at 18. Also like her mother, Cota's relationship with her child's father was unhealthy and controlling. When it dissolved last year, Cota, 22, found herself facing homelessness with a preschooler in tow.

Since she has been living in temporary housing through Our Family, she is working at a restaurant and attending the University of Arizona. Her major is family studies and human development.

Cota has big dreams, but agrees her life is far from easy. She's grateful she has a close relationship with her mother and hopes to live near her when she leaves Our Family in the fall.

"I don't know where I'd be if I didn't feel that bond I feel with my mom," she says. "We've been through a lot, but I always felt like we were in it together."

Children who are born to teen mothers tend to:

• Have fewer skills and be less prepared to learn when they enter kindergarten.

• Be incarcerated at some time during adolescence.

• Drop out of high school.

• Give birth as teenagers.

• Be unemployed or underemployed as a young adult.

Photos from the Tucson Citizen poverty series on the heels of Pres. Johnson's War on Poverty. Pima County's John Arnold, who lived in many poo…

When Joleen Hosler was 6, she watched her mother abandon her little sister. The baby was left, strapped in a car seat, in an apartment until h…

What happens to moms who leave welfare?

The 1996 welfare-to-work reforms were supposed to end the era of "welfare queens" and put single moms to work.

Breaking down unwed pregnancy by race and ethnicity

Births to unwed mothers in Pima County are not evenly distributed among racial and ethnic groups.

Joleen Hosler's is one of many single-parent households here. It's been a struggle. She has worked hard to maintain sobriety and overcome years of addiction and an abusive upbringing. On a recent day she was fixing a lunch of soup with daughter Caedence Silva, 4.