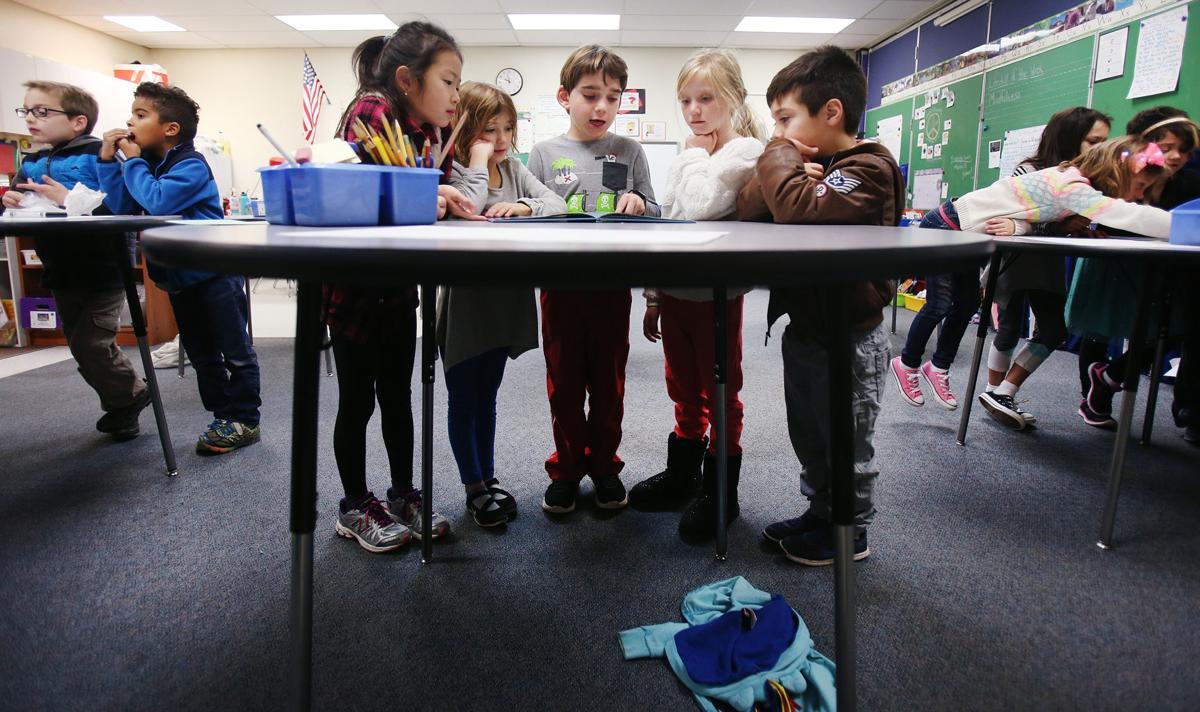 Elementary school student Sawyer Lazarus, 8, center, reads aloud from a book with his table mates (from left) Elise Kim, 7, Lexi Appel, 7, Eva O’Brien, 7, and Julian Hopkins, 6, as they stand instead of sit at their new desks at Manzanita Elementary. 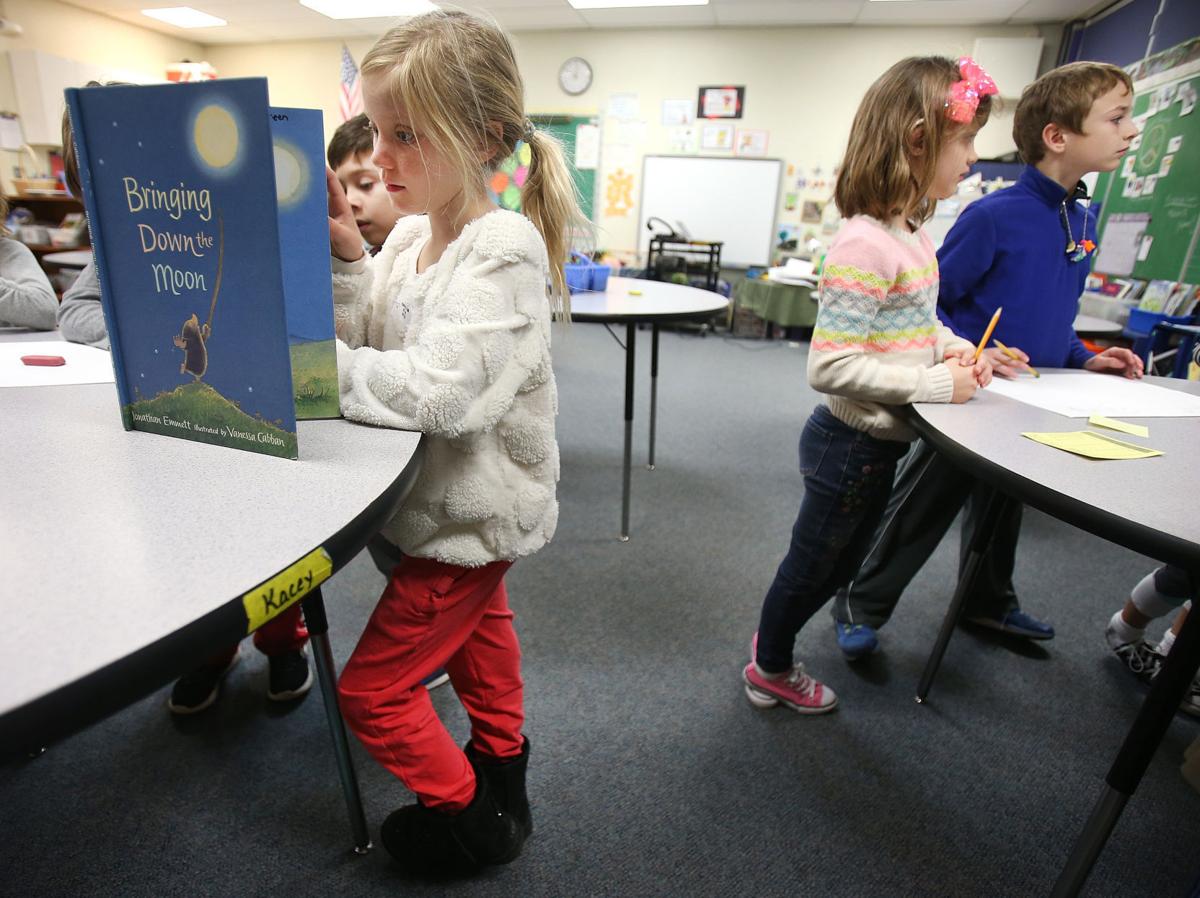 Eva O’Brien, left, 7, stands at her desk to read from a book as fellow first and second graders in Tiffany Wiley’s class work on reading projects at Manzanita.

When McKenzie Brown, an 8-year-old second-grader, walked into her classroom after winter break, she was surprised to see that the chairs were missing from their tables.

She thought it was an oversight.

“I was like, ‘Did the teacher forget to put the chairs back?’” McKenzie recalls.

But the lack of chairs was intentional for the Manzanita Elementary School classroom, since its teacher, Tiffany Wiley, has agreed to be a tester of standing workstations.

Wiley, who teaches a first- and second-grade class, was approached by parent Josh Appel, an advisory board member for StandUpKids, an organization that aims to get standing desks in all U.S. classrooms, in September with the idea of converting from traditional workstations to standing ones.

“The benefits are huge if you agree with the research,” Wiley discovered. “It seemed pretty solid to me. I didn’t see any negatives. There was a lot with attention — that it helps students maintain attention longer because they’re not getting droopy in their seats. There were a lot of good things said, so I thought we’d give it a try.”

The principal of the Catalina Foothills District school, Kim Boling, was interested, too.

“The concept of flexible seating is an important one,” Boling said. “I am intrigued by the benefits of standing desks and open to exploring them at our school.”

Appel is also an emergency medicine doctor at Banner-University Medical Center, and says that the “growing epidemic of childhood obesity, ADHD (attention-deficit hyperactivity disorder) and orthopedic issues all stem from the fact that our kids aren’t moving as much.”

Between sitting in class, sitting in the car or bus, sitting to do homework and eat meals, plus watching television or playing on phones or computers, children are sitting about 85 percent of their waking hours, says research by Kaiser Family Foundation.

In his book “Get Up! Why Your Chair is Killing You and What You Can Do About It,” Dr. James Levine of the Mayo Clinic says the problem is so bad that prolonged sitting is equated with smoking because either will shorten your life.

“It’s amazing the impact sitting has,” Appel said. “We all do it too much. New studies have come out and are really starting to show the detriments of sitting — even if you’re involved in sports. People say ‘Oh, my kid plays soccer.’ That’s great, but it’s only one hour a day and doesn’t overcome the seven or eight hours they spend sitting, so it’s really important that everybody keeps moving.”

“It allows kids to kind of move around and to burn off some of that energy that kids have,” he said. “It keeps you focused and more attentive. It’s hard to fall asleep when you’re standing.”

There were concerns about how much it would cost to convert Wiley’s class into a standing classroom.

But, Appel was able to modify the tables already there for about $40 and a day-and-a-half of labor.

He created new legs to extend the table heights. Students are grouped together by height, so they can comfortably rest their forearms flat on the table.

“We measured all of the kids,” Wiley said. “We have four different levels. They’re grouped by height, which is not usually how you group students, but it works okay.”

Wiley told the kids there would be some classroom changes when they got back from winter break, but they didn’t know what those would be.

“When they got back, I gave them five minutes of freak out time. I said, ‘come in, explore, freak out, go crazy,’” Wiley recalls. “Then we sat down (on the floor) and kind of talked about the whys, what the purpose was and then they were like, ‘hmmm.’”

There was a little grumbling from a few kids who didn’t want to stand all day. “We talked about options, about what they could do if they were tired and to respect their body. If you’re tired, you should sit down,” Wiley said.

There is one table with chairs around it so the students can take a sit break, or they can sit on the floor in front of the white board or at their work space.

Wiley had the students fill out a survey on the first day, “because I don’t want them to do something they hate,” she said. “There were only six kiddos out of the 24 that were there that day that were either lukewarm or did not like. All others were super positive, which I was surprised for the first day.”

Most students were not exhausted from standing all day. Many actually like it.

“I kind of like it because it helps me get a little more exercise,” said Sawyer Lazarus, an 8-year-old second-grader. “It keeps me more awake in class. And it’s easier to move around because there are no chairs in the way.”

First-grader Elias Guerrero, 7, agreed. “I like that you stand up because it gives you like a workout and it’s good for your body.”

Although his legs get a little tired, Mason Hashim, an 8-year-old second-grader, said it helps him stay awake in class.

“Their legs are tired, but not the ‘I need to go to bed tired’ which we have heard quite often,” Wiley said. “Whether it’s cause and effect, I don’t know, but it’s kinda cool. Their ability to fidget. They’re still little. The chair is almost like a mini prison and a lot of them just can’t sit still that long, so we had to build in a lot of wriggle breaks. Now we don’t do that, we do sit breaks. We’ll say ‘you’ve been standing for a long time, let’s sit down now.’”

Parents of Wiley’s students have been positive about the change, as well.

“The parents I’ve heard from — I’ve probably heard from 10 out of 25 — have been overwhelmingly positive,” Wiley said. “I had one tell me that her son is asking for one at home.”

Wiley will continue to survey her students to decide whether to keep the standing workstations or not.

Other schools trying it, too

Marana Unified School District is in its second year of a three-year project to provide new technology and furniture, which includes standing desks.

The district found that students have varied preferences about sitting or standing during class and is trying to honor them.

Getting the standing tables installed in early grades was personal for Appel.

His daughter, Lexi, is a first-grader in Wiley’s class. She came home one day and told her dad she loved school so much, but didn’t like how much sitting they did.

“So I got involved and fortunately Tiffany was very receptive to the idea,” Appel said.

Now, he’s on a mission to get all Arizona schools converted to standing work stations.

“It’s not often I feel I really have an impact on people’s lives,” Appel said. “I feel like this really is an opportunity to have lifelong impact, which is awesome.”

Or perhaps you prefer flowers and ninjas, pi or rocket ships

Tucson teen with goal of public service is accepted at Harvard

The mesquite tree at Amphitheater Middle was more than 100 years old.

Program aims to show low-income students what's out there.

Amphitheater's three high schools spend more time in classrooms than their peers in the Tucson area.

The expo will provide information about TUSD's special programs.

We've collected a few front pages from newspapers.com to give you a look at some Jan. 27 papers in history. With a subscription to newspapers.…

Education Enrichment Foundation will give out more than $25,000.

Winners will move on to compete nationally.

This is the third annual event.

Elementary school student Sawyer Lazarus, 8, center, reads aloud from a book with his table mates (from left) Elise Kim, 7, Lexi Appel, 7, Eva O’Brien, 7, and Julian Hopkins, 6, as they stand instead of sit at their new desks at Manzanita Elementary.

Eva O’Brien, left, 7, stands at her desk to read from a book as fellow first and second graders in Tiffany Wiley’s class work on reading projects at Manzanita.