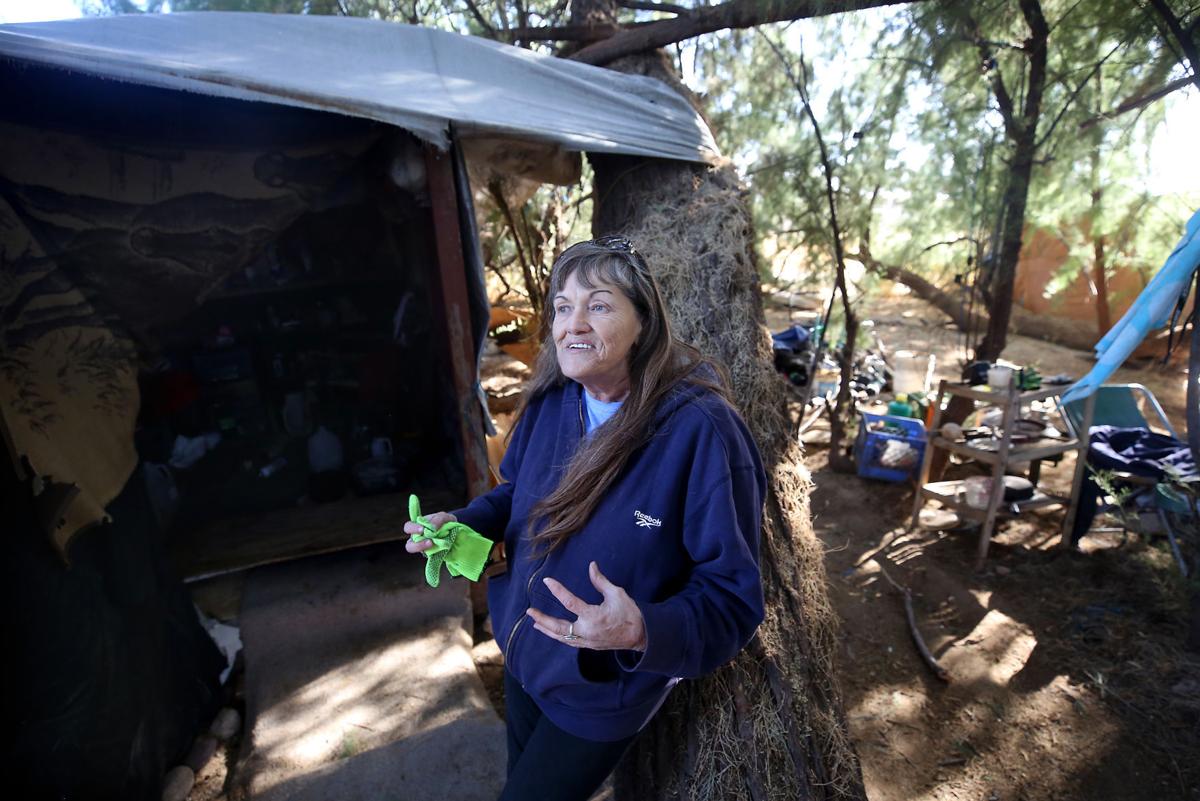 Terri Franco, 58, also moved out of the makeshift camp near Pima College’s Desert Vista Campus. She now lives with her mother. 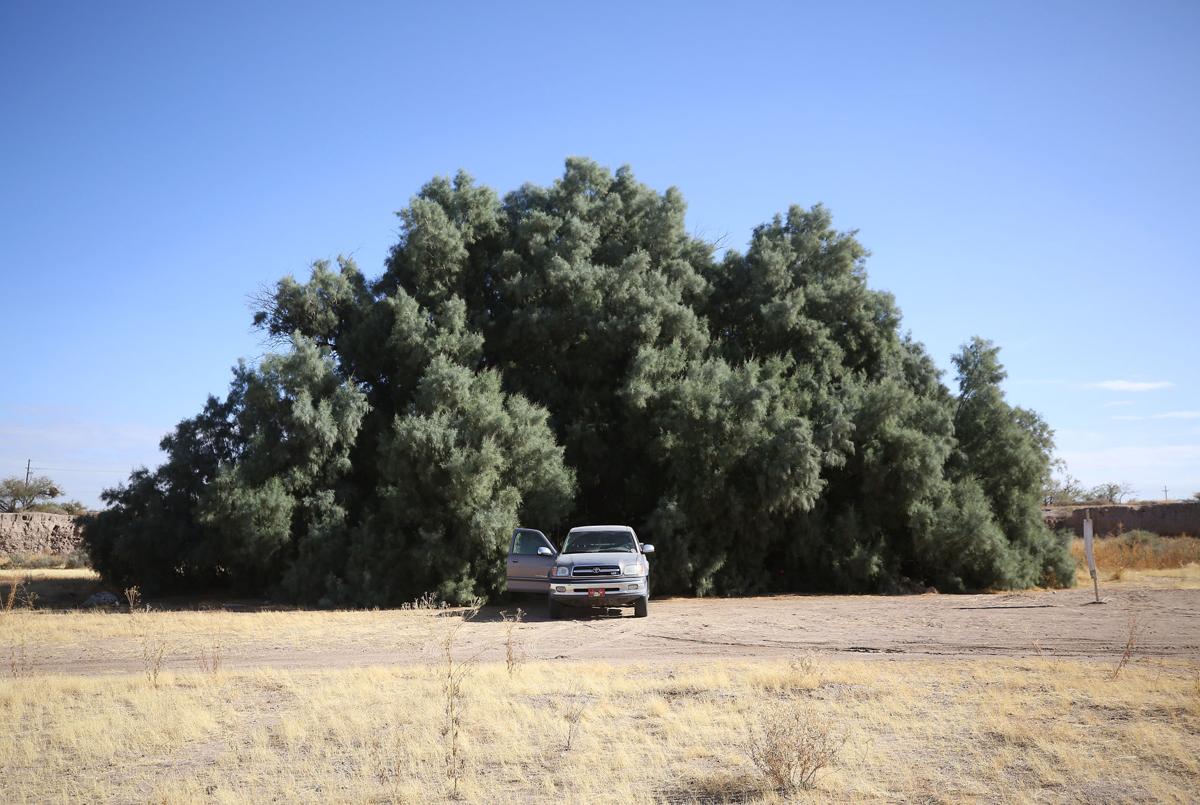 A homeless camp existed within this tree near the Pima Community College Desert Vista Campus. It is empty now.

Nobody lives under this giant tamarisk tree on the floor of the Santa Cruz anymore.

It was a great home for the “urban campers,” as they called themselves, who lived here — so great that you couldn’t accurately call them “homeless.” Some of its many branches reached about 40 feet in the air, while others bent all the way to the ground, providing total cover from the outside world, and creating shaded rooms underneath.

Dan McLeod was the only one still living in the camp under the tree, on Tucson’s south side, when he started cutting wood Dec. 16. At 81 years old, McLeod was living alone under the tree and even chopped his own firewood.

“I cut a bunch of wood,” McLeod told me Thursday, in his hard Maine accent. “I wore myself out, and I kept getting sorer and sorer.”

Finally, he had to stop, and eventually he couldn’t move at all from the pain. He used his cellphone to call his old camp mate, Terri Franco. She called an ambulance, and the police to guide them down, and Dan was taken to the hospital. With that, he finally left this tree camp and the outdoor life for good.

The tamarisk, near Pima Community College’s Desert Vista campus, was the site of a five-year experiment in keeping a homey, organized homeless camp. The residents rotated a bit, but most were veterans of living outside in Tucson and had lived together in a previous camp, further north in the Santa Cruz river bottom.

About five years ago, county workers cut down all the tamarisks — also known as salt cedars — in that area as part of a path-building project. The trees are an invasive species and suck up massive amounts of water, but the way they grow also makes them great structures for outdoor desert living.

When I met them in February 2014, McLeod, Franco and another camp-mate, George Chandler, were living together under the tree. One, Franco, was in her 50s, one, Chandler, was in his 60s, and McLeod was in his 70s. Franco had called me after I wrote a column about homeless people camping downtown. She was disgusted with how messy they were and wanted to show me a neat camp.

Over time, Chandler left camp and then died. Another woman moved in and then out twice, but Franco and McLeod stuck together, always with several dogs. They became well-known among local government officials and social service agencies. At least twice, police officers posted the camp, warning the residents they had 72 hours to move out, but they never followed through with the order.

Instead, social service agencies showed up to help find them housing and help. I was there for one such visit, in which a representative guaranteed me he would get McLeod, a veteran, into housing. He didn’t know the depth of the New England stubbornness he was dealing with.

“Dan has 25 years living in this desert,” Franco told me Thursday. “He’s really kind of feral.”

So, after all the agencies’ plans fell through earlier this year, Franco, 58, worked out her own plan with her family. Her aging mother needs lots of help, so she and McLeod would move into her mother’s house, where he would pay rent, and she could look after both of them. The dogs would have to settle for a yard instead of the freedom of the river bottom.

But McLeod had been living outside a long time. And when it came time to start moving out in August, he got angry and wouldn’t do it.

“I think he was frightened of going into a house,” she said. “He went on tangents that I was going to lock him in his room.”

Franco finally did move out without McLeod, though she and others would look in on him regularly. Living in a house has been quite a change. She told me about it Thursday when she and friend Cindy Murphy were loading up some of Dan’s belongings for him from underneath the tree.

“I don’t miss the cold,” she said. “I don’t miss having to diligently haul my necessities — the daily grind of the store, the water, taking out the garbage.”

But she does miss the peace and quiet, even if it was occasionally punctured by gunshots in the nearby neighborhoods. And she misses the animals, especially the roadrunner that became a sort of pet. It would come around, and they would feed it Cheetos. She spread a last bag of them on the ground before leaving the camp Thursday.

“You don’t have the stress of society when you live like this,” she said.

After getting out of the hospital, McLeod is living with two other men in a midtown apartment that is part of a transitional housing complex. He had shaved his beard when I saw him, and he looked and sounded clearer than the last time I’d seen him. But he doesn’t like the new set-up much. And he misses his dog, Terra, whom Murphy is caring for.

“I feel closed in like I’m in a cage,” McLeod told me. “Too many years outside.”

McLeod isn’t clear on the details of his situation — he told me he thinks he’s getting dementia — but Franco said he will likely be able to get a place of his own after moving out of this home. Then he can be reunited with his beloved dog. But he’ll never go back to the freedom of living under the big tree in the Santa Cruz.

“I miss that place. I liked living outdoors — just too old to do it anymore.”

You think you've got concerns about the rains forecast for today and tomorrow?

Terri Franco, 58, also moved out of the makeshift camp near Pima College’s Desert Vista Campus. She now lives with her mother.

A homeless camp existed within this tree near the Pima Community College Desert Vista Campus. It is empty now. 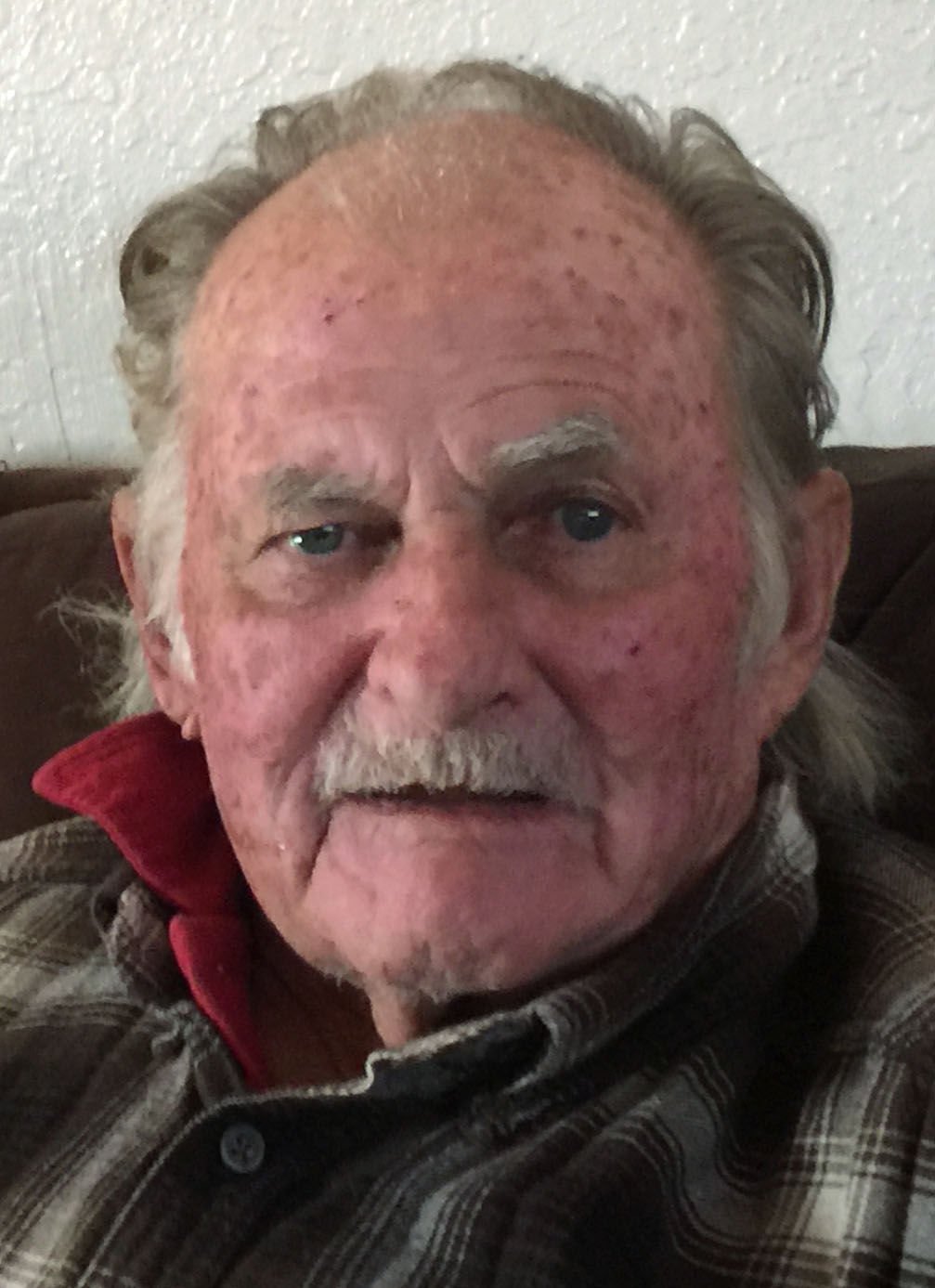