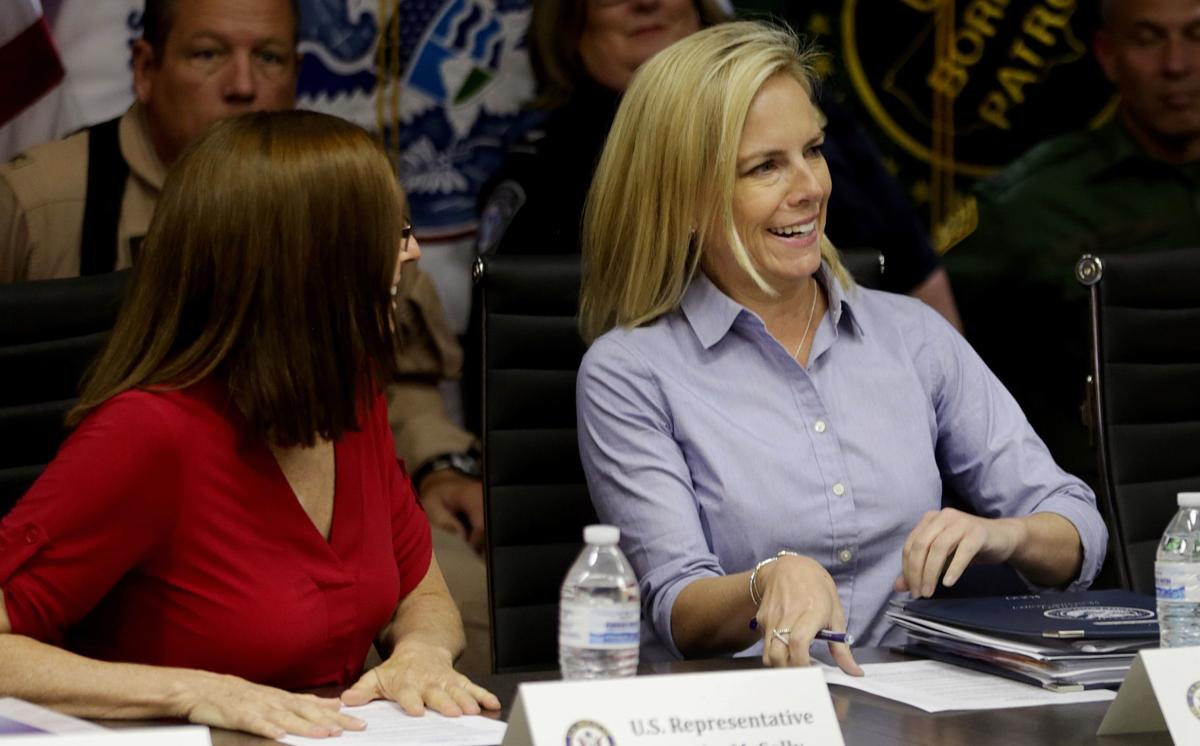 Kirstjen Nielsen, secretary of homeland security, right, and Congresswoman Martha McSally at the DeConcini Port of Entry on Thursday.

The secretary of the Department of Homeland Security complained last week in Nogales that there’s a disinformation campaign going on about the administration’s immigration policies.

Boy, was she right.

Kirstjen Nielsen was talking about the bad press that the Trump administration has received for separating migrant children from parents after they’ve crossed the border illegally or requested asylum.

Her complaint: “It’s a misinformation campaign being waged by those who either harbor an unfounded distrust of CBP and ICE officers, or who just don’t want to see us secure our borders. But our border is in crisis. It’s being exploited by criminals, by smugglers and by thousands of people who have no respect for our laws.”

What the administration is really doing is imposing a policy of prosecuting everyone, she explained. Separating children from parents, as she explained it, is just a side effect of that zero-tolerance approach.

“If as a result of that, if you’ve crossed illegally with your family, we take the parents, and we detain them, and refer them for prosecution. The children are then, under current court cases and law, transferred over to the Department of Health and Human Services.”

What you’ve just read is, in fact, a disinformation campaign — by Nielsen, not by the press — intended to justify the administration’s freely chosen policy of family separation.

How do I know? Her predecessor at DHS and her mentor, John Kelly, has spoken about separating children from parents as a policy to discourage further crossings for more than a year. In other words, the separation of children from parents was not an unfortunate side effect of a new prosecution policy, but a policy goal in itself, intended to deter illegal crossers and asylum seekers.

On March 6, 2017, CNN’s Wolf Blitzer asked Kelly: “If you get some young kids who manage to sneak into the United States, are Department of Homeland Security personnel going to separate the children from their moms and dads?”

Kelly replied: “We have tremendous experience in dealing with unaccompanied minors. We turn them over to HHS (the Department of Health and Human Services), and they do a very, very good job of either putting them in foster care or linking them up with family members in the United States. Yes, I am considering, in order to deter more movement along this terribly dangerous network, I am considering exactly that. They will be well-cared for as we deal with their parents.”

It’s not a bad goal — deterring people from making the dangerous journey across Central America and Mexico is both self-interested and humane. The chosen method of deterrence is the problem. Deportation sends a signal of deterrence, without the added cruelty of separating kids from parents.

Without being announced, the family separation policy appeared to take some preliminary effect in the last year, separating asylum-seeking parents as well as illegal border-crossers from their children. In February, the ACLU filed suit on behalf of an asylum-seeking mother from Congo who had been separated from her daughter for four months as the government processed her claim. The New York Times reported in April that since October, more than 700 children had been separated from “adults claiming to be their parents” since October, 100 of them under 4 years old.

The policy took full effect with an April 6 announcement of a “zero tolerance” policy by Attorney General Jeff Sessions. Everyone caught crossing the border illegally would be prosecuted, even though that means separating parents from their children, who cannot legally be held in federal criminal detention facilities.

“If you are smuggling a child, then we will prosecute you and that child may be separated from you as required by law,” Sessions said.

This was the way the administration had decided, between March 2017 and April 2018, to sell their family-separation policy: As a side-effect, not a policy goal itself.

But it is a policy choice, a cruel and unnecessary one. There are just 2,700 beds for families in the immigration detention system, a Justice Department attorney noted in a May hearing on the ACLU suit. The ACLU attorney said even those beds have not been filled. And if capacity were a problem, the government could have spent the year since Kelly floated the idea of family separation building more capacity to hold families together.

But the administration chose not to pursue other options. And as the policy took effect, news reporting ensued, such as a May 25 piece by my colleagues Curt Prendergast and Perla Trevizo, that revealed inhumane results.

Now, widespread blowback has occurred. It was strong enough that on May 26, President Trump attempted to deflect blame, tweeting: “Put pressure on the Democrats to end the horrible law that separates children from there parents once they cross the Border into the U.S.” Yes, he tweeted “there” not “their” — misspellings seem to be a deliberate communications strategy of his. And yes, he blamed the Democrats for his own policy.

Nielsen also tried to paint criticism of the family-separation policy as an attack on agents.

“In the last couple of weeks there has been a massive dishonest information campaign,” she said. “It’s being waged against the men and women of DHS.”

But that’s not true. The protest is against the administration’s cruel policy choice of separating children from parents that was enunciated soon after Trump took office. Nielsen is just using the employees carrying out the policy as human shields for herself and the president.

The energy put toward the policy and the disinformation campaign defending it would be better put toward building a new alternative that keeps kids with their parents while also ensuring they’re not released into the country.

The former secretary of state doubled-down on his earlier vow not to appoint Cindy McCain to fill any vacancy.

A Guatemalan father saw his son taken away hours before Trump's executive order on border-crossing families.

Nearly 80 immigrant children separated from their parents at the border are housed at a shelter north of downtown.

Kirstjen Nielsen, secretary of homeland security, right, and Congresswoman Martha McSally at the DeConcini Port of Entry on Thursday.