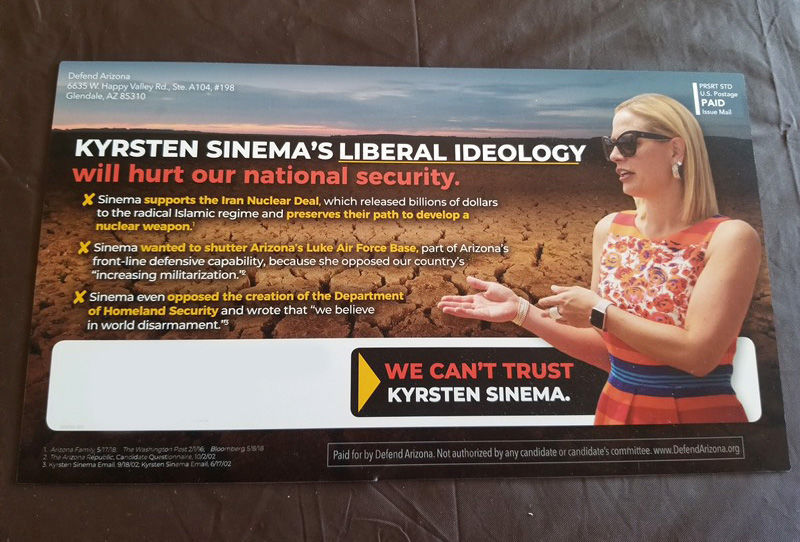 Anti-Kyrsten Sinema ads try to paint her as a devoted leftist, but she has evolved into a careful moderate, much to the annoyance of liberals. 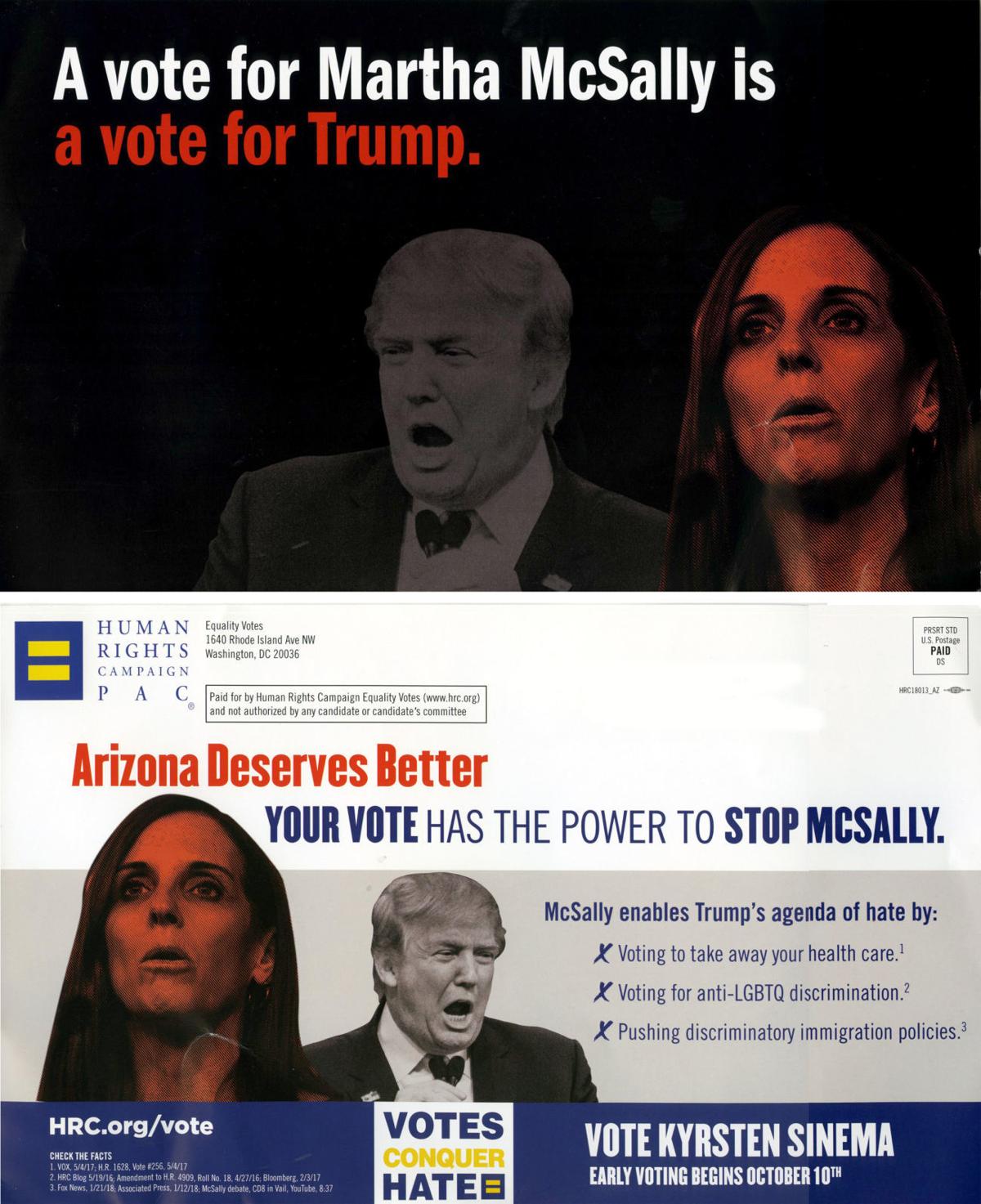 Attack ads won’t say it, but Martha McSally has been an effective member of Congress and has helped sustain Davis-Monthan Air Force Base.

This is lesser-of-two-evils season in Arizona, and America.

It’s the time of year when, traditionally in election years, we bemoan the choices of candidates we’ve been given. We ask ourselves if this is really the best we can do. We condemn the parties and, most of all, the ads.

In my mind, Defend Arizona and the Clean Energy for a Healthy Arizona campaign have distinguished themselves in their absurd negativity as the campaigns wound down.

Defend Arizona, a political action committee formed to help Martha McSally, has raised $18 million — and spent $17 million of it trying to tear down the pleasant edifice of Kyrsten Sinema. Defend Arizona put out a mailer that showed a mushroom cloud over Phoenix, suggesting that would be the result if Sinema is elected. They also paired her with Osama bin Laden in a TV ad. Nice, subtle work.

The Clean Energy campaign, apparently foreseeing trouble ahead, veered wildly away from its original purpose of supporting Proposition 127, the clean-energy initiative. Suddenly, in October, the campaign funded by Tom Steyer started focusing its vast resources on targeting Republican Attorney General Mark Brnovich. The campaign called him “corrupt” for reasons that were obviously a stretch — donations made by Arizona Public Service to the Republican Attorney Generals Association, mostly four years ago.

But we shouldn’t let the ads be our barometer of the quality of the candidates, because that gives them too much power. Increasingly, candidates and outside groups try to disqualify the opponent by finding and hammering home the most negative thing they can dig up about an opponent. Think of Sinema in her pink tutu. Inevitably, it makes you think less of the targeted candidate, even if you don’t fully believe the ad. It makes people start to buy into the lesser-of-two-evils idea.

The truth is, we have some pretty good candidates this year, especially in the U.S. Senate race that has polluted the airwaves with nastiness. Reps. Martha McSally and Kyrsten Sinema are actually good candidates, despite what the ads tell you.

McSally’s background as a pioneering A-10 pilot is well-known, but she also has been an especially effective member of Congress. The Center for Effective Lawmaking’s measure ranked her the ninth-most-effective Republican in the House, and even if she didn’t do it alone, she helped sustain Davis-Monthan Air Force Base. It would have been hard, though, for her to win re-election in her congressional district in east Tucson and Cochise County because she swerved from Trump skeptic to Trump supporter in the last 18 months.

Sinema’s background as a child of poverty from Tucson who grew up to be a lawyer and state legislator before winning a congressional seat is also well-known. McSally and Defend Arizona have shown that she was once a devoted leftist, but she has used her considerable political skill to evolve into a careful moderate, much to the annoyance of liberals.

The votes are where the rubber meets the road and where it’s usually best to judge a member of Congress. During six years in Congress, Sinema’s votes have been in the middle.

So actually, I would even venture to say we are lucky to have those two as major-party candidates.

How about CD2? Similar pattern.

Republican Lea Marquez Peterson is a new candidate but a familiar face around Tucson. She built the Tucson Hispanic Chamber of Commerce from a small organization to a large one. She’s clued in and reasonable on most issues, while probably not a favorite of big Trump supporters.

Democrat Ann Kirkpatrick may deserve to be called a carpetbagger, in that she moved to Tucson recently after living in Flagstaff. But she’s a thoroughly qualified candidate. A former prosecutor who attended the University of Arizona, she’s served two terms representing Congressional District 1.

Rep. Raúl Grijalva — let’s go there. If you’re a conservative, you won’t like him, but the same measure that ranked McSally the nith-most-effective Republican congresswoman ranked Grijalva the 15th-most-effective Democrat. The eight-term incumbent also would take over leadership of the House Natural Resources Committee if Democrats win the House.

His challenger, Nick Pierson, is a newcomer who has not shown a lot of political skill as a candidate, but that doesn’t mean he would not work out as a change-of-pace congressman. His background as a border kid who grew up, in part, on Indian reservations makes him a good fit for the district. Then there’s his 40 years in business as a financial advisor, a different kind of experience the 3rd Congressional District could use.

I could go on. There are solid candidates in most of our Southern Arizona legislative districts. The races for state offices like governor, secretary of state, attorney general and superintendent of public instruction feature good options.

We don’t have to be pollyannas about this. The candidates are, of course, flawed, some more than others. But if we accept how their opponents or outside interests are painting them, we are guaranteeing we will find disappointment where it doesn’t necessary belong — that we will see evil, even if it’s lesser, in good candidates.

Consider bus, streetcar to get to and from Tucson's All Souls Procession

An estimated 120,000 people will walk the procession Sunday evening to honor lost loved ones.

Kirkpatrick to hold Congress on Your Corner events paused by McSally

Anti-Kyrsten Sinema ads try to paint her as a devoted leftist, but she has evolved into a careful moderate, much to the annoyance of liberals.

Attack ads won’t say it, but Martha McSally has been an effective member of Congress and has helped sustain Davis-Monthan Air Force Base.