Steller column: Global shift, Tucson's poor recycling habits are about to cost us
Share this
1 of 6 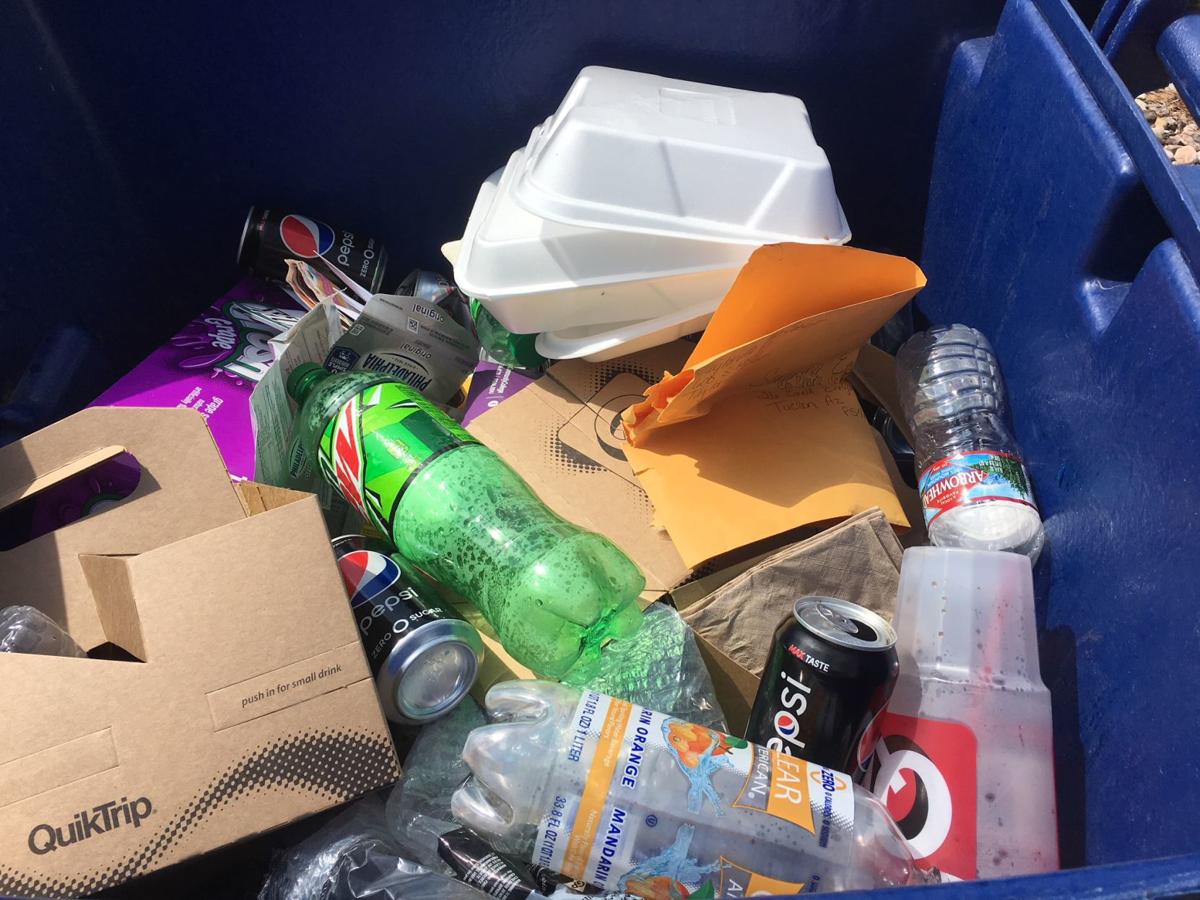 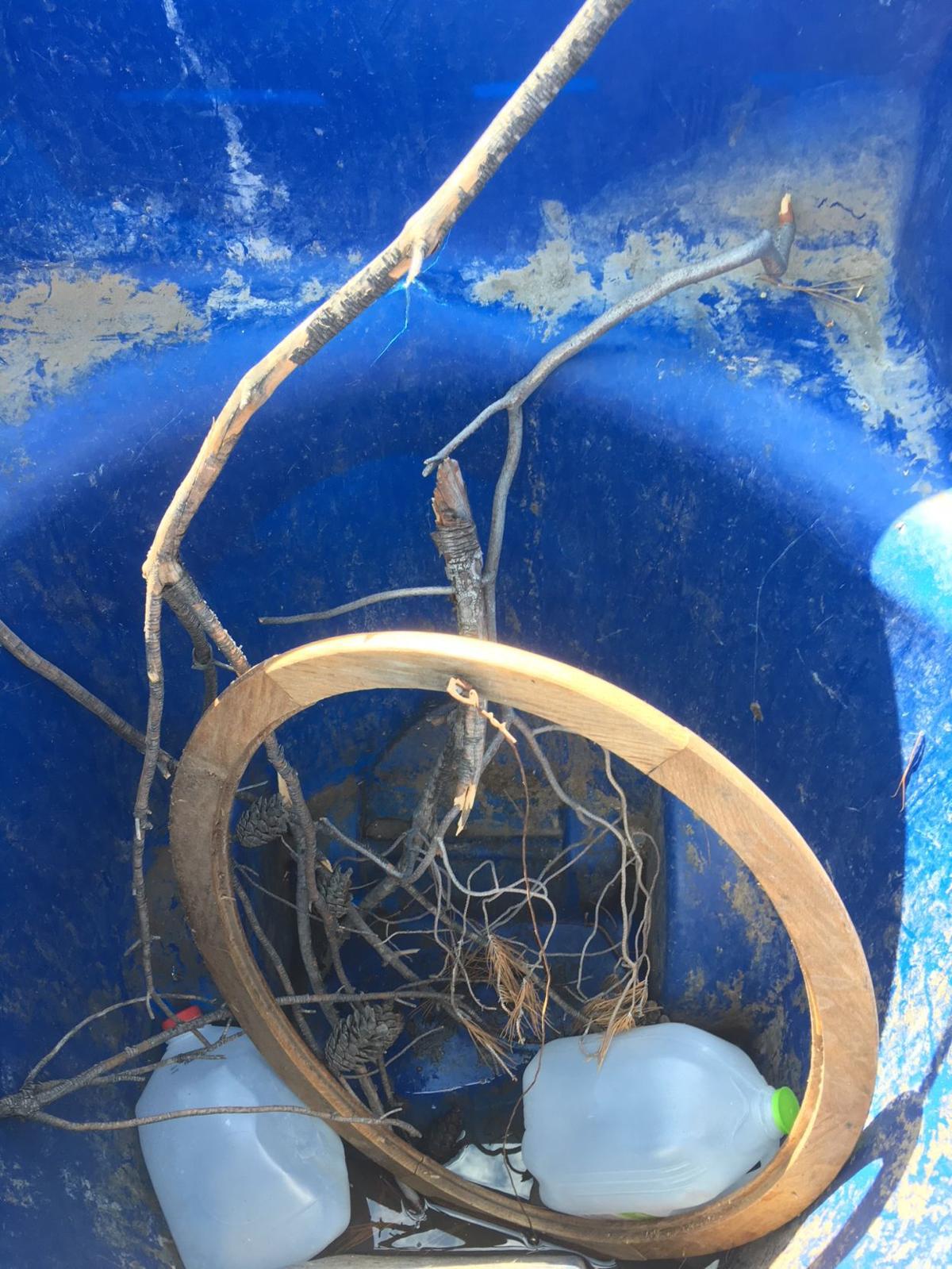 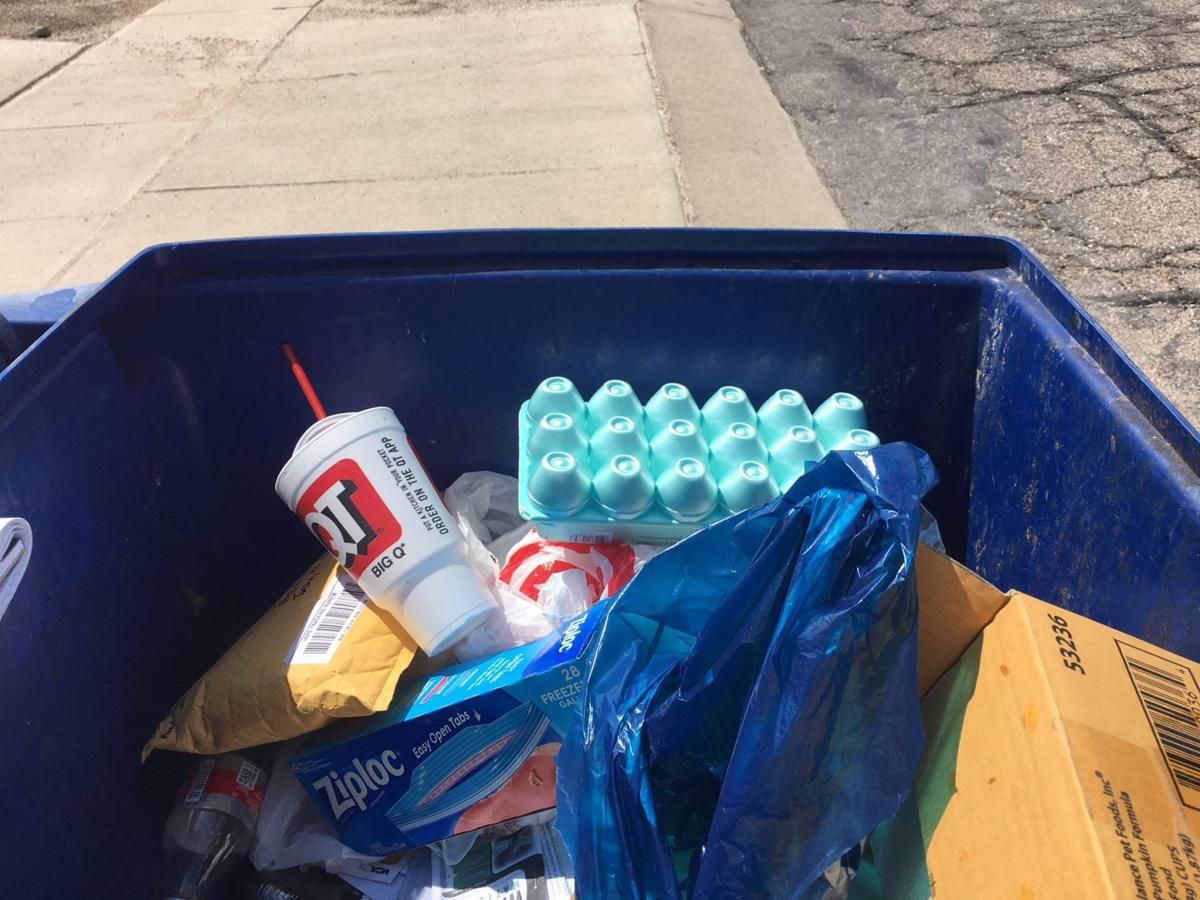 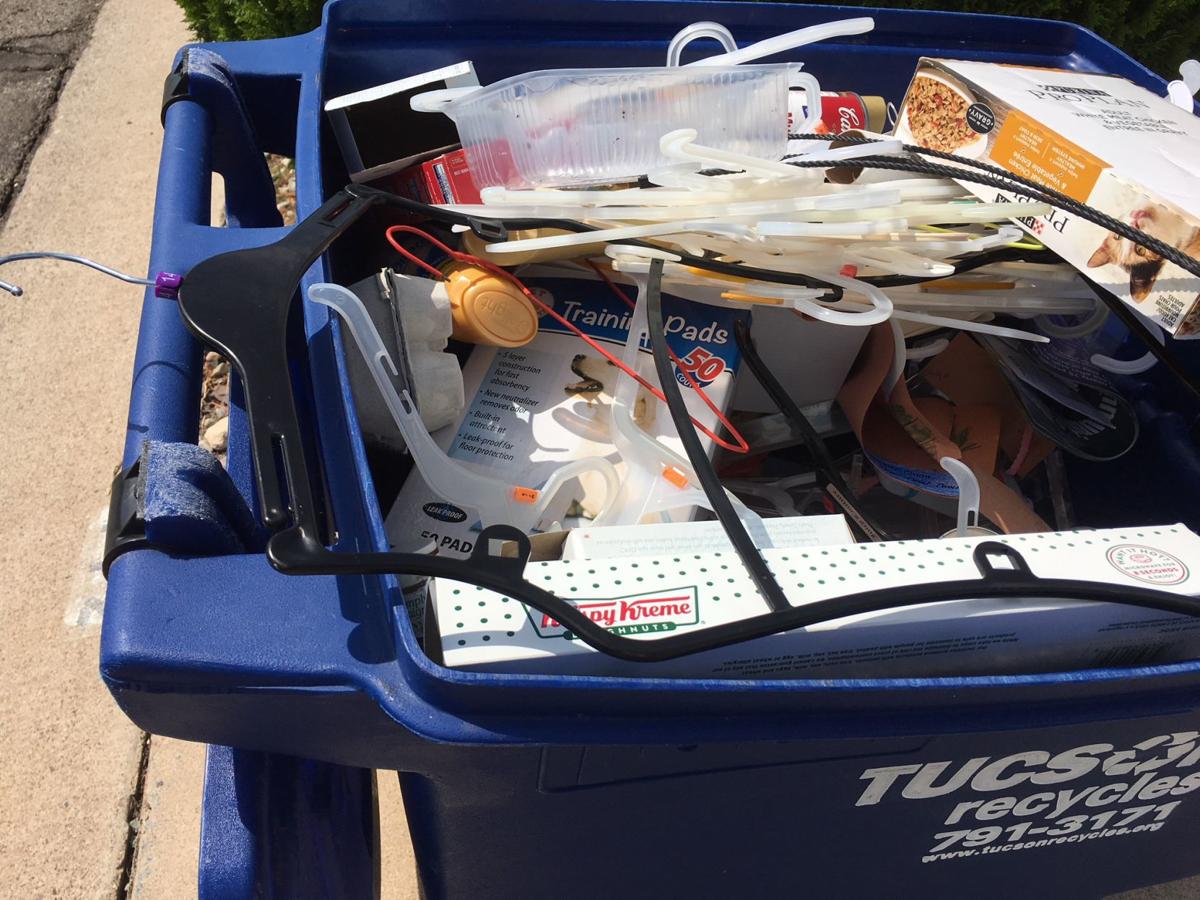 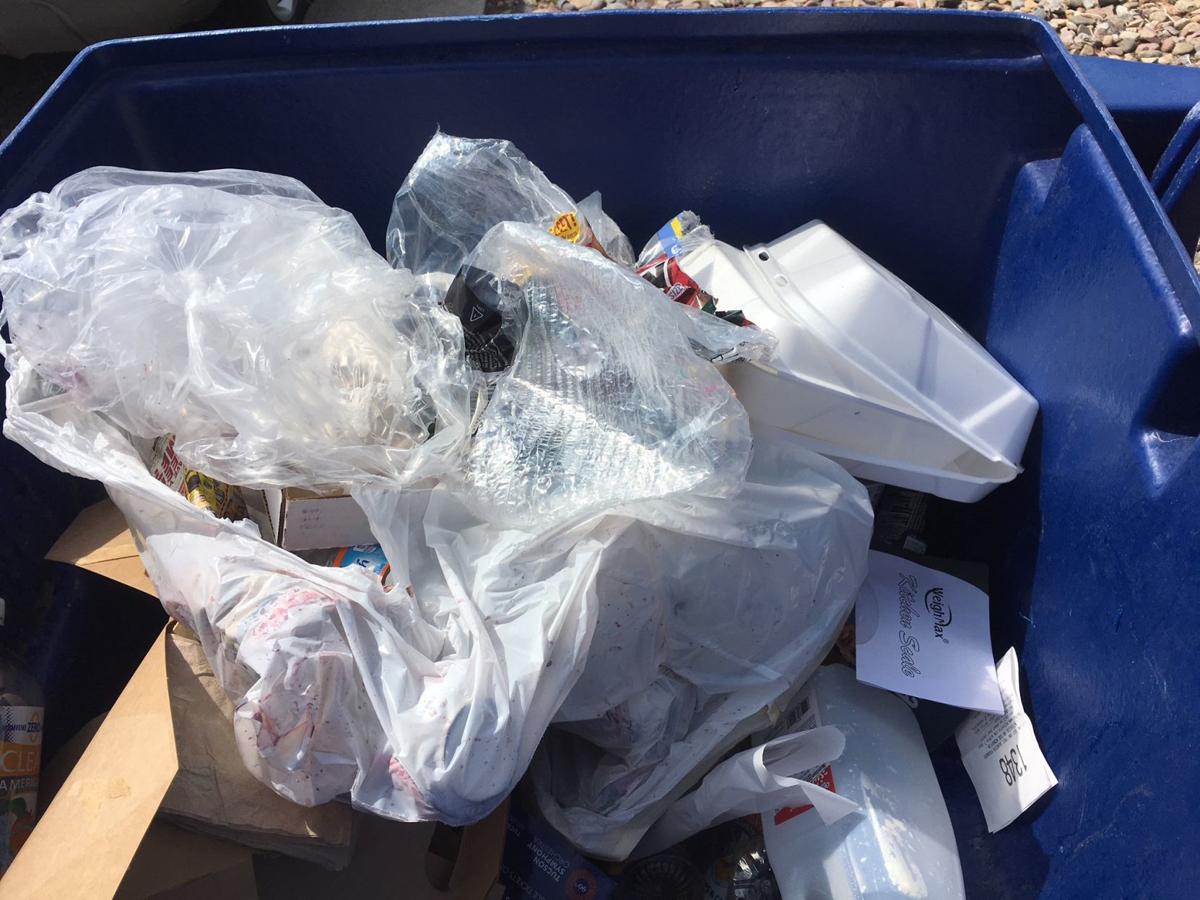 Tuesday morning, I drove east down Broadway until I passed Camino Seco and entered the part of town where recycling barrels were out on the curb for pickup.

Then I parked on South Evelyn Avenue, snapped on nitrile gloves and started digging into the blue barrels.

What I found wasn’t pretty.

You may have read my colleague Tony Davis’ story in Sunday’s paper about this problem of contamination and the issues it’s causing in the global recycling market.

China has imposed a nearly impossible to reach 99.5 percent minimum purity standard — in other words, no more than 0.5 percent contamination in recyclable materials shipped there.

That’s a tough problem for residents of Tucson, where contamination rates have risen from 16 percent to 22 percent over the last seven years. We’re not even close to meeting the standard. Not coincidentally, we’re now losing money on a recycling program that used to make us money. And the city government is considering options for shoring it up.

In a memo sent to the City Council on Monday, the director of the city’s Environmental and General Services Department, Carlos De La Torre, said the city’s recycling contractor wants to raise its fee by 34 percent, from $33.90 per ton to $45.46 per ton. Its contract allows the company, Republic Services, to raise fees to cover increasing costs.

If approved, that increase would force the city to add 26 cents to the existing 45-cent-per-month recycling surcharge paid by residential customers, De La Torre said.

Global dynamics are driving much of the change in the market, and it is leading communities around the country to scale back, charge more, eliminate or otherwise alter their recycling programs. But our own poor performance as recyclers is also part of the problem.

On Tuesday morning, I dug into 11 bins — nine were significantly contaminated.

The first can I looked in had two styrofoam containers and three plastic bags. Not bad, but not good. As I moved on, I found some real head-scratchers. One full bin contained dozens of plastic hangers as well as three plastic desktop paper organizers. When I spoke to the resident, he said he had been cleaning out his kids’ clothes and thought the hangers were recyclable.

We didn’t get to talking about the desk organizers before his daughter dropped a styrofoam container in the recycling barrel and they took off.

Down the street, I opened a very light bin that was sitting on the curb. It contained two empty one-gallon milk jugs — perfectly recyclable plastic — plus, mysteriously, three large branches and an oval wooden frame for a hanging mirror.

I spoke with the homeowner, Jan Swink, who told me she understood yard waste wasn’t supposed to be in the recycling, but she wasn’t sure about the wooden frame.

“I don’t know if that kind of thing is recyclable. It should be,” she said. Overall, she said, “It’s not real clear” what is and is not recyclable.

After I dug through her recycling, neighbor Pat Kaiser told me she gets confused about a few items — such as styrofoam egg cartons.

“Why don’t the people put the eggs in cardboard containers?” she asked. “Other than that, I think I’m OK.”

There was also a styrofoam QT cup in her barrel and some plastic bags, though.

A nearby neighbor, who wasn’t home when I knocked on the door, had the best barrel of all. It was filled with crushed cans of Coors Light and other beers and sodas, along with the cardboard boxes that the 30-packs had come in.

I was going to stop inspecting barrels after 10, but then I saw Ed Godel picking weeds on Evelyn Avenue as I drove back to Broadway. A look through his recycling barrel showed it was pretty good, but he sighed when he realized his wife had put grass clippings in there and pushed the barrel out only about one-third full.

“I don’t normally take it out till it’s this full,” he told me, holding his hand about two-thirds of the way up inside the barrel.

All these details — the Styrofoam, the hangers, the plastic bags, the grass and branches — used to be something we could get away with. But now, with China eliminated as a market for most of America’s recycling, it’s starting to cost us individually.

Customers can help by learning what is recyclable and remembering to throw the higher-value objects into the bin. Those are the plastic soda and water bottles, which are mostly thrown away, and aluminum cans.

The good news is that we are so confused about what to throw in the blue barrels that it shouldn’t be hard to improve a lot.

Here's a look at the top 5 trending stories on tucson.com this morning.

Recycling costs are rising and revenues plunging for the city, due to a loss of Chinese markets.

95 migrants from Central America — including a baby — apprehended in Arizona

After being found to be in good health, they were turned over to Immigration and Customs Enforcement for processing.

'Sorry that I stole from you,' ex-waitress tells Tucson restaurant owner in letter filled with $1,000

A new report says traffic fatalities in Arizona have risen each of the last three years.

Authorities say the group used various methods to distribute drugs across the country.

David Judge, 53, barricaded himself after police say he fired a rifle inside.

The woman was thrown from the motorcycle during the collision, police say.

It's best to call an expert when a baby animal is found.

WASHINGTON – Tucson mom Linda Robles was in Washington last week to demand that the Environmental Protection Agency ban TCE, the chemical she …

Homes and businesses across the globe are using rainwater for a long list of purposes — car washes, gardening, showering — and Tucson is no ex…

To reduce losses for the city of Tucson and make the recycling program profitable and successful, residents should focus their efforts on the easiest products to recycle and those for which there is a market.

Glass, paper might no longer be recycled in Tucson

The Tucson City Council is also being advised to cut back on curbside recycling pickups and to raise monthly recycling fees for residents.