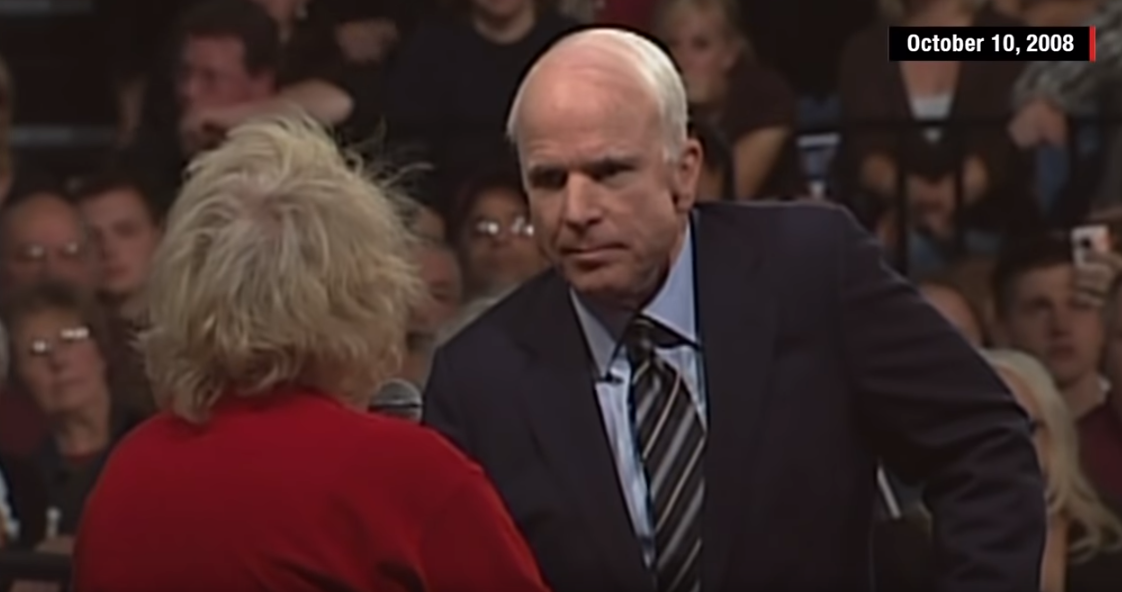 On Oct. 10, 2008, presidential candidate John McCain rejected a supporter’s concern that opponent Barack Obama was an “Arab” who could not be trusted. It was an iconic moment that was more complex than most people appreciate.

The video clip we’ve seen perhaps more than any other since Sen. John McCain died is the one of him at a town hall in the heat of the 2008 presidential campaign.

It’s so iconic and memorable that it seems like we know the story clearly now. We do — and we don’t. There’s so much to unpack in that little incident, its context and subsequent history, that it bears digging into deeper.

You probably know the moment. McCain was in a town hall in Lakeville, Minnesota, on Oct. 10, 2008, when an older woman got the microphone.

McCain grabbed the microphone from her and, to his credit , countered her. When do you see that on the campaign trail, a candidate disagreeing with a voter openly, rather than deflecting or pretending to agree?

“No ma’am,” McCain said. “He’s a decent family man, a citizen, who I have disagreements with on fundamental issues, and that’s what this campaign is all about.”

The simple way of looking back on that episode is that it showed McCain refusing to demonize his opponent. What’s less visible, if you just see that clip, is the immediate context in the campaign, and the longer-term context of populist rage within the GOP.

First, it’s noteworthy how McCain understood what the woman meant without her really saying it. She said, “He’s an Arab,” when she probably meant “Muslim.” And he quickly grasped the point she was feeling for — that Obama was an untrustworthy “other,” perhaps even an enemy of America. In fact, that woman, when asked to explain what she meant after the town hall, was as direct as possible: “You can’t trust Barack Hussein Obama because he is a Muslim and a terrorist.”

But here’s the twist: Where would she have gotten that idea? Despite the credit McCain gets and deserves for his response, his campaign was actually trying to spread that caricature of Obama just as he was tamping it down.

Here’s how the reporter from the Minneapolis Star Tribune opened his story about that campaign appearance: “Struggling to contain an emotional fire his own campaign kindled, Republican presidential nominee John McCain spent much of a town hall meeting in Lakeville on Friday trying to cool his supporters’ growing hostility toward Democrat Barack Obama.”

The McCain campaign had just put out an ad linking Obama to terrorism through William Ayers, leader of the Weather Underground and later an adviser to Obama. At the same time, McCain’s running mate, Sarah Palin, was accusing Obama of “palling around with terrorists.”

McCain clearly grasped what was going on among the rank-and-file GOP partisans. There was a growing fear of and anger against Obama. He tried to stoke it just enough to win, but not let it get it out of control. It couldn’t be done. In 2012, Mitt Romney refused to stoke the rage and lost. In 2016, Donald Trump poured gasoline on it, let it run wild and won.

In his farewell letter released this week, McCain was continuing to grapple with these divisions that his campaign tried to stoke but his personal constitution rebelled against. He deserves credit for recognizing the problem, fighting it and appealing to us to overcome it even after he’s gone. In the farewell, he said:

“We are three-hundred-and-twenty-five million opinionated, vociferous individuals. We argue and compete and sometimes even vilify each other in our raucous public debates. But we have always had so much more in common with each other than in disagreement. If only we remember that and give each other the benefit of the presumption that we all love our country we will get through these challenging times. We will come through them stronger than before. We always do.”

During the 2008 presidential campaign, Republican John McCain's campaign tried to both stoke and restrain anger against opponent Barack Obama.

David Gowan, who was dogged by allegations that he used state vehicles to boost his failed congressional campaign, led Republican Rep. Drew Jo…

Winner of GOP primary will be uncontested in November.

Mayor will be selected once new council is in place.

PHOENIX — Secretary of State Michele Reagan found herself unable to hold onto her office Tuesday night, after spending the campaign defending …

Satish Hiremath was behind in his try for third term as mayor.

Storm chances are expected to increase this weekend.

Tweens visiting the library have their own area at the newly renovated children's room at the Joel D. Valdez Main Library in downtown Tucson.

Contractor denies it's to blame for Phoenix-area voting problems

A Rio Rico man was sentenced to 82 months in prison for the possession of ammunition by a convicted felon, and for smuggling it into Mexico, o…

Westbound I-10 reopens south of Chandler after fatal crash

Authorities have reopened two lanes of Interstate 10 south of Chandler after a fatal crash Wednesday morning.

"Name your own price" adoption promotion at PACC starts today

PACC is currently home to 700 animals.

WASHINGTON — John McCain's 106-year-old mother, Roberta, is expected to attend memorial services in Washington and his burial in Maryland late…

A Pima County Sheriff's deputy discovered the remains of a man missing nearly a month after he left his Tucson home.

On Oct. 10, 2008, presidential candidate John McCain rejected a supporter’s concern that opponent Barack Obama was an “Arab” who could not be trusted. It was an iconic moment that was more complex than most people appreciate.