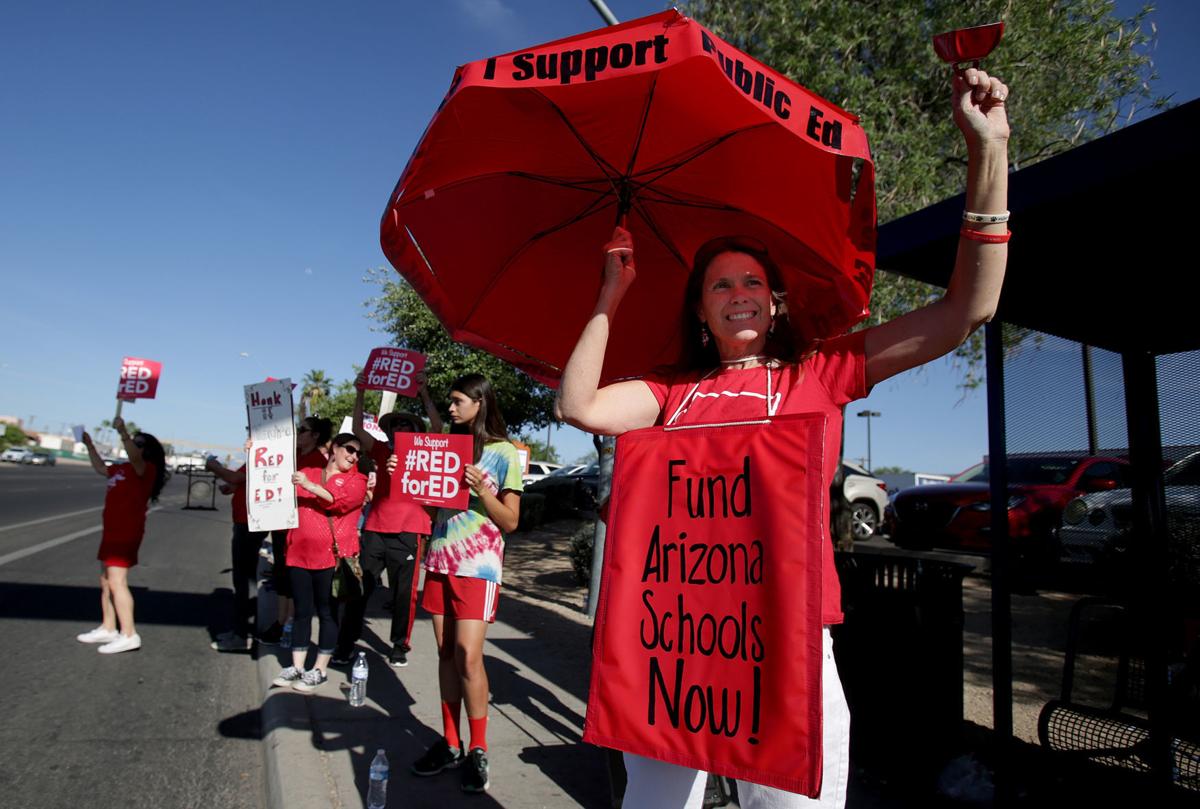 Jennifer Powers, a teacher for 25 years with Amphitheater Public Schools, was one of hundreds demonstrating on Wednesday. 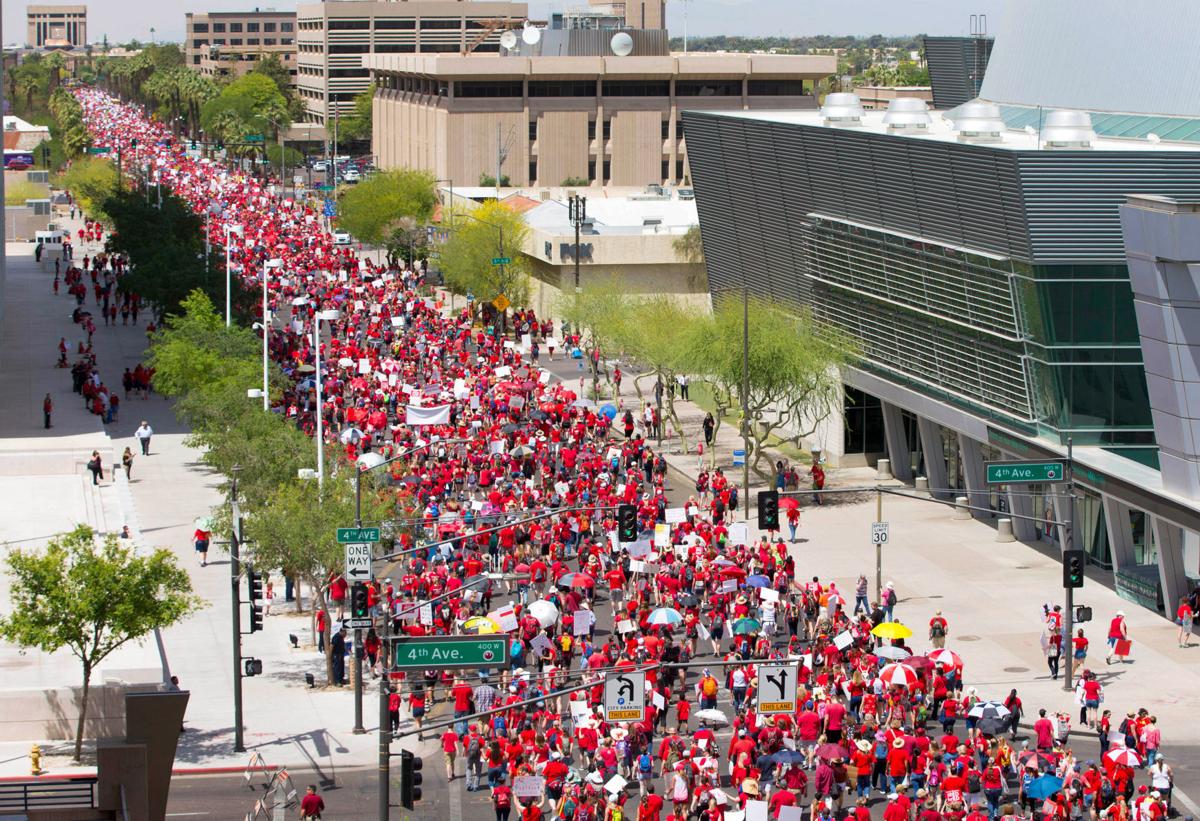 More than 50,000 teachers and their supporters marched on West Jefferson Street in Phoenix on their way to a protest at the Capitol in Phoenix.

Sonoran Science Academy was open all last week, and, yeah, the parents were happy.

I talked with a half-dozen of them as they dropped off their kids at the charter school on East Broadway Friday morning. To a person they supported the #RedForEd movement’s demands for higher teacher pay and more school funding, but when it came to the walkout that their school had avoided, they had mixed opinions.

“I don’t think it’s fair for the parents,” said Kim Alegria, mother of a first-grader. “I’m not opposed to the teachers wanting to be paid more.”

That’s the bloc of opinion that striking teachers must worry about as they look ahead to a week that could determine the success or failure of the strike. A significant swath of the state’s populace sympathizes with the plight of the teachers and wants more money for public schools but is skeptical about the burden that the walkout puts on others.

That burden was relatively easy to bear last week, but it will grow heavy this week and the longer the walkout lasts, on school employees themselves as well as parents and employers. Knowing the way to end the walkout is tough, though, because the governor has refused to negotiate directly with the leaders of the teachers’ movement. The two sides are like taggers writing graffiti on the same wall on alternating nights.

Early in the movement, the teachers made five challenging demands. In response, the governor came up with his 20-by-2020 plan, which would lead to a 9 percent increase in teacher pay next school year while also increasing school funding. There’s no way the governor would have come up with this plan without the teachers’ movement, so it is a tentative win for them.

But now a new tagger has shown up and sprayed an alternative idea on the wall: A ballot initiative that would raise income taxes on those making more than $250,000 per year. That’s forcing the teachers’ movement to decide: Is the Ducey plan and the ballot initiative enough to end the strike before public support starts to erode?

The confidence was still pretty strong downtown on West Congress later Friday morning when I walked among the crowd. Hundreds of red-clad teachers were chanting and cheering at the honks from passersby. In the crowd, it felt deceptively like unanimous public support.

“I think this is such an important issue that we need to stay out till our demands are met at a reasonable level,” said Oliver Bowen, a social studies teacher at Marana Career and Technical High School. Describing the years of tax cuts and reduced spending Arizona has gone through, Oliver said, “It’s now time to reverse those efforts of the Tea Party and ask them to contribute.”

Allison Clark, a teacher at Mansfeld Middle School, told me, “I’ve never been part of anything like this before” as she stood contentedly among the crowd in front of the old Hotel Arizona Friday morning. But she could also see the difficult days ahead. Her last available day of sick leave is Monday. After that, if she’s still not working, she’ll likely be violating her contract.

“This is where it’s going to get tough and nitty-gritty,” she said.

The ballot initiative announced Friday, called Invest in Education, offers a way out. It would raise the income tax rates on Arizona residents making $250,000 per year or more to levels last seen in the 1990s. David Lujan, director of the Arizona Center for Economic Progress, predicted it would raise around $690 million per year.

It is possible that leaders of the teachers’ movement will call off the strike in favor of pursuing this initiative. That would be an anticlimactic end since the initiative doesn’t meet all their demands and still must be approved by voters. There’s no immediate 20 percent raise, no promise to stop future tax cuts, no commitment to increase the pay of classified staff.

On the other hand, it does provide a new, dedicated source of money for increasing teacher pay in the long run, and would come close to restoring the cuts to education spending that have accumulated in the last decade. It might be a smart way out.

When you consider the surprising extension of the Prop. 301 sales tax by the Legislature this year and the likely passage of increased funding for the governor’s 20-by-2020 plan, this income tax increase on top would make Arizona more like a normal state — or at least more like its old self — in its funding of education.

Also, the proposed tax increase, though wonky in its details, represents a partial rejection of the last 10-plus years of state policy. The governing philosophy has been to cut corporate and other taxes, hope the economy grows, funnel increasing amounts of public money to private education, let the districts figure out how to deal with the fallout, and punish them if they fail.

The initiative would create a new stream of money for education without raising the sales tax, which is already high and disproportionately affects poorer people. It would also tax those who have benefited most from Arizona’s tax-cutting tear of the last decades, as the tax burden shifted to those paying sales taxes.

And, practically speaking, it would give teachers something to do with their mobilized energy. Going out and chanting “red for ed” will get old as the days go by. Getting signatures to put an initiative on the ballot means doing something productive. So does campaigning for the initiative.

If teachers stay out, the school districts that have been accommodating and sympathetic this far may be forced to turn stricter. They are confronting having to add days to the end of the year, wondering whether furloughs will be required to keep their budgets on track. They’re also facing possible lawsuits from the Goldwater Institute over their decisions to close schools.

Yes, sacrifices are part of any strike, but they’re only worth it if there is a path to victory. The Legislature and governor aren’t going to give teachers an immediate 20 percent pay raise, as demanded. Any promise they make to stop cutting taxes is worthless.

But the initiative, if organizers can put it on the ballot and get it passed, would represent real money for education as well as a symbolic rollback of what’s caused the state’s school crisis in the first place. It could be a good place for teachers to turn their focus.

Sarah Gassen: Teaching can't be only about the kids

We're in this together.

The rally begins at 4 p.m. at Armory Park, across from the Tucson children’s Museum, in the 200 block of South Sixth Avenue.

Letter: Re: the April 28. article “Steller column: Initiative could be a good way out of teachers' strike”

This "initiative" is straight from the Democrat's playbook. Soak the rich as they never pay enough. I am not within the $250,000+ realm of the…

Education funding initiative seeks volunteers to get measure on the ballot

The initiative would raise income taxes on Arizona's wealthy.

Jennifer Powers, a teacher for 25 years with Amphitheater Public Schools, was one of hundreds demonstrating on Wednesday.

More than 50,000 teachers and their supporters marched on West Jefferson Street in Phoenix on their way to a protest at the Capitol in Phoenix.