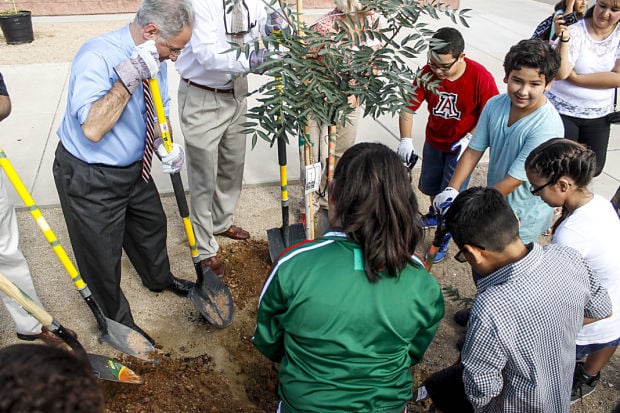 Perhaps Kris Yarter was exaggerating a bit when she said it, but any tree-lover will hear a ring of truth in her sentiment.

There’s “nothing worse than a man with a gas-powered pole saw,” Yarter told me via Facebook.

And that’s the way it felt Feb. 20 when a city environmental-services crew went through her midtown neighborhood and practically denuded a tree she and her son planted 18 years ago in a traffic circle. They slashed branches from the mesquite and left her “devastated,” she said. The tree had personal meaning, of course.

But it turns out this is not just the isolated concern of one Tucson tree-hugger. On any given day, employees from a half-dozen city departments and other agencies might be out pruning trees. Their ability to do it varies wildly from department to department and crew to crew.

Far too often, the men with the gas-powered pole saws leave what’s known as “lion tails,” a narrow poof of vegetation on what used to be a rounder, healthier head of vegetation. That can damage or even kill the tree.

“When you prune up the branches so high, it exposes their bark to the sunlight,” said Yarter, a retired high school biology teacher who has studied plant science. “Once the summer comes, you get burning and blistering. It affects the internal vascular system.”

This is especially counterproductive when you consider the various efforts made in recent years to increase Tucson’s tree cover. The idea is that the trees can make a desert city like ours a lot more tolerable and limit the overheating caused by the warming climate.

Tucson Clean and Beautiful, which operates the Trees for Tucson program, is aiming to plant a million trees over the next two or three decades. The idea in part is to increase tree cover from about 8 percent now to around 20 percent of the city’s land area. It’s also to replace the trees that inevitably die from natural causes and increasing heat.

Last summer, you may recall, I wrote about the expanding die-off of Aleppo pines, those Mediterranean transplants that were popular in Tucson starting in the 1950s. In part, the pines are having trouble with the increasing heat in Tucson, but they are also simply getting watered less as a result of the widespread movement toward xeriscaping that doesn’t require much water. When there’s no grass to water, the pines don’t get accidentally irrigated.

Katie Gannon, interim director of Tucson Clean and Beautiful and one of the city’s most prolific tree-planters, has been organizing tree-plantings in different neighborhoods. Most recently it was 100 of them in the West University neighborhood.

The problem, then, comes when trees get overgrown or are disturbing streets and other rights of way. The city agencies that prune trees include Transportation, Environmental Services, Tucson Water and Parks and Recreation.

Then there are contractors who do landscaping work for the city, and of course there is Tucson Electric Power, perhaps the crudest tree-cutter of them all. Yes, TEP has to make trees safe for power lines, so the utility has an excuse for its sometimes brutal pruning.

But other agencies don’t have the same requirements, and Gannon said a tree should never lose more than 25 percent of its bulk at a time.

City Councilman Steve Kozachik has called for tree-pruning and management to be consolidated under one office, so there isn’t so much inconsistency.

“It’s a Keystone Kops approach to landscape maintenance where everyone is doing their own thing,” Kozachik said. Neighbors “see a guy come through and ruin 20 years of hard work.”

“You can kill them (trees) or make them look stupid,” he said. “At some point, the city’s got to own up to the fact that people care about the landscaping in their neighborhoods. It’s not a small issue. It’s a quality-of-life issue.”

He’s asked the city to put management of trees growing in public areas under one office, and the bureaucracy is working on it.

Brent Dennis, the Parks and Recreation director, has been asked to oversee centralizing tree maintenance. It helps that Dennis is a landscape architect by training.

He has started work on establishing pruning and maintenance guidelines and plans to introduce training for crews who do the work when the guidance is done.

But there are complexities to the program that go beyond coordinating a variety of agencies. Different neighborhood residents want trees dealt with differently, city spokesman Andy Squire said. While a midtown neighborhood might typically want trees maintained gently in the right-of-way, an east-side neighborhood might want the tree cut down, said Squire, a former aide to Councilwoman Shirley Scott.

In any case, it’s long past time to ask Tucson’s landscapers to lower their gas-powered pole saws and realize many of those branches are fine as they are and even play an important, cooling role.

PHOENIX — A Bullhead City woman has been sentenced to nearly three years for trying to drown her infant daughter in Lake Mead.

Another beautiful day for Tucson, as promised.

Amid clouds of dust, border wall prototypes are demolished

City of Tucson asphalt crews are working to complete some of the more than 300 maintenance work orders around the city this week, officials say.

One person has been taken to a hospital after a three-vehicle collision involving a school bus on Tucson's southwest side Wednesday night, aut…