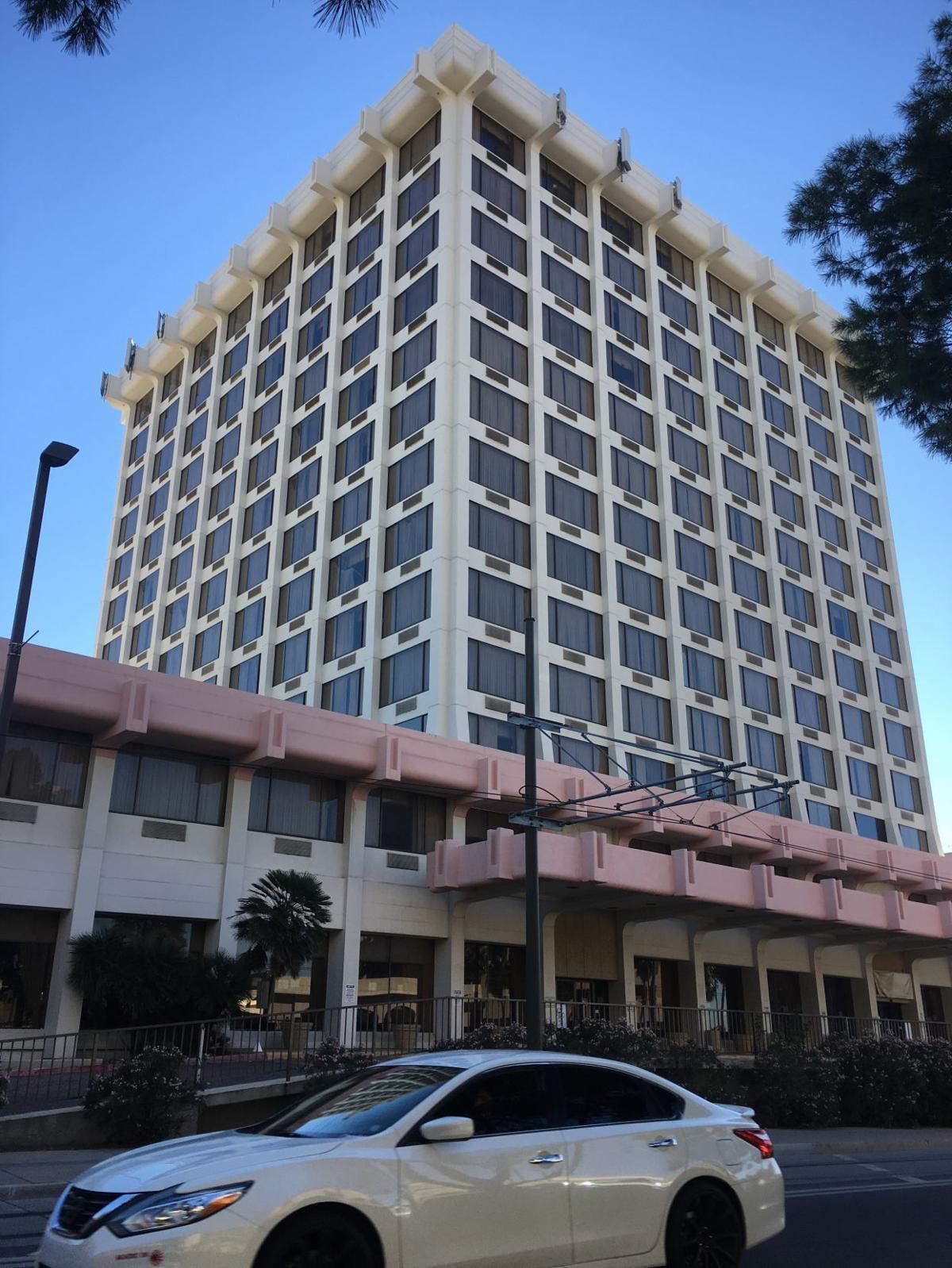 The former Hotel Arizona closed in 2012 after the city rejected a taxpayer-subsidized deal. 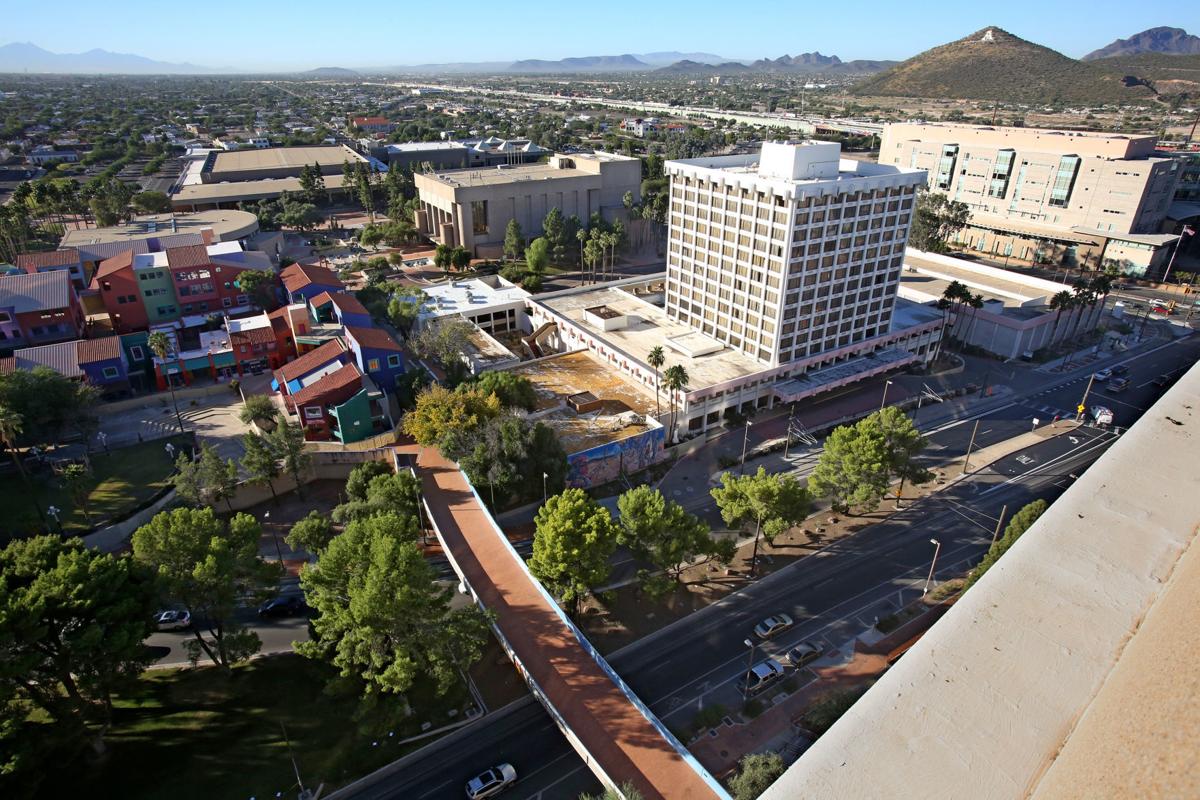 The former Hotel Arizona could be remodeled with a fewer number of rooms, some converted into suites.

The good news keeps rolling in about planned hotel developments in downtown Tucson.

Two Marriott brands, Moxy and Element, are scheduled to have 249 rooms in a tower on East Broadway behind the Rialto Theatre.

And Caliber Hospitality is planning to put an as-yet-unbranded 170-room hotel on the southeast corner of the Tucson Convention Center property.

Throw in the newly built, 136-room AC Marriott at 151 E. Broadway, and that would be about 750 new rooms. Great news, but as I read my colleague Gabriela Rico’s reports on all these new projects, something kept nagging at me. A project was missing.

And then I remembered: The big, white elephant in the middle of downtown.

The former Hotel Arizona, the one-time anchor hotel of the Convention Center, remains empty. It closed in 2012, after owner Humberto S. Lopez failed to convince the city to give him a taxpayer-subsidized deal to rebuild or renovate the hotel.

It’s been closed for six years now, and time is passing it by. The booming downtown hotel market may be passing it by, too. If the owners, HSL Properties — now led by Lopez’s nephew, Omar Mireles — don’t get around to redeveloping the site soon, they may find it’s too late.

”There will be a point, and I don’t know what that point is, when we’ll be saturated,” Mayor Jonathan Rothschild told me. “A lot of it depends on what gets built first.”

Now, Mireles & Co. are not just sitting on their hands. They of course know they have a valuable property there with high potential, even if it is run-down now. They are first building an apartment complex called The Flin, next door on the now-demolished La Placita property.

HSL is reimagining the whole block on which the Hotel Arizona sits, Mireles said.

The parking garage, for example, which sits at the corner of West Broadway and South Granada Avenue, occupies a prominent site —too prominent for a parking garage. It could be torn down and rebuilt elsewhere on the property, Mireles said.

He wouldn’t describe the current plan for the property in detail, but said the hotel would not be torn down and instead would be renovated with fewer rooms, so that suites could be added. It would go from 309 rooms down to about 280.

Mireles is convinced there is plenty of capacity left for new hotels downtown. He noted that the more hotel rooms there are, the bigger the conventions that the TCC can handle. It’s a positive feedback loop, known as induced demand, accelerated by the fact that the Rio Nuevo district just approved up to $50 million in upgrades for the Convention Center.

And yet, there’s history that makes you wonder if HSL will beat the end of this upswing in the downtown hotel market. Back in 2011 and 2012, Lopez asked the city for a 20-year tax abatement to help pay for the a renovation. When city council members balked, Lopez  closed the hotel altogether.

“They needed us to give what are in my opinion excessive incentives,” Kozachik said.

Among the proposals: A 20-year tax abatement from the city. Kozachik said that and other requests amounted to more than other, similar projects downtown are getting.

“We told them, ‘We’re not giving you any more than we’ve given anyone else’. We haven’t heard anything more.”

Others, of course, have already made it work. Partners Scott Stiteler and Rudy Dabdoub got the 136-room AC Marriott built at 151 E. Broadway. They are the same partners pursuing the Moxy/Element project just a block east on Broadway.

“Getting from pretty picture through the banks in 2019 and beyond, only the best projects are going to be approved,” Stiteler told me. “Banks scrutinize everything. They’re very good at it, better than they’ve ever been. They ask great questions. They’re not in the risk game.”

“The reality is that financing these projects is not getting easier given the fact that the interest rate environment has really changed. Construction costs have really increased pretty significantly as well,” he said. “A lot of lenders are taking a cautious approach, specifically with the hospitality sector.”

These are all reasons Tucson should be eager for HSL to move forward on a plan for the old Hotel Arizona. Now is the opportune time, and our experience downtown tells us it won’t last long.

This column has been updated to remove references to a Sheraton Hotel plan for downtown Tucson that was not an HSL proposal.

El Conquistador courses have lost about $1 million a year.

The simplest way to interpret the failure of Prop. 463 is that voters don't actually prioritize road repairs as much as they say they do

A trip down Watergate lane in November gave columnist Tim Steller a sense of deja vu.

It would help heal a wound in a site that some consider sacred.

The former Hotel Arizona closed in 2012 after the city rejected a taxpayer-subsidized deal.

The former Hotel Arizona could be remodeled with a fewer number of rooms, some converted into suites.