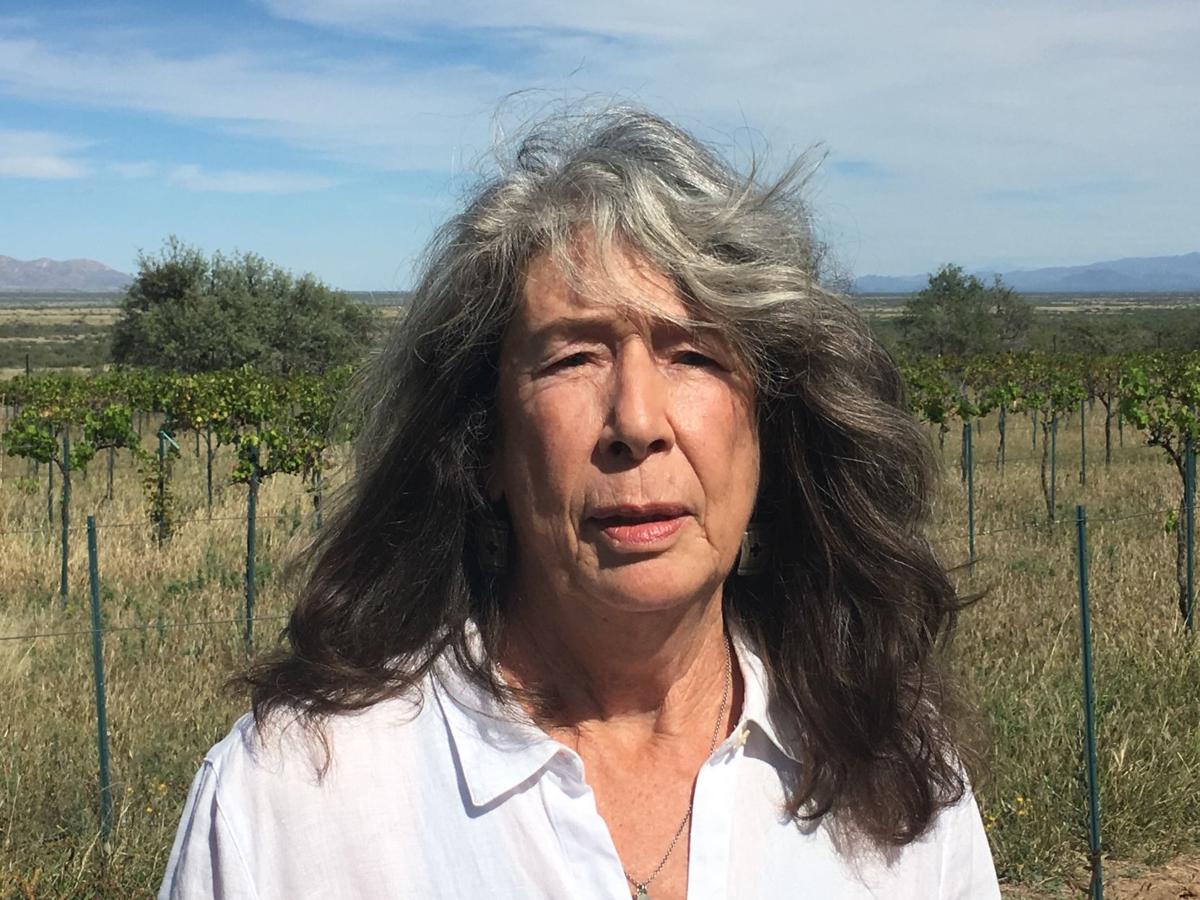 Melissa Owen lives 4ƒ miles north of the border. Despite run-ins with smugglers and border-crossing migrants, she says troop deployments to the border are a bad idea. 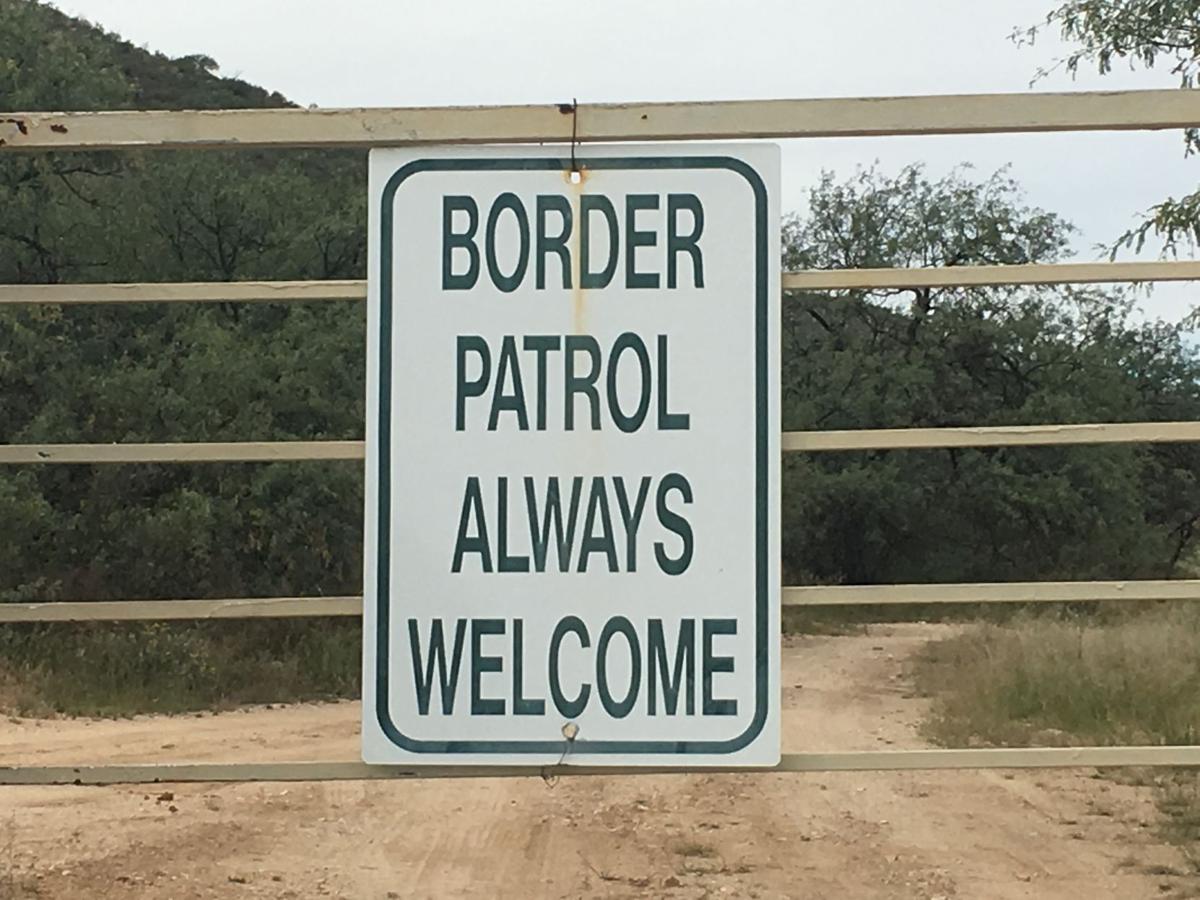 A sign at the gate to Melissa Owen's ranch reflects her appreciation for how responsive Border Patrol agents are at her remote, Sasabe-area property. 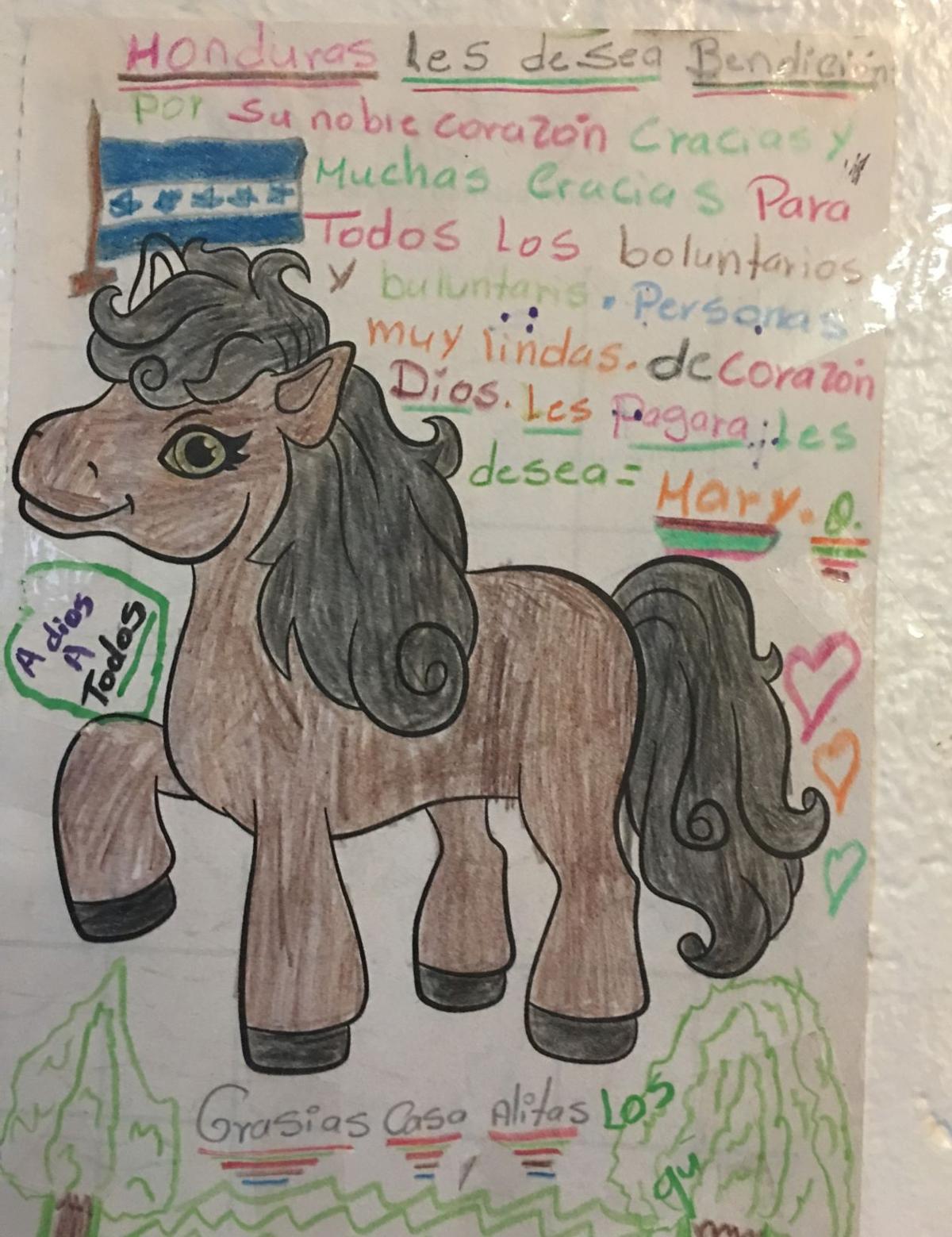 A Honduran child's coloring, on the wall at Casa Alitas in Tucson, gives thanks to the people who have helped them after requesting asylum in the United States.

SASABE, Ariz. — Now we know just how far President Trump is willing to go to keep fear alive in the run-up to the midterm elections.

Even from the porch of Melissa Owen’s isolated ranch house, 4 miles north of the border near Sasabe, the idea of sending 5,200 soldiers to the Mexico-U.S. line looks ridiculous. Owen’s house is surrounded by a chain-link fence topped with razor wire, and the gate has a sign that says “Border Patrol always welcome,” so Owen is thoroughly aware of the problems that illegal border crossings can bring.

Still, she scoffed at the latest announcement by Trump when I visited her Tuesday.

Of course, the current justification for sending the troops is the migrant caravans that have sprung up, grown, shrunk, split and joined together in Central America and southern Mexico.

Previous large groups walking from Central America have had no known effect at the Rancho Sierra Vista de Sasabe, Owen said. She has seen traffic dwindle from regular groups of 20 to 40 migrants 10 years ago to, now, seeing Border Patrol agents chase apparent smugglers maybe once every 10 days.

It’s not what you’d want in this spot that is otherwise a slice of high-desert heaven, but she has faith in the Border Patrol agents who work the area and no fear of an “invasion” of Central American migrants. That’s what Trump called it as he escalated his alarmist rhetoric Monday and Tuesday, apparently seeking to activate the fear reactions of his supporters in the run-up to Tuesday’s election.

On Twitter, he said: “Many Gang Members and some very bad people are mixed into the Caravan heading to our Southern Border. Please go back, you will not be admitted into the United States unless you go through the legal process. This is an invasion of our Country and our Military is waiting for you!”

The catch that undermines Trump’s entire point is that “unless” clause — “unless you go through the legal process.” That’s exactly what asylum-seekers are doing. It’s legal, not illegal, to come to the United States and request asylum. One would hope that any “Gang Members” or “very bad people” would be caught in the vetting of these asylum-seekers.

That’s exactly where Trump ought to be ordering additional personnel, if he’s going to be sending them anywhere. We ought to have 5,200 more people assessing asylum cases —or, let’s say, 2,600 processing asylum cases and 2,600 building new detention or temporary residential facilities for asylum-seeking families. That’s where the real need is.

After all, under current laws, there is nothing different soldiers can do from what Border Patrol agents can do to stop people from requesting asylum.

Once people request asylum, they are put into cells and investigated as to whether they actually have a “credible fear.” If not, they’re returned to where they’re from. If so, they may be placed in a detention center while they have a removal hearing and present their asylum claim, or they may be released, ordered to check in with ICE and go stay with family members or whoever can host them while they appear in the nearest immigration court.

Without changing the asylum laws, what we can do something about is speeding the process so that people aren’t released into the country with uncertain prospects for showing up at court.

After driving back from Owen’s ranch, I swung by Casa Alitas, one of three houses in Tucson where asylum-seekers spend a couple of days before traveling to stay with relatives, usually, and attending immigration court dates.

One family I spoke with is from Guerrero, Mexico, but had lived in Alabama for more than a decade. The parents had no legal status when they were told to leave seven months ago. But their young children are English-speaking citizens. When I interviewed the parents, in Spanish, they told me that after 15 years living in Alabama, they were forced to return to Guerrero, in southern Mexico. They found their home state transformed by violence and practically run by criminals. They left without telling anyone.

They, like a Honduran woman I interviewed, would not give me their full names, out of fear of the damage the gangs could do to family members back home, or potentially to them up here.

The 21-year-old Honduran told me she had just completed a two-week journey from her home in the country’s capital, Tegucigalpa. Unable to even set up a fruit stand without paying protection money to gangs, she left with her 5-year-old daughter. They walked for 10 days and took buses for five days, she said, crossing Guatemala largely on foot.

At Nogales, they requested asylum and spent a couple of days detained, but she was told to go to Georgia and attend court there, when her relatives actually live in Houston. She’s trying to work out the discrepancy.

Undoubtedly, there are more menacing, less sympathetic people in the caravans, along with many like these. Still, Owen, who has firsthand experience with tattooed smugglers crossing her property, said of the military deployment: “I don’t think it’s what we need at all.”

“Are we going to keep troops on the border indefinitely? What happens after they leave?”

These are questions you don’t have to ponder if your point is simply to get out a few more voters in the last days before an election.

PHOENIX — A court ruling says the state Department of Economic Security can seize money given as a gift to a prison inmate who owes child support.

Parcels of Arizona Trust Land, including 30 acres in Tucson, to be auctioned

The proceeds will be invested in a fund benefiting K-12 public education.

PHOENIX — A seriously injured 53-year-old woman was rescued after spending six days in the desert, including time in her vehicle which was hun…

Trump: Number of troops sent to border could reach 15,000

WASHINGTON — President Donald Trump said Wednesday that the number of military troops deployed to the U.S.-Mexican border could go as high as …

Davis-Monthan, Fort Huachuca will house troops being sent to border

Southern Arizona's two military installations are preparing for an influx of troops being sent to the US-Mexico border, a deployment that President Donald Trump said Wednesday could reach 15,000 service members.

U.S. troops sealed off two lanes at a Nogales port of entry Wednesday, as they continued to hang razor wire on the border fence.

Melissa Owen lives 4ƒ miles north of the border. Despite run-ins with smugglers and border-crossing migrants, she says troop deployments to the border are a bad idea.

A sign at the gate to Melissa Owen's ranch reflects her appreciation for how responsive Border Patrol agents are at her remote, Sasabe-area property.

A Honduran child's coloring, on the wall at Casa Alitas in Tucson, gives thanks to the people who have helped them after requesting asylum in the United States.