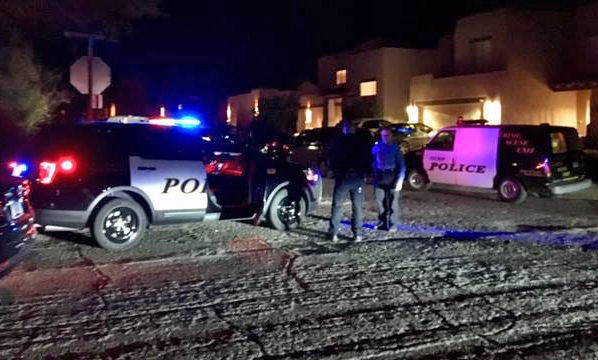 The sound of gunshots coming from inside a neighboring home would surprise residents of almost any Tucson-area street.

It shouldn’t, though, no matter where you live. Tucson has a crime problem, as we all know, and it has a murder problem.

But even more specifically, what Tucson has is a domestic-violence killing problem, one that seems to be getting worse this year after a bad 2018. And it can happen in any part of town, among any sort of people.

On Jan. 25, residents of a go-nowhere street on the far east side, East Fenceline Drive, heard gunshots from inside the home of Cindi and Andrew Wiley.

Cindi Wiley, 49, a nurse practitioner, had told her husband she was going to leave him, friend Stephanie Kelly told me this week. Cindi texted Kelly that day that “the begging and crying is getting old,” said Kelly, a fellow nurse practitioner.

That suicide shot often changes the perception of these cases, turning them into impenetrable and dismissable domestic disputes. But at their base, most of these murder-suicides are simply murders.

In 2018, there were 53 killings in the city of Tucson. The most common known scenario was domestic violence, which accounted for 11 of the 53 homicides, or 21 percent. That was up from eight domestic-violence killings in 2017. By comparison, there were nine killings that resulted from fights in 2018, Tucson police reported, and seven that were drug-related.

Even in a city as drug-drenched as Tucson, domestic violence was a more homicidal phenomenon. Then came 2019.

On Jan. 6, Leticia Freitag shot and killed her estranged husband, Michael, in the home they had shared in the 7200 block of East Elbow Bay Place, near East Broadway and North Kolb Road. She said it was a self-defense situation, but she was indicted on a charge of second-degree murder.

On Feb. 5, Steven Ross, 60, shot and killed his wife, Cheryl, 59, in their apartment on North Pantano Road, then killed himself.

On Feb. 15, Dee-Lora Lopez, 23, and her brother Jubi, 21, got into an argument in their home in the 100 block of West Valencia Road. Dee-Lora stabbed her brother to death, police said, and was accused of first-degree murder.

On March 5, Ethan Lindauer shot and killed his girlfriend, Genevieve Comeau, 25, in the house they shared in the 1000 block of East Hedrick Drive, near East Fort Lowell Road and North First Avenue. Then Lindauer killed himself.

Outside of Tucson proper, there was also the death Feb. 12 in Oro Valley of Laurie Draegeth, 40. Her husband, Trevor Draegeth, 37, told police his wife had killed herself, but investigators later concluded she had wanted to leave him, and they accused Trevor Draegeth of first-degree murder.

Counting the killing of Cindi Wiley, that’s five domestic-violence killings out of 11 that have occurred in the city of Tucson so far this year. It’s a stunning pace when you think about it, but it’s just extending last year’s pattern.

James Gierke, the head of Homicide Survivors, and Ed Mercurio-Sakwa, who leads the Emerge Center Against Domestic Abuse, both recognized, when I spoke with them, a tendency for the public to dismiss murder-suicides as a sort of lesser form of murder. It could be because the suicides close the cases and remove any possible continuing threat, Gierke said.

“If somebody doesn’t kill themselves after murdering another person, there’s a sense of fear for the rest of the community,” he said. “When that’s no longer a factor, we get to say ‘I’m safe. There’s nothing for me to worry about. It’s a problem that solved itself.’”

Mercurio-Sakwa also noted that a murder-suicide “almost adds a layer of sympathy for the person who committed the murder.” For outsiders, there’s also the lingering possibility that it could have been a mutually agreed course of action, he said. Again, that makes the murder easier to push aside.

But that’s not what happened in any of these cases, least of all the death of Cindi Wiley at the hands of her husband.

Kelly told me she and Cindi Wiley attended a conference together in Las Vegas for several days in December. At the time, looking out at the fountains of the Bellagio, Wiley said she wanted to leave her husband and had tried before, Kelly said.

“When we were talking in December, the whole time she was worried he was going to drive up there and check on her,” Kelly said. “She had not wanted to be with him for years, and he made her stay.”

Wiley protected her family members from the details of the problem and the plan, Kelly said. I reached out to several of Cindi Wiley’s family members, but they did not agree to answer my questions.

That moment of making the split is typically the most dangerous time for a person living with an abuser, Mercurio-Sakwa said. It’s more dangerous for women if their abusive or controlling partner has a gun, research shows.

But it’s possible to make a plan. And even friends or family members can start the process by calling the Emerge Center’s 24-hour hotline at 1-888-428-0101.

“Broadly speaking, what we want people to do is not keep quiet, not ignore it,” Mercurio-Sakwa said.

For neighbors on any street, that may mean calling the police even if you’re not sure you need to. Tucson police received two grants last year to help them address domestic violence.

And it could be that call will prevent the later shock of the sound of gunshots.

Happy Spring Equinox! We'll welcome the season with some wind today and light showers northeast of Tucson this afternoon.